This guide to those channels includes help for those who are having problems receiving some or all the new offerings.

The newest channels are

There are four main things that influence the results of a re-tune and whether you can receive these new channels:

1. Where you live
Check the table below (Channels per region). It shows what channels can be received in the various regions.

2. The age of your equipment
Most of the new channels use a new type of signal, called MPEG-4 that cannot be received on older equipment. Which channels use MPEG-4 can also vary from one area to another.

Check the table below. The MPEG-4 channels are highlighted in yellow. The channels with blue highlighted boxes can be received on all televisions.

A step by step guide for tuning older equipment is also provided below.

3. Foxtel
If you rely on Foxtel for all your TV, some or all of these channels may not be available. 7HD, 9HD and 10 HD are cable-only services shown on 207, 209 and 210 respectively. 7Flix is only available on Foxtel cable at this time.

However, if your Foxtel service does not include a channel you want to receive, you may be able to use a TV antenna to watch the new services. 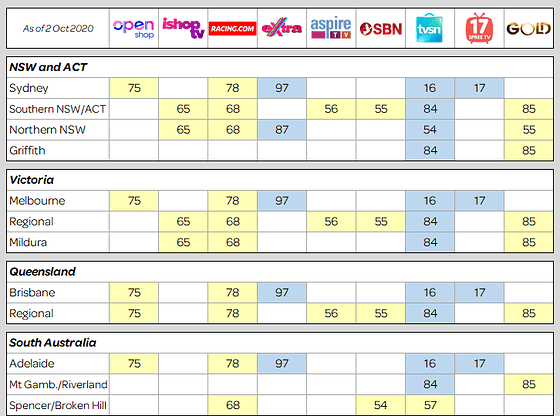 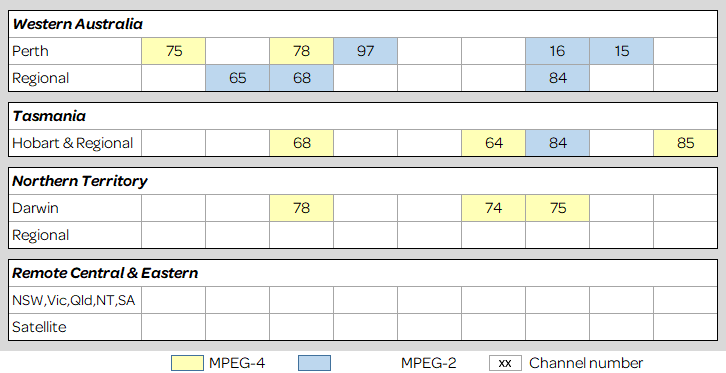 (Original table can be found here and here)

If you can receive NBN TV on digital channel 8 you should receive 9Life on 84 and SBS Food on 33.

If you can receive WIN TV on digital channel 8 you should be able to receive SBS Food on 33.

If you can receive the 9 Network on digital channel 5 you should be able to receive SBS Food on 33.

If you can receive the 10 Network on digital channel 5 you should be able to receive SBS Food on 33.

If you can receive the 7 Network on digital channel 6 you should be able to receive SBS Food on 33.

If you do not, you will need to recheck the instructions for tuning your television and try again.

Look for channel 78 - RACING.COM. Select and view that channel if possible.

Note: A limited number of models may be compatible but have the option to do so disabled. You can adjust the settings in certain models of 2009/2010 Panasonic sets via “Add MPEG-4 AVC Channels” in the menu. Some other brands may have similar settings available in their tuning options menu.

If my regional area is not listed a being a broadcast region for a new channel e.g., Prime, Imparja, etc, when will the new stations be available?
There is no information on when the broadcast of all stations will be extended at this stage.

When will Foxtel show all the new channels in my area?
Foxtel currently broadcasts SBS Food, 10 HD, 9HD, 7HD and 9Life to some but not all areas, depending on whether you have a cable or satellite connection. There is no information on other services at this stage.

Am I missing out on anything if I can’t watch these channels?
7flix, openshop, 9Life, 9Rush, 10 Shake, SBS Viceland HD, SBS World Movies HD and SBS Food all show new or different programming which is not available on existing older channels. The new HD channels 7HD, 7mate HD, 9HD, 9Gem HD, 10 HD, ABC TV HD and SBS HD show exactly the same programs as their SD equivalents. For example, 7HD shows the same programs as Channel 7.

Three new services are now available in Northern New South Wales provided by NBN. They are 9HD, 9Gem HD and 9Life. These are in addition to the original Channel 9, 9Gem and 9Go! services.

To enable us to provide the viewers with Full High Definition pictures, add new channels, as well as maintain our existing range of channels we will be using a newer technology called MPEG-4 to broadcast the High Definition Service on Channel 80.

All of the other services will be broadcast in the current technology we are using now, MPEG-2.

For FAQ for NBN viewers visit the NBN website

9Rush is not currently available in NBN areas.

The WIN Network broadcasts WIN HD and shows Network 10 programs on this service.

WIN HD uses MPEG-4 technology so will only be available on newer devices.

WIN TV viewers should check the WIN website if they are unsure of the services broadcast in their area.

10 Shake is not available on the WIN Network.

Note: WIN TV broadcasts Network 10 programs in many areas as well as services from Seven and Nine in others.

Information from the 7 network regarding 7flix can be found at 7flix Frequently Asked Questions (archived version) web page.

Update: When launched, 7flix broadcast in MPEG-4, so it could only be viewed on some televisions. It has now changed to MPEG-2 making it available on all televisions. The FAQs linked above have been updated to reflect this change.

More information on how to watch 10 HD can be found here.

Information for Nine in some WIN Network areas

The WIN Network operates Nine Network channels in some areas. 9HD, 9Life and 9Rush are not currently available.

ABC now provides the following channels in all markets:

ABC TV made the transition to high definition on 6 December 2016. Viewers with HD compatible TVs with MPEG-4 functionality can experience ABC TV in HD.

Viewers without an HD compatible television can still watch ABC TV in standard definition on channel 2 and 21.

ABC NEWS has changed from HD to SD (remaining on channel number 24). So viewers who previously couldn’t receive ABC NEWS because they didn’t have an HD TV set, will be able to watch ABC NEWS following the change in December.

You may need to re-tune your TV sets to be able to receive ABC TV HD and ABC NEWS.

SBS TV now provides the following channels in all markets:

Please refer to the information below about recent changes to the SBS TV broadcast.

SBS HD was previously available, but now I cannot see it. What happened?
In leveraging new technology to get the most of the spectrum available, SBS HD was upgraded to MPEG-4 on 8 April 2017. SBS VICELAND HD also launched at the same time. Viewers require a TV set, set top box, personal video recorder or PC tuner card that is MPEG-4 and HD compatible. Most TVs purchased from 2009 onwards should be compatible. See the SBS HD Upgrade FAQ for more information.

Have brought this over from the old forum so it can be updated as developments in this area occur.

Could we possibly have some suggestions for STBs, a Freeview box, a PVR from members? May be able to incorporate that information.

Just letting everyone know Foxtel via Optus Cable TV does not have One, Gem, Seven Mate, Nine Life, Eleven and SBS Food for some strange reasons. Can someone tell me why since I have Foxtel Via Optus Cable TV

Ring Optus, they will tell you something along the lines of it being their own infrastructure and they haven’t got to it. Optus only have some tens of thousands with Foxtel, it’s a shame as Optus has most developed, modern cable network.

Optus don’t run an exact set of the Foxtel channels, all are received via satellite to a Optus infrastructure in the three cities with cable and then they receive off air there the local FTA channels which are placed into their cable system.

Best you can do is email or write to Optus with your request.

What is Optus Email address that I could use? I have looked over at optus.com.au and I could not find one at all

What is Optus Email address that I could use? I have looked over at optus.com.au and I could not find one at all

Try completing the fields on this page to send an email.

Thought I might mention that if you have a Panasonic Vieira, from late 2009ish, and cannot pick up the channels, check channel settings and enable MPEG4.

Had this problem with my TV. Once enabled and completed a rescan all channels were picked up fine.

Thanks for that. I have a Panasonic Vieira from that era too. I’ll look for that setting.

Note: A limited number of models may be compatible but have the option to do so disabled. You can adjust the settings in certain models of 2009/2010 Panasonic sets via “Add MPEG-4 AVC Channels” in the menu. Some other brands may have similar settings available in their tuning options menu.

Any suggestions for changes or additions to this?

Any suggestions for changes or additions to this?

You could add that newer TV/STB firmware may be available on the manufacturer’s website.

Turns out my Panasonic Viera TX-32LKD70A is older than that, from Dec 2007. Can’t see anything relating to MPEG in the Picture/Setup menus. The manufacturer doesn’t seem to provide any firmware updates for anything before 2010.

Should be RACING.COM, but otherwise can’t see anything wrong with this!

Should be RACING.COM, but otherwise can’t see anything wrong with this!

What About Panasonic DVR’s? I can’t pick up any MPEG-4 on any of them.

A week ago I still had 74 in my channel list and now it’s disappeared. Normally my Panasonic would auto scan the new channels - 9Life, SBS Food Network. I am not sure if this would work in Seven’s favor if some of us can’t access their new station.

I get my TV from NBN, WIN, Prime, Imparja, Southern Cross etc. When will the stations be available?
NBN has advised that 9HD and 9Life will be available soon. There is no information on this for other areas at this stage.

Should we update this to say that WIN has added a placeholder on LCN-85/86 advising viewers that WIN HD and 9Life will be available soon?

Just letting everyone know Foxtel via Optus Cable TV does not have One, Gem, Seven Mate, Nine Life, Eleven and SBS Food for some strange reasons. Can someone tell me why since I have Foxtel Via Optus Cable TV

My Foxtel box doesn’t have most of those either. I can’t find a few of the digital channels in the guide including 7Mate, One, 9Life and I think Go!. I’m guessing I need to do something to retune it? It’s a bit annoying that I have to switch off foxtel and onto my other digital box every time I want to watch one of those channels.

Updated with information on WIN TV