It all does my head in! One minute 76 and 90 are on one tv or the other or both but with “no audio/video” messages, then they disappear never to be seen again! Then Ten HD pops up on channel 13 but says ‘no service’.

That’s what I had on my older set, when they made the changes. Then when you rescan, you will lose those MPEG4 channels completely.

6 posts were merged into an existing topic: Ten’s 4th channel

I have the same problem with my old set too. Didn’t experience this technical problem when 9Life was introduced. It seems like hard work for people like me (who’s hopeless with technology) to connect to 76. Hopefully, my old set will automatically trace this channel back into my list.

I have a similat problem, but with a twist…

I use a Panasonic DMR-XW350 DVR and had no problems viewing and recording MPEG-4 transmissions after adding them after getting the message that a new channel was available. About a month ago I received the new channel message and allowed it to be added. The name was “New Channel”.

Then about 2 weeks ago transmissions started on this channel but I found I could not record it, the record light just kept flashing. After phoning Panasonic they told me this was a known problem and was caused by tne incorrect channel name. They told me that retuning would correct the problem, so that’s what I did.

Before retuning I could watch the channel without a problem, it was in fact 7flix. Since retuning ALL the MPEG-4 channels have disappeared and nothing I do brings them back. I have tried retuning a number of times, tried to add them manually but no luck. This morning I received the new channel message and RACING.COM is back but none of the others. Any suggestions?

I have a similat problem, but with a twist…

I use a Panasonic DMR-XW350 DVR and had no problems viewing and recording MPEG-4 transmissions after adding them after getting the message that a new channel was available.

Hi Robert, What were the original MPEG-4 TV channels that you had no problem viewing and recording?

The above article has been updated to reflect the completion of the current known roll out of new services.

A “Channel Grid” has been added to show the new channels per region and whether MPEG4 is used.

My TVs and recorders will not display the MPEG4 video of 7flix etc, but I have found that my recorder will actually record the signal correctly and then I can replay OK. Give that a try if you have the same problem

Hi, I’m wondering why I cant get any WIN / Channel 9 on my TV…I do have foxtel i get win on there…on my TV just via aerial i can get 7 flix but not 9 life…is there a difference? my TV has no channel 9 channels at all. Just wondering what i need to do to fix that?

Most likely a problem somewhere in the antenna system. If you cannot receive all the Channel 9 services on the TV but can gen other channels, you need to look at the antenna, cabling from antenna to the TV and/or any amplifier on the antenna.

9HD, 10HD, 7flix and 9life are the ones I had been able to view but are now missing. Rackng.com seemed to come back by itself.

Article update to include 7HD in the channel grid and text. Might need a bit more work.

Article update to include 7HD in the channel grid and text. Might need a bit more work.

Even though the LCN name is “7HD [City]” everywhere (to the best of my understanding), technically it would only be Seven HD in Melbourne and Adelaide while Sydney, Brisbane and Perth receive 7mate HD.

Although Seven themselves haven’t released very much info about the recent change, have they?

Becasue of that I wasn’t sure how to approach it in the article. I initially thought that 7HD and 7Mate HD could be listed separately but I went with using the LCN title used on 70 as 7HD in all markets as that is the channel that viewers might be seeking help to tune in.

Happy to receive feed back, suggestion for a better approach though.

For example. This is the grid above 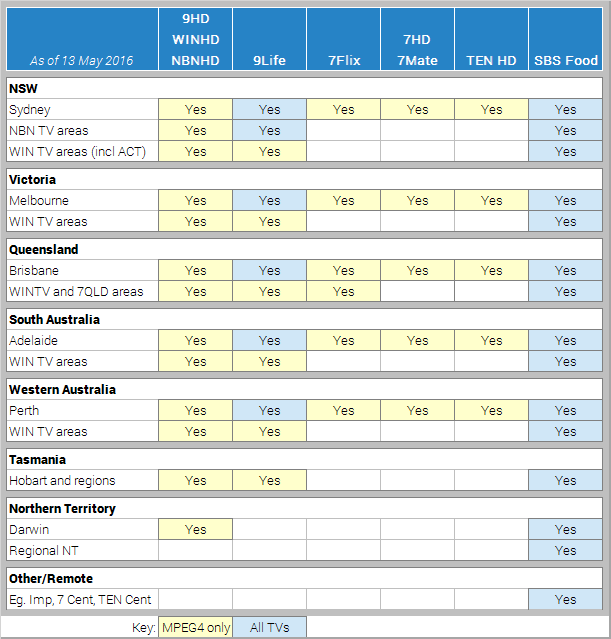 What would be a better way of showing this? Perhaps? 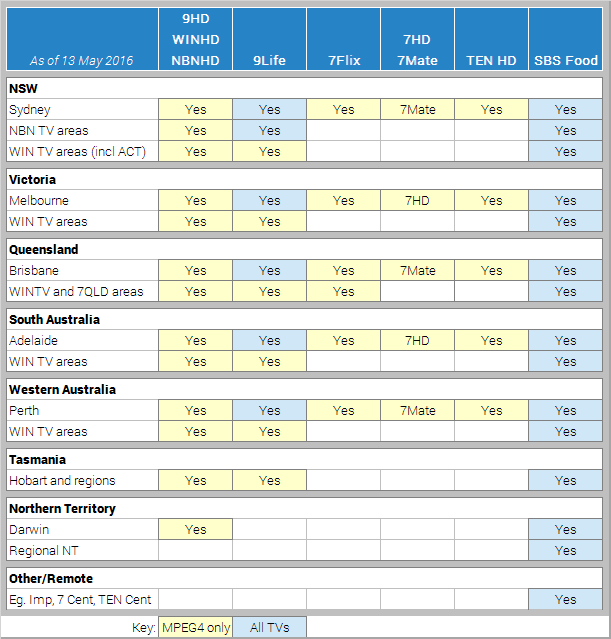 Personally, I think specifically listing which cities get Seven HD and which ones get 7mate HD is a great idea!

Number two! (Should have had a poll)