Rather than piggyback off the Carols in the Domain discussion or post in the Seven On-Air Presentation topic (that is only part of it), I thought it’d be better if Adelaide’s carols had its own thread. There are some details scattered around Media Spy over the years, so I’ll provide a bit of a recap below.

Seven Adelaide are a long-term sponsor of Adelaide’s Carols, even in the years that this event wasn’t broadcast (aside from highlights played on 7 News). Since 2014, it would appear it is Seven’s intention to broadcast this event in South Australia (and later, nationally). For those not in Adelaide, this event was broadcast live in 2014, but there were a number of issues including a long awkward delay at the start of the concert (see the video below). The hosts were Jane Doyle (7 News), John Riddell (7 News), and Rosanna Mangiarelli (Today Tonight) 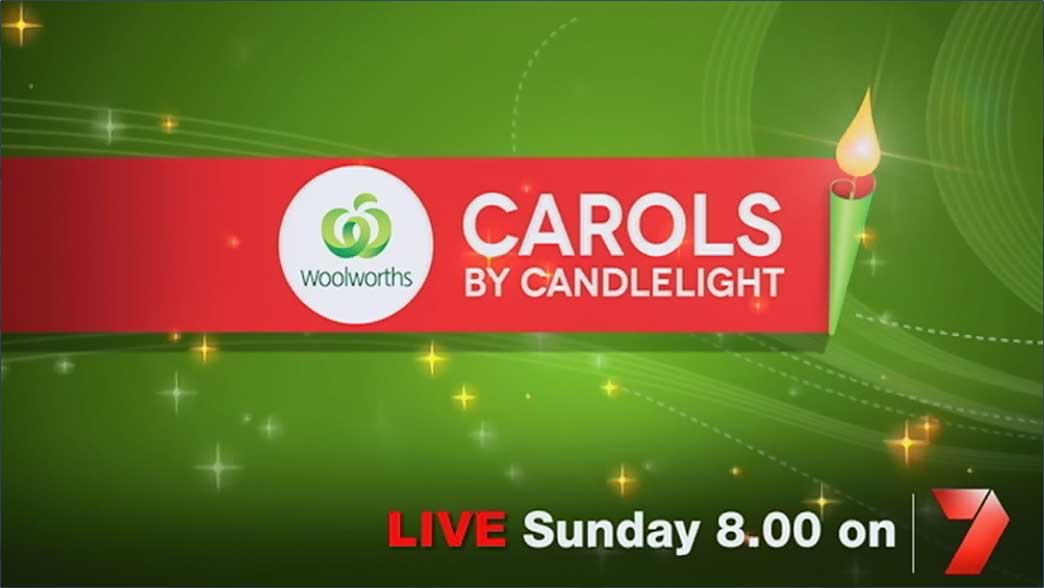 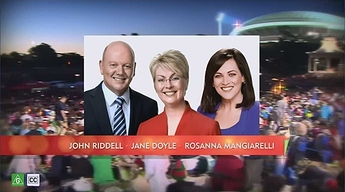 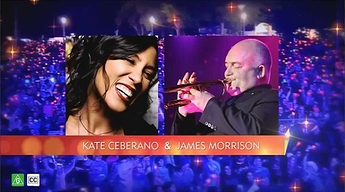 In 2015 it wasn’t broadcast (thankfully! As I was singled out in the crowd and interviewed… awkward

). Although, there was a television-like opening animation played at the event, so maybe Seven pulled the pin on the broadcast (just speculating

In 2016, this event was taped for broadcast the following night on 7 and 7HD in Adelaide and a later national replay on 7two. The Christmas Network (activeTV) now run the television side of things, who also do Sydney’s Carols in the Domain. The musical director changed from Bruce Raymond, who has previously taken on this role for as long as I can remember, to Graeme Press (Carols in the Domain). Rosanna Mangiarelli (Today Tonight), Mark Soderstrom (7 News Sport) and Amelia Mulcahy (7 News Weather) hosted the event. Tim Noonan was seen around the park during the day with a camera crew, recording messages for playback on the outdoor screens before the main concert (sorry for the crappy photo):

Last night Adelaide’s Carols by Candlelight was broadcast on 7 Adelaide, only the second time in recent memory. For years, 7 stopped showing this annual event other than a short clip in the 6pm news until 2014 when they attempted to broadcast it live. There were many technical issues with the live broadcast, so I don’t blame them for not giving it another go last year.

This year, (2016) the 2 hour concert was recorded one day prior to the broadcast. It was edited down to fit into a 2 hour block with ads. The Christmas Network was brought in who also do Carols in the Domain (an activeTV brand if I’m not mistaken?) and, being in the crowd, I did notice a higher presence of television cameras (both fixed and roaming), more creative angles and a mammoth autocue like at The Domain. The broadcast graphics had sponsor logos on a bauble going into a break just like Sydney has done for years.

The first couple of pics aren’t from the broadcast (though that should be obvious!) 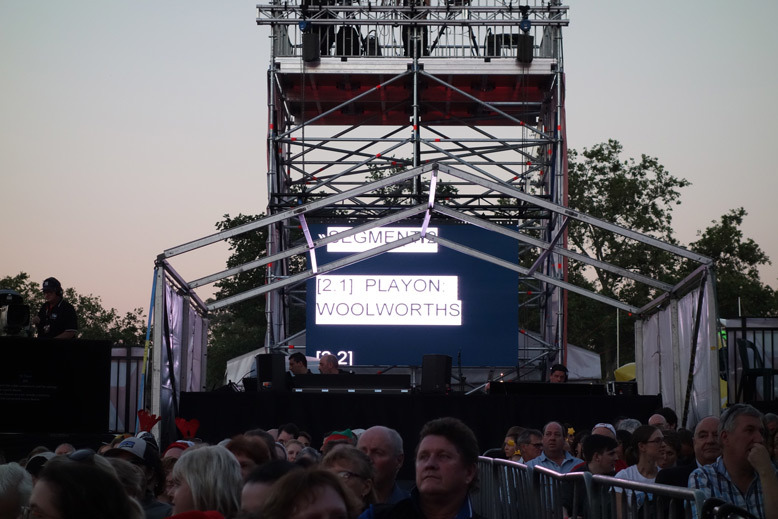 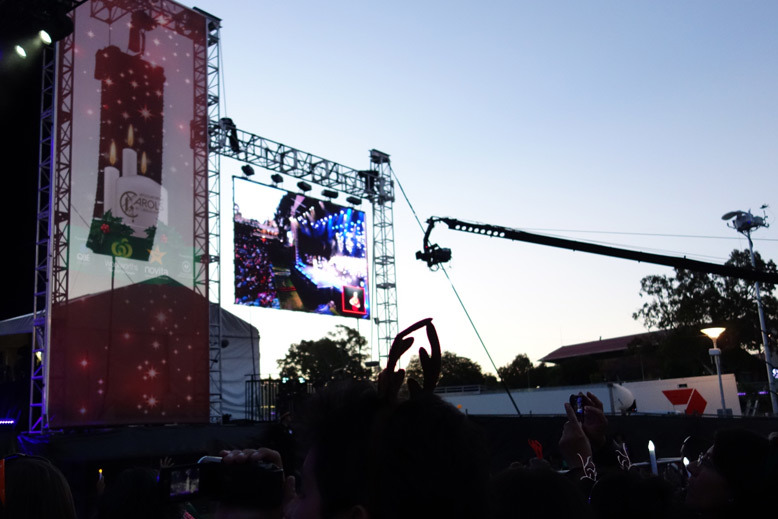 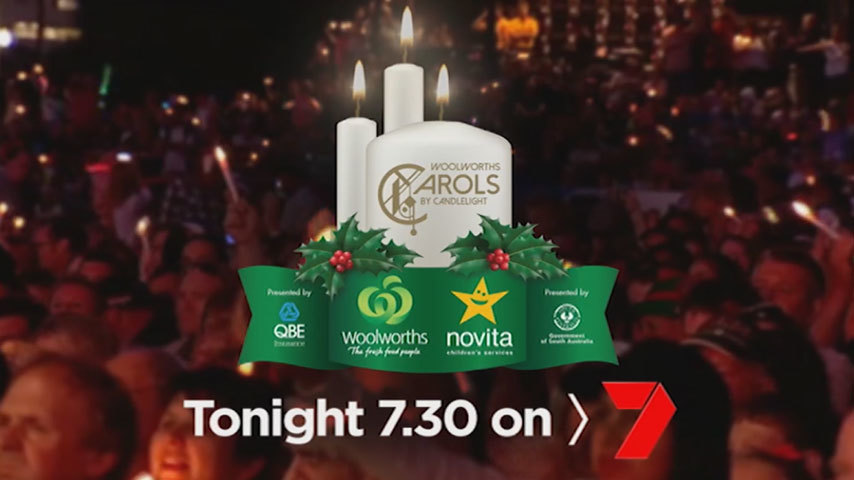 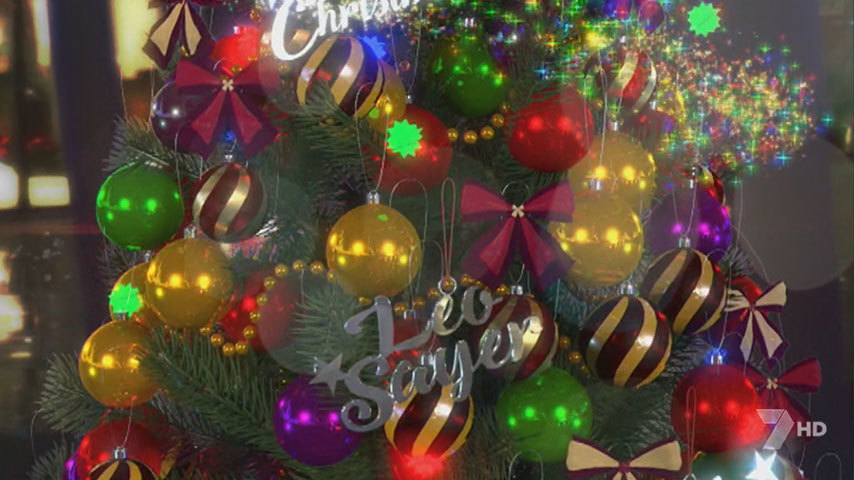 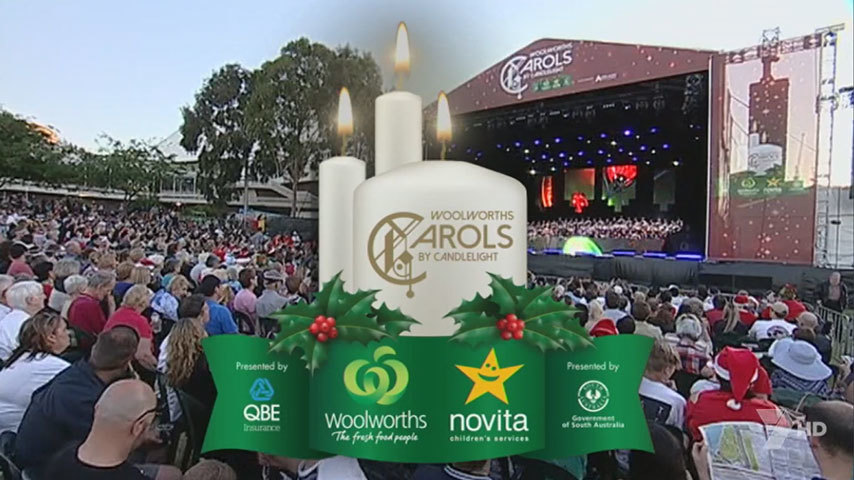 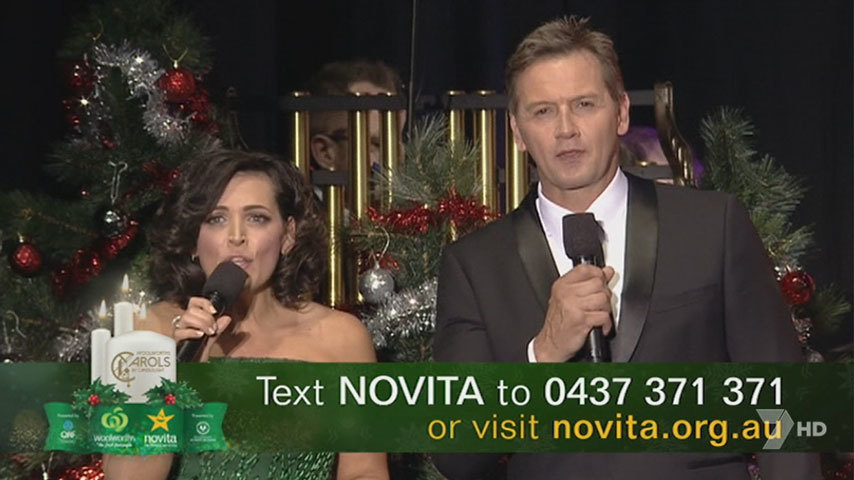 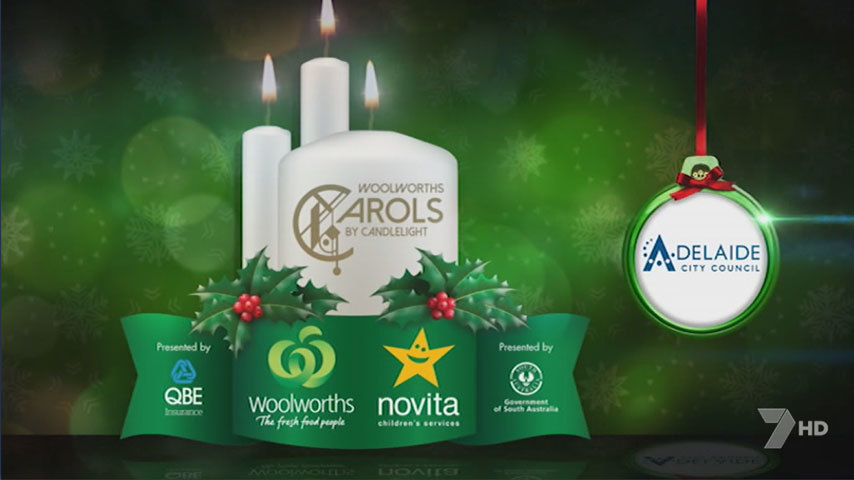 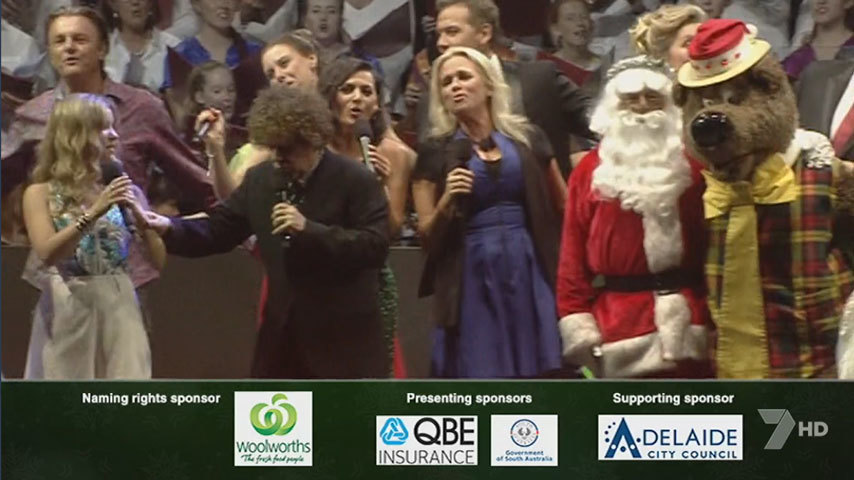 This year, the arrangement is the same as 2016 with a delayed 7/7HD television broadcast and 7two replay(s). So I assume this will now be an annual broadcast, hence this topic

(post split as it was starting to get a bit long!)

Who's getting excited for #CarolsByCandlelight this Sunday?!?!? 🎄🎅🎁 Held in Elder Park, the QBE Insurance Carols by Candlelight has a HUGE line up this year, including Dami Im, Samantha Jade, Taylor...

This year’s event will take place this Sunday (December 10), with a Monday television broadcast in South Australia on 7 and 7HD, and a (presumably national) replay on 7two later in the month.

How does this rate in Adelaide compared to the Christmas Eve Melbourne version?

Last year the Adelaide version rated lower than the national one.

Mind you, Adelaide’s isn’t really a televised ‘tradition’ at the moment. This event wasn’t broadcast between the early 2000s to 2013 (I have an old VHS with 2000 Adelaide carols), and nothing again for 2015. Even if it were broadcast every year, it would be pretty hard to match Melbourne’s version due to the Christmas Eve factor, IMO.

I haven’t seen that many promos for the Monday broadcast this year, so this doesn’t help. There was a plug for the event itself (not the Monday TV broadcast) during various 7 News weather crosses in 4pm and 6pm Friday bulletins and evening updates, though: 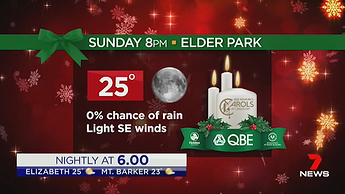 After our coldest start to summer since 1969 we are finally starting to warm up and it looks particularly promising for @adelaidecarols. @AmeliaMulcahy7 will have the full 7-day weather forecast in 7 News at 6pm. #7News https://t.co/deYNglYX3n

Why don’t they broadcast it live?

Really not sure! Maybe CH7 doesn’t allocate enough time for the broadcast? Last year, a number of songs were cut out of what was televised the following day. Channel 7 tried a live broadcast in 2014 and there were a number of issues, and the concert was shorter. With The Christmas Network (activeTV) onboard since last year, maybe they should try to do it live again just as they do with Carols in the Domain. That said, I’m happy that they broadcast it at all

Here’s a 2017 promo for the Monday TV broadcast:

While Adelaide saw the carols broadcast on Monday, December 11, all of Australia can watch it on 7TWO on December 24 at 3 pm (source: Foxtel guide).

There were a couple of retakes on December 10, such as the host introduction after the first song… apparently they were using the wrong set of microphones. Mary’s Boy Child and the subsequent TV broadcast outro were reshot as well, as Dami Im missed the cue to start singing. I don’t think anyone in the crowd minded though with another chance to sing along!

The opening animation is basically the same as last year with the artists names on a Christmas tree, although the background is red now: 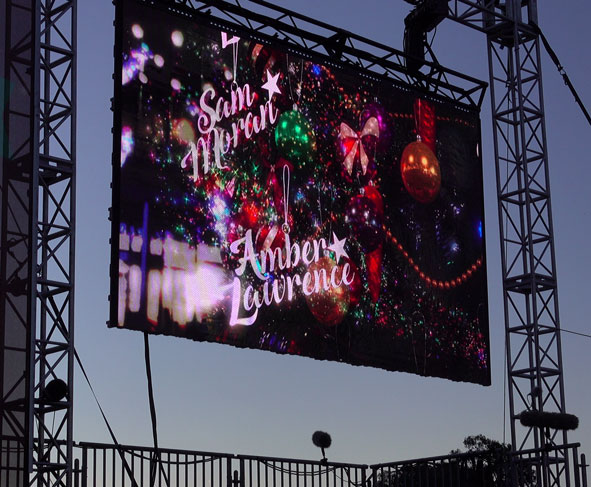 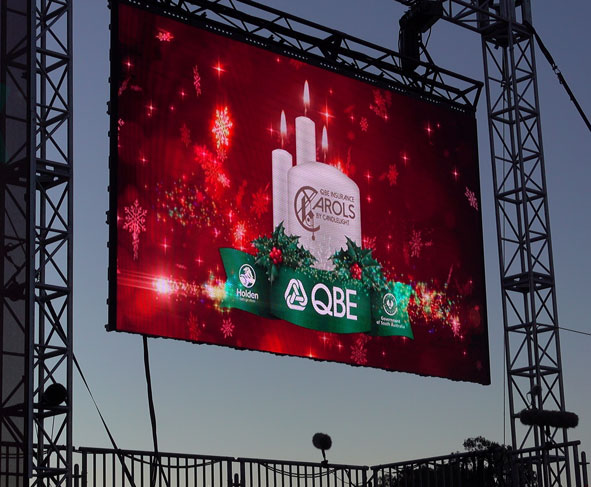 It was pretty cool being in the front row this year! There was a fixed camera at the rear of the stage pointed at the crowd. The audience was also set back a little bit further as there was a camera crew roaming around in front of the stage. Real candles have made a return after years of battery-operated led versions, even with the a similiar (probably identical!) red candle holder as is seen on Carols in the Domain. 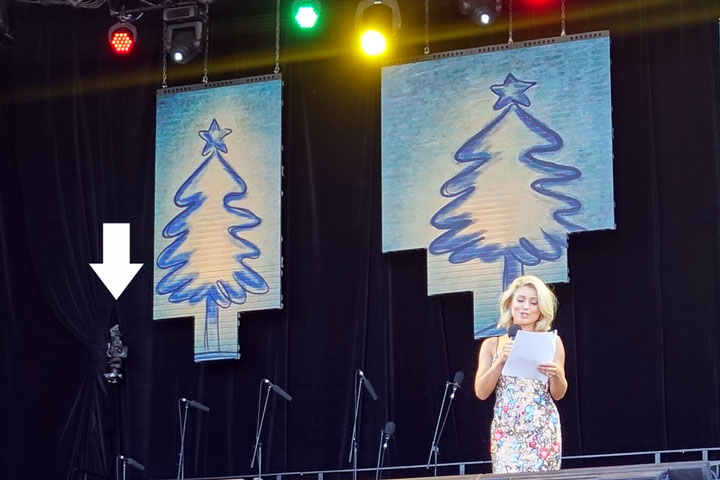 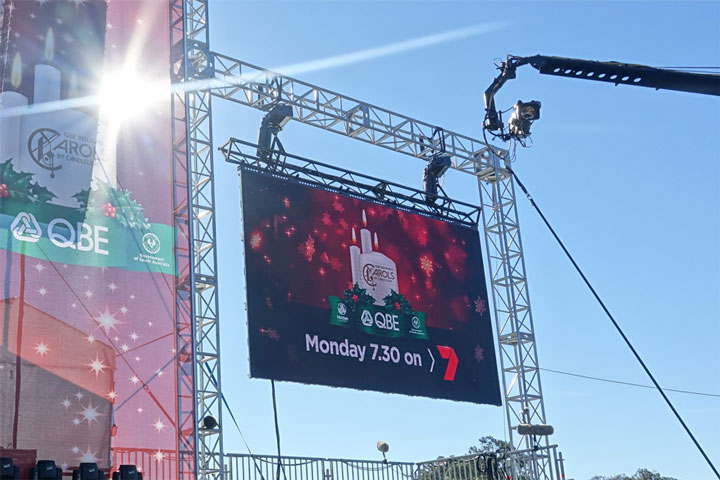 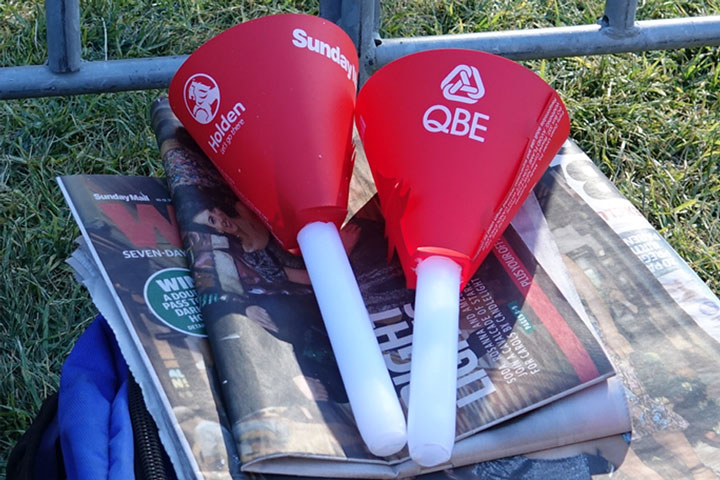 I put together some random clips from the crowd, such as what happens in the commercial breaks (and sorry for the unsteady camera at times… it is rather difficult to keep it still and hold a lit candle at the same time

Adelaide’s carols is available on 7plus now, or you can catch it nationally on 7TWO from 3pm on Christmas Eve (followed by a Carols in the Domain replay).

Adelaide’s Carols by Candlelight will this year take place on a Saturday night, December 15:
https://www.facebook.com/adelaidecarols/videos/10156527932548482/

Looks like we’re following suit with Carols in the Domain’s move (back) to Saturday:

Carols in the Domain Seven Network

The 2018 event will be held on Saturday night, December 22. The date was revealed on Carols in the Domain FB page this morning.

For as long as I can remember, our Carols have traditionally occurred on a Sunday even when Carols in the Domain used to take place on a Saturday.

It will be interesting to see whether the night will be taped for a Monday night broadcast (like last year) or if it will be broadcast live in SA.

The concert will actually take place from 8:15 pm to 10:30 pm on Saturday, 15 December. The event does pause during ‘breaks’ but I wouldn’t be surprised if a song or two are chopped from the televised version. I assume these carols will be shown nationally on 7TWO closer to Christmas.

The winner of an Adelaide ‘search for a Christmas Star’ competition will also take to the stage this year - Scarlett Anthony, 19.
https://www.adelaidenow.com.au/news/south-australia/scarlett-anthony-19-is-winner-of-the-otr-search-for-a-christmas-star-and-will-sing-at-the-qbe-insurance-carols-by-candlelight-in-adelaide-on-december-15/news-story/395964f1ecd57324e57fbc3f92ba2c3e

Hmm, looks like Samantha Jade, Paulini and Isaiah Firebrace (at least) will be appearing at both the Adelaide & Sydney carols events.

Tonight’s SA carols broadcast has been shifted forward to 7pm, straight after a 1 hour 7 News bulletin.

The promo below aired prior to the time change:

Last week, there was also a spot on Today Tonight with the search for the Christmas Star competition winner:

As far as the carols themselves, from a live crowd point of view the 2018 production felt tighter. New this year was a secondary presentation area in the crowd where Rosanna, Amelia and Mark introduced a number of artists from. This left the main stage free for the artists to walk on & prepare.

Here’s a bit of a teaser I recorded from the crowd… starting with a soundcheck of the orchestra and choir. PS: Remember to look up before standing in case the crane camera is above head

Adelaide’s 2019 Carols by Candlelight will take place this Saturday evening. It’ll be broadcast on Channel 7 Adelaide one day later, from 7:00 pm Sunday. According to the EPG, the televised version will run for 128 minutes (with ads), ending at 9:08 pm.

This year’s line up (in no particular order) includes:

Saw this video tweet by Rachael Leahcar this evening. She performs at the event almost every year.

Join us at @adelaidecarols next to the lovely River Torrens at Elder Park THIS SATURDAY! Rides and Food from 2pm Pre-Show entertainment from 5pm *Main Event at 8.15pm* #TorrensTransitCarolsByCandlelight https://t.co/Ih2nzXEhFw
1 Like
JohnsonTV December 8, 2019, 8:34am #17

If you are outside South Australia, the carols event is being simulcast on a pop-up channel at 7plus from 7.30pm to 9.25pm AEDT today.

Some caps of the Carols from the replay today:

Thanks for sharing caps of the carols broadcast

I took some of my own (random) photos at Adelaide’s carols and a few of them seem worth sharing.

Elder Park during the day and carols broadcast advertisement on the outdoor screens: 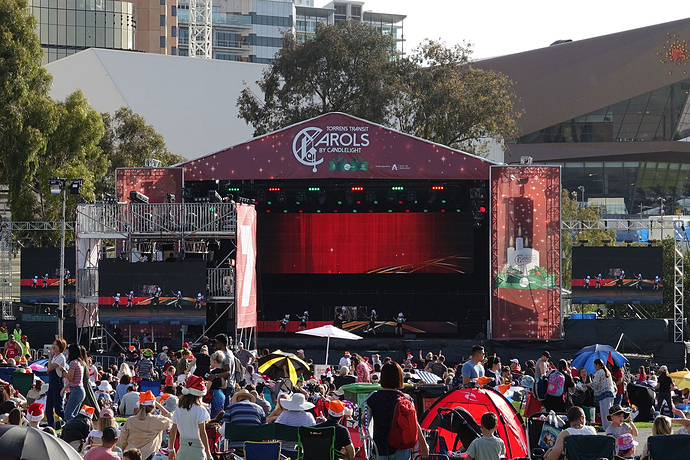 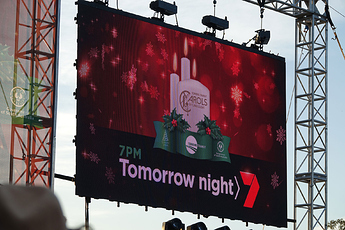 Secondary presentation area (well, the back of it!): 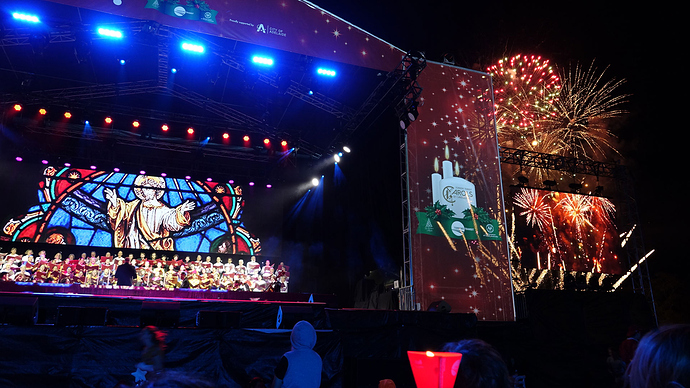 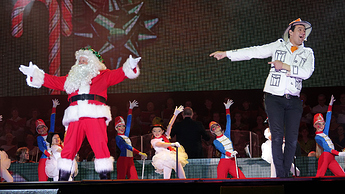 Carols by Candlelight at Elder Park cancelled - but you'll still be able to...

Here's how Channel 7 will be bringing the Christmas magic to you in 2020.

The Carols by Candlelight, held at Elder Park each December since 1944, has unfortunately become a casualty of COVID-19. 7news.link/3m85PKZ @AndreaLNicolas #7NEWS https://t.co/IItSm1TsMx
1 Like
Carols in the Domain
JohnsonTV November 20, 2021, 11:41pm #21

For the second year in a row, Carols by Candlelight will be held as a virtual event. Novita CEO Greg Ward said the event could not be held at Elder Park due the impact of the pandemic and restrictions on large gatherings preventing it running in its traditional form, following “comprehensive discussions” with SA Health.

The virtual event will be hosted by 7News presenters Mark Soderstrom, Rosanna Mangiarelli and Amelia Mulcahy and broadcast on Seven in Adelaide on December 12.

UPDATE12/12: the virtual event, sponsored by Kangaroo Island ferry company Sealink, will now be shown on 7TWO in South Australia at 7pm tonight. In other states however it will air on 7TWO at the earlier time of 4.30pm today.
The special will also be available on 7plus.