For discussion of the upcoming 50th anniversary of the spaceflight that landed the first two people on the moon.

Very rare to find news footage from Australian media but I’ll try. Hopefully the NSFA has some

There are three upcoming programs announced so far to celebrate the anniversary of the Apollo 11 moon landing on 21 July.

Stargazing: Moon and Beyond 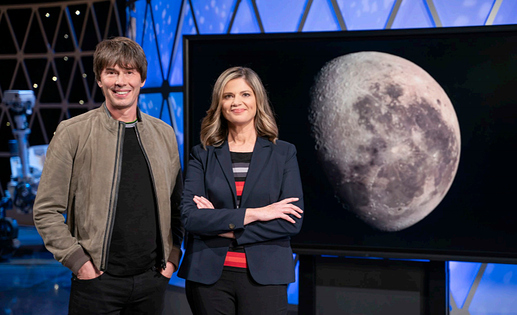 Stargazing returns for a very special edition on the 50th anniversary of the Apollo moon landing mission. Professor Brian Cox and Julia Zemiro will be back with a lively, funpacked hour of television.

Brian meets Apollo legend General Charlie Duke to hear first-hand how he guided Neil Armstrong and Buzz Aldrin to the lunar surface from mission control and what it felt like to ride on the most powerful rocket ever built. Stargazing’s ‘Space Gandalf’ Greg Quicke explores one of the world’s largest tides to discover why we need the moon. And Professor Tamara Davis investigates what it takes to escape earth’s gravity.

We find out about the pivotal role Australia played in bringing Neil Armstrong’s giant leap to television screens across the globe and meet one of the men who made it happen – engineer Mike Dinn. And the head of Australia’s brand new space agency, Dr Megan Clark, is in the studio to tell us what the future holds for the Australian space race.

And could the first person on Mars be an Australian? Dr Paul Scully-Power, the first Australian in space, talks about his own experiences as we explore the qualities needed to become an astronaut of the future. A group of young Australians who all want to step foot on the red planet demonstrate how mental acuity, dexterity and leadership are crucial skills for survival in the harsh vacuum of space

Fly Me to The Moon 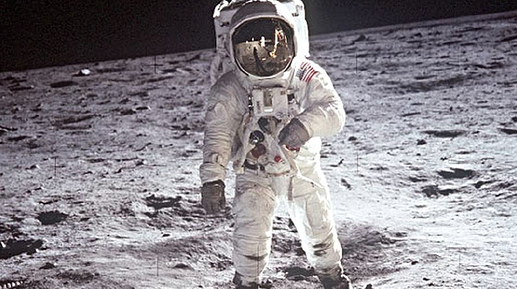 Narrated by John Barron, Fly Me to the Moon features interviews with prominent Australians as they reflect on this triumph of human achievement, and also examine the role played by scientists down under as they helped with the landing and broadcast of the historic occasion.

Tapping into the treasure trove of the ABC’s archives, the documentary will broadcast footage not seen since that momentous day, and document the aftermath as the famed Apollo 11 astronauts made their way around our nation on a victory tour.

Australia’s only three astronauts, Dr Philip Chapman, Dr Paul Scully-Power, and Dr Andy Thomas, will be brought together for the first time to describe how their lives have been inspired and defined by this historic moment in time, and what it was like to work for NASA during the Apollo missions and in the decades since.

More than 500 million TV viewers around the world watched the spacecraft touchdown on the lunar surface, a moment that remains the most watched TV event in history - but it almost didn’t happen. Former scientists from the Honeysuckle Creek Tracking Station will describe the pressure they felt as the world’s eyes turned to them for the first images of this magnificent achievement.

The space race not only came at a time of significant cultural change in Australian life, but also as new battle lines were being drawn in the cold war. Former Australian Prime Minister John Howard will recount this turbulent time in our political history, and how the space race became a proxy for international tensions.

The documentary will examine the legacy of the space exploration, and the impact it had on Australian culture. With the recent launch of the Australian Space Agency, the program will also look ahead to the future, to speculate when mankind might make that giant leap once again.

The Day We Walked On The Moon

The Day We Walked On The Moon tells the dramatic story of how astronauts Neil Armstrong and Buzz Aldrin got there, from the perspective of key figures in and around the Apollo 11 mission.

Over 400,000 people played a part in realising the goal set by President Kennedy in 1961 in just eight years. Three of the key figures in Mission Control, iconic Flight Director Gene Kranz, Capsule Communicator Charles Duke and Guidance Officer Steve Bales, explain just how close Apollo 11 came to failure at a number of points during its hazardous descent to the lunar surface.

Astronaut Frank Borman, commander of Apollo 8, was NASA’s liaison in the White House on the day. Along with President Nixon’s executive assistant, Dwight Chapin, he takes us inside the Oval Office to look at how they prepared the American leader for disaster, including the possibility that command module pilot Michael Collins would have to leave Armstrong and Aldrin behind on the Moon. Chapin and Borman also discuss why the Moon landing was so much more than a scientific achievement for America and its President, in an era dominated by assassinations and an unpopular war.

Meanwhile, recalling their time growing up in so-called “Togethersville”, the cluster of Houston neighbourhoods that were home to America’s astronauts and their families, Andy Aldrin, son of Buzz, and Rick & Mark Armstrong, sons of Neil, tell us what it was like for the wives and children as they nervously listened in to NASA’s radio feed. The Armstrongs, just 12 and 6 at the time, describe how their father sat them down before his departure to warn them just how dangerous his mission might be.

Further perspectives come from latter day astronaut Mike Massimino, an entranced 6 year old at the time, Professor Brian Cox and astrophysicist and Queen guitarist Brian May, each of whom see the Apollo 11 mission as an influence on the shape of their own future careers. From the Mission Control press room, journalist Adam Raphael and CBS newscaster David Schoumacher recall what it was like reporting the biggest story of their lives.

The Day We Walked On The Moon is the story of what, 50 years on, remains one of humanity’s greatest achievements - a moment etched in the minds of the 600m people who watched it around the world on live TV.

Today, the broadcast recorded in Australia, has been donated to the National Film and Sound Archive of Australia 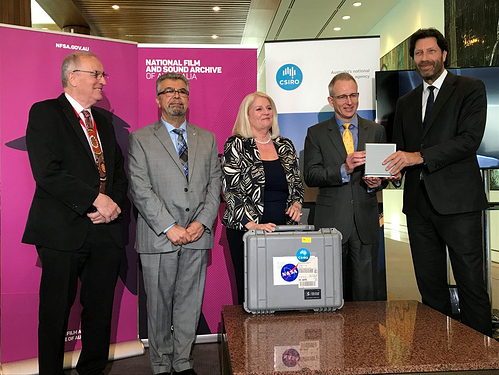 NASA gifted the only official copy of the footage held outside of the United States to CSIRO, Australia’s national science agency, in recognition of Australia’s crucial role supporting the Apollo 11 mission.

To mark the anniversary, a new digitally restored version of Australia’s official copy of the broadcast was today donated by The Hon Karen Andrews MP, Minister for Industry, Science and Technology, to The Hon Paul Fletcher MP, Minister for Communications, Cyber Safety and The Arts at an event at Parliament House.

For the first nine minutes of the broadcast, NASA switched from Goldstone to the signals from Honeysuckle Creek – the latter capturing the first foot-step on the Moon.

The strong signal being received by CSIRO’s Parkes radio telescope - with its large surface area and sensitive technology – was then used to share the remainder of the two-and-a-half-hour broadcast with the world.

Vision of the moonwalk was transmitted via a 66cm radio dish on top of the lunar module that used just 20 watts of power – the same energy output as two LED light bulbs.

The faint signals then travelled 384,000 kilometres to Earth where they were received and converted to a signal normal TVs could receive.

Decades later, NASA worked with Hollywood film restoration specialists to enhance the footage, which is now included in the collection of the National Film and Sound Archive of Australia, ensuring its ongoing preservation.

As the 50th anniversary of the Apollo 11 Moon landing approaches on 21 July, CSIRO and the National Film and Sound Archive of Australia have ensured the original TV broadcast will be preserved for future generations. As the 50th anniversary of the world’s first moon landing approaches, it has been revealed a NASA bungle co...

The original video recordings made the news tonight.

10 have a special super and NASA TV’s 50 year watermark was also seen. 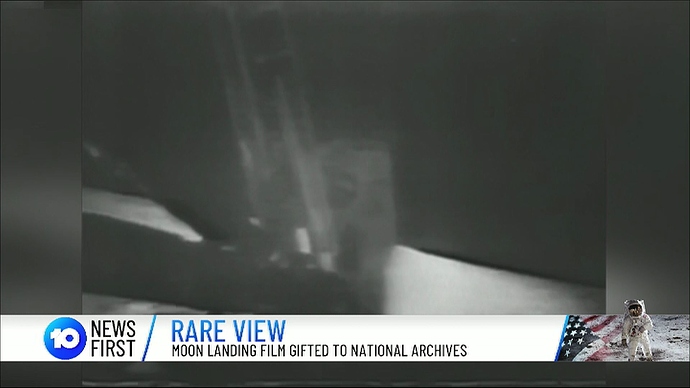 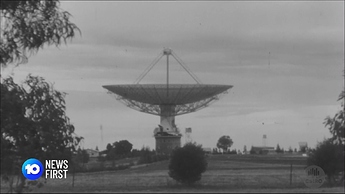 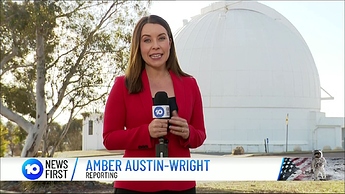 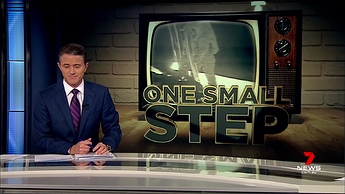 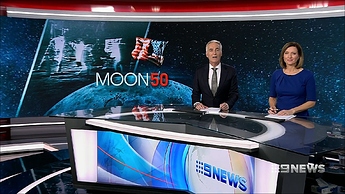 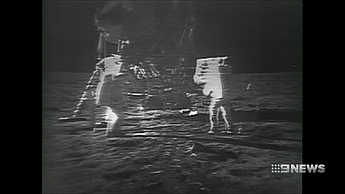 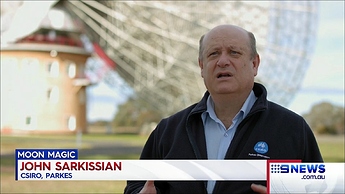 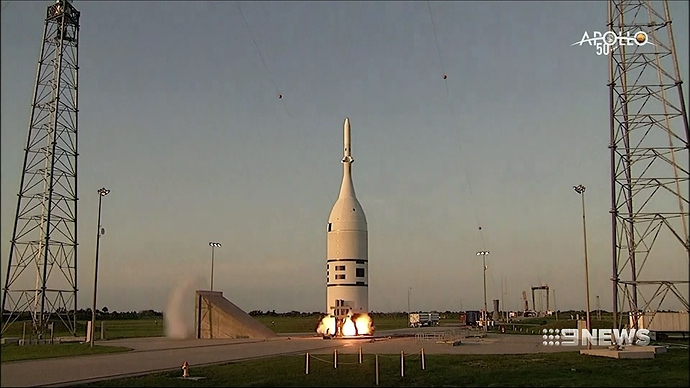 ATV 0 couldn’t be bothered to televise the lift off live while GTV 9 was going all out and sent a news team over to report and present special programming from from Cape Kennedy. 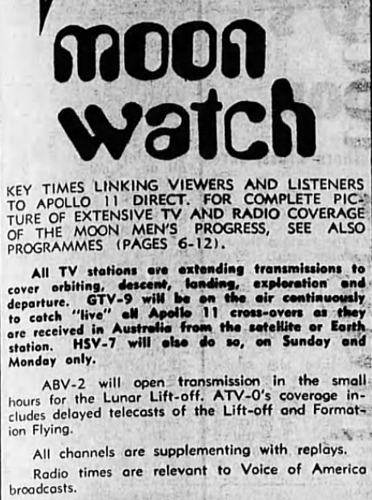 There is a long standing conspiracy that Stanley Kubrick shot the Moon landings in Nevada, and that Man has never gone to the Moon. If say the conspiracy was true, where then would Stanley Kubrick’s original films be. Area 51?

I’m waiting for one of the networks to pick up a nutjob’s docos on how the moon landing was faked.

Program on 10 on Saturday 20 July a 1 hour documentary followed by The Dish.

The promo for the Fly Me To The Moon doco -

Here's a sneak peak at our Apollo 11 50th anniversary special "Fly Me to the Moon" premiering July 16th. All three Australian astronauts, plus politicians, entertainers and more share their memories of July 1969. https://t.co/VzgEj5aooN
1 Like
TV.Cynic July 13, 2019, 10:28am #13

Tonight’s special on Nine contained a short segment from 9 News Melbourne featuring Eric Pearce reporting on the progress of the mission on Day 2. 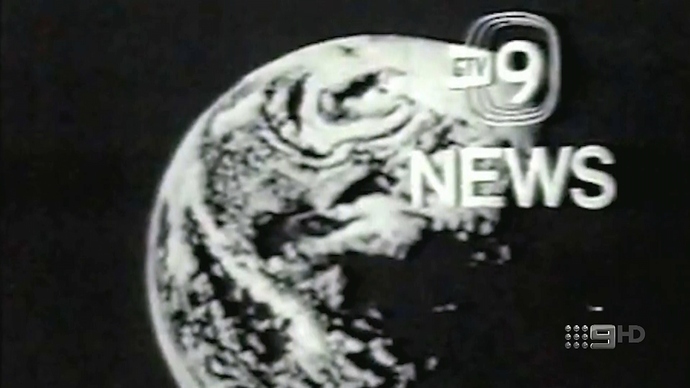 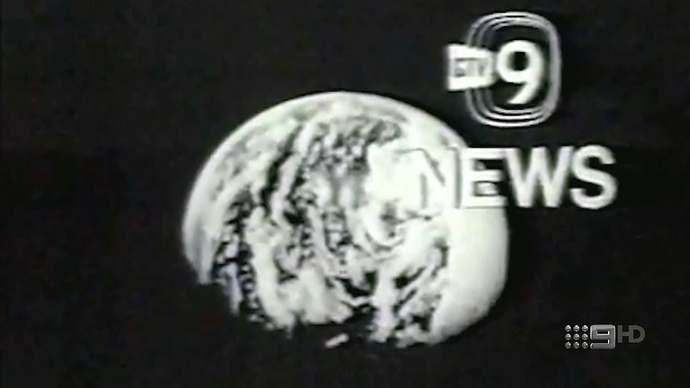 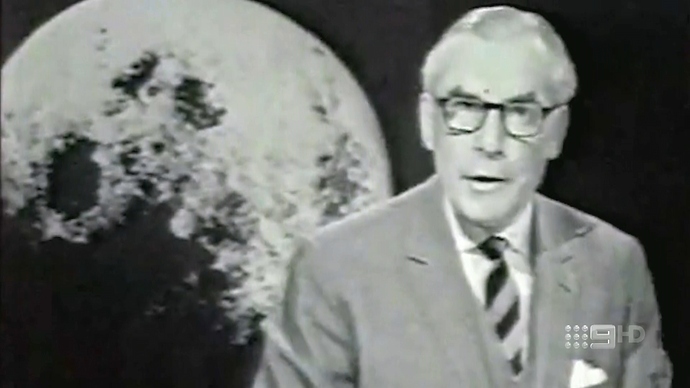 I know this thread is in the TV History section but there is some interesting radio coverage from Apollo 11, 50 years ago, preserved on a tape bought in an op shop. Featuring mostly coverage from ABC radio but also includes snippets from commercial stations including 3DB, 3UZ, 3AW (Macquarie) and 3KZ:

Some reviews of Nine’s special on Saturday. 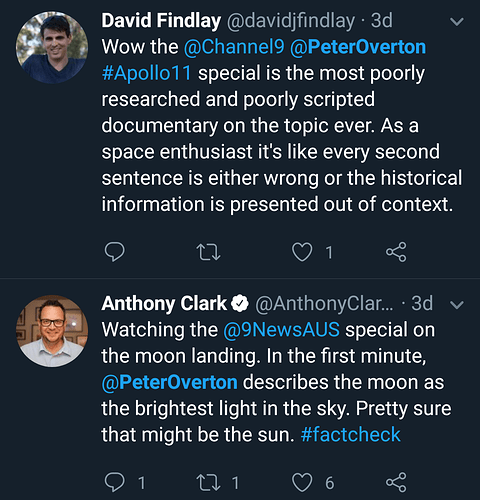 The ABC special last night seemed to be similar to the 9 one in that it was chock full of unique archival material. Haven’t seen the reviews so not sure whether people thought it was better researched though
iview here: https://iview.abc.net.au/show/fly-me-to-the-moon

I’ve kept very little from my childhood. Except these for some reason. And they’re in great condition 50 years on. Unlike me 🌙 #manonthemoon #moon #MoonLanding50 https://t.co/jUd0x0Cvaj 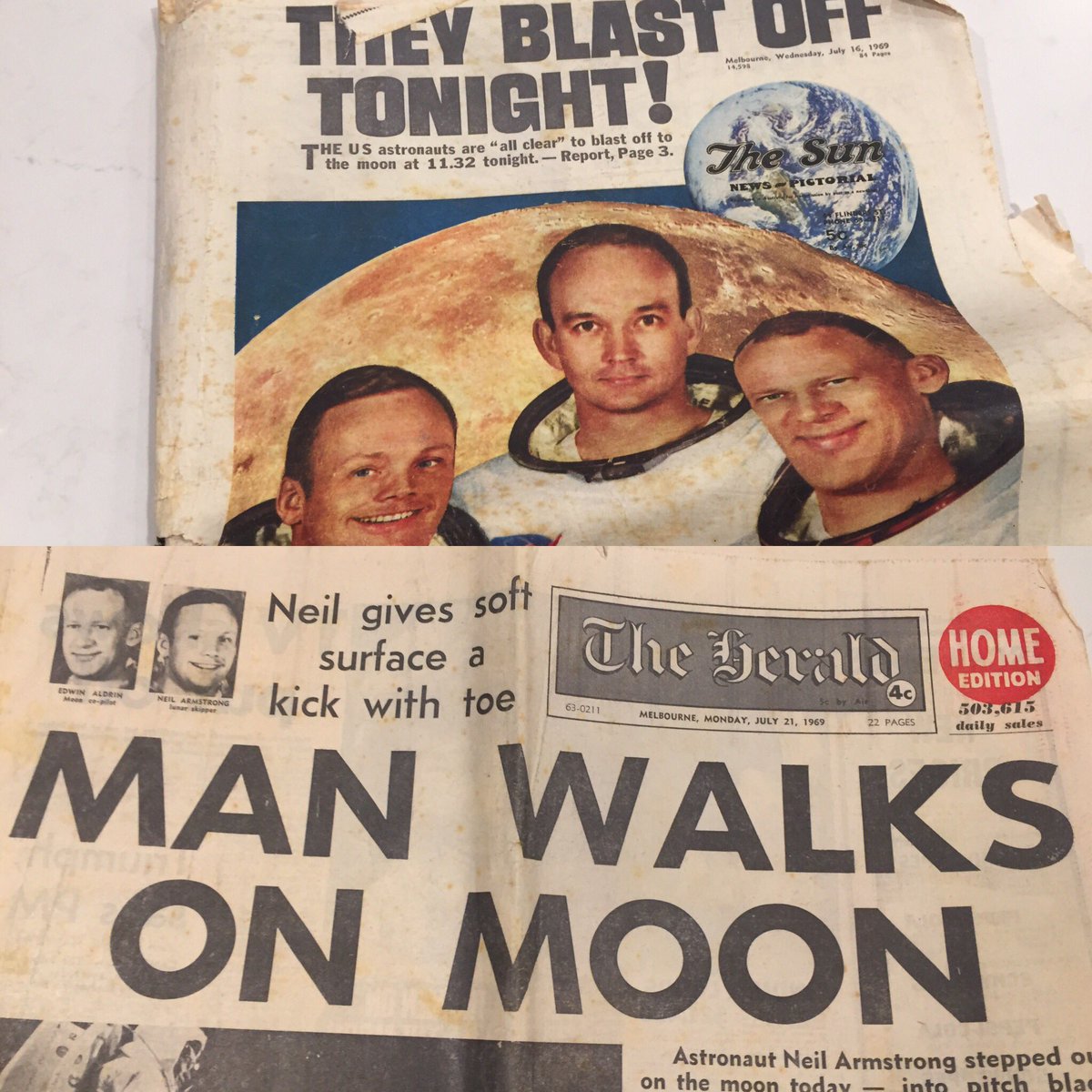 A couple of screen grabs from ABC’s Fly Me to the Moon that caught my eye. 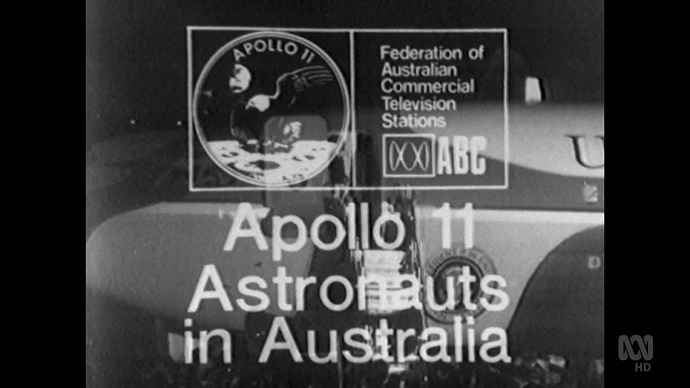 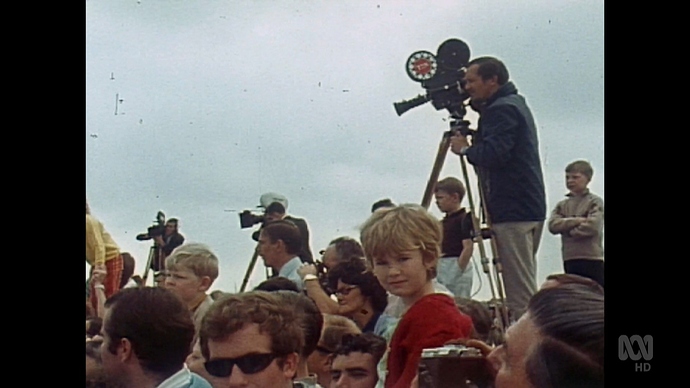