Nova 106.9 sounded the best in its first few years IMO, from 2005-2009, when it was rating in the 18s in Brisbane. Whippy did a great job as music director and announcer. When DAB+ launched in 2009 they removed a lot of the oldskool 90s dance and urban tracks, to move more mainstream and ratings started to go backwards, however they seem to be doing alright now - near or at the top- in a much more competitive landscape than back then.

When you stream Nova online, you always get a native ad played before you are connected. It’s very annoying if your connection drops out because you have to hear the native ad again before it reconnects.

A bit of a role swap!

Kate Richie will also be off today and tomorrow filming Australia’s Got Talent. Will their two shows go head to head?

Awkward that it’s the show Ursula is no longer part of.

How is it awkward? Urzila chose to leave and then Chrissie joined the show.

Kate Richie will also be off today and tomorrow filming Australia’s Got Talent. Will their two shows go head to head?

I think AGT will go head to head with The Amazing Race Australia.

According to the Herald Sun, Sam Pang is out of contract with Nova at the end of the year.

Apparently Sam says he is only on air from 7am-9am, Monday to Thursday. I’m not sure if he’s joking, but Nova listeners, is the late start and getting Fridays off true?

While I haven’t listened to the show in years, I do remember him starting at 7am like 4 years ago so it doesn’t surprise me if he is still starting late. Not sure about Fridays

Pretty sure it’s true as he isn’t in the podcast until roughly half way through each day.

Not sure about Fridays

I think Dave O’Neil does Friday.

Apparently Sam says he is only on air from 7am-9am, Monday to Thursday. I’m not sure if he’s joking, but Nova listeners, is the late start and getting Fridays off true?

Yes this is correct. Chrissy and Browny do the first part of the show with Deano and without Sam. And he hasn’t worked Fridays in the 3 years I’ve been listening.

Doesn’t enhance the ratings either.

Olympia Valance was guest co-host on Nova 100 breakfast today (August 18) as Chrissie Swan is not well. Olympia appeared from 7am to 9am while Sam appeared in the first hour of the show as well. 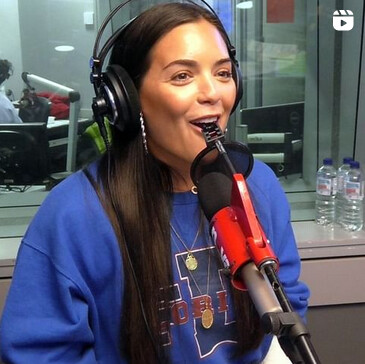 Kate Ritchie has been absent of late and Ricki-Lee has been filling in. Is Kate about to announce she is leaving?

I didn’t hear them give any reason for her absence this time but I suspect she has been sick again. I missed start of the first day Rikki came in but they did say she was asked to come in at very short notice.

Kate had a birthday last weekend and on social media she said “not happy birthday” so maybe she was either sick or dealing with something personal.