Malcolm Turnbull said he expects to call a double dissolution election for 2 July.

“After the budget, I will advise the Governor-General to dissolve both houses of parliament and I will advise him to call an election on the second of July,” he said.

No doubt this will be the top story around the bulletins tonight. 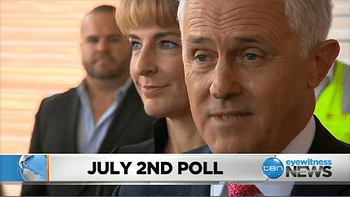 Federal politics can be discussed at

For discussion of federal politics.

Fast forwarding to July 2 or whatever date the Federal Election will actually be held, I think it will be interesting to see if Ten even bother having any longer form coverage. Considering the major cutbacks that Ten’s newsroom has had since they last had to cover a Federal Election, I wouldn’t be too surprised if they just go with updates throughout the night and maybe crosses to the victory/concession speeches like they did with the Queensland and NSW State Elections last year.

Presumably, SBS will have the usual 6.30pm bulletin, updates through the night and a special late bulletin or something like that and I think it’s pretty much guaranteed that Seven, Nine and the ABC will have extensive Federal Election night coverage (not to mention extensive promos for their Federal Election night coverage) from 5pm AEST until late.

To any News Bosses who read this blog (TV, Radio, Print & Web)
Whenever the election is, can you all organize yourselves to collectively boycott the various parties Press Busses where you end up at a well planned photo op with the ever present rent a crowd.
If the parties don’t publicly provide 36-48 hours notice in advance to an event so real people can attend in-stead of the usual rented supporters club, THEN DON’T ATTEND IT YOURSELVES !!!
It’s time to STOP the major parties manipulating the news services we receive at each election.

@SydneyCityTV surely they would more extensive coverage then that on the night. Either Ten News or The Project. State Elections are really different to Federal, as Federal is more up there then the State Elections.

It’s about the vibe…

The big question is what will the election night coverage be called?

Based on some previous coverage it could be Australia Votes (ABC), Australia Decides (Nine), Your Call (Seven), The Election Project (Ten)

Interesting to see how many debates (and the worm) are scheduled plus those Sky People’s Forums.

I could imagine Sky News using “The Decision” as a coverage name/brand. And of course, I wouldn’t be surprised if a certain newspaper decides to use “AUSTRALIA IS DEAD” or “THE VOTE THAT DESTROYED AUSTRALIA” as a front page headline the following Sunday morning if a certain side wins!

But which network will have the biggest d**k? How many people did Nine and Seven manage to squeeze onto their sets in 2013? Though The Project tried hard too 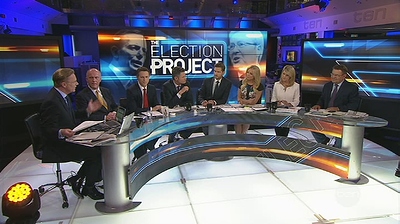 Hopefully Nine forget about using any gimmicks for showing those whose lose their seats - what have they used before? The Boot was used in Qld 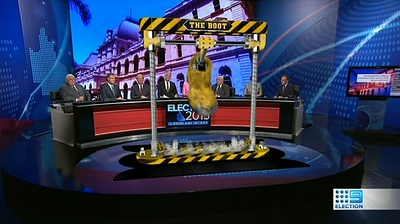 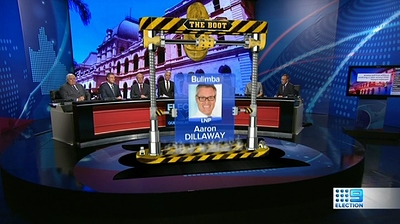 And Seven had the “Election Taxi” 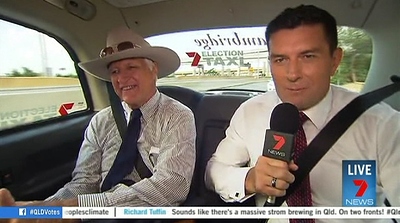 Yeah, thanks for reminding me about Nine’s “The Boot” and Seven reporters like Damien Smith and Lee Jeloscek interviewing politicians in a car during the NSW State Election last year!

From what I remember, there was also some shocking CGI of Sydney on Seven’s NSW State Election coverage. I guess this year, we’ll probably see a dodgy computer animation of Parliament House in Canberra or something on Seven!

Just to refresh your memory! 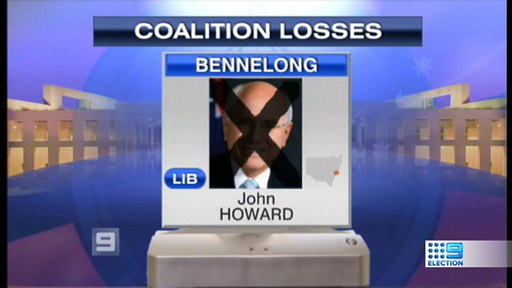 …and of course during the last Federal Election, there was “The Shark Tank” (well, at least that’s what I think it was called anyway): 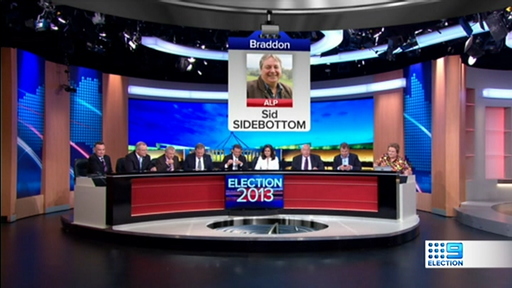 Vault has been down since the start of the year

Just to refresh your memory!

Loved this moment. Nine will probably have the boot this year.

For TV broadcasts on July 2. the networks will have the following programs. What I’d expect from past elections.

Would like A Studio 10 style election night from Ten. I think they have earnt their stripes and @blackbox would do an amazing job

For the 2007 election Ten ran Star Wars V against the other network’s election coverage (and a late update). In 2001 Seven had The Nation Dumps with Roy and HG.

Vault has been down since the start of the year

Yep but not the point I was trying to make.