Continuing from Supermarkets and Retail

It’s such a shame there are morons out there who are accusing businesses of profiteering from the pandemic when so many have done it to keep their business and employees afloat or in some cases at the request of the government.

'You should be ashamed': Businesses accused of profiteering off pandemic

Small firms that have switched to selling hand sanitiser, antibacterial wipes and other items have been accused by some customers of profiteering from the crisis.

Coles and Woolworths have increased trading hours from today afterall, puzzled as to why they didn’t make a big song and dance about it as they did when saying they were cutting hours to 7am - 8pm…

Alongside this change, Woolworths has increased the amount of stores trading with significantly reduced hours (9am - 6pm) as a result of commitments to packing of online orders.

Absolutely agree with you if it’s businesses that are producing items in Australia such as distilleries and wineries.

Don’t agree with those that are just hopping onto Aliexpress / Taobao etc and buying up stuff from China to resell at a significant markup (As I suspect the owner of the Costume Box in the article is doing) no matter which way they try and spin it, this is profiteering. 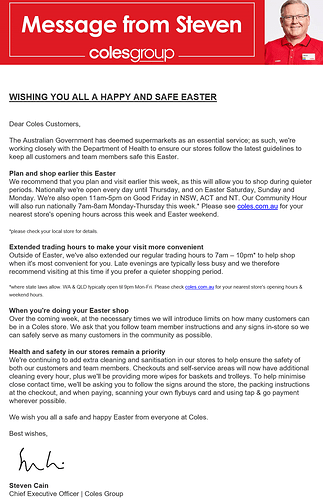 Don’t agree with those that are just hopping onto Aliexpress / Taobao etc and buying up stuff from China to resell at a significant markup (As I suspect the owner of the Costume Box in the article is doing) no matter which way they try and spin it, this is profiteering.

If they are doing that, I agree, but the article doesn’t say she is doing that.

JB Hi-Fi is temporarily closing some stores located in CBDs. 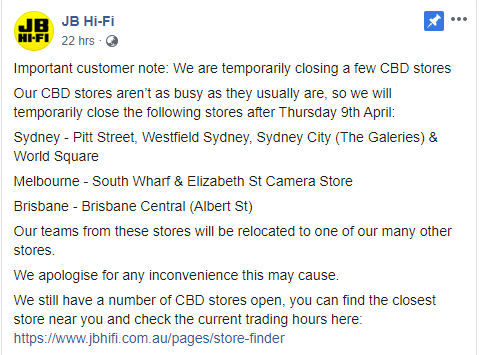 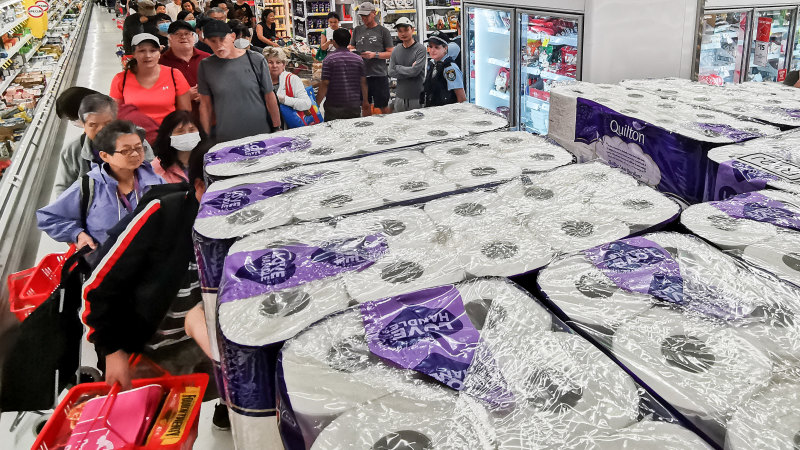 Hoarding boom is over: CBA says shoppers have closed their wallets

Hoarding appears to be coming to an end as shoppers snap shut their wallets and wait out the coronavirus.

Oil prices have plunged below zero, the latest never-before-seen number to come out of the economic coma caused by the coronavirus pandemic. 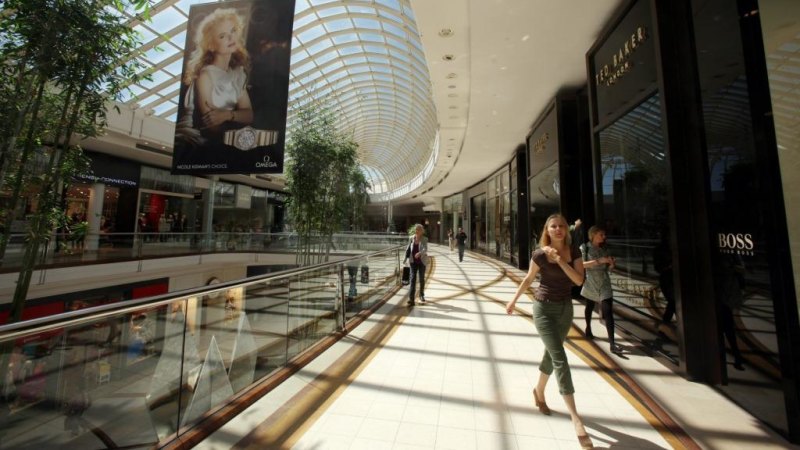 One of Australia’s biggest shopping centre landlords has threatened to take action against shop owners closing their doors to protect employees from the coronavirus.

So what now happens to all the extra staff Woolworths and Coles have hired?

Both Coles and Woolworths have relaxed its limits on toilet paper in the biggest sign yet that panic buying is coming to an end.

From today, Coles customers be able to buy up to 10 packets of either toilet paper or paper towel, with the supermarket saying it had been able to lift the current restrictions thanks to “the efforts of our suppliers”.

Woolworths have confirmed they are removing limits of one packet of rice or toilet paper to up to four per shop from tomorrow – as well as lifting limits completely on items such as pasta and tissues.

I’m excited! Wait till the stock piling starts up again…

… drawn a sharp response from ACT retailers, some of whom are paying more than double the fixed costs incurred by similar-sized service stations in regional areas such as Yass and almost four times that of the busy retail sites such as on the M4 motorway at Sydney’s Eastern Creek.

Land tax and rate costs on these service station sites obtained by The Canberra Times have verified these claims.

One ACT fuel retailer, who did not wish to be identified, said the playing field was not an even one because some discounters buy refined products direct from South-East Asia whereas others refine in Australia and therefore incur higher costs.

On Tuesday, Viva Energy/Shell had a terminal gate price in Sydney for regular 91 RON unleaded of 81.84 cents. Exxon Mobil was set at 83.75 cents and Caltex was 89.09 cents. Transport to Canberra generally adds between 4-5 cents per litre.

So 85 c/L when it arrives at a Canberra station, and Barr’s maximum means 90 c/L before GST, so 5 c/L - of falling volumes of fuel being sold - will have to cover all of the retailer’s fixed costs, including the ACT rates, staff pay, etc.

Oh, and weirdly Ampol (formerly Caltex Australia) has the most expensive gate price, yet (in Canberra) Shell/Coles seems to be generally more expensive than Caltex/Woolworths.

The actual reason is because ACT and other regional fuel markets do not follow metro area price cycles, therefore a higher average price is applicable to maintain average retail margins on fuel on a week by week basis, although even with this in mind the Chief Ministers request is reasonable considering the current terminal gate price. The excuse given by the retailer is rendered void when you consider Australia has other markets like Perth where all fuel products are refined at a single refinery and this hasn’t resulted in price gouging, or markets like Darwin and Hobart which have the same price gouging occurring despite terminal gate prices hovering around 85-90cpl.

I’m surprised Costco doesn’t have more of an impact on the fuel market in Canberra considering they’d be constantly selling for 20-30cpl less than the average across all fuel products.

The ACT’s more expensive rates combined with the lower sales levels now did seem a reasonable concern and made me think maybe $1/L was a few cents too low a cap, but the retailers recent prices have been way above that and so there’s clearly been profiteering.

You’re right that the lack of weekly cycles a big factor in Canberra’s traditionally high fuel prices, and the lack of easy/direct competition is worse here because of old Canberra planning rules placing servos away from major roads.

Costco (who I guess Barr was referring to when he said some are selling at 90 c/L) is out of the way, and most of the time there’s a huge queue of cars waiting to fill-up, which can be discouraging (and there is the Costco membership fee to take into account when comparing their prices).

PS: A FuelWatch scheme, with prices announced & fixed the day prior would be great, making it easy to see where to go. That would really help the situation, but the ACT government doesn’t seem to have done anything about implementing such a scheme.

but the ACT government doesn’t seem to have done anything about implementing such a scheme.

Apparently they have written a letter to Gladys asking to be included in the NSW Fuelcheck.

The ACT government wants to borrow a NSW app-based system to encourage cheaper fuel prices in the capital.

It’s a good app. I use it all the time. It’s updated regularly and is very accurate.

I have sometimes found 15-20 cents differences between petrol stations within 1-2kms.

Yeah, I’d forgotten about that, but even still, how long did they do nothing before that, and there is no announcement of what (if any) response the NSW govt has given, let alone any actual progress on it.

If NSW agree, there’d be a lead-time for legislation to enable the system, then for stations to sign up, and as the article suggests there’d have to be technical changes in the app/system such as sending notifications of incorrect pricing in the ACT to ACT fair trading investigators instead of NSW.