Bum, I was getting my hopes up that 7HD or Flix was being rolled out on a wider scale.

Interesting. I wonder how long 9Life has been broadcasting in Darwin for…

Don’t ask me to explain the logic of SCA’s TV operations, but at least one of the very few good things about WIN taking over ownership of NRN is the likelihood of an eventual LCN reshuffle.

Is it possible to tell if it is MPEG 4 or MPEG2 so the channel grid can be updated?

Bum, I was getting my hopes up that 7HD or Flix was being rolled out on a wider scale.

All dependent on SCA, who haven’t rolled out either HD* or 7FLIX in their markets

Is it possible to tell if it is MPEG 4 or MPEG2 so the channel grid can be updated?

Being Nine owned and operated, 9LIFE will be in MPEG2 in line with its other stations

I’m afraid I couldn’t tell you - the TV info lists the channel as 576i SD if that helps.

With SBS VICELAND now only available in MPEG4 HD, the upcoming launch of SBS World Movies (also expected to be an MPEG4 HD-only channel) and what appears to be a MPEG4 return for a HD version of 9Gem in Nine O&O markets, we might need to blow the dust off this old thread and give it an update?

EDIT: Oh, and an update to the HD main channel situation with Seven/Prime7 regionally + SCA Seven in Darwin as well! 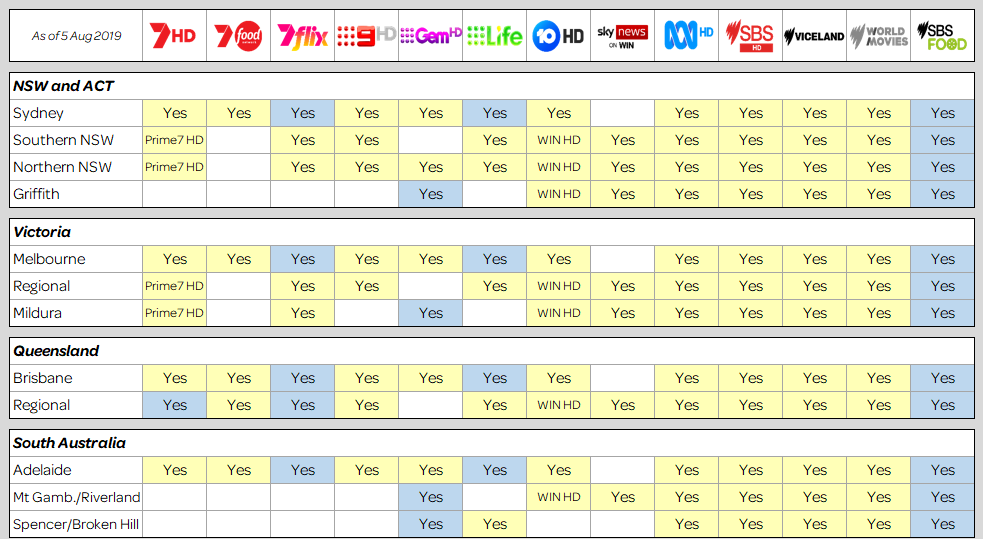 Just reading through the thread and noticed a few minor points.

7 HD is also available in regional QLD on channel 7 and 70.

. In the southern areas of the Sunshine Coast and Toowoomba this channel is broadcast on digital channel 64

When I was visiting Toowoomba recently, 7food Network was on LCN 74.
All other 7-based channels were in the 60’s, but 7food network was on 74 for some reason.

Also noticed in the table that is attached that WIN HD in Northern NSW is listed as LCN 80 when it should be LCN 50.

Also noticed in the table that is attached that WIN HD in Northern NSW is listed as LCN 80 when it should be LCN 50.

Why can’t I receive the new TV channel…
7mateHD

A:
Because Bruce Gordon won’t let you…

John Hartigan’s opinion of Bruce Gordon and Antony Catalano: He also said that there were no synergies between Prime and Australian Community Media, and that Prime and Seven would work towards putting the merger proposal back before shareholders.

Because Bruce Gordon won’t let you…

Because Bruce Gordon won’t let you…

I dont quite buy this - Prime7 have already been recalcitrant with launching new services (7flix, 7food come to mind)

Its bandwidth that prime7 would have to make available.and I don’t think prime7 have the money to upgrade all the towers again

That’s not how it works. No tower upgrades necessary (except in the remote licence areas). It would only a require a change to their playout structure which is then all combined into the multiplex before being sent to the tower.

would that require$$$ ??? or would it be that prime7 be lazy again?