Footy was so sharp

Sorry… Just to clarify. Was that 7HD or 7mate HD? 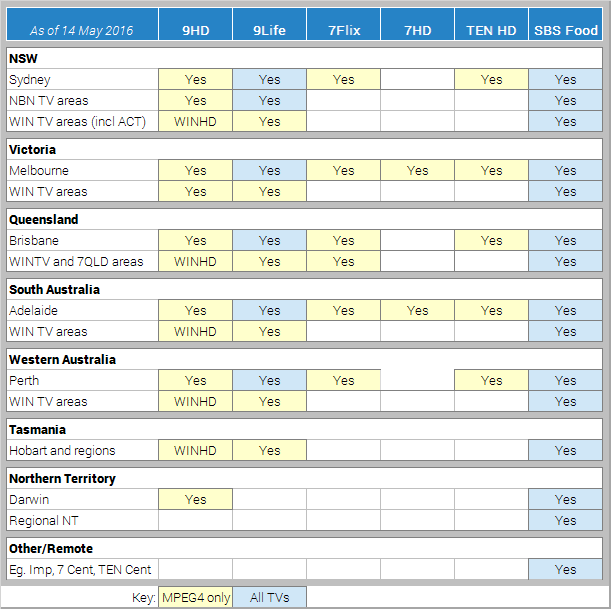 Except for the many people who don’t. 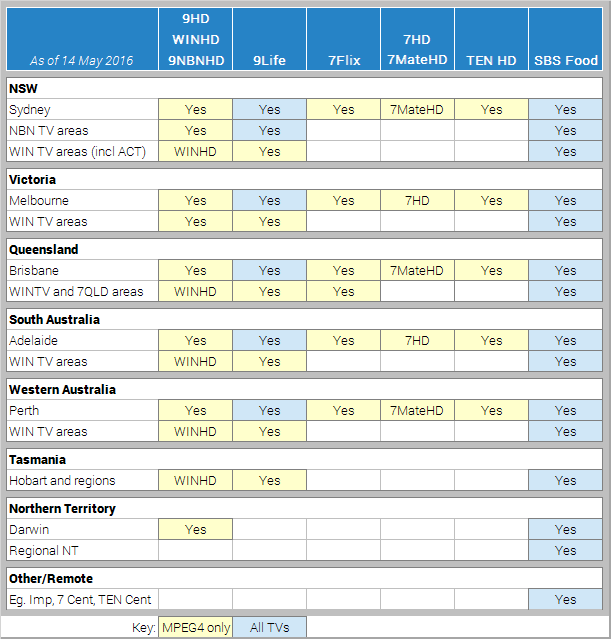 Obviously “9HD” and “9NBNHD” would be included in the relevant boxes, but that’s just a quick demo edit without access to the original (presumably) Excel document or anything!

But as per the above…

NBN HD is branded as 9HD (the branding is a mess here!)

Well, what are the LCN names? If it is “9NBN [Location]” and “9NBN HD [Location]”, I think it would be safe to refer to the station as 9NBN.

Besides, isn’t the station referred to as “9NBN” on screen (small “NBN” text next to Nine logo) in most current On-Air Presentation elements? Albeit the station is verbally referred to as either Nine or NBN, rather than 9NBN. At least that’s the impression that I seem to get from what I’ve seen online.

If NBN is now branded just as Nine (apart from NBN News of course), then I’d be happy to refer to it as that but if the station is still using that odd 9NBN logo…then it is 9NBN. Simple as that!

Last time I saw it was still NBN [Location] and 9HD [Location].

From the FAQ page that is referenced in the article

I think you’ll also find after 1 July, it’ll just be 9 anyway for consistency across their regional network.

Around I July we probably need a new article to answer questions “Why can’t I watch The Big Bang Theory on Channel 9 anymore”? or “Why doesn’t Channel 10 have Family Feud anymore?” aka How to retune for WINTV and Southern Cross 9 in regional Australia.

yeah yeah and they still used the NBN logo in that for 8 and 81 - it doesn’t exist.

The HD channel is labelled “9HD”

Think this is worth updating post-WIN/SCA affiliation swap

I did have a new grid prepared but not sure about some of the regional areas (SA and WA) so I didn’t post it. 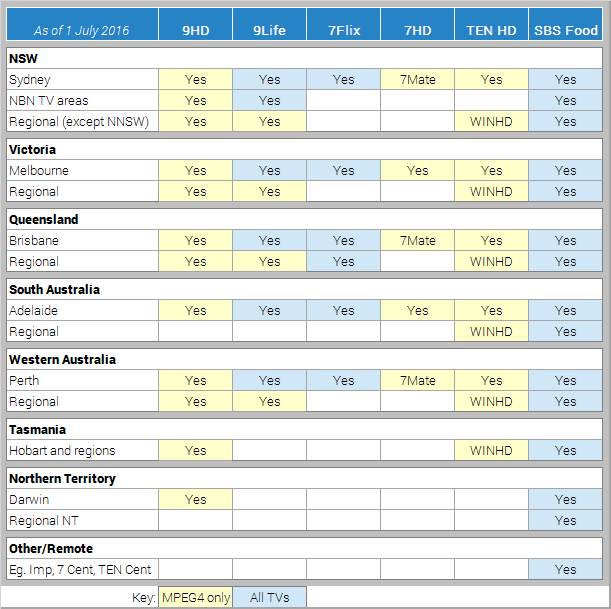 Thanks for the table!

One point - Prime7 regional areas in NSW/VIC do have “7HD”, but it’s 7mate HD and it’s only in MPEG2, not the preferred MPEG4 that Syd/Bris/Per gets.

Regional SA should be split into two as half the state gets their ten from SCA and not WIN.

Thanks for the table!

One point - Prime7 regional areas in NSW/VIC do have “7HD”, but it’s 7mate HD and it’s only in MPEG2, not the preferred MPEG4 that Syd/Bris/Per gets.

However, this is a guide about the new TV channels that have started up recently especially those that some can’t receive because they are MPEG4.

Regional SA should be split into two as half the state gets their ten from SCA and not WIN.