Coming To TEN And WIN Network In 2017

Network Ten is pleased to announce it has commissioned a new adaptation of Kenneth Cook’s classic Australian novel, Wake In Fright.

Wake In Fright will be produced by Lingo Pictures in association with Endemol Shine Australia, with the assistance of Screen Australia and Screen NSW. It will premiere on TEN and WIN Network in 2017.

The two-part television event will tell the story of John Grant, a young school teacher who descends into his own personal nightmare after being stranded in the small outback mining town of Bundanyabba.

Kenneth Cook’s Wake In Fright has never been out of print since it was first published in 1961 and has been translated into 10 languages.

The iconic 1971 film version starred Donald Pleasance, Chips Rafferty, Jack Thompson, John Meillon and Gary Bond, and is regarded by some critics as the greatest Australian film ever made.

The cast for Network Ten’s Wake In Fright will be announced soon.

Network Ten Head of Drama, Rick Maier, said: “There are few Australian stories as original or compelling as Wake in Fright.

“Kenneth Cook’s novel, now re-imagined for a new generation, deals with the biggest themes. Provocative, morally complex and brilliantly realised, this classic story is guaranteed to stay with you long into the night and – possibly – for years to come.

“It will be a privilege to broadcast this major television event on TEN,” he said.

Producer Helen Bowden said: “Based on a novel that is as fresh as the day it was written, with compelling scripts, and a director at the top of his game, Lingo Pictures is extremely proud to be making Wake In Fright for Network Ten.”

Good to see some more Aussie content for TEN next year, albeit being a 2 part series. Sounds interesting

According to TV Tonight, filming will commence in February 2017 in Broken Hill and Sydney, so we could be looking for the broadcast in the second half of the year.

Sorry this sounds absolute shit. What is it with remaking Australian movies into tv series all of a sudden that didn’t need to be. Wolf Creek, Picnic at Hanging Rock and now this. No thanks. How about getting some original ideas instead of going down the Hollywood route of regurgitation.

Yes it’s Australian content, but only a pathetic miniseries. So as usual no long term commitment, just schedule fodder.

Wolf Creek was one of the highest streamed shows ever, breaking records (double anything else Stan had screened at the time) and has had massive sales overseas. That’s why.

Wolf Creek was one of the highest streamed shows ever, breaking records (double anything else Stan had screened at the time) and has had massive sales overseas. That’s why.

Jbar it should have broke streaming records considering it only had No Activity for competition in the original streaming department. Not exactly hard in a two horse race.

Just because Wolf Creek succeeded (which I never doubted so really unsure of your hamfisted argument does not mean Wake in Fright will. I was also getting at creating original content rather than reheated movies. Ten could have easily found something original in the same genre as Wolf Creek.

Jbar it should have broke streaming records considering it only had No Activity for competition in the original streaming department. Not exactly hard in a two horse race.

Wrong. The statement refers to everything on Stan including overseas content. And no need to troll everyone who challenges your opinion.

Anyway chillax. This is just a two episode miniseries and it’s a genre that Ten hasn’t tried before. They’re dipping their toes in, to see if it’s worthwhile pursuing something different.

Wrong. The statement refers to everything on Stan including overseas content. And no need to troll everyone who challenges your opinion.

Anyway chillax. This is just a two episode miniseries and it’s a genre that Ten hasn’t tried before. They’re dipping their toes in, to see if it’s worthwhile pursuing something different.

Sigh. Really we’re back to this petty game of picking apart everything I post. Didn’t I tell you to ignore me and move on.

Well obviously it refers to everything, I never said otherwise. I was putting it in its own genre that had its worldwide premier on Stan i.e. original content. Compering it to OS content that they could have viewed elsewhere wasn’t impressive nor a fair or accurate comparison. Of course Wolf Creek’s streaming audience would look impressive paired next to a sea of acquired programmes. All it proved was that streaming in Australia with original content might be a worthwhile endeavor.

You just got sucked in on some crappy puff PR piece. No need to be that excitable JB. I actually think you’ve missed my point entirely too. Awkward.

JBar it’s sort of ironic you tell me to ‘chillax’ when you’re the only one that gets worked up into a tizz with what I post and an opinion at that.

No, they’ve seen the ‘success’ of regurgitation and that it requires little to no effort to adapt and thought they would do what Nine does best and copy the format. There is nothing noble or rewarding with Ten’s decision. Like I said if they truly wanted to dip their toes in they could have easily created something original. They get no points for reheated leftovers. 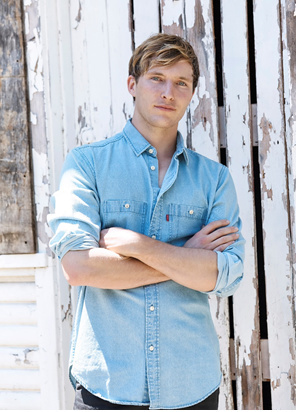 Network Ten is delighted to announce the stellar cast for its two-part television event Wake In Fright, which will commence filming tomorrow.

The star of Network Ten’s coming-of-age hit Puberty Blues and, more recently, the supernatural drama Glitch, Sean will play John Grant, a young school teacher who descends into his own personal nightmare after being stranded in the small outback mining town of Bundanyabba.

Joining Sean is one of Australia’s most well-respected and critically-acclaimed television and film actors, David Wenham, who will play Jock Crawford.

With a career spanning more than 30 years, David has starred in iconic television and films internationally and in Australia, including SeaChange, Top Of The Lake, 300, The Lord of the Rings and, most recently opposite Australia’s own Nicole Kidman in the six-time Academy Award nominated film Lion.

It is directed by Kriv Stenders (The Principal, A Place To Call Home), whose feature film Red Dog is one of the highest grossing Australian films of all time. Lingo Pictures’ Jason Stephens and Endemol Shine Australia’s Mark Fennessy and Carl Fennessy will executive produce.

Network Ten Head of Drama, Rick Maier, said: “There are few Australian stories as original orcompelling as Wake In Fright. This contemporary, edge-of-your-seat mini-series will be one of the year’s most talked-about television events.

“Working with the team from Lingo Pictures and Endemol Shine Australia, writer Stephen Irwin and director Kriv Stenders has been an exercise in pure professionalism. We are incredibly excited to see what this all-star cast brings to this brilliant material.”

Lingo Pictures’ Producer, Helen Bowden, said: "Generations of Australians have had nightmares after reading Kenneth Cook’s 1961 novel Wake In Fright. Set in one of the most inhospitable places on earth – the outback – this is a story filled with menace and mystery.

“Stephen Irwin’s vivid scripts have attracted the cream of our acting talent. And who better to direct this gripping psychological thriller than Kriv Stenders. Lingo Pictures is very proud to be making Wake In Fright for Network Ten with this team.”

Director Kriv Stenders said: “It’s such an honour and thrill to be a part of this incredible project. Being able to enter into the world of Kenneth Cook’s original novel of Wake In Fright and imagine a new story from a contemporary perspective has been one of the most creatively exciting experiences of my career so far.”

No mention of Newton’s Law

This remake would want to be good, because the producers are on a hiding to nothing.
The 1970’s movie is one of Australia’s greatest films, so they had better do it justice.
Sean Keenan is a magnetic presence on film, so that is a positive start, but the generation that gave us Jack Thompson, Chips Rafferty, Slim DeGrey, Donald Pleasence is well behind us.
But nevertheless, good luck, I look forward to seeing it and hopefully enjoying it. 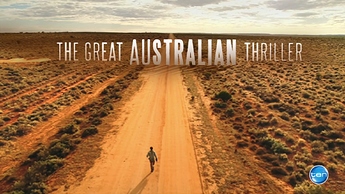 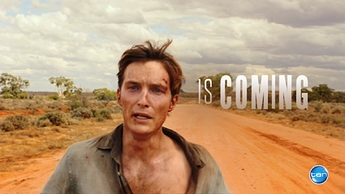 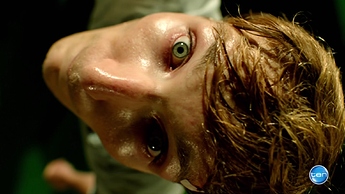 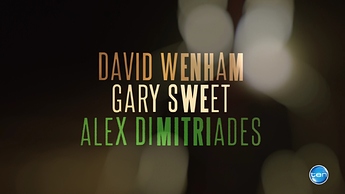 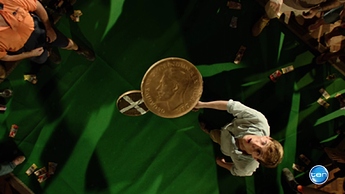 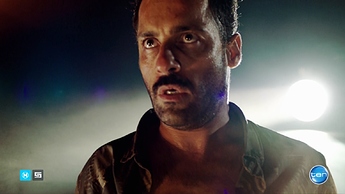 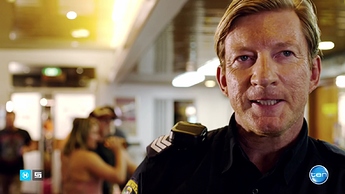 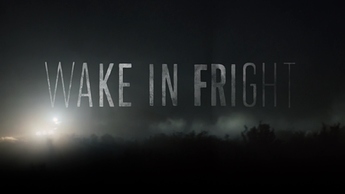 Wake In Fright. The Television Drama Event Of 2017.

First Look At The Contemporary Interpretation Of The Classic Novel.

Coming Soon. Only On TEN And Win Network.

Wake In Fright is a contemporary interpretation of the classic 1961 psychological thriller written by Australian journalist and novelist, Kenneth Cook, and it is coming soon to TEN and WIN Network.

The book left an indelible imprint on Australian culture more than five decades later, TEN is proud to present Wake In Fright to a whole new generation of fans.

This two-part television event follows a young school teacher who finds himself marooned in a small mining town in Australia’s outback. A dangerous series of events ensue.

Set in one of the most inhospitable places on earth – the Australian outback – there are few stories as original or compelling as Wake In Fright. Told through the eyes of John Grant, this contemporary, edge-of-your-seat mini-series is set to thrill and captivate viewers.

Please click here for the first look at Wake In Fright.

The mini series premieres Sunday October 8 and will run over two weeks, according to News Corp. Also, kangaroo shooting scenes which appeared in the 1971 film have been deemed too cruel for a modern audience and replaced by a feral pig hunting scene. 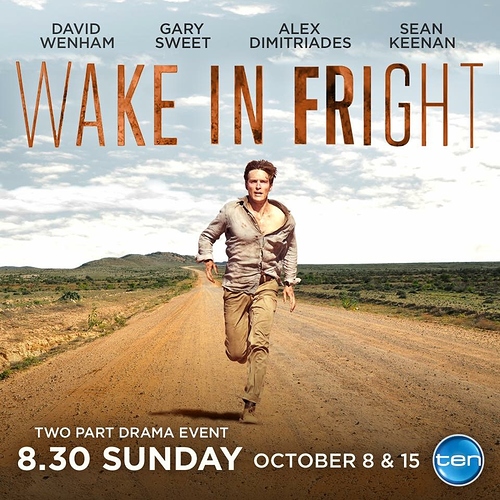