How many other mediaspy members can watch 2 channels on separate multiplexes at once?

I’ve got two dongles but I use the other one for DSD+.

Is this purely related TV on PC capability?

Cause if not, I can watch 2 channels on different networks at once by using my Samsung TVs “picture in picture” function, whereby my Blu Ray recorder provides the 2nd channel.

Most of the time I watch via my Blu Ray recorder as
A. I can rewind Live TV (VERY handy)
B. Less Overscan compared to my telly

I have five tuners in my computer and can watch all five multiplexes at once.

Also allows me to record videos like this one when WIN and SC swapped affiliations with 12 simultaneous channels:

I must be slowly catching up then

Does anyone use a dedicated PC at all?

Also when having 5 or so tuners would that require any amplification?

Does anyone use a dedicated PC at all?

I have a dedicated multimedia-serving PC (the one with the tuners). It acts as a network tuner, allowing any of the computers on the local network to watch any live TV channel or TV recordings through Kodi.

Regarding amplification, I have a masthead amp that goes to four different sockets, which leads on to about 10 different devices/tuner:

Even with 10 devices connected, the TVs still report 10/10 signal strength and quality on both the Sydney and Wollongong channels. I also get a weak just-watchable signal from the Kings Cross transmitters (the antenna’s not pointed in the right direction for it).

I have an iMac that I would really like to make a capturing computer. Any recomendations on a capture device?

I have used EyeTV in the past with Mac and that was really good, not sure if they still make it though.

Putting in my hand for MediaSpiers with too much money: 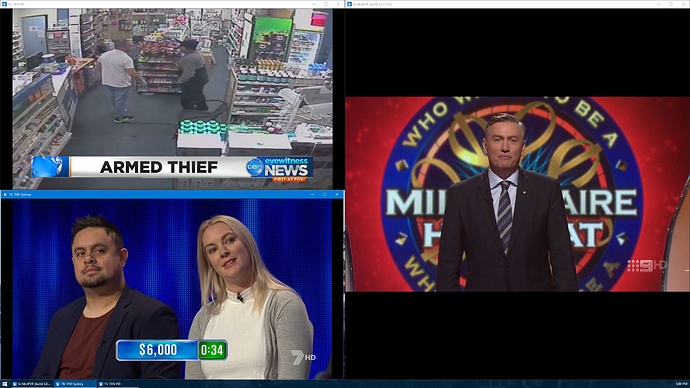 If your using SichboPVR and have multiple tuners you just crtl+click in the EPG. If you only have one tuner you can only view multiple channels on the same multiplex.

Are you able to record multiple channels at once or only watch?

Yes if the ‘slaving’ is set up correctly you should be able to do so as seen here: 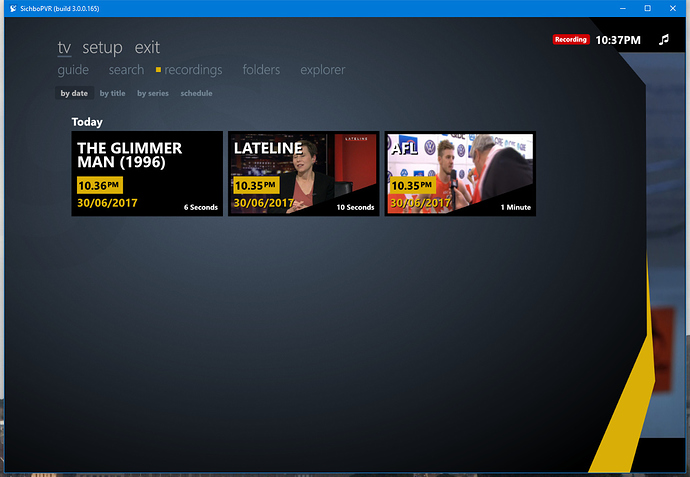 This is the hardware setup I have (3x Avermedia Volar HD PROs into a USB hub): 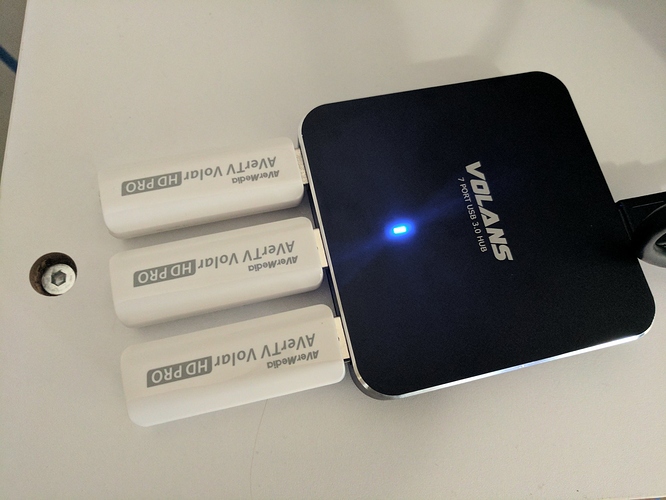 Can you suggest a dongle that works with windows 10? I had a Kaiser Baas one that I used but it isn’t supported in Windows 10 or made anymore so it’s useless now and I need a new one.

Yeah, I’m pretty sure the old “TV Stick” tuners from Kaiser Baas are of the RTL-SDR/RTL2832 variety. You’d probably be able to find Windows 10-friendly drivers with a Google Search.

There’s plenty of software out there that works great with HD & SD DVB-T transmissions of both MPEG2 and MPEG4 flavours and for DAB+ Digital Radio (if you’re in a market where it’s available), DAB Player has pretty much everything you need for that. If anyone can find some decent quality software for the FM portion of the tuner that can be used without having to fiddle around with the drivers, I’ll be there in a heartbeat!

Note that when using RTLSDR drivers you won’t be able to use DAB Player or anything for DVB-T so I’d suggest using seperate USB sticks if you want to use both.

Note that when using RTLSDR drivers you won’t be able to use DAB Player or anything for DVB-T so I’d suggest using seperate USB sticks if you want to use both.

Correct, DAB+ audio is on the different driver (it’s on the SDR driver) then the DVB-T driver.

In that case, use SDR# for FM receiving, DAB Player for DAB+ and SichboPVR for DVB-T.

SDR# will record 2MHz at a time in a waveform format so you can archive the 2.5MHz block of spectrum at once, tho this will take a lot of storage up (approx 1GB a minute).

Can anyone recommended PVR software for Windows 10 for HDHomeRun (SiliconDust) HDHR3-DT?
It’s a dual tuner connected via ethernet RJ45 to the PC (rather than usual USB).
The PCI DTV Divico cards I also have, may also be a hardware option (used in my Win 7 PC)

I’m currently using Windows Media Centre (WMC) with Windows 7. Unfortunately support for both Microsoft software ends in January 2020 & the EPG service will end in January 2020 also. Sad as WMC did everything I wanted very nicely with either 2 of my DIVICO PCI DTV cards or the HDHomeRun dual tuner.

Any helpful recommendations for easy to use software that I can view TV channels with, record TV, has a working EPG that is frequently updated (& if possible for the software to be able to record one channels whilst I watch another or record two channels) - would be appreciated.