I don’t mind this show so far.
But then I have a soft spot for game shows.

No idea whether it will rate or not, but I hope it does okay.
It deserves to, there’s much worse out there on TV.

The canned shouting is annoying. The audience are never cheering but it’s added after.

Clearly they don’t know what’s going on because they don’t understand English. Lacks the atmosphere with a polish audience.

Seven are already sending out media releases about how much money was won tonight complete with quotes from contestants. Looks like that will be their approach to attract more viewers. How lucky was it for Seven that there was a big payout on the very first episode

Ridiculous for this to be filmed in Poland when the atmosphere created by the studio audience adds to the excitement. I’m sure they’ll be able to find plenty of english speakers in Poland to pad out the audience but I’m not sure they’d get behind the contestants in the same way a local audience would.

why can’t they film the Australian version in Australia a la the Chase?

I am assuming that they filmed on the Polish set to trial the show but will build a set here if it is successful.

Because the set costs a fortune. No point in building a set here wasting the money if the show doesn’t rate. Sensible in my opinion… 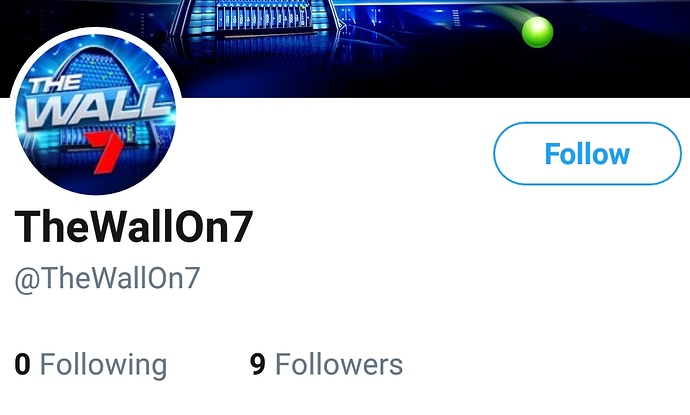 This show reminds me a lot of Press Your Luck which was hosted by Ian Turpie and aired on Seven in 1988: It relies much on luck. You can win a lot of money or lose all the money almost instantly.
The format looks complicated when I first see it on Wikipedia, but it is quite easy to follow.

Clearly they don’t know what’s going on because they don’t understand English. Lacks the atmosphere with a polish audience.

Yeah, the crowd were really flat during the middle rounds when the guy in the isolation area was thinking about his answers whereas they really get involved in the US version in voicing approval/disapproval at the choice selrctef

I am assuming that they filmed on the Polish set to trial the show but will build a set here if it is successful.

Even if it rates I’m not sure they will build a set here. If they plan to make it a year-round show (ie 30-40 episodes per year) then a local set would make sense but if it’s just a short-run thing with 10-12 episodes per year then I’d expect them to continue going overseas (but perhaps find a way to do it in the US rather than have audience of young Polish ladies all wearing black t-shirts).

Axle says that the show was filmed with an English speaking audience consisting expats and the like. The reason for filming abroad was that the set is over 4 stories tall - so would be massive and expensive to build here. There are 3 sets in the world: LA, Poland and France; so I guess Poland was chosen out of those due to scheduling

As an avid game show fan, I found this a real struggle to get through. The game is based off Plinko (the most popular Price Is Right game in the US) which is fine, and The Wall has done enough with it to get a reasonable format out of it.

However, nothing turns me off a game show more than contestants who have clearly been coached to within an inch of their life on how to behave and react as was the case with this show. This often seems to be the case with game show premieres (The Rich List rings a bell here too) and all it does is make the whole thing appear fake.

The squealing after every single amount, and the running to the board after selecting an answer in the first round were both obnoxious and it didn’t get much better when they were separated. The editing and padding were over the top as well, and the audience couldn’t have looked any less enthusiastic about it all which made the reactions on stage stick out even more.

If they don’t trust that the game format is strong enough to succeed without this level of stage-management then there’s not a long future for the show.

It’s typical Seven, could be decent but they’ve stretched it out way too much.

I was wondering if tax issues might also have effected the decision to go to Poland.

The woman playing tonight is so annoying. Why the sob stories? How she chose what numbers to drop from. And that running around the wall as they dropped. 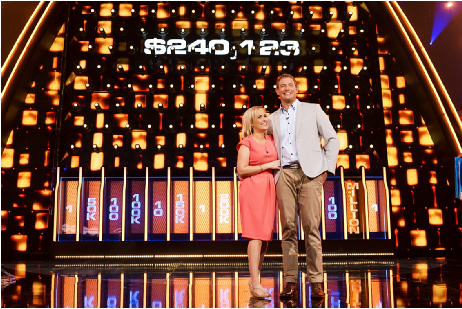 Winning big on the premiere episode of Seven’s THE WALL is a dream come true for husband and wife team, Chrissy and Dez.

“This has been such an amazing experience, I’m so thrilled to have been here,” said Chrissy of their win which will ease the financial burden of their son’s upcoming surgery.

“The Wall has changed our lives. James will get his surgery,” added an emotional Dez. “Our other two kids, Grace and Josh, everyone’s just going to be so blessed and I couldn’t be happier.”

Chrissy and Dez had a phenomenal start to the game getting all five questions right during Freefall. The wall rewarded them in a huge way with the balls hitting the $25,000 slot three times in the round, as well as finding the $10,000 slot four times. Chrissy and Dez finished Round 1 with a total of $140,123.

In the next round Dez went into isolation and answered the questions leaving Chrissy to take on the wall. Chrissy quickly added another $10,001 to their total with the two free money balls, taking some risks by doubling and tripling up on the questions. Dez got two of the three questions right, giving the couple mixed results on the wall… they added $13 to their total for the correct answers, but lost a huge $100,100 for their one wrong answer. Luckily when the final red balls dropped, they only lost another $2, bringing their Round 2 total to $50,134.

Heading into the third and final round Chrissy knew their total had dropped significantly, but she had four free money balls to try and rebuild their cash. The first green ball landed on $100, the second landed on $10, and the third on $100… not huge numbers until Chrissy played the final free money ball and it dropped into the million-dollar slot! Their total immediately jumped up to $1,050,344.

If that million-dollar drop wasn’t enough, Dez answered the next question correctly, and that green ball dropped into the million once again, bringing their total to a whopping $2,050,344!

Chrissy, wanting to do everything possible to protect their total, decided not to double or triple up on the remaining questions. She needn’t have played so conservatively because Dez got both questions right, adding another $50,001 to their total. At the end of the questions, just before the final four red balls dropped, Chrissy and Dez had a massive $2,100,345 on the wall!

With four red balls to play Chrissy needed them to hit the lowest figures possible. The first dropped into $10, but then the unthinkable happened. She hit the million for the third time, followed by $200,000 twice in a row. So, in just a few seconds their total of over two million dollars became $700,335, which luckily is still a mind-blowing amount of money.

Over to Dez in isolation, who had no idea what happened on the wall or how many questions he got right. If he signs the contract they’ll get their Freefall total plus $20,000 for every correct answer after that, which makes the contract worth $240,123. But if he takes a risk on Chrissy and the wall, and rips up the contract, then they’ll walk away with $700,335.

With so much on the line, three gorgeous children to support and a life-changing operation to pay for, Dez played it safe, signing the contract, allowing the couple to walk away VERY happy with $240,123 in their pockets.

On Tuesday night’s episode: Senior Constable Jess and Detective Sergeant Lee are parents to two young daughters. Now married for six years, the shift workers hope a win on The Wall will allow them to spend more time together as a family.

Did anyone notice that they never actually explained what was wrong with the kid that required such expensive surgery?

They did at the very beginning. The child has quadriplegia cerebral palsy. The surgery has the potential to correct or improve movement in the limbs and joints.

They did at the very beginning. The child has quadriplegia cerebral palsy. The surgery has the potential to correct or improve movement in the limbs and joints.

Just caught up with it, my apologies

Ah, you would think so, but the ratings strangely painted an opposite picture

I guess I am the one here who has enjoyed the show? Yes sometimes The Wall can be brutal with contestants walking away with nothing (as was the case with tonight’s episode and last Sunday’s episode), but overall the questions are quite good and it was exciting to see where the ball will drop in the money slot. I hope it will be renewed for a second season but it means another trip to Europe (either France or Poland) for filming.