I just stick to the ‘Buy It Now’ listings and take the gamble. Now even though a listing title says “Ads” that’s often not the case. I’ve placed bids on some listings before and within the last few seconds before it ends I’d be outbidded (even after I maxed the bid).

Like @Zampakid, I stick to the ‘Buy It Now’ listings too. Though, I last got tapes there a few years ago. I ask similarish things; making sure that they have commercials, as well as the tapes themselves being in good condition.

@mubd is on the money, though. I’m usually on FB Marketplace, Gumtree too.

Managed to pick these up from a garage sale yesterday. 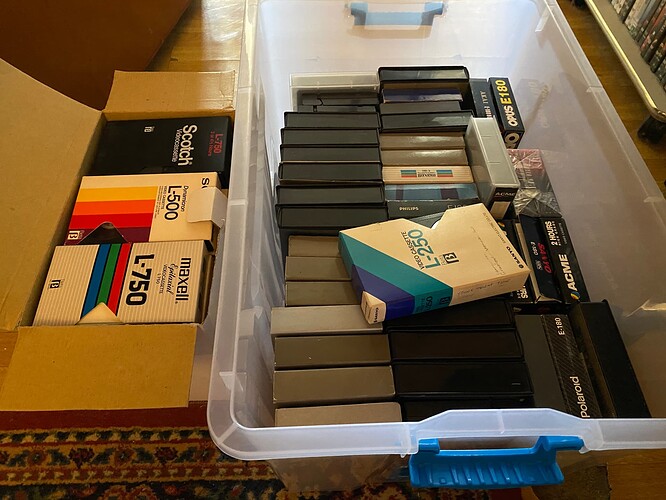 Do you transfer an entire tape then check if there is anything good on it, or do you check what’s on the tape before transfer?

I check the contents before I capture.

I’ve got boxes of tapes I haven’t looked at for years but never find the time to do anything with them. Some of them are labelled and some aren’t. I’m not even sure if they’re all playable and have considered tossing them a number of times.

Do you transfer an entire tape then check if there is anything good on it, or do you check what’s on the tape before transfer?

I generally check, sort the tapes in order of what I want to capture (generally the more interesting content first), and then capture.

For example, I’d love to capture some obscure old series recorded in the 1980s which is unobtanium today, but an episode of NCIS with commercials that was recorded in 2009? That can go to the bottom of the pile.

I use Leaktek WinFast capture cards (the PxDTV2300 H and previously the DTV1000 S but also have a DTV2000 DS Plus for DAB+) which I have been familiar with since the early 2000s. Not all models are the same though as it depends on the drivers and chip it uses.

I use 6 head Hi-Fi VCRs, the heads are cleaned when I start to notice issues which can be from 15 to 30 cassettes. I also tuned the tracking/linear audio head on a few of them recently which was a big improvement.

I use an audio mixer for balancing the audio as I capture as I find every tape, recording and even segments can be different.

I grab using VirtualDub2 x64 as well as edit and output so no other program is needed. I even use it with multiple machines in a beowulf cluster doing a list of jobs filtering and encoding which greatly reduces the time needed waiting for rendering to finish.

I have 4 computers I generally use, I can mix between grabbing and beowulf clustering, but 2 of those are set up for grabbing with their own VCR and mixing console.

I upload to the Internet Archive and YouTube however YouTube must be resized to 720p or higher to maintain 50 frames per second otherwise 576 lines gets turned into 480p30.
YouTube vidoes also get synced to Odysee.