Simon Reeve’s quiet departure from Sunrise had been well documented in the previous thread, now comes the news that he is suing Seven in the Federal Court. 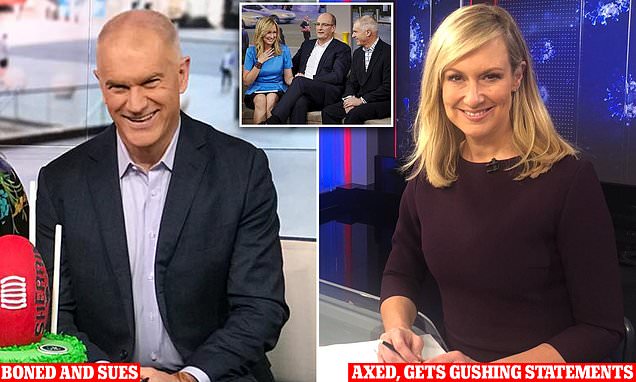 When Melissa Doyle was shown the door at Seven last month, the star and network executives issued statements praising one another. But things weren't so rosy for her former colleague Simon Reeve.

Daily Mail Australia understands the presenter’s lawsuit is about entitlements he believes should have been paid out when he was let go.

At the heart of the legal dispute iswhether he was an employee of Seven - as Reeve argues he was - or an independent contractor at the time.

Seven will be defending the case and is expected to argue Reeve had ‘changed his tune’ on being a contractor after being axed.

Simon Reeve’s quiet departure from Sunrise had been well documented in the previous thread, now comes the news that he is suing Seven in the Federal Court.

Such a shame to hear that he is now at loggerheads with the network, he deserves better. Weekend Sunrise was stronger with him on it.

At least we can still get a daily dose of Simon on the Million Dollar Minute repeats on 7TWO.

I’ve sampled. Their weekday team is ok, but not my preference. I still prefer WS over WT. These days when I visit my parents I quite happily watch Today where once I couldn’t tolerate it at all.
So… I guess Sunrise are lucky atm. If I was a viewer who watched the whole show, I’d be changing channels as I think I’d find Sam unbearable. But as I only see part of the show before work, it’s still ok atm.

Both commercial breakfast shows rated lower on Wednesday but Sunrise did comparatively better opening up a 40,000 gap over Today. News Breakfast improved and was less than 10,000 behind today.

Friday 18th September -
Kochie and Sam are hosting and Nat is reading the news.

Nice to see some consistency this week with Kochie and Sam hosting all five days together.

Sunrise won Thursday ratings; it was just under 30,000 ahead of a more competitive Today that saw its audience lift from Wednesday at the expense of News Breakfast that was more than 30,000 behind Today.

Sunrise had a big Sydney audience but Today was competitive drawing its best Sydney audience of the week. News Breakfast continued its winning streak in Melbourne with Sunrise second just ahead of Today. Today continued to win in Brisbane, where Sunrise was third. Sunrise won Adelaide and Perth with today second in both markets.

Daily Telegraph reporting that given the ratings war heating up, Kochie and Sam have been ordered back to working five days.

If they were confident in their product they wouldn’t have to do this.

Sam won’t like that at all. Kochie seems more flexible with his days and does what he is asked.

As long as Seven return her to full time and pay her for 5 days, she’ll be fine with it. Rightly so though.

I take your point and agree to an extent… but Sam and Kochie are the product.

Overall this is great for the show as viewers can tune in and expect to see the same team each weekday.

But it kind of has a downside for each of the presenters as Kochie and Sam now have to work an extra day, Nat won’t be hosting and is back on news 5 days a week, and Eddy won’t be reading the news 2 days a week and is back on entertainment duties only.

I wonder if Seven will try and keep Kochie from going to watch Port Adelaide’s finals games (except for the GF if Port make it)?

Hard to see how that will make a significant difference. The ratings for days when Kochie and Sam are away aren’t the problem (if anything they are a bit higher!).

The ratings across the board and especially in Melbourne and Brisbane are the problem.

Its more about perception and stability. All the Sunrise marketing has Sam & Kochie front and centre, yet two days a week one of them isnt there.

Sunrise was built off the back of the “Sunrise family” so I guess its about going back to basics, and its about time.

Just goes to show how cocky they are thinking that allowing their two hosts to work 4 days and therefore different news readers etc wouldn’t make a difference.

People love routine and familiarity. This was always going to backfire.

Also said to have been ordered back [is] Sunrise executive producer Michael Pell, who has spent most of this year enjoying a stretch… overseeing prime time… leaving the day-to-day EP responsibilities [to] junior producers.

Seven News Director Craig McPherson confirmed… “They are back five days a week.”

That’s a problem too. They’ve been resting on their laurels for too long. Time to get back to what made them successful.

But what can be done to solve them? I know they could rein in Sam’s daily rants but would that work? Or is it that Brisbane and Melbourne are just so rusted on Nine that it wouldn’t work either way.

What exactly has Pell been doing in prime time?

What exactly has Pell been doing in prime time?

The only things he did was Fire Fight and Big Brother GF. That’s all I think.