I think they would also benefit from a better set. The rebranded news set doesn’t work imo.

the hosts obviously have good chemistry

Hang on, what will happen to Ding Dong?

She hasn’t been regularly been appearing on the show for quite some time now, don’t think any changes to the show will mean much when it comes to Denise.

Or even David and Kim…

They need to rethink the whole format, go back to what made the show different from its competitors and made it competitive and a real alternative - that’s what 10 should be.

Someone said something about a Jane Hall/Colin Lane combo before. That’s something I’d try and I’d also tweak the format so that it borrows elements of what worked well before in the old format, The Circle and GMA back in the day.

Bring back The Circle i’d say. At least Chrissie Swan will be retiring her Brekkie Show in Melbourne. Replace Yumi Stynes. Bring back Gorgi Colghan to Ten. And put Ding Dong reunite with the girls

My guess is Tristan’s wife Tahnya.

She’s had lots of health issues, hasn’t she?

They should move Tristan on to sports commentary that seems to be his passion or a sports panel show. I imagine the absence of Nerelda means she’s probably going to take over probably as a trial. I think Angela is capable of hosting and she was quite good with Steve Jacobs even though it was an odd pair.

Team up Exelby and Jacobs and watch them bring the laughs.

Narelda is off for personal reasons i think. She just started her summer early.

Surely Steve Jacobs is a shoe in, maybe Steve, Narelds and Tristian together.

Craig made a bunch of “jokes” about Sarah going to the Project today. Also Tash mentioned how shes moving closer to her.

All that being said, with such short notice do you think they have planned a big farewell show with all the old faces? Or will it just be a video package and bye like others.

Nah for sure a farewell show. She’s the O.G. of this show.

They just had a 9th birthday show (the one with the BIG announcement) - just pull out the footage from that.

Sarah is on the front cover of Stellar magazine this Sunday. 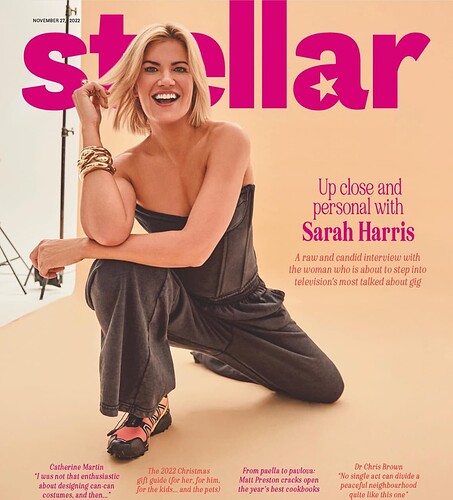 a big farewell show with all the old faces?

Hard to know how many of the “old faces” are still on good enough terms with the network or the producers of the show.

Well, Jess has been on the show often. Ita was just on the other day and considering how close Joe & Sarah were, I think he would be more than willing to appear for her farewell.

Anything special about Tuesday’s show?; +50% more than its usual audience.