In Production For Paramount+ 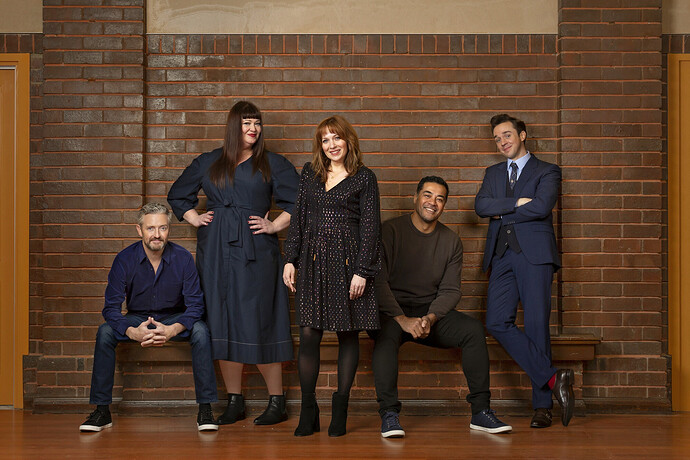 Produced by Northern Pictures in association with ITV Studios and created by Kala Ellis, Spreadsheet is an eight-part comedy series about divorced, hectic mother-of-two, Lauren (Katherine Parkinson) who is looking for sex without commitment.

With the help of best friend Alex (Rowan Witt), she develops “Spreadsheet”: a database of sex options, customised to ensure her sushi train of sex rolls around with variety and order amidst the chaos of her life. What Lauren didn’t expect was a slew of needy men, which apparently even a well-managed excel tracker can’t control.

Head of Drama and Production, Rick Maier, said: “When you read an idea this fresh and laugh out loud funny from such an original voice as Kala Ellis, it very quickly gets into your system. Then when you add Katherine Parkinson and this sensational ensemble you know you’re really onto something. I can’t think of a better first original commission for Paramount+.”

Northern Pictures Executive Producer and Head of Scripted, Catherine Nebauer, said: “Northern Pictures prides itself on creating unique series’, which surprise and delight, and this is certainly one of them! It’s been a joy to see Spreadsheet come together, with such a talented team behind it. Director, Darren Ashton and Creator/Writer, Kala Ellis have worked closely together to create the perfect blend of comedy, drama and spice, which only Katherine Parkinson can deliver!"

ITV Studios, EVP Global Content Julie Meldal-Johnsen, said: “Just thinking about Spreadsheet puts a smile on my face. Kala’s writing is warm, funny and poignant at the same time - making Katherine Parkinson the perfect person to play the hilarious and chaotic Lauren. Working with producer Northern Pictures again is a pleasure and we are very proud to be bringing Paramount + Australia’s first original comedy commission to our international clients. The show is sexy, frank, unapologetic and we are sure will engage and entertain people around the world.”

Launching on Wednesday, 11 August and priced at $8.99 per month, Paramount+ subscribers will have access to more than 20,000 hours of content throughout the year delighting Australian audiences with unique stories, iconic stars and a mountain of entertainment including a robust offering of premier local content.

Spreadsheet is coming soon to Paramount+ and has received major production investment from Screen Australia in association with Film Victoria and distributed internationally by ITV Studios.

It’s only on Paramount+ in Australia, with ITV selling it to other outlets around the world it appears. ? 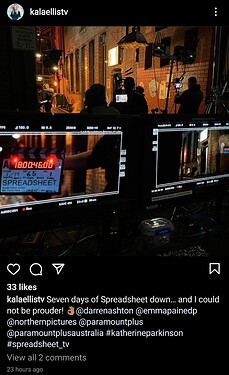 Interesting given paramount + have other territories and would be hungry for content. Hopefully it gets on the service in the US to expose Australian content to a large audience.

Looks like every Auusie show needs to have a British lead actor now.

Looks that way doesn’t it. Was probably part of the deal commissioning it, so ITV could sell it to a UK network + in other territories.

What do you mean by first Aussie production? What happened to the Kings cross Mini series?

It’s coming too, but I think that Spreadsheet was the first local commission for the platform.

Maybe Kings Cross + the movie that’s coming were both already in production or bought after they’d secured funding.

5 Bedrooms was already commissioned for 10, so that doesn’t really count.

“Sex Spreadsheet” would be a far better title that arouses more interest and curiosity.

That title alone would make me seek it out. Because the mind boggles what it could be

“Spreadsheet” actually is a turn off.

I think Spreadsheet is supposed to be a double entendre but it’s not that obvious.

Spreadsheet debuts on Paramount+ on October 27. 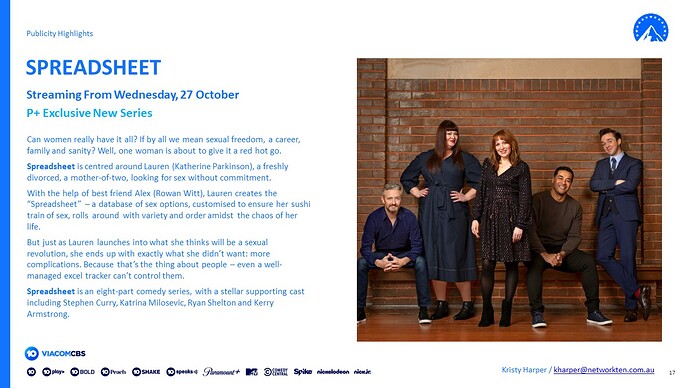 Spreadsheet. The New Aussie Comedy Series About Sex In The Suburbs. 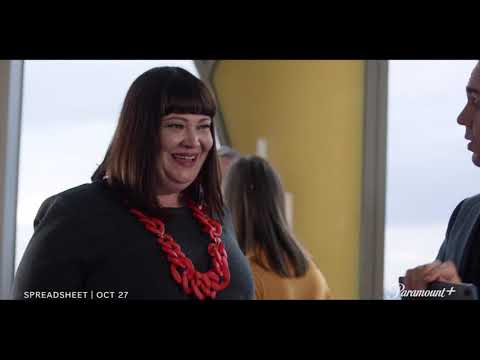 Can women really have it all? If by “all” we mean sexual freedom, a career, family and sanity? Well, one woman is about to give it a shot.

Meet Lauren. She’s freshly divorced, a mother-of-two, and is looking for sex without commitment.

With the help of her best friend, Alex, Lauren creates the “Spreadsheet” – a database of male options, customised to ensure her sushi train of sex rolls around with variety and order amidst the chaos of her life.

Another series centred on a middle aged woman. You don’t even hear the star of the show speak.

Some familiar cast members but that promo looks really underwhelming. Lucky it’s on a streaming service. That would never on a regular channel.

Release moved forward by one week.

Meet Lauren. She Is Not Looking For Love! 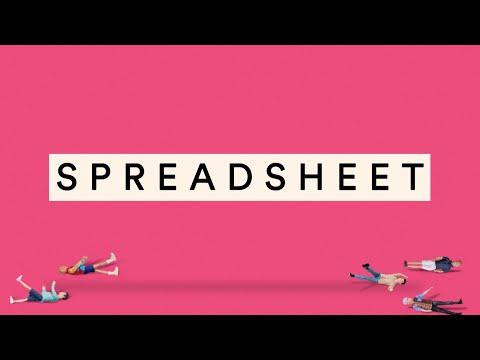 Spreadsheet is an eight-part comedy series that revolves around Lauren. Her life’s a little chaotic. Oh, and she’s having lots of casual sex.

Lauren’s already functioning at full capacity with a successful career as a lawyer, two wilfully disobedient but hilarious children and a slightly inept ex-husband. So how is she supposed to manage a slew of emotionally needy men as well? With a spreadsheet, that’s how.

A Northern Pictures Production streaming exclusively on Paramount+ from 20 October.

Very annoying watermark on Gogglebox tonight. What a turn off.

Reviews in, and it’s not amazing. Spreadsheet, the new Aussie comedy series about sex in the suburbs will kick off streaming exclusively on Paramount+ from Wednesda

Reviews in, and it’s not amazing.

Might explain why they had trouble featuring great scenes for the promo??? If there are better scenes, they should seriously consider creating another promo because the one they are currently running is really awful.

The show started on TVNZ2 in New Zealand tonight and will air on Tuesdays.

Australia gets a raw deal on its own drama productions. We have to pay a streaming service to watch our own shows and overseas they have them on free to air.

We have to pay a streaming service to watch our own shows and overseas they have them on free to air.

And Australian dramas (like Doctor Doctor and Wentworth) somehow premiered overseas before Australia. It’s a joke. If an American or British drama premiered in Australia before their respective countries then I reckon many people wouldn’t be impressed either.