One wonders how much the Foxtel coverage even gets them anymore besides visibility, and in the case of STC, a platform to satisfy the states that are much more wedded to Tabcorp (eg. NSW, QLD) than Racing VIC [and SA] wants to be. Having given up on charging $5 for Sky 2 probably suggested the game was up there.

Probably much more money in working out the contracts to show their content to the other bookies - both locally and overseas - and how much watching actually happens on mobiles. (My hunch is “less than people think”, in that people still bet on their phones while watching it at the pub or club…)

That includes the News Corp half-owned bookie that’s popped up in the last few months, which makes the whole “appearing on Foxtel/Kayo” thing even less likely in my head if all Sky Racing is now is advertising the TABs (both Tabcorp and the state-owned WA one). But then, that is also up to Tabcorp; it’s not like they had a problem with the Racing VIC channel given they have three of the other big multinational bookies as their main sponsors.

One wonders how much the Foxtel coverage even gets them anymore besides visibility, and in the case of STC, a platform to satisfy those that are much more wedded to Tabcorp than Racing VIC [and SA] wants to be. Having given up on charging $5 for Sky 2 probably suggested the game was up there.

Yep, it’s not like the days of “you need Sky racing to watch it”. Now, most of these individual racing organisations have their own streaming platforms. Or if you really want to you can just stream the Sky channels via the Tab platform. 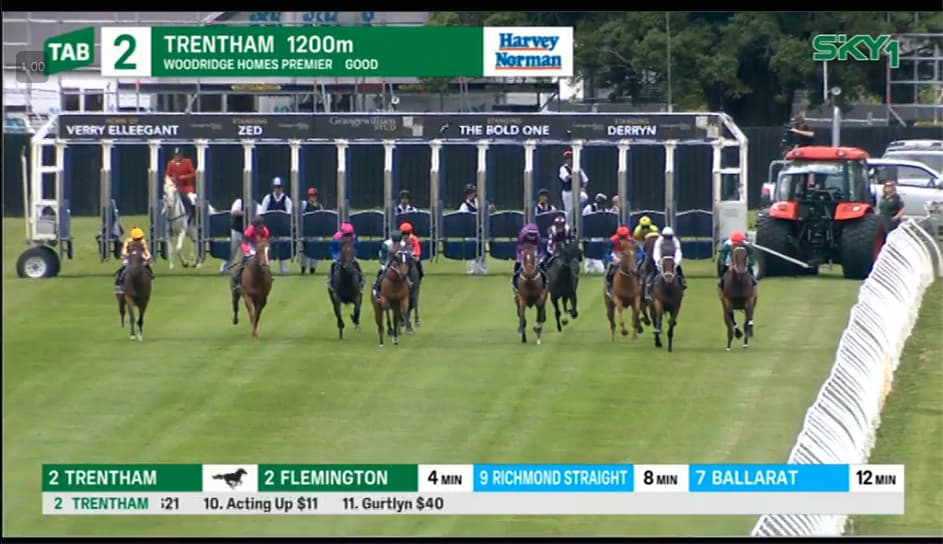 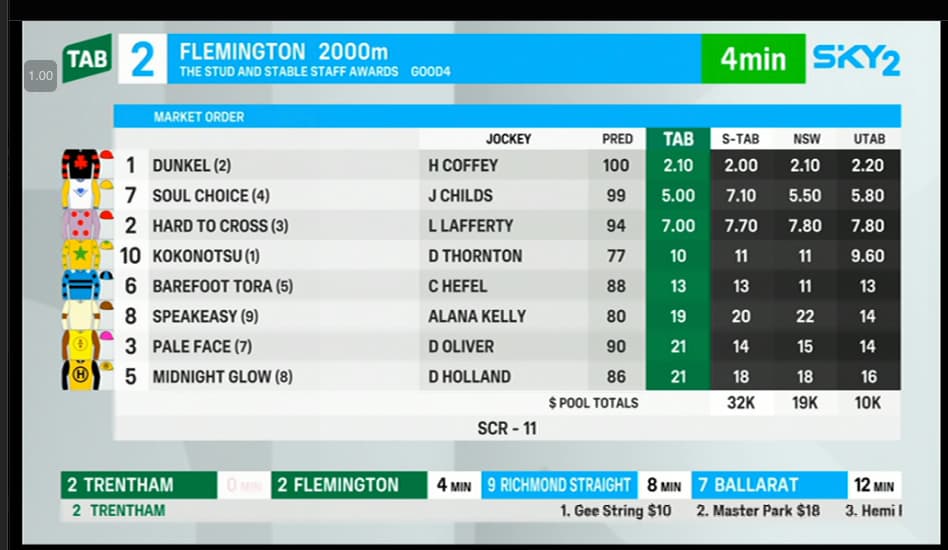 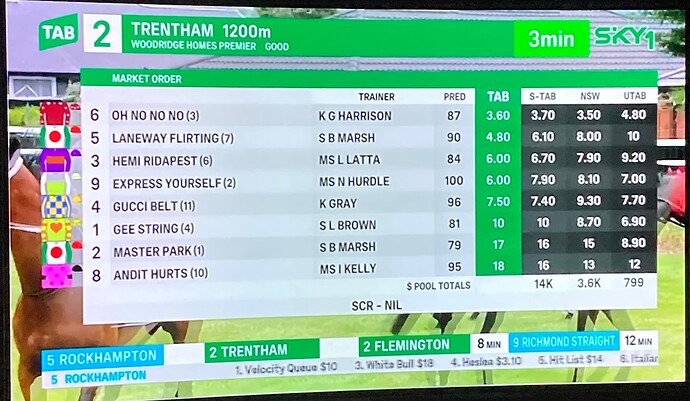 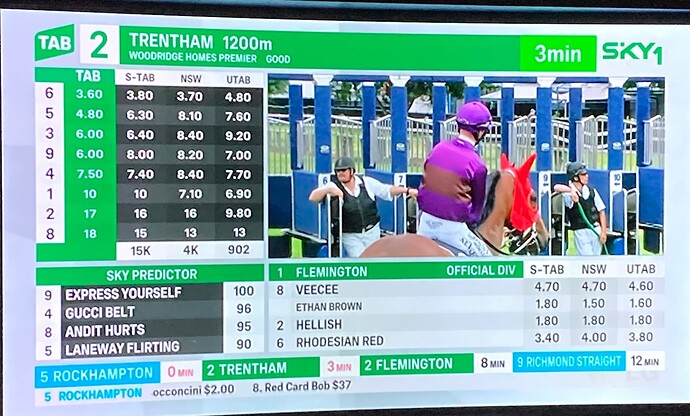 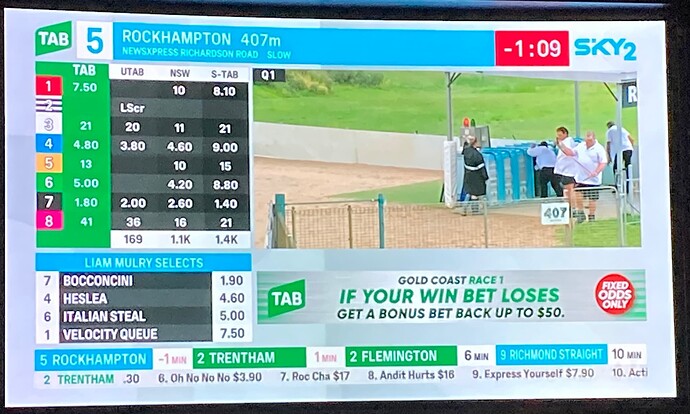 Sky Racing logo has changed. Sky 1 has changed colour from red to green. Some animation changes but overall layout is unchanged.

No changes on Thoroughbred Central yet.

Likely makes sense that they waited until their first big meeting of 2023 (the Gold Coast sales race day) to refresh.

The typeface matches what’s on their recently updated web site (logo hasn’t changed there either though).

The change to green on Sky 1 is slightly jarring after so long but it’s obvious what they’re doing given there is now the TAB logo practically full-time in the other corner. I’m not sure whether it’s more jarring that they kept Sky 2 the same colour; it’s not as big a diff as the old red/blue split.

Otherwise, purely an evolution really. They likely won’t do much until there’s anything that consolidates the three tote pools, which tbh won’t happen in the medium term (if they’ll even exist, the way things are going).

Whether the corporate bookie streams will get a feed with the TAB logo would be very interesting for those relations, but they likely have to lump it as an attribution like they would for the feeds they get from Racing VIC.

No changes on 528 their thoroughbred-only channel

It’s surprising Thoroughbred Central hasn’t updated at all. I kept flicking back over through the preview shows and first live race just in case. Oh well!

It’s surprising Thoroughbred Central hasn’t updated at all. I kept flicking back over through the preview shows and first live race just in case. Oh well!

Actually Thoroughbred Central’s most recent update brought it in line (at least typeface wise) with the most recent Sky 1/2, but on the other hand it was given its own identity and look just about, only really sharing the typeface (as much as the purple, green and orange is a bit

It’s instructive that it doesn’t even have the Sky name on the bug, and it’s not even behind a paywall as the Racing NSW home page streams it… it’s less TAB-owned in practice than it is “operated”, as it wouldn’t exist if Racing NSW and the Sydney clubs (plural at the time, now not as they’ve merged into the ATC) hadn’t had a difference of opinion with their Victorian cousins regarding TVN… making it more of a partnership between Racing NSW (and probably RQLD and maybe RWWA too now) and Tabcorp.

In other words, being more of a standalone channel and much less important from a revenue standpoint to Tabcorp than Sky 1/2, I doubt there’d be a rush to update more than maybe the typeface. There’s no real need to and they’d probably have to run it through their racing partners too.

That said, Central was a win-win for Tabcorp as they could move all their thoroughbred analysis shows there, particularly freeing up the morning spot on Sky 1/2 for more racing. It’s a bit

that the main channels now run 20.5 hours a day - I could understand 4am content for late night pubs and clubs, but 8am’s a different matter

- but they couldn’t have cleared more room without the specific competitor to the Racing VIC channel. (Although they kinda backtracked with not having a mid-morning preview show, seeing it preferable to just streaming 2KY between the occasionally sparse overseas races…)

Puts a bit of pressure on racing dot com to update their gfx now. Looking tired.

Puts a bit of pressure on racing dot com to update their gfx now. Looking tired.

And only available in SD lol.

Same with Sky 1 though. It’s beyond me why it’s not in HD on Foxtel considering how much we pay. 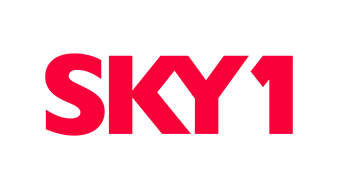 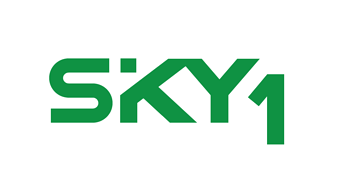 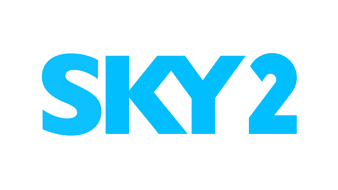 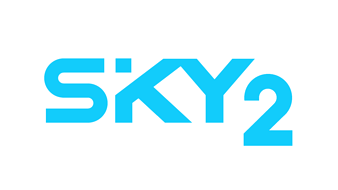 It’s beyond me why it’s not in HD on Foxtel considering how much we pay.

Obviously not. But it’s all part of it isn’t it? We just shouldn’t have to watch sport in SD in 2023

For the big meets; Everest, things like Magic Millions this week, sure - but that’s specifically why they made Thoroughbred Central the HD channel on Foxtel, to be the “showcase” channel that the likes of Racing NSW and QLD want. And that’ll be further enhanced year-round for their other Saturday races if 7two goes HD.

For the ordinary punter, especially for the dogs and trots codes - they’ll look at their race probably half-heartedly, look down on the screens or their phone to see if they collected, then move on. If they want to see it in HD (or at least 720p, I suspect it might be that even over satellite and not 1080), they’re already likely doing so at the pub or club, or on their site or app.

Ever since Sky Racing (mark 1 of Foxtel version) and Sky Channel (pub version) merged, I doubt the former has ever been a priority.

Does anyone know whether or not the HD logo is used on the new layout in Tab venues?