though the trend for Melbourne continues down. 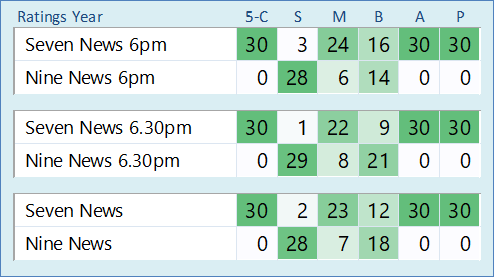 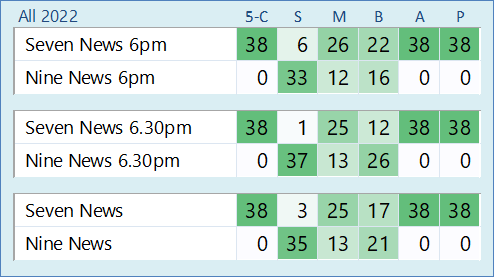 Despite or because of the extensive news coverage out of the UK this week, 6pm news numbers edged downwards.

Seven News was down 13,000 with Melbourne the biggest contributor, down 15,000, offset by small increases in Brisbane and Adelaide. Seven took out Brisbane by 4,000, winning both half hours.

Nine News slipped 15,000 with the east coast markets all down from week 37. 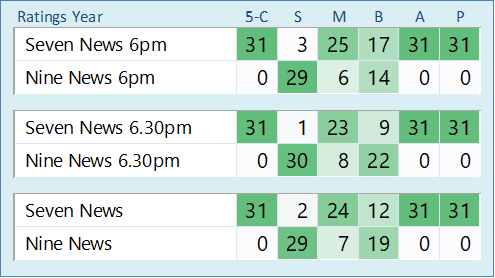 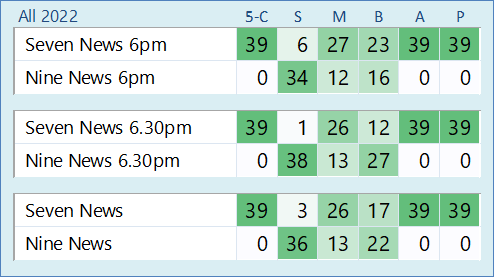 For the first time this year Nine News was below 800,000 on every night, to record its lowest 5-city rating so far this year. In Sydney, Seven News won one night and came within 10,000 of Nine.

In Melbourne, Nine was up 6,000 to close the gap on Seven. In Brisbane Nine also improved to post a very narrow win; the bulletin now on 19 weeks won for the survey.

All bulletins were down in Adelaide and Perth, Seven by 10,000 and 8,000 respectively and Nine by 6,000 and 7,000. Nine Perth recorded its lowest rating of the year and Nine Adelaide its lowest within the survey period , its second lowest of the year. 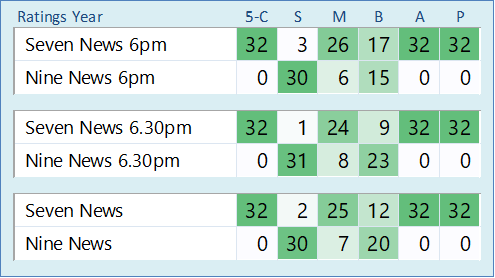 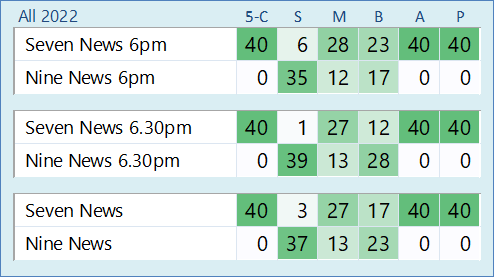 Not the best week for Seven with the 5-city audience down by an average of 15,000 while Nine was up 9,000 after losing audience for the last two weeks. Seven was still, however, 70,000 in front.

In Sydney, Nine easily won every night, as Seven lost an average of 20,000 viewers while Nine slipped by 4,000.

By contrast, Seven won every night in Melbourne and was up 6,000 while Nine edged up by 1,000 across the week.

In Brisbane, Nine reached the 20-weeks won milestone for the year, so can’t be beaten. It did this easily winning every night as Seven recorded its lowest rated week of the year so far.

A clean sweep for Seven in Adelaide with only small changes week on week.

In Perth Seven also won every night and was up 10k while Nine Perth improved 5k from week 39.

By contrast, Seven won every night in Melbourne and was up 6,000 while Nine edged up by 1,000 across the week.

Has the gap widen even further between Seven and Nine in this market?

Last time I reported the average survey audience was week 35

Week 35 average audience report Considering some of the recent discussion, I’ve prepared a tables showing average audiences during the survey period up until last night. Also included is average audience data for Sunday and Saturday viewing. This is just overnight data- add a few thousand to get 7-day. Survey Year [image] This is the data for the full calendar year where you can see how close it is in Melbourne (5,000) and particularly Brisbane (1,000) across the hour. If you take an av…

It did this easily winning every night as Seven recorded its lowest rated week of the year so far.

But realistically still not that far behind.

Not a great gap in Sydney either.

Even though Seven News can’t win the ratings period in Brisbane, it can still win the calendar year, but time is running out.