Agree - the 7 Perth numbers are less of an issue because a segment of 7’s audience was watching the AFL. 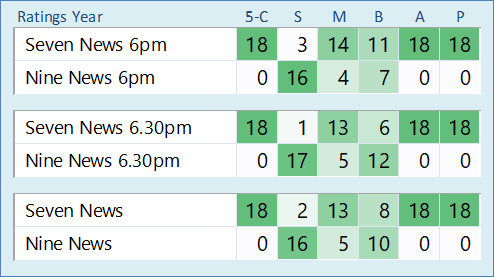 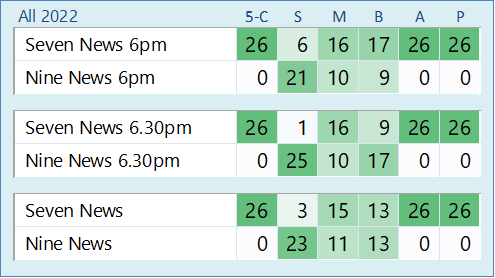 At the halfway point of the calendar year, Seven’s average audience was down 26,000 from the previous week while Nine edged up slightly by 1,000.

The biggest movements week-on-week were drops for Seven News of 25,000 in Melbourne and 13,000 in Brisbane. Seven however still won Melbourne but lost to Nine in Brisbane.

In terms of weeks won Seven looks unbeatable in two markets and Nine in one with Melbourne and Brisbane the closest contests.

Ouch for Nine News Melbourne. I think the lead in isn’t helping, with The Chase beating Hot Seat.

As promised a report on the progress of the year so far at the halfway point of the calendar.

Will post 10 and ABC later when I get some time.

The first is the promised comparison for 10 5pm and ABC 7pm News bulletins for this year to last.

This second table for Seven and Nine compares Weeks 1 26 of 2022 to the same period in 2019. I skipped over 2020 because of the large impact of COVID on news numbers noting that there was also some impact in 2021.

So 10 News First Melbourne has lost the most viewers ? Says a lot.

Recently, Seven seems to start the week off poorly and can never quite recover. 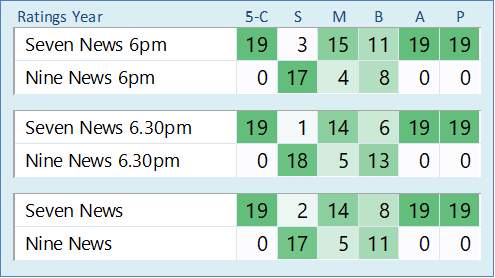 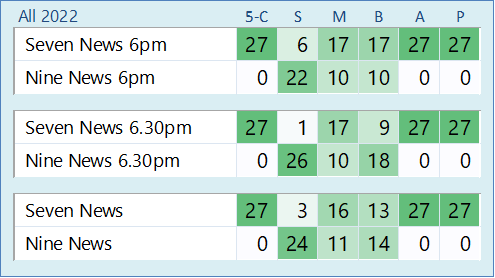 Changes from the previous week were comparatively small - Seven down 12k and Nine up 8k. Seven Melbourne was the biggest improver, up 14k with Nine Melbourne up 6k while Seven Perth dropped 21k. In Brisbane, the gap opened up slightly with Nine up 3k and Seven doen 8k from week 26.

In the calendar year battle Seven can’t be overtaken now in weeks won in the 5-city market as well as Adelaide and Perth.

In Brisbane, the gap opened up slightly with Nine up 3k and Seven doen 8k from week 26.

9 starting to pull away from 7 now in weeks won in Brisbane. The pattern used to be that 7 was stronger at 6pm, and later in the week, but it’s not winning either atm.

And this week Nine had Melissa reading solo.

Don’t think it’s so much the newsreaders… it’s the general turn off from 7… nothing really interesting or inspiring on the network atm.

And this week Nine had Melissa reading solo.

Didn’t Seven also do well earlier in the year when Sharyn was solo for a few weeks? Perhaps there is no longer the preference for the dual header in Brisbane as there once was. 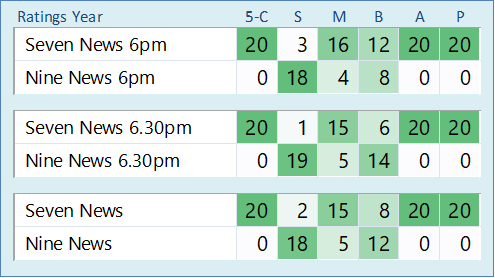 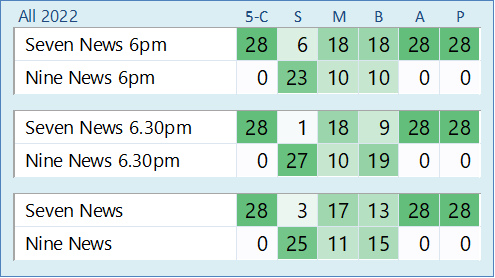 Based on weeks won, Seven can’t be beaten in the 5-city market plus Adelaide and Perth.

Later, I will post the 20-week average and compare it to last year.

The 6.30 half hour (and 7pm following it) continue to be a problem in Brisbane. It’s costing them the hour and overall lead.

Report at the halfway point of the ratings period.

The average ratings match the leading bulletin in the weeks won with Brisbane the closest market - Seven ahead at 6pm, Nine ahead at 6.30 and Nine ahead across the hour by just 2,000. During this period Seven Melbourne is 16k ahead of Nine compared to just 3k in the full calendar year numbers post a couple of weeks ago.

Perhaps there is no longer the preference for the dual header in Brisbane as there once was.

Nah they need a single presenter during the week and a double header on weekends ala Sydney, Melbourne and Adelaide 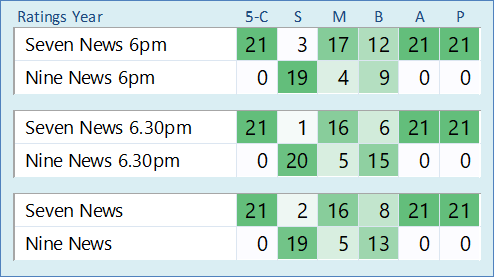 Slow news week especially with drops for the Sydney bulletins. Across the 5-city market Seven was down 40,000 and Nine was down by 32,000. Apart from Sydney, the biggest drop was Seven News in Brisbane. Bucking the trend was Seven Melbourne.

Seven has now won the 5-city market with 21 out of 40 weeks as well as Adelaide and Perth.

the biggest drop was Seven News in Brisbane.

A yearly win which looked possible not that long ago, is now slipping away.