I still don’t think the game has fully recovered from the Super League war.

Why? I barely remember the super league war and anything I do just comes from clips I watch now so as Pauline Hanson would say “please explain”.

I dunno, i just don’t think it’s as popular as it was before it all happened… i know it was 25 years ago now

I agree as some fans were disenfranchised by rationalisation/mergers - in particular North Sydney, but also Illawarra, Wests and to a degree Balmain and St George.
The league also lost its presence in Adelaide and Perth, and is only now returning to a second Brisbane team.

Yes. When the ARL and Super League joined forces to become the NRL, the extra teams that were added in the mid 1990’s disappeared in the late 1990’s.

A shame that Perth and Adelaide had to go, with no thought of having them join the comp any time soon. The South Queensland Crushers disappeared (aka Brisbane 2), but the second Brisbane team is now joining the comp (Dolphins).

With the initial 6 merged team, North Sydney was the biggest loser. Manly is better off. St George Illawarra have a mild success and a roughly even split of home-based fans. Wests Tigers should be doing better.

Bring back the Hunter Mariners

Bring back the Hunter Mariners

They were probably the least popular of all the teams, being in staunch Knights territory.

Yes, it’s a shame that Perth and Adelaide aren’t in the comp anymore, but hopefully sometime in the next 10 years or so, that will change.

My Mariners comment was a tongue in cheek comment. lol. But yes, the least popular team in the 1990s. And the Hunter/Newcastle area is too small for 2 teams anyway.

With an odd amount of teams now in the comp, i do hope that the next new team will come out of Perth or Adelaide - to even up the comp so we dont have byes.

Agree, I hate having Byes every week.

I’d say there’ll be a new team playing by 2026. Expect an announcement late next year/early 2024*. Less games = less money (obviously no change to the amount of matches from last season but you are wasting a team).

EDIT: *Whether the announcement is the exact team or at least a shortlist.

The Daily Telegraph reports St George Illawarra are exploring renaming the club by dropping the Illawarra name. Dragons members were sent a wide-ranging survey this week which included multiple questions to get a gauge on a potential name or logo change. 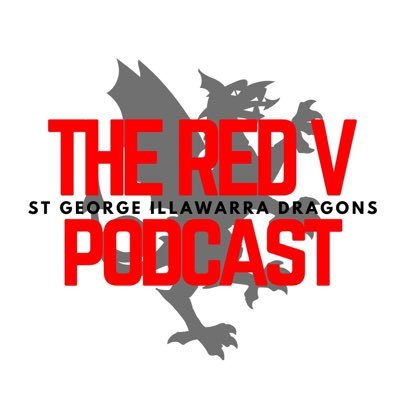 @RedVPodcast1
Some of the Questions featured in the questionnaire. https://t.co/xJJQiX9e7K 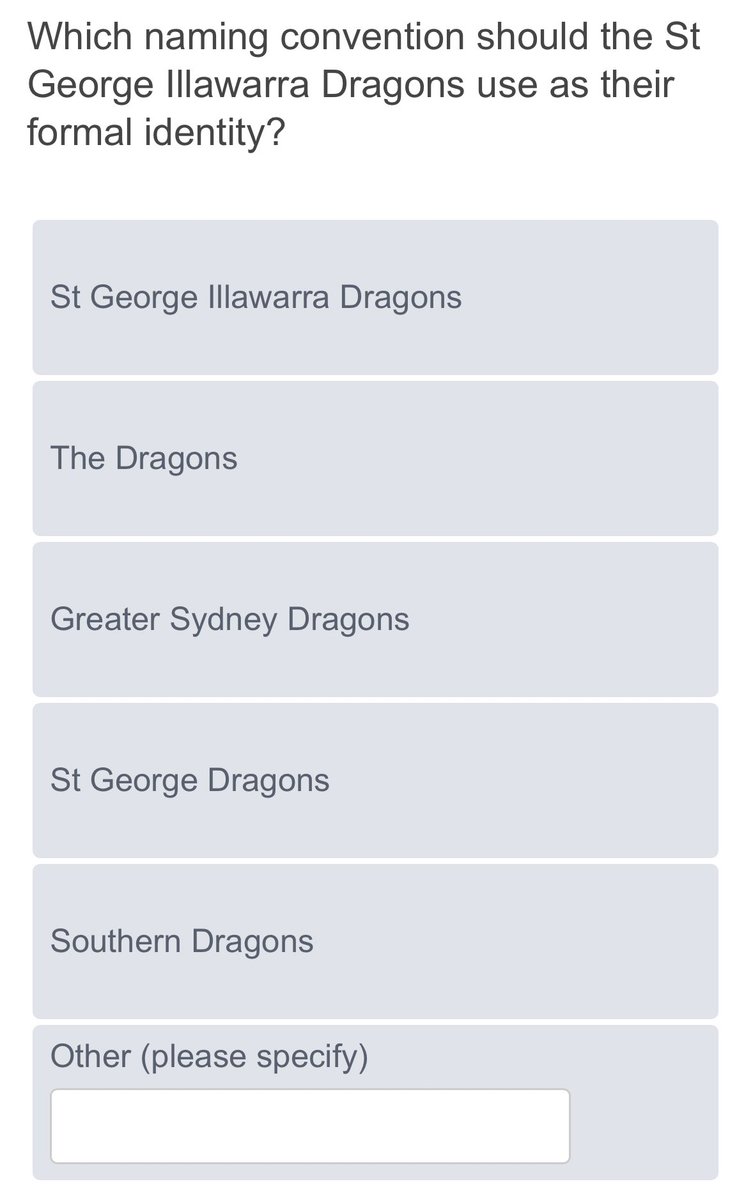 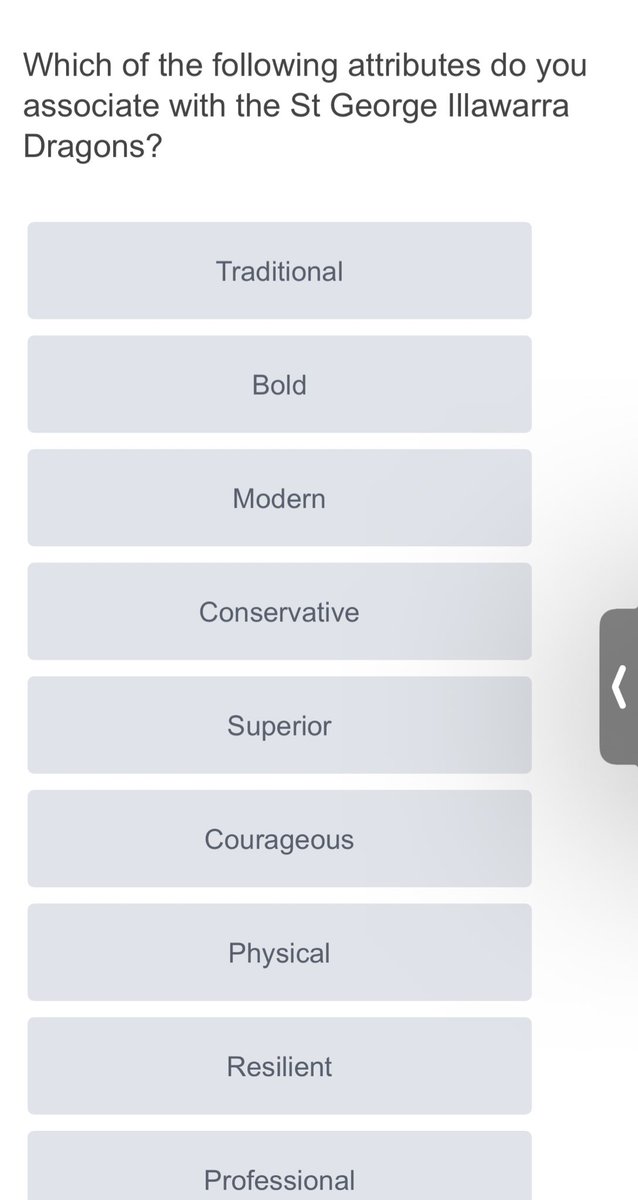 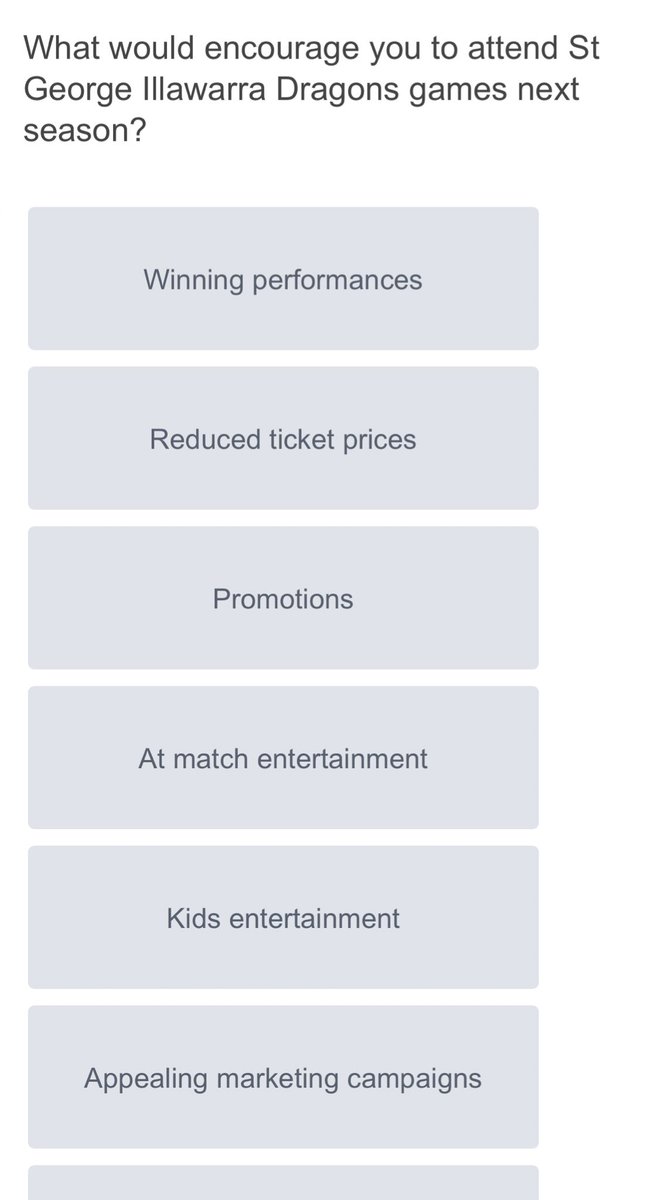 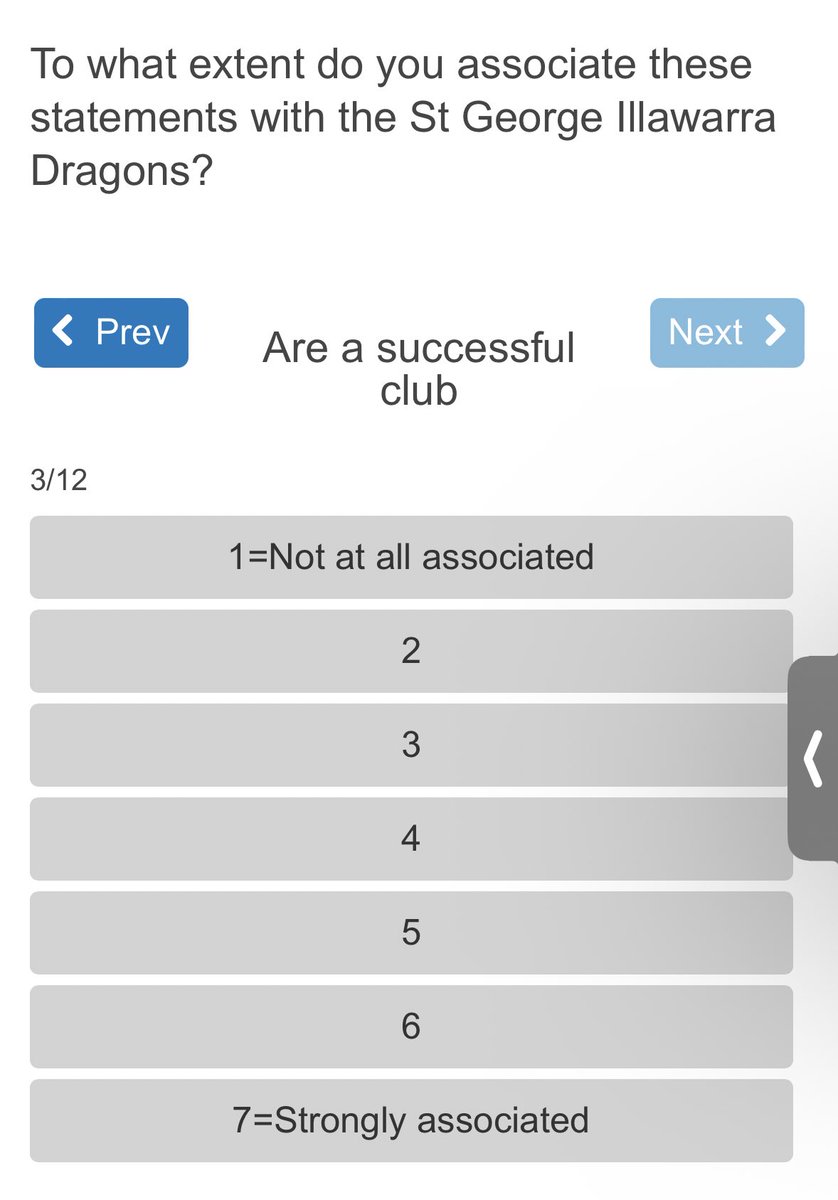 The Illawarra will be happy about that

The Dragons? That’ll be the second team in The.

I hate those generic names like *The Dragons" and “The Dolphins”, i much prefer some sort of geographical association.

Silly having an option of no Illawarra.

As a Dragons fan, i dont know why we cant leave it as St George Illawarra Dragons. Sure, it would be nice to have our 2010 premiership count alongside the St George Dragons tally, but ive finally accepted its not going to happen.

Calling them just The Dragons is boring. The Bulldogs and The Sharks did that in the early 2000s . Didnt last long and reverted back to Canterbury and Cronulla respectively.

I’d say there’ll be a new team playing by 2026. Expect an announcement late next year/early 2024*. Less games = less money (obviously no change to the amount of matches from last season but you are wasting a team).

I agree the commercial realities mean a new team will be introduced to even up the comp in the next 5 or so years, and it SHOULD be in a growth area - Perth would be perfect as it adds another timezone, it won’t. I feel like the obvious choice is a second NZ team - perhaps Christchurch.

South Sydney players completed a 15 hour walk from Redfern Oval to their new training complex at Maroubra’s Heffron Park from Monday night to Tuesday morning this week, as part of their pre-season plans. 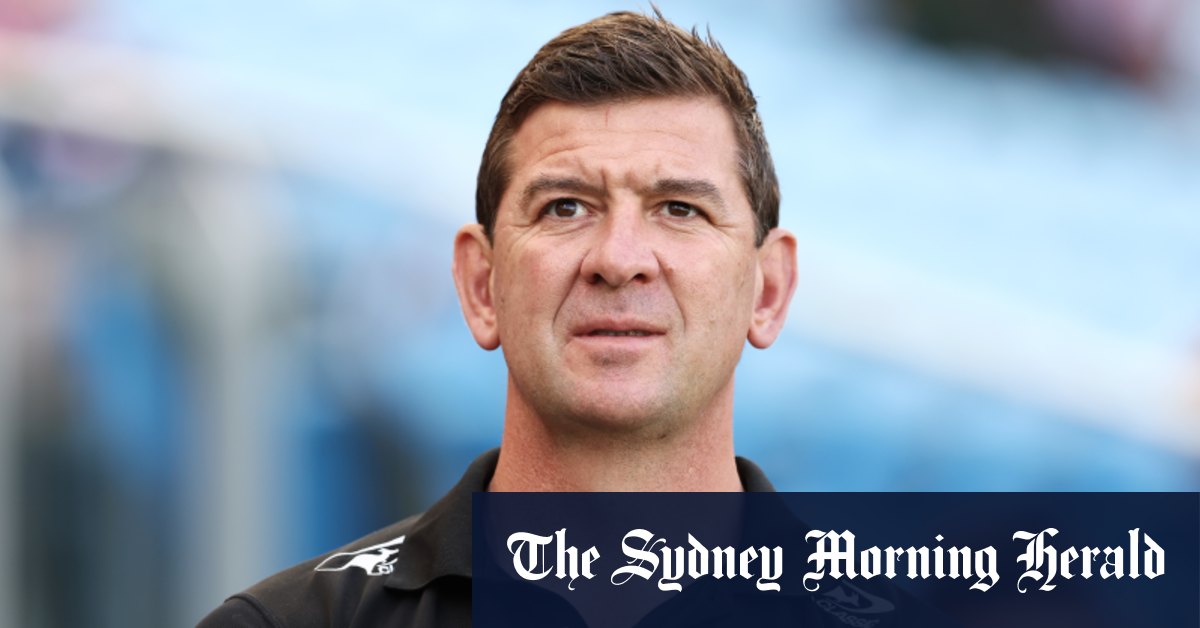 Why the police stopped a 1am South Sydney training session

South Sydney completed a 28km march through their neighbourhood on Monday night, which attracted the attention of the police. 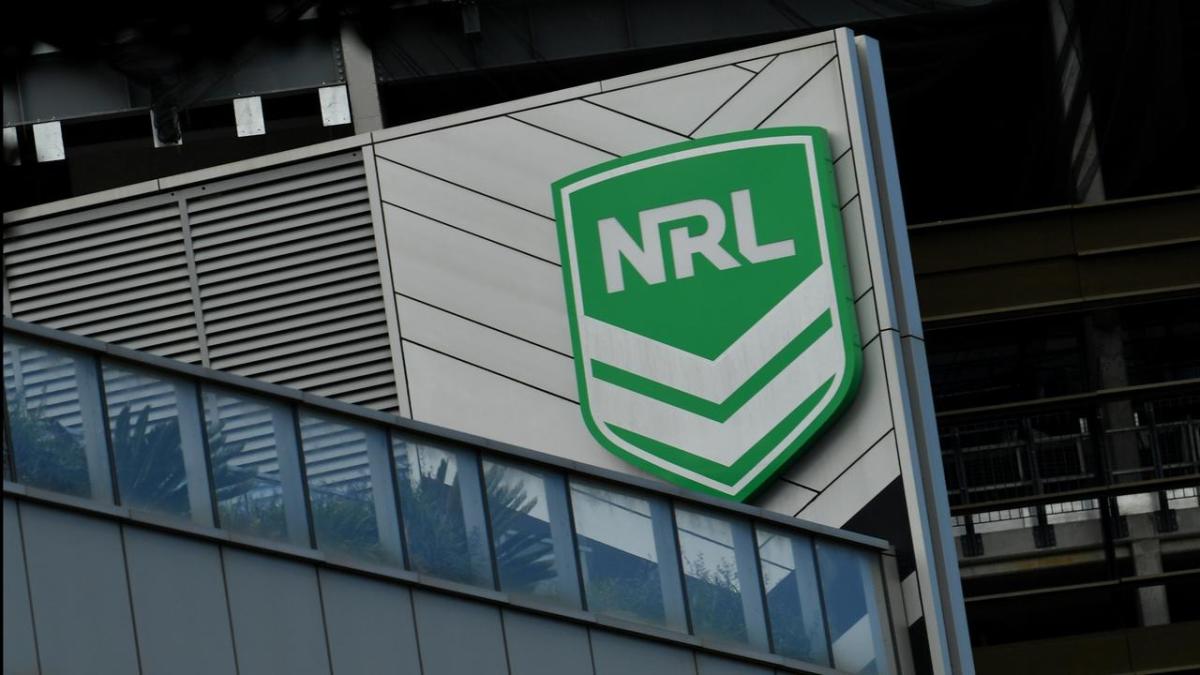 The Rugby League Players Association claim they were blindsided by the NRL's decision to release new salary cap figures for 2023, lashing out at the game's powerbrokers for "disrespecting" the players.League Central unveiled next season's salary cap...

Not really a good way to end the year… 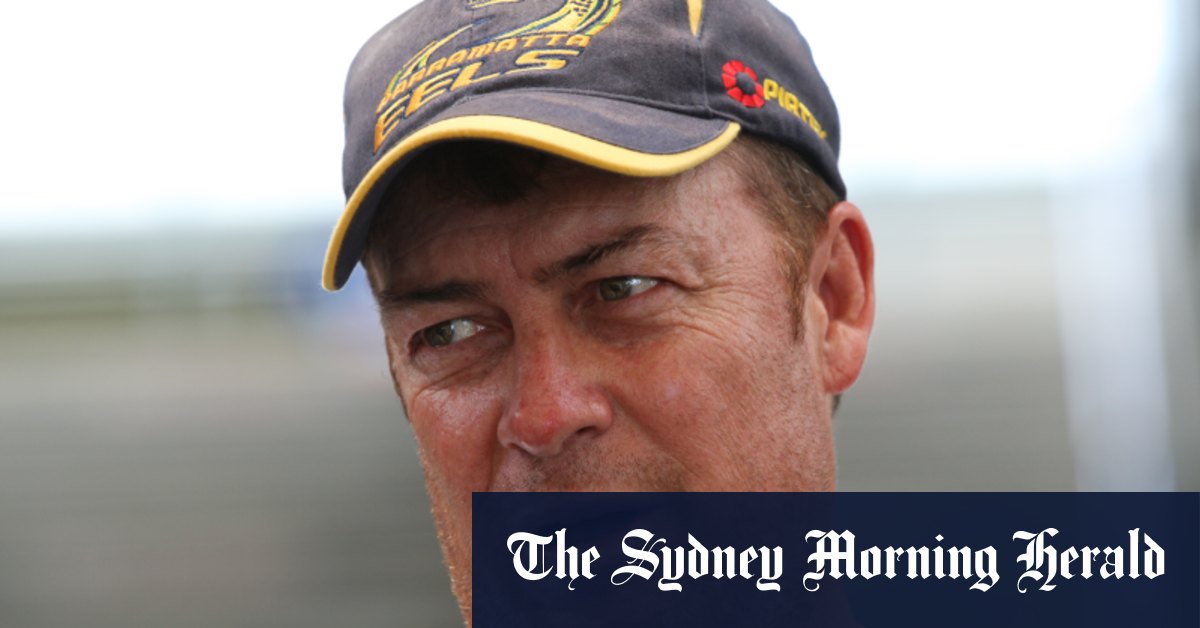 Sydney Roosters recruitment manager Daniel Anderson was dumped on his neck by a big wave while body surfing.

Hopefully he pulls through.

breaking news from the Penrith Panthers.

Premiership player Stephen Crichton will leave the Panthers at the end of 2023 season. 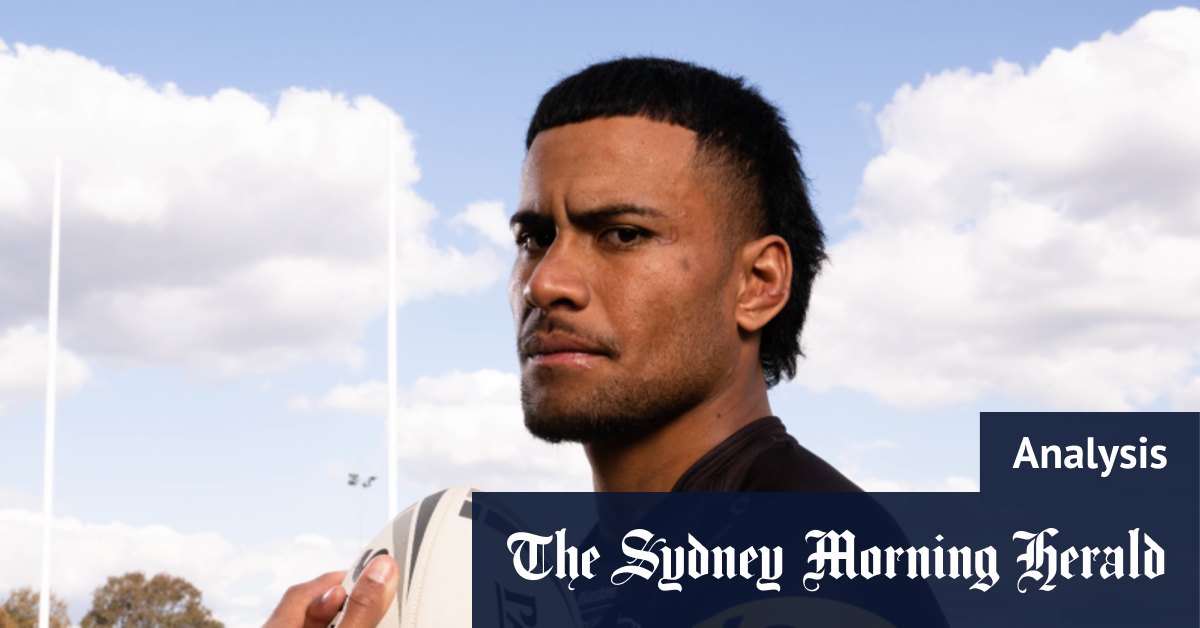 On the eve of Penrith offering Crichton a new deal, the star centre phoned coach Ivan Cleary to tell him that he was going to move on at the end of the season. 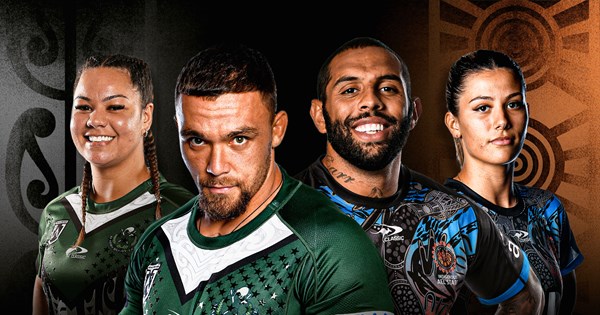 The first ever NRL Harvey Norman All Stars in New Zealand will feature Premiership and representative stars alongside some of the best up-and-coming talent in the men’s and women’s games.