We have an AFL.thread in this topic, but no NRL one? (I couldn’t find one).

To kick things off, who will the 2018 premiers be?

It looks pretty open to me, I think it will come from this lot… Souths, Dragons, Storm, Roosters, Sharks and the Broncos. Though that’s not exactly narrowing things down much. Though I wouldn’t rule Penrith out completely…

Before we kick off, can I just say no code wars?

There isn’t any of that in the AFL thread (which is always a good read), so I’m not expecting that here.

Good idea for a thread!

Personally it would not overly surprise me if the 2018 NRL Grand Final is between two Sydney teams (or 1.5, if you consider the Dragons to be half Sydney half Illawarra) - the NRL and Channel Nine would love that to happen I reckon.

But from a sporting point of view, probably any combination of the Storm, Rabbitohs & the Sharks would make for the most interesting Grand Final?

How did Tommy Raudonikis, John Dorahy, Les Boyd and John Donnelly miss out!!

I was Western Suburbs Magpies all the way back then.

The NRL has tentatively booked the two Los Angeles stadiums (Banc of California Stadium and Starhub Center) in line to stage the historic American kickoff on Saturday, March 10, 2019.
https://www.dailytelegraph.com.au/sport/nrl/teams/rabbitohs/nrl-finalising-plans-to-take-matches-to-the-united-states-in-2019/news-story/1cafcee86b54a964ffc744f52f01d566

Fond memories watching the fourth game in the 1987 State of Origin series in Long Beach on Nine, who did a delayed telecast iirc. The poster in California advertising the game:

A spear tackle promoting rugby league??
A tackle like that would get you an 8 game suspension these days.

What were they thinking?

Melbourne Storm star Billy Slater has confirmed he will retire at the end of this season, following a report in today’s Herald Sun.

Next year’s NRL All Stars game will be between Australian Indigenous All Stars and New Zealand All Star Maori team in a women’s and men’s doubleheader at Melbourne’s AAMI Park on Friday, February 15. It will be shown live on Nine/9Gem and Fox League. An All-Star New Zealand Maori team will square off against the Australian Indigenous All Stars in a mens and womens double-header in Melbourne next February to open the 2019 NRL season.

New Zealand Warriors will play in the NRL finals for the first time since 2011, after beating Penrith 36-16 at home tonight.

And with last nights’ surprise win by the Broncos over the Chooks, that has meant that the Top 8 has been decided, with only the finishing order to be determined.

And todays results has gone a fair way to determining that…

Looks like the Sharks will now get 4th spot, with the Dragons taking a significant hit to their For and Against, meaning they are unlikely to finish any higher than 5th.

The Storm look like they will be minor premiers.

…and realistically, there’ll most likely be at least one Sydney team playing for the premiership on September 30.

With their position on the ladder, the Melbourne Storm will hang around until at least Week 3 but I can’t see the Broncos or Warriors making much impact during the finals.

The Broncos are striking good form at the right time of the year, and look more dangerous than any other team in the bottom half of the eight.

But I think it will be too difficult for them to win from outside the Top 4.

But it looks pretty even to me between the Storm, Bunnies, Chooks and Sharks. Assuming Melbourne win in week 1 of the finals, they will get to host the week 3 Grand Final qualifier in Melbourne and be very hard to beat down there for one spot in the Grand Final.

Head says Storm vs Rabbits grand final (Roosters have gone off the boil of late and will miss Dylan Napa for the first 2 games in the finals).

Just reading about this on the News Ltd site…

Sydney Roosters are the minor premiers of 2018 after beating Parramatta 44-10 tonight. Melbourne was leading the competition going into this weekend, but they lost to Penrith last night. This meant the Roosters had to beat the Eels by 27 points or more to overhaul the Storm on points differential, and the tricolours achieved it easily.

The finals line-up have been decided after Brisbane thrashed Manly this afternoon. 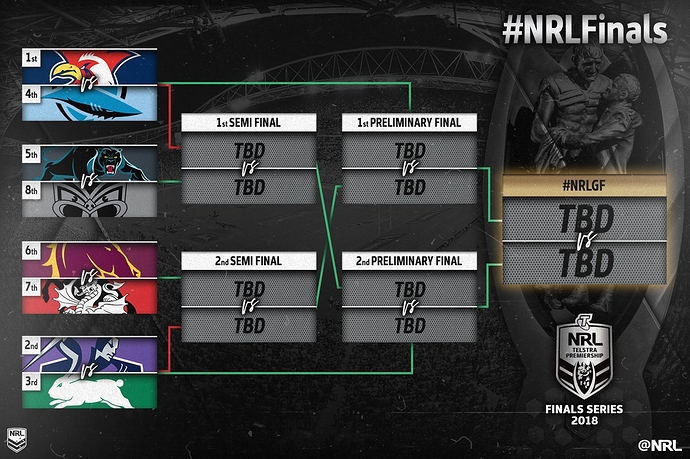