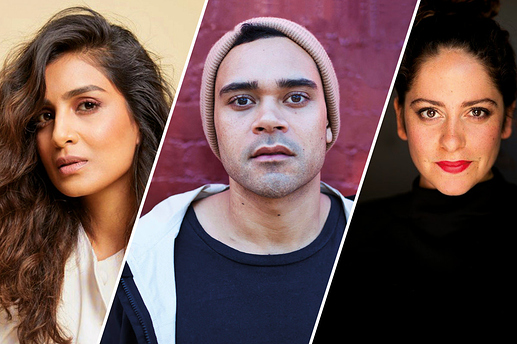 ABC and Screen Australia are thrilled to announce that the new six-part narrative comedy series, Retrograde , premieres Wednesday 8 July at 9.30pm on ABC and iview. Developed, produced, and post-produced entirely under strict COVID-safe guidelines, Retrograde follows the lives of a group of thirty-something friends as they drown their sorrows at a virtual bar in the time of COVID-19.

Gemma is about to embark on an exciting career in Korea when COVID-19 crashes her farewell party. Faster than you can say “social isolation” she’s made unemployed and has to find a place to live — like, yesterday. Thankfully she hadn’t got around to dumping her boring but nice boyfriend Rob, so she can lockdown with him — and his daughter. Even at 32, adulting is not something that comes naturally to Gemma and to make things worse her ex has returned to Australia and is back on the (online) scene. At least she doesn’t have to drink alone. Her friends have created an online bar where they can commiserate and workshop their questionable life choices. Gemma is forced to take a good hard look at herself in the preview window — and work out what she wants her life to be in lockdown world and beyond.

Series Co-Creator, Meg O’Connell said , “T he COVID-19 lockdown means the characters in Retrograde are finally having the existential crises they put off having in their twenties. They’re being forced to look at their reflections in the mirror (or video call) and are asking themselves: Do I like what I see?”

Sally Riley, ABC’S Head of Drama, Comedy and Indigenous said, “Making scripted content means it’s not always easy to respond in the moment to the terrifying events and changes in our world. But we’ve reimagined the way we make drama and comedy to bring Australian audiences a show that illustrates the very real impact the pandemic has had on life as we know it. Crossing humour with a layer of existential dread, Retrograde tracks from beginning to end our journey of the first wave of lockdown.”

Senior Online Investment Manager at Screen Australia, Lee Naimo, said, “We’re excited to support this team who have responded so quickly to the strange new normal with an incredibly innovative and clever series. Retrograde brings our online lives into focus and introduces a new kind of viewing experience to Australian audiences, and I can’t wait to see it.”

Watched this last night. Had no idea it was even on. I missed have missed any publicity for it.

It had some good writing in it and some very funny stuff but I think the concept of just having the characters perform to the screen as if they were in a Zoom meeting might get boring once the novelty wears off. It’s very limiting like Squinters was.

Good work for everyone involved though, producing this show in lockdown conditions.