Nigella Lawson will appear for less than half of the 16 episodes of the rebooted My Kitchen Rules, meaning she only appears for the first round of the show. For the second round of heats, Matt Preston joins Manu.

However, Colin Fassnidge and Curtis Stone were drafted in to adjudicate the show’s finals after Manu apparently come down with the flu and had to go to hospital.

Well that’s the reboot done then. No consistency whatsoever.

It should have been dropped earlier. Not every home has a doorbell and not every doorbell sounds the same.

I could still remember when Pete and Manu visited a home during an instant restaurant round, they actually rang the small bell at the front gate.

Colin Fassnidge and Curtis Stone were drafted in to adjudicate the show’s finals after Manu apparently come down with the flu and had to go to hospital.

It should have been dropped earlier. Not every home has a doorbell and not every doorbell sounds the same.

Yeah, I think you’ve missed the point. It was a gimmick of the show, it added some drama, was synonymous with the judges arriving and was clearly added in post production.

It wasn’t meant to be real.

It wasn’t meant to be real.

Well that’s the reboot done then. No consistency whatsoever.

As long as the contestants are likeable I don’t think it needs consistency with the judges. Simply saying it’s done is a bit of a reach. 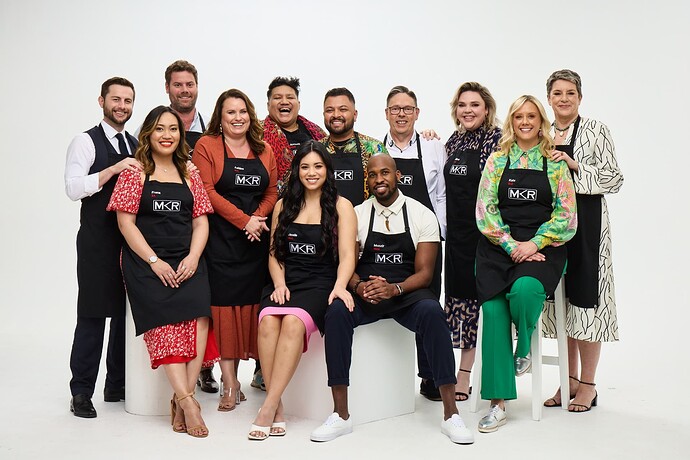 Meet the MKR 2022 teams and share their food dreams before Australia’s favourite cooking show, MKR**,** returns for an exciting new season starting 7.00pm Sunday, 7 August on Channel 7 and 7plus.

In the attached media kit, discover each team’s delicious signature dish, their kitchen superpowers, the fave ingredients they can’t live without, and their deal-breaker foods (hint: offal). Uncover how each team learned to cook and what brought them to the pressure cooker MKR competition.

Iconic food writer and queen of the kitchen, MKR judge Nigella Lawson reveals her criteria for awarding a perfect score of 10, her favourite home-cooked dish and what it’s like to share the head of the MKR table with fellow judge Manu Feildel.

MKR royalty Manu shares his opinion on the biggest mistake teams can make in the kitchen, the ingredients he was happy to see plated up and what he loves most about MKR after judging the competition for 12 incredible seasons.

The new season of MKR takes the much-loved show back to the original recipe: real people from all over the country, cooking real food in their own homes for the judges and their fellow contestants. 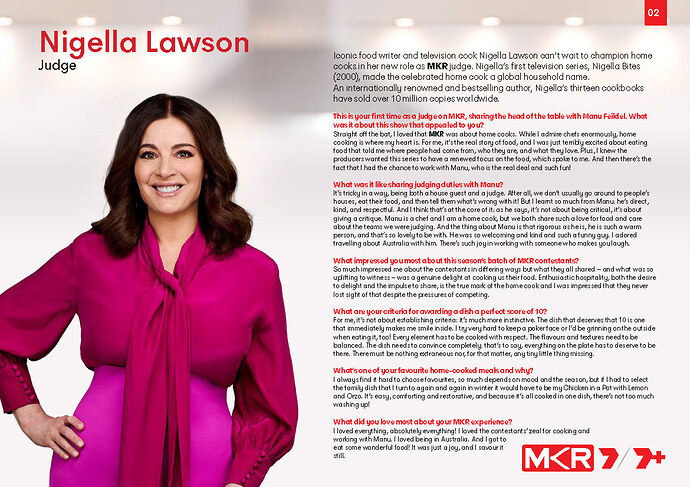 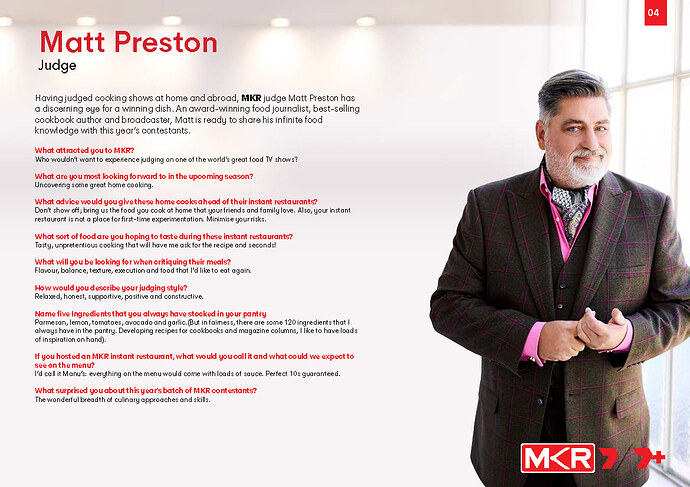 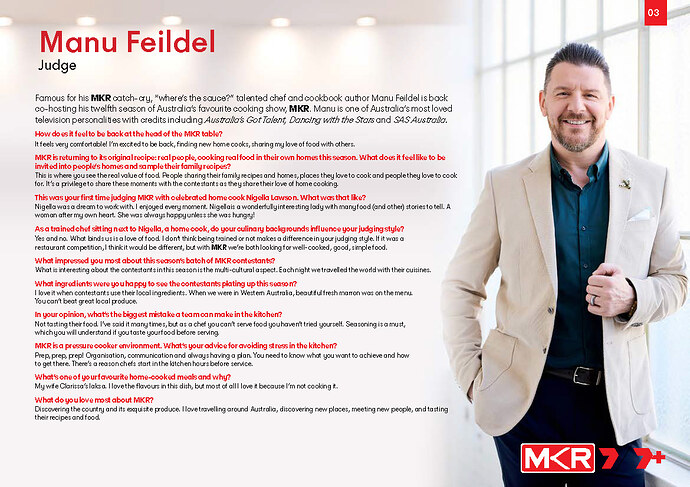 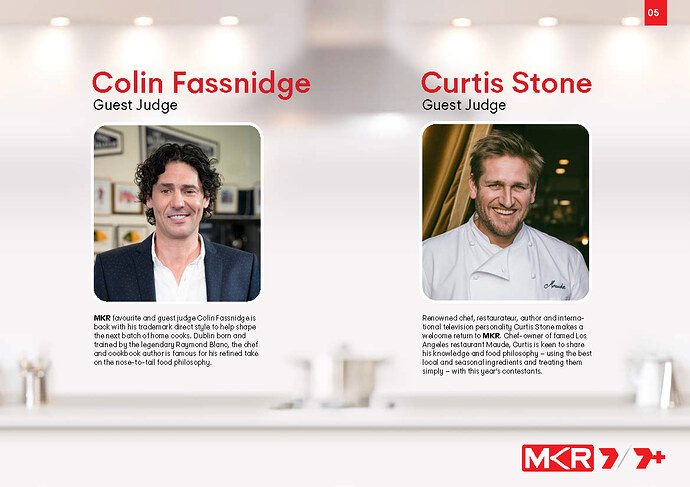 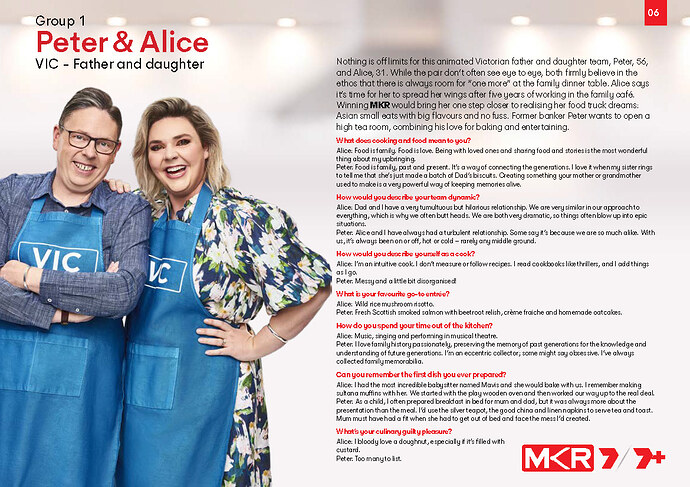 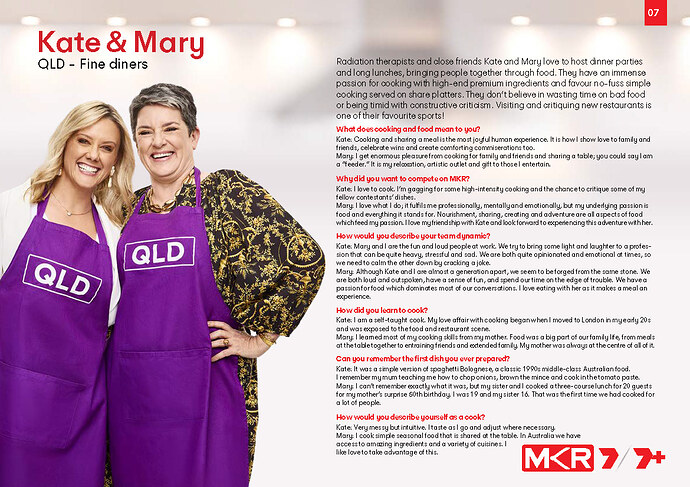 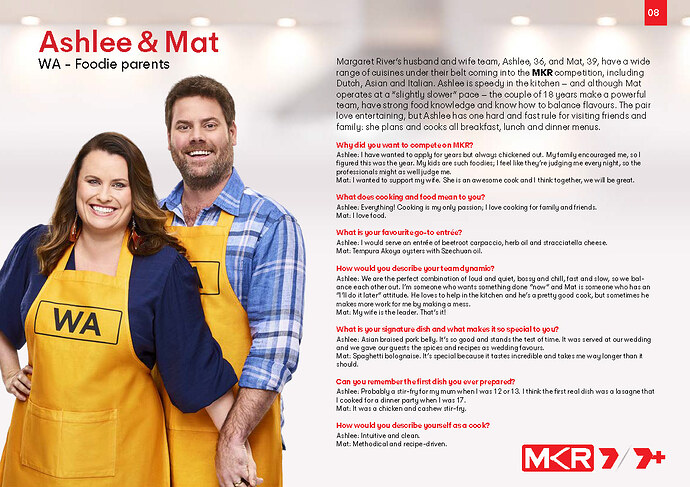 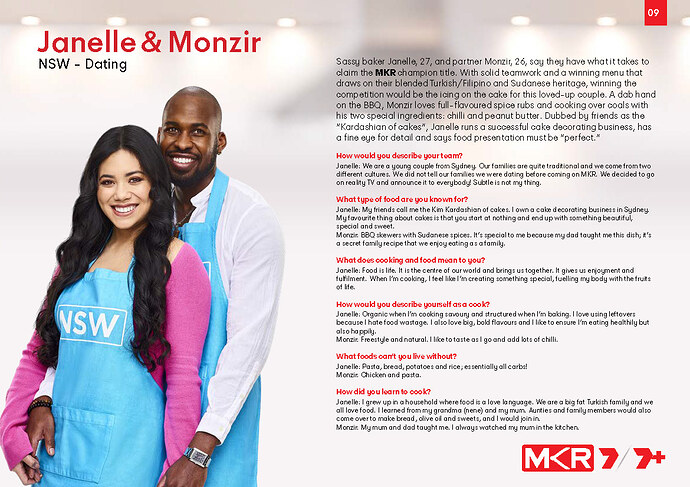 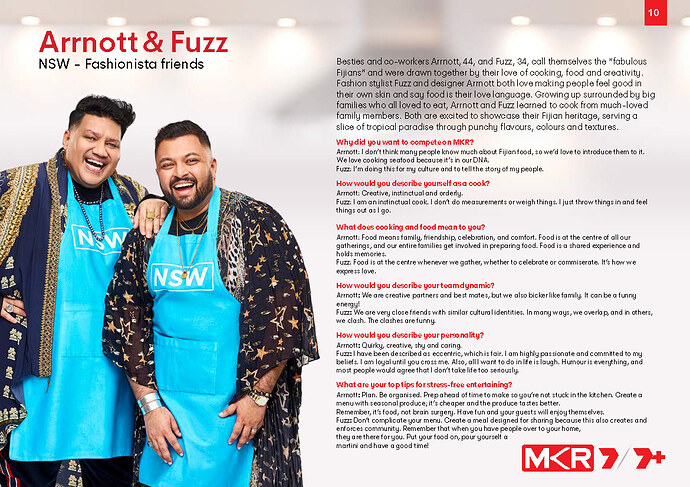 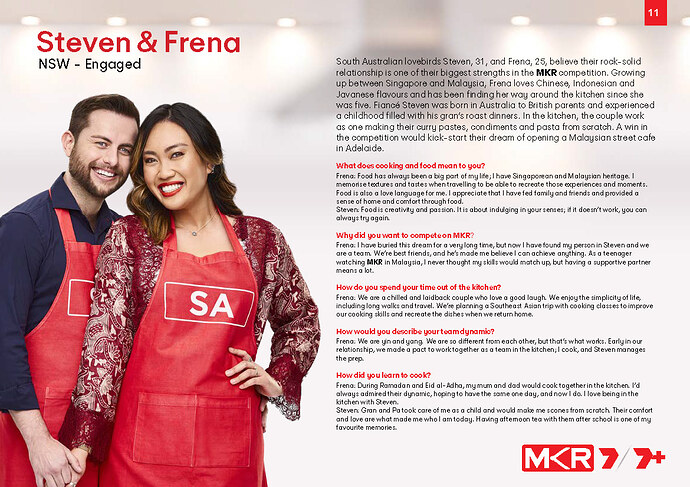 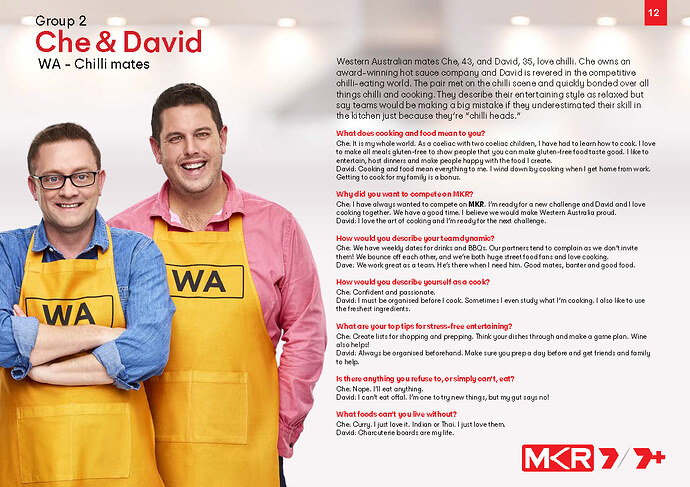 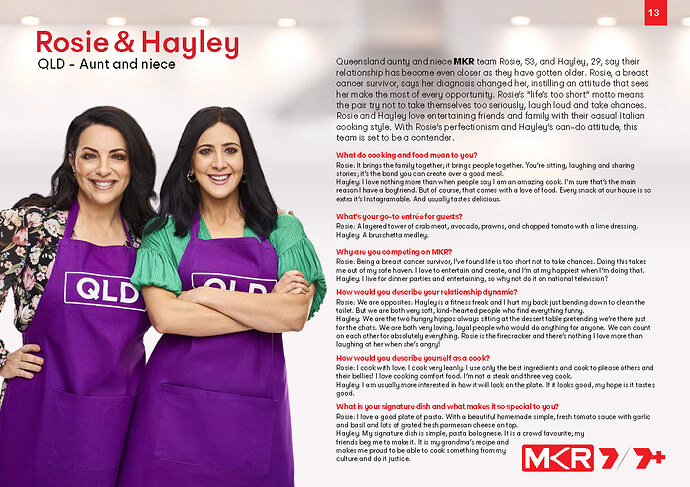 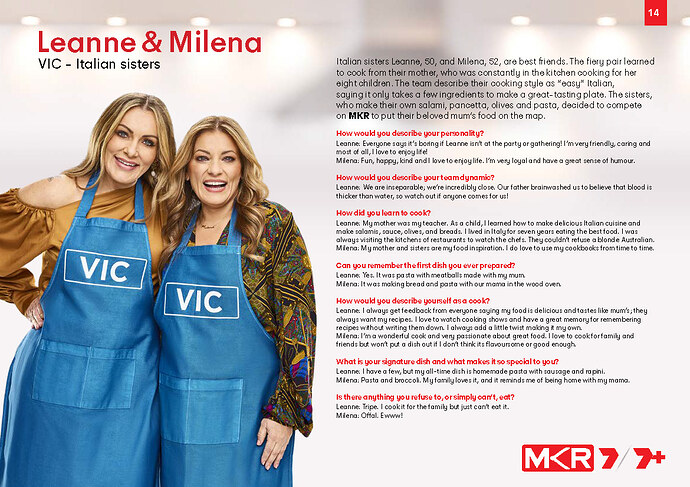 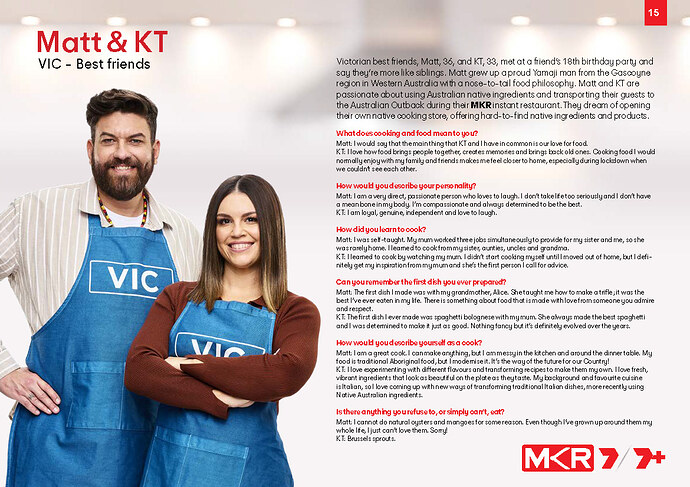 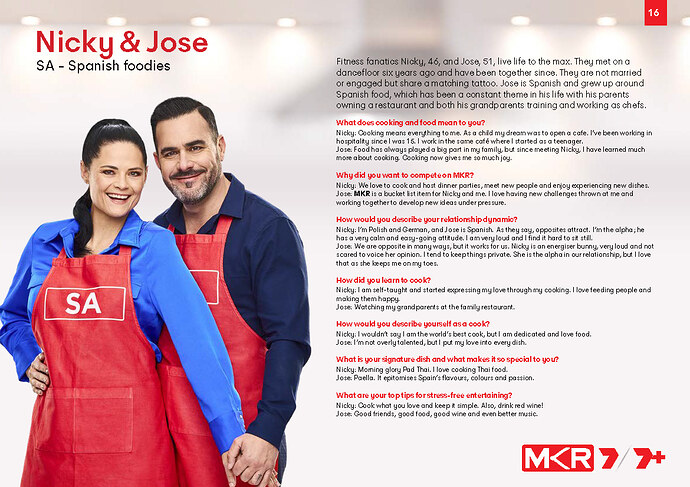 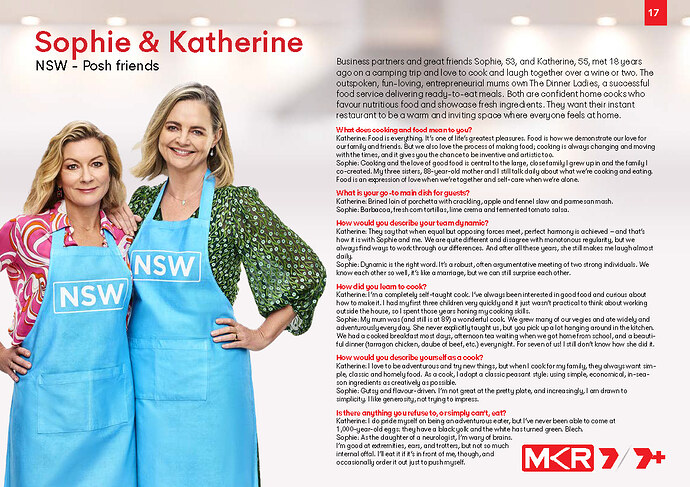 I am really looking forward to the return of MKR. I am not ashamed to admit that I am a BIG fan. I don’t mind a bit of drama (who doesn’t love them!!) incorporated into the show as long as it is not over the top like the last couple of seasons which led to its temporary demise.

Looking forward to having an ‘old friend’ back onto our screen

Given there are 12 teams this season, and four teams already revealed, Seven should be promoting the other eight teams during its Commonwealth Games telecast.

Seriously? We are already at this point of reality tv casting?

We’re way past it. We’ve had reality show contestants across multiple franchises already. Also, actress Sharon Johal from Neighbours is a contestant on The Block this year with her husband. 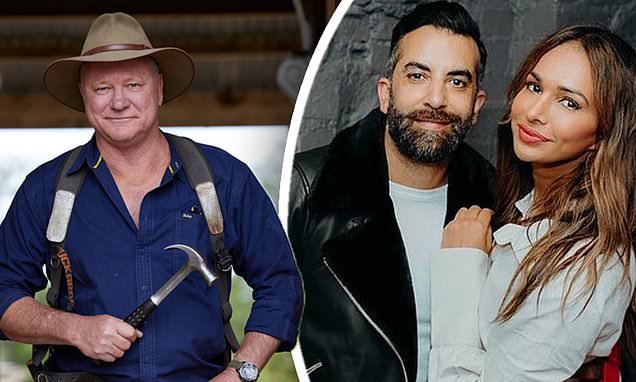 Neighbours star Sharon Johal is set to join the The Block

Remember the days when it was just Beryl from the local fruit and veg shop, and Jason the local mechanic? I miss the casting of the average everyday folk - why does it have to be has-beens and influencers nowadays

Id really love to know the thought process behind it. Like, do they think we will be attached to them because they have been on other shows? I don’t even recognise any of the names. Especially those two ‘influencers’ who quit.

A radio competition is already underway, before the new season even begins. 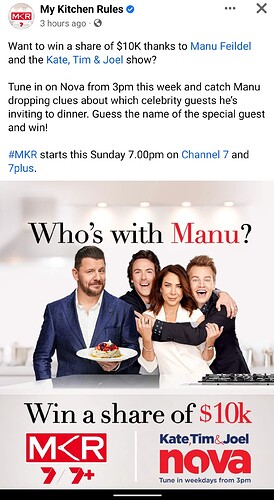 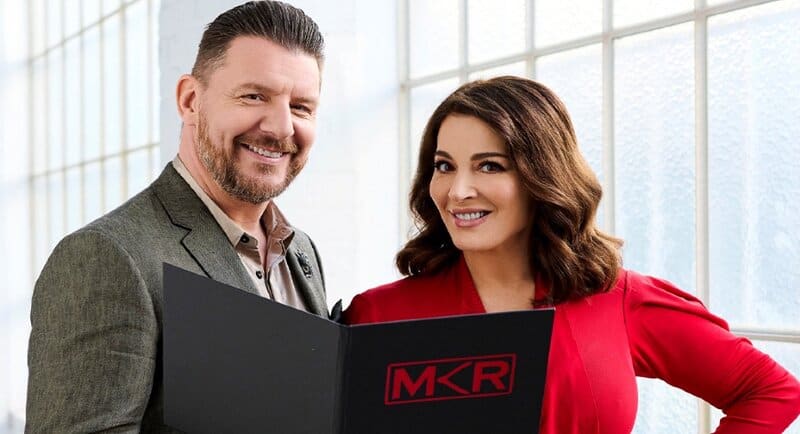 Home cooking is back on the menu as My Kitchen Rules makes its grand re-entrance onto Aussie screens, kicking off for a new season August 7.

Manu and Nigella appeared on Sunrise this morning to talk about the new season. Manu appeared in person while Nigella crossed live from London on late Thursday night local time. 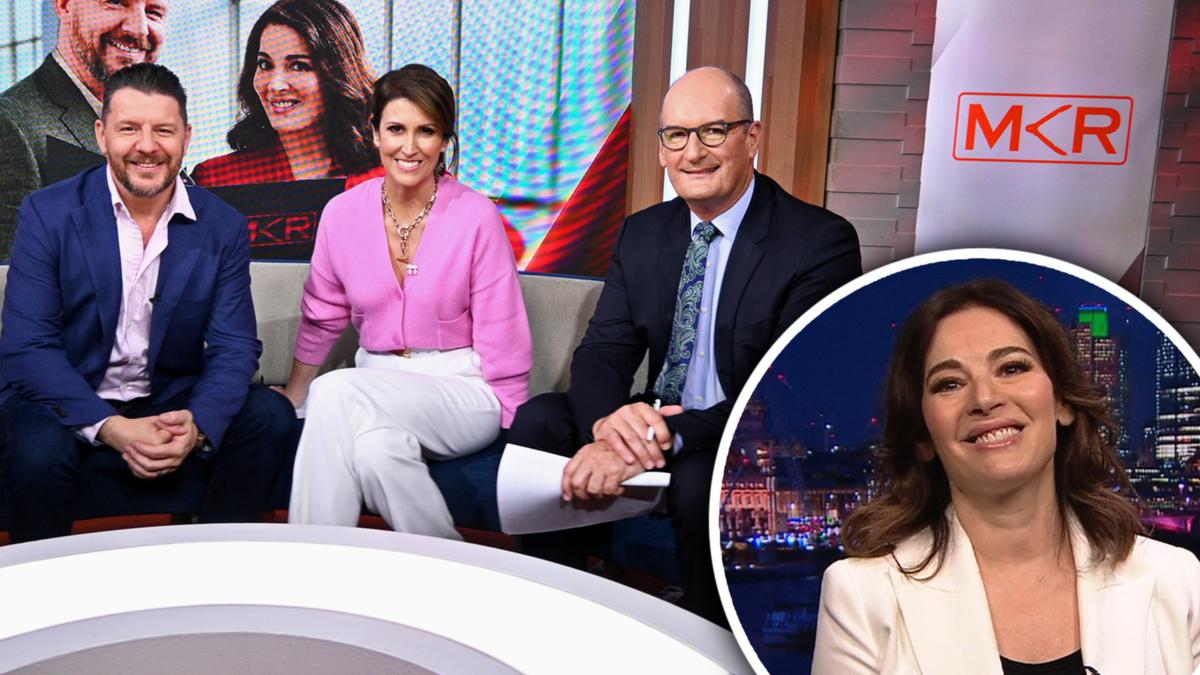 MKR is back for a brand new season with one big change for 2022.

Manu will appear at Brisbane’s Ekka this Sunday, August 7. 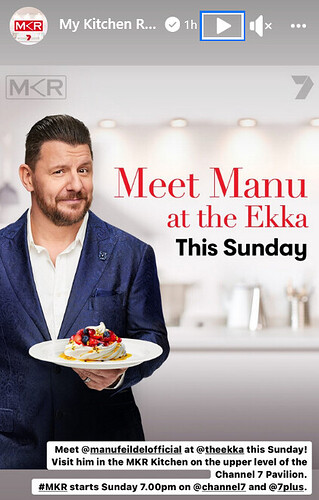 Remember the days when it was just Beryl from the local fruit and veg shop, and Jason the local mechanic? I miss the casting of the average everyday folk - why does it have to be has-beens and influencers nowadays

The average Joe doesn’t make the headlines though. Throughout the series expect controversy, drama, previous life drama’s magically resurfacing etc. Will be news articles about the contestants daily. I guess that’s the strategy that been signed off on.

I really don’t think that is actually a wise move. I think the average Joe sort of lineup is the best way toward for the series that will actually result in better ratings.

Will be interesting to see what happens when Nigella departs. Either she costs a fortune or had a tight schedule.

I wish they would focus more on the food vs contestants instagrams. First couple of series was hooked. Was farewell when the fake drama and influencers arrived.