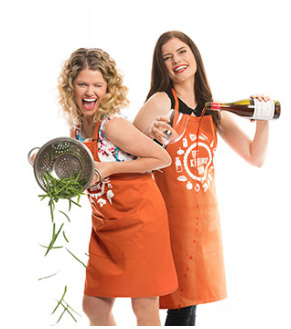 Having conquered the cut throat world of satirical online cooking shows, The Kates (McLennan and McCartney) are ready to take their trademark sassy swipe at breakfast TV with Get Krack!n’.

With no sense of on-camera technique, the Kate’s will shuffle through a roster of unsafe demonstrations, surly guests, underprepared experts and the over-lit decomposition of the duo’s already rocky relationship. Like any televisual format that The Kates put their rough, manly hands to, things on Get Krack!n’ will go downhill fast. Frankly, whatever the hour, an audience deserves better.

Runs for: Eight x 30min episodes, on ABC and iview

It’s time to Get Krack!n - A Kate way to start your day!

Having conquered the cutthroat world of satirical online cooking shows with The Katering Show (ABC TV’s all-time most watched digital series), the two Kates are ready to take a Sassy Swipe at morning lifestyle television in Get Krack!n, a new 8 x 30’ series for the ABC.

Each ‘morning’ the Kates will shuffle through a roster of unsafe demonstrations, surly guests, underprepared experts and the over-lit decomposition of the duo’s already rocky relationship. McLennan and McCartney will leave no cultural touchstone unturned, even though they are in no capacity qualified to speak on them, or on anything for that matter.

As always, neither of the women has any sense of on-camera technique; while McCartney’s Daria-esque enthusiasm is a total mis-match to the bright and breezy format, McLennan’s hosting is imbued with a fetid air of desperation. The show should be McCartney and McLennan’s big break, but like any televisual format that the Kates put their rough, manly hands to, things on Get Krack!n will go downhill fast.

The Krack Heads Are Back As Kameras Roll On Get Krack!n Season 2 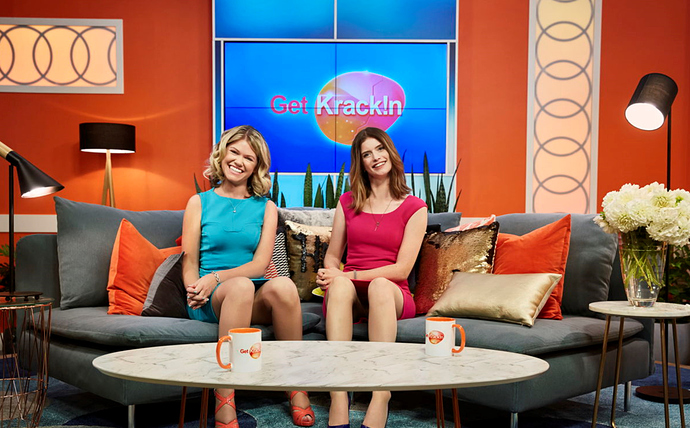 ABC, Screen Australia and Film Victoria today announced that filming has begun in Melbourne on Season 2 of comedy series Get Krack!n - created, written, produced by and starring Kate McCartney and Kate McLennan.

Follow-up to ‘The Kates’ now classic webseries The Katering Show, Get Krack!n Season 1– hailed by critics “the finest satire ever put to air on Australian television”- was a breakout hit, continuing the ABC’s long tradition of fostering new talent and leading the way with world class comedy programming. Get Krack!n also enjoyed the youngest audience profile of any main channel show in 2017.

Now the morning show that made you want to go straight back to bed returns with another 8 x 25’ krackpot episodes. Like the cheap shape-wear adorning their bodies, The Kates bring their ill-fitting brand of hosting back to the chirpy, fresh, bright world of brekky TV.

Despite the loss of a sponsor, the incompetence of the crew, the femaleness of the hosts, and a pretty devastating structural fire, it seems Get Krack!n is back for more apocalypse-dodging content. And no-one is more surprised and fatigued by this fact than the show’s hosts, “trained” “actor” Kate McLennan and “personality-challenged” Kate McCartney.

“We are so eggcited to be back. We can’t wait to be in the studio again, catering to the direct interests of our biggest fans, straight white men aged 18-55", The Kates said.

ABC Head of Comedy Rick Kalowski said, “Get Krack!n Season 1 drew all four key TV demographics: fans of great satire; young people delighted to learn the ABC existed; angry old guys who just got Facebook; and people who only watch shows that offend them. Get Krack!n Season 2 will give all something to love/find ‘deeply problematic’.”

“The strength and appeal of this satirical series comes from the creative team’s commitment to not only including writers and performers from diverse backgrounds but ensuring that those people have ownership of their stories and experiences,” said Sally Caplan, Head of Production at Screen Australia. “Screen Australia previously supported the team’s online series The Katering Show, and it’s fantastic to see them grow their audience on TV with this new, timely and topical take on morning television.”

Film Victoria CEO Caroline Pitcher said “We welcome ABC’s next exciting installment from Melbourne’s creative all-rounders in Kate McLennan and Kate McCartney. Their unique approach to comedy writing delivers hilarious and unforgettable characters with content that speaks directly to a female audience. We look forward to seeing what the duo has in store for breakfast television this time around.” 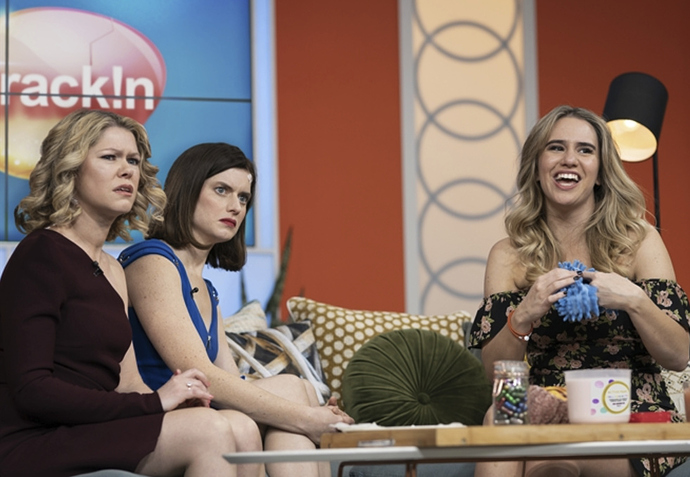 This season of Get Krack!n’ will be audio-described, available both in broadcast on Vision Australia Radio - the RPH stations in Melbourne & Victoria, Adelaide and Perth - and in podcast form.

#GetKrackin now comes with audio deskription! Not sure what it is? The Kates explain plus how you can katch it on @visionaustralia. Wednesdays 9.30pm - Melbourne, Victoria and Perth Wednesdays 10.30pm - Adelaide Podcasts will be available from Thursdays https://t.co/e0tA5DqF9d
2 Likes
Community Radio
JohnsonTV February 6, 2019, 4:14am #6

So it appears it is in effect a radio version of Get Krack!n’, with the actual audio description television version on iview? The ABC and the rest of the television industry in Australia needs to try harder.

So judging from last nights episode, they did a piss take of TODAYs “We Love Australia” tour and are going to have a lot of very small cameos this season from Australians biggest comedians but not utilize them to their full extent.

But that’s part of the joke. They are utilising them exactly as they want to.

Anyone see a slight resemblance between the worm on Get Krack!n’ and the worm on The Book Place? Can’t remember any of their names through.

yeah the book worm. the super underneath said legal had cleared it. I notice now its MA and all they do is swear for the laughs, if anyone swore as much as them on live breakfast TV they would be pulled off air or at least censored the best they can but I guess thats the joke?

I do love Genevieve Morris but she really only does one character, she’s always Barb from Bankworld just in a different outfit for each role

Some screenshots from the first two episodes. 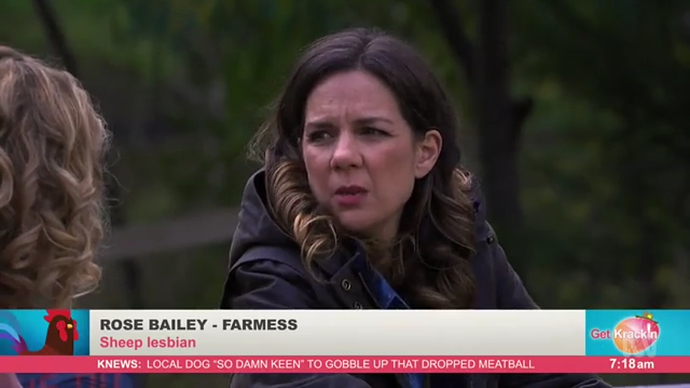 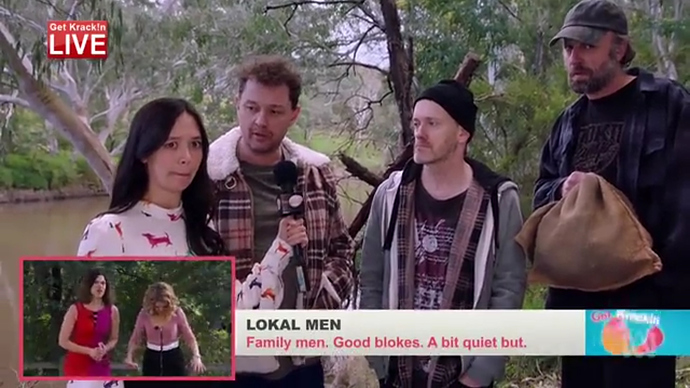 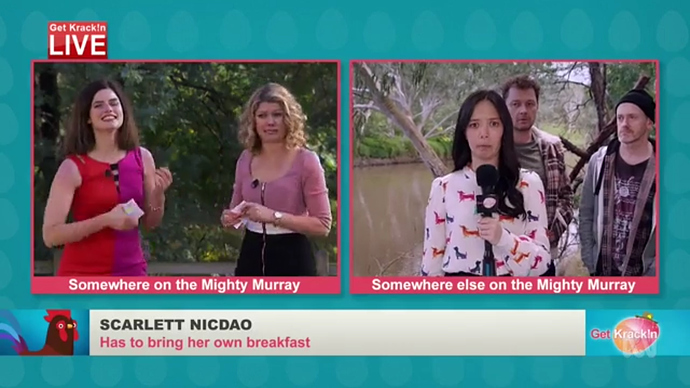 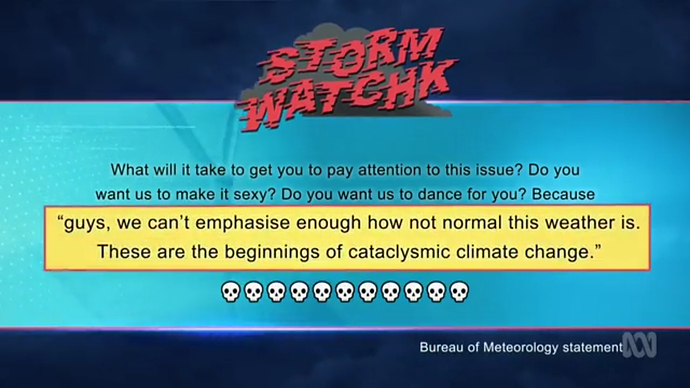 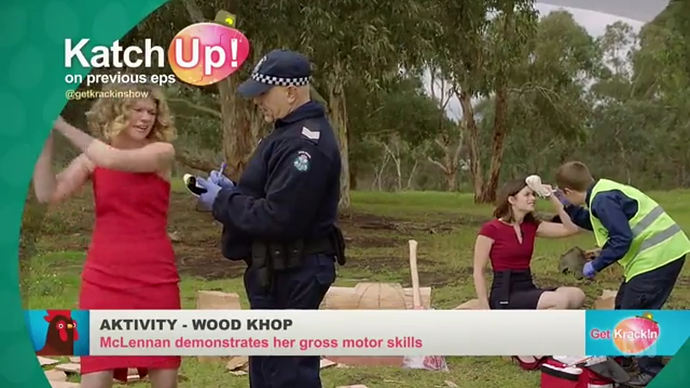 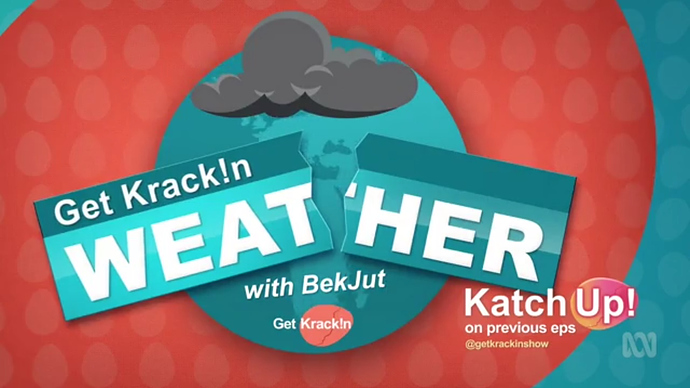 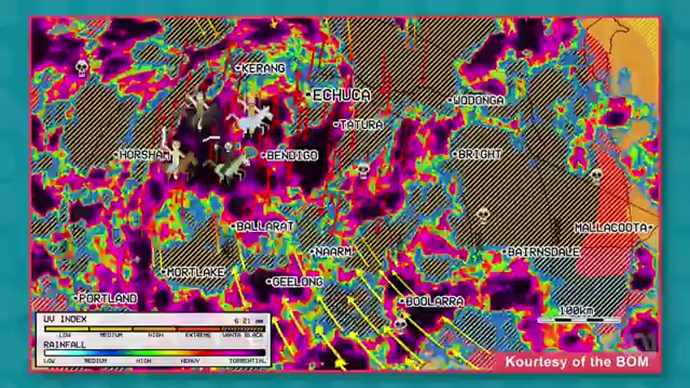 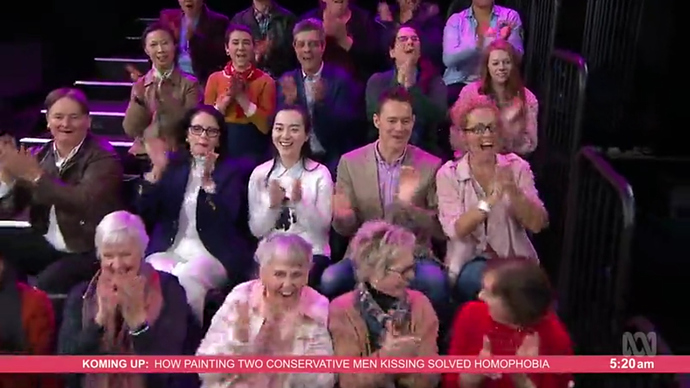 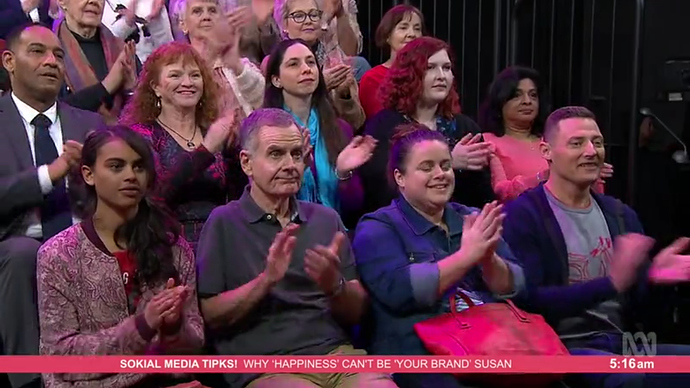 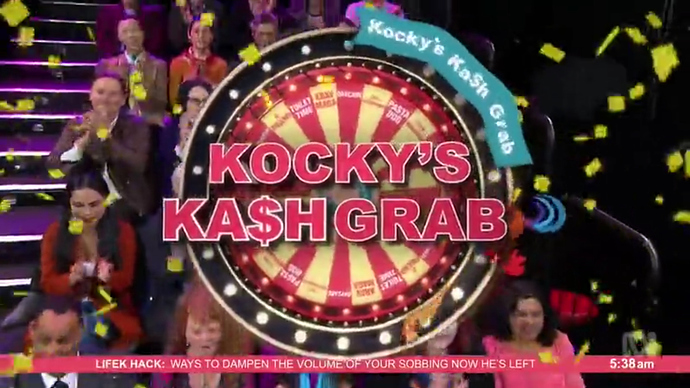 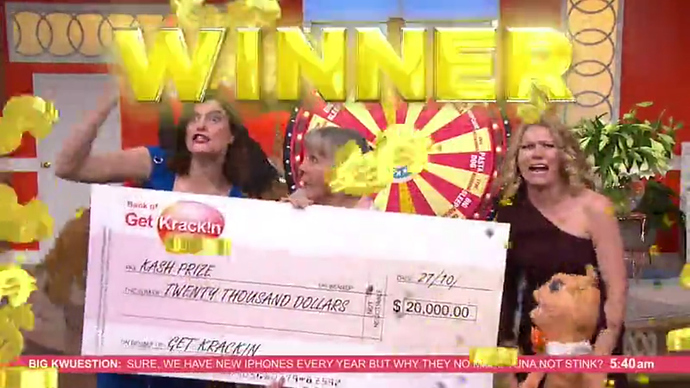 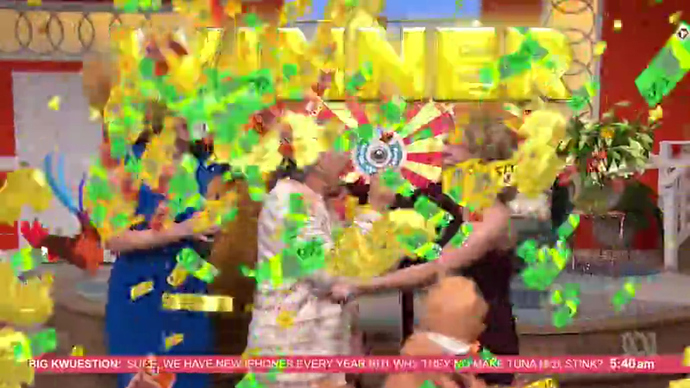 The two Kates must watch a lot of Studio 10 for research.

most the stuff comes from the Today show compilations on Youtube

I co-wrote an episode of @getkrackinshow with the amazing @tigervsshark and @katemclennan1, and they’re holding a screening of that episode with @ExpressionAus on Wednesday Feb 20, for the Deaf Community. There’ll be a Q&A, too. You can watch the ep at 9pm AEST on @ABCTV, too 🎉 https://t.co/NVijUHmIWm 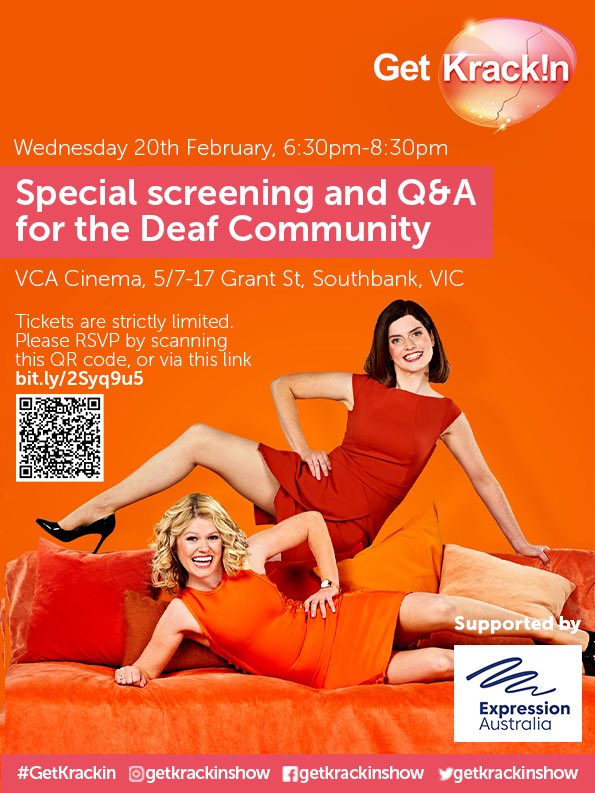 Fantastic initiative (again) by Get Krack!n’

Hope this triggers a more widespread approach to accessibility by other shows.

Campaspe Shire Council is planning to lodge a complaint with the ABC, saying the first episode of the current season (filmed in Echuca) was disgraceful and could negatively affect tourism in the area. Echuca Moama Tourism had also written a letter to the producers expressing its concern about the episode, but received no reply.

AN OUTRAGED Murray River Council will write a letter to ABC complaining about a ‘‘disgraceful’’ episode of satirical morning show Get Krack!n which they say could negatively affect tourism in the twin towns.

I wouldn’t worry too much. No-one seems to be watching.

I’m surprised it even got a second season. They just seem to recycle the jokes every week. Should have left it at one mediocre season.

It is Australia’s number 2 breakfast show