I don’t have Foxtel, certainly refuse to get it for cricket and he would’ve had even more FTA exposure (being a higher rating network) if on Seven.

He did excellent work on Ten for an ex-cricket great with minimal broadcast television experience, perhaps not having the full reign (with Mel/Roz/Howie) but at least this will give him ‘chief’ title at Foxtel cricket.

The Richies will morph into the Gillys one day?

The Richies will morph into the Gillys one day

I’m very interested to see what he does, the paper today said he would cover both BBL and Internationals.

In particular, what does Brendan Julian, who has been leading Fox’s cricket coverage for years, do now? They’ve groomed him as their main presenter but now Gilly has swooped in on that role.

Cricket on Fox is probably big enough for two lead presenters but its going to be interesting to see how they use both of them together (if they do).

I don’t think one of Australia’s most well-known retired cricketers is chasing FTA exposure. 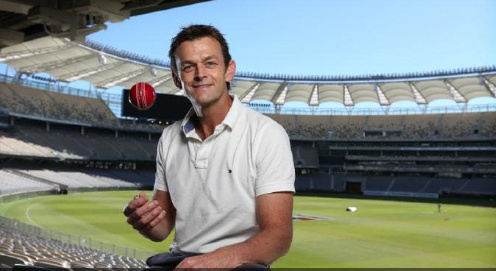 The former Australian Captain is the first major signing following this month’s announcement that FOX SPORTS, exclusively on Foxtel, would become the home of cricket for at least the next six summers.

He joins FOX SPORTS’ cricket experts Allan Border and Brendon Julian with more commentators set to join the network as part of the biggest shake-up in cricket broadcasting.

Gilchrist said he can’t wait to lead the new look coverage: “Sport has been a major part of my life, as a player and now a commentator, so to join a network that is 100 per cent focused on sport is something I am extremely excited about.

“FOX SPORTS’ new partnership with cricket has seen a big commitment to the game – a game that I clearly love – and I can’t wait to be a part of the family.

“It’s a changed landscape for cricket coverage in this country, where viewers have more choice and more variety than ever – and this will be great for the game.”

Foxtel and FOX SPORTS CEO Patrick Delany said: “Gilly is one of the most loved cricketers of all time. He will lead the FOX Cricket coverage working across all three forms of the game.

“Fans love his opinion and analysis, the way he combines pure class and humour.

“In the same way he set a new standard for what a wicket-keeper/batsmen did in today’s game, Gilly will be the perfect person to front the most innovative cricket coverage on TV.

“We are building a formidable team and the only place to watch is on Foxtel.”

Coverage will be live, ad break free during play and in HD on a new dedicated channel, FOX Cricket, which launches later this year.

All men’s Test Matches, One-Day and T20 Internationals plus every game of the Big Bash League will be shown LIVE and available to stream. Women’ cricket will receive unprecedented coverage with Women’s Internationals and 23 WBBL games LIVE.

FOX SPORTS will broadcast the Prime Minister’s XI plus for the first time, fans can watch the Governor-General’s XI LIVE.

FOX SPORTS’ cricket coverage will include Australia’s Test and ODI Series against Pakistan beginning October in the UAE.

In particular, what does Brendan Julian, who has been leading Fox’s cricket coverage for years, do now? They’ve groomed him as their main presenter but now Gilly has swooped in on that role.

Brendan could still host Fox’s coverage of Australian tour of UAE later this year to face Pakistan, but after that who knows? Could he be signed by Seven or radio networks covering the cricket this summer?

He’s a better looking version of Hamish McLachlan, viewers on Seven will get confused!

Seven flagged way back at the presser they’d already been in talks with people / had people calling them that day.

So wouldn’t be surprised if both Seven and Fox have already locked in many commentators, but are just waiting to formerly sign or announce?

Signing personality is something that must be done relatively quickly above all else I’d imagine, given the competition (Seven vs. Foxtel).

Seven might have been waiting to poach David Barham from Ten first before deciding their commentary lineup.

Funded using some of that government handout, probably.

Is it possible we see Brenton Speed commentating the cricket? Seems to be everywhere these days…

The Sunday Telegraph reports Fox’s cricket coverage will be ad-free during play, similar to its coverage of AFL, NRL, soccer and rugby union.

Is it possible we see Brenton Speed commentating the cricket? Seems to be everywhere these days…

The Sunday Telegraph reports Fox’s cricket coverage will be ad-free during play, similar to Sky Sports’ cricket telecast in Britain.

Don’t know why the ST thought that was a story - Fox said that would be the case when the rights announcement was made.

The Sunday Telegraph reports Fox’s cricket coverage will be ad-free during play, similar to Sky Sports’ cricket telecast in Britain.

Does that mean there are no breaks at all between overs (ads only at intervals and drinks breaks), or are there ads after every 2-3 overs as Fox generally do with international matches?

It was originally stated there will be no ads during play, iirc, which means ads only during lunch, tea and change of innings, I’d think.