I’ll bite. Why is the Nine logo featured in the Fetch guide for a show airing on SBS tonight that was originally produced in the UK for the BBC? 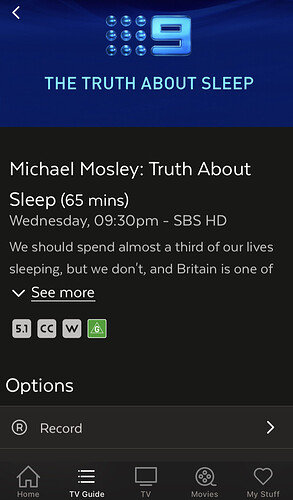 Didn’t it air on Nine before?

Telstra partners with Fetch to evolve its home and entertainment offerings...

Telstra today announced it had entered into an agreement with Fetch as its new platform for Telstra TV and to evolve Telstra’s home and entertainment proposition.

The transaction is subject to ACCC approval and other customary conditions precedent.

Telstra TV launched in 2015 with a focus on bringing together a wide range of streaming services for our customers and today has around 800,000 active subscribers, operating on the Roku platform.

The Mighty Gen 4 PVRis powered by the latest in chipset and Wi-Fi technology, and represents an upgrade to the very popular Mighty Gen 3 PVR.

I have a Fetch Mighty since July 2016 and it works perfectly. No issues at all from day one

Opposite for me. I’ve gone through I think 3 since 2019 (technically 4 but I had to change one when I changed my internet over).

The ACCC will not oppose the proposed acquisition of 51.4% of Media Innovations Holdings Pty Ltd (Fetch TV) by Telstra Corporation Ltd (ASX:TLS).

The ACCC’s review focussed on whether Telstra would have the ability and incentive to foreclose competing broadband retailer’s access to Fetch TV.

“Our investigation found that entertainment offerings are one important way for broadband retailers to differentiate themselves from competitors,” ACCC Commissioner Liza Carver said.

“With this in mind, it is unlikely the proposed transaction would lead to Telstra foreclosing rival broadband providers,” Ms Carver said.

Several broadband retailers, including those that offer Fetch TV, also supply other entertainment offerings or other inclusions. For example, SubHub by Optus allows customers to combine and save on subscription video on-demand services like Netflix.

“Less than 10 per cent of retail broadband customers in Australia acquire Fetch TV services from their retailer and there are a growing number of ways in which consumers access and consume entertainment content, including through smart TVs without the use of a Set-top-Box,” Ms Carver said.

“While Telstra is the largest broadband retailer in Australia, we have carefully examined the facts and circumstances of this acquisition as well as changes in the way consumers access entertainment. We have concluded that this acquisition is unlikely to result in a substantial lessening of competition,” Ms Carver said. Telstra has completed the acquisition of a 51.4 per cent controlling interest in Fetch TV following regulatory clearance. Fetch will continue to operate as a standalone business with Telstra as a majority shareholder.Telstra TV as a product will...

Massive news for Fetch and Telstra. Hopefully it won’t affect the other ISP’s that are currently using it such as Optus, Aussie BB, iiNet.

Doubt it. They pay for the service. Telstra will be happy to take that income.

It would be good to see CNN and History channel on Fetch.

Yes, but they are in an exclusive deal with Foxtel currently.

I was very surprised CNN made a deal where the only way you can watch it in Australia is to pay News Corp. A blow to Fetch customers for sure.

Hopefully it won’t affect the other ISP’s that are currently using it such as Optus, Aussie BB, iiNet.

Optus no longer supply Fetch, they stopped supporting it when Telstra announced they wanted to take a stake in it.

You can pay for your retail subscription through Optus, but you can’t purchase fetch through Optus any longer & if your Optus Fetch STB has a fault, if you’re lucky they might give you a used/returned STB, otherwise you’re Fetch from Optus is cancelled & if you still want it, you have to buy a retail box or go to another RSP who still provide it.

I guess the Optus Sports integration will probably disappear soon then? Maybe returning as an app if lucky but probably gone for good. Would be nice to have Kayo and Binge apps.

Who will they go with instead? I hadn’t heard this before.

Who will they go with instead? I hadn’t heard this before.

In my mind, it’s very possible that we could see a tie up between Optus and Foxtel at some point in the future.
-Telstra are drifting further and further away from Foxtel, between their Fetch TV deal and reported attempts to sell their 35% stake in Foxtel
-News Corp wouldn’t be too happy I imagine at Telstra having ‘a foot in both camps’ with Fetch
-Optus already operate the satellite infrastructure that Foxtel uses (and increasingly so now the cable network has closed) so this would be a logical extension of that relationship

The Optus Sports live channels and app on Foxtel just make sense to me too. Yes they compete, but Foxtel can have hands in both pies if they pay the retransmission fees.