Emergency is a gritty new medical observational documentary series with unprecedented access to one of Australia’s busiest hospital emergency departments.

In the spirit of the best medical dramas, the doctors and nurses of the Royal Melbourne Hospital emergency department are the real stars.

The series reveals the extraordinary compassion and incredible skills of the doctors and nurses as they treat more than 250 patients who come through the doors of the emergency department every day.

Emergency tells the stories of the patients through the eyes of the doctors and nurses who are literally saving lives every day.

Emergency will be produced by WTFN, creators of Nine’s hit series, Paramedics. 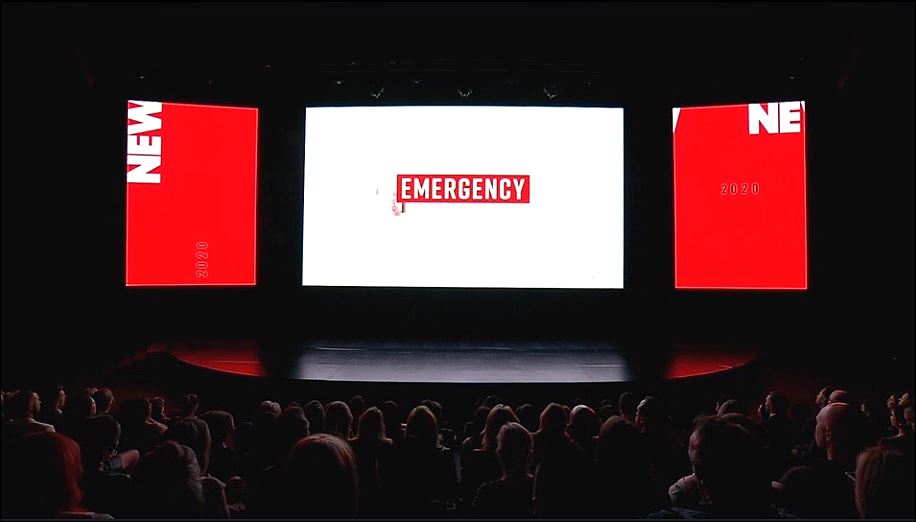 TBI reports the show has been acquired by Discovery UK for its channel Really. The series will consist of 10 hour-long episodes.

The series is set to premiere soon.

It looks like quite a good show, based on the promo - but 9’s voiceover and dramatic music is such a turn off.

It’s like they have a set and forget type promo department with little creative license to do anything different.

The factual series, filmed before the COVID-19 pandemic crippled hospitals around the world, lifts the curtain on the emergency department at The Royal Melbourne Hospital – the first public hospital established in Victoria.

Emergency will reveal the tribulations and triumphs of the Royal’s dedicated doctors and nurses as they deal with victims of vicious assaults, horror car crashes and other tragedies, caring for the constant stream of patients coming through the door every day.

This 10-part series offers incredible and unprecedented access behind the scenes, with roving and fixed cameras in trauma bays, examination rooms and triage. From the moment a patient is rushed into the hospital, each step of their dramatic journey is captured. As events unfold, personal interviews with doctors and nurses tell the gripping story of each compelling case.

These are the frontline heroes trying to save patients at their most vulnerable, suffering from critical injuries and life-threatening illness. They reveal the challenging procedures, vital decision making and emotional toll it all takes.

Patients and families open up about the harrowing and often heartbreaking circumstances that have brought them to the emergency department, where the care and compassion of highly skilled medicos can mean the difference between life and death.

From life-threatening conditions like strokes and heart attacks to victims of accidents, violence and major public emergencies, the series will reveal the bravery and extraordinary composure of The Royal Melbourne Hospital’s medical teams as they battle around the clock to save lives.

Nine’s Head of Content, Production and Development, Adrian Swift, said: “Emergency goes beyond the simple cases that arrive, sirens blaring, into ED at Royal Melbourne Hospital. It tells the stories of the doctors and the nurses, the lives they lead, their relationships and the amazing work they do saving lives. It’s confronting, heartwarming, tear jerking and amazing, all at once. It’s a world rarely truly seen and Nine is proud to bring it to Australian screens.”

WTFN’s Director of Content, Steve Oemcke, said: “We are thrilled to partner with Victoria’s most famous hospital on this compelling new series. Australia has fallen in love with the heroes of Paramedics, and we’re excited to now tell the story of the doctors and nurses at The Royal Melbourne.”

Emergency is produced by WTFN, the creators of Nine’s critically acclaimed series, Paramedics.

Nine’s decision to not directly replace Paramedics with Emergency in the timeslot seems odd. Has Nine planned something else for Tuesday 7.30pm (e.g. Australian Ninja Warrior)?

The factual series, filmed before the COVID-19 pandemic crippled hospitals around the world, lifts the curtain on the emergency department at The Royal Melbourne Hospital – the first public hospital established in Victoria.

Emergency will reveal the tribulations and triumphs of the Royal’s dedicated doctors and nurses as they deal with victims of vicious assaults, horror car crashes and other tragedies, caring for the constant stream of patients coming through the door every day.

This 10-part series offers incredible and unprecedented access behind the scenes, with roving and fixed cameras in trauma bays, examination rooms and triage. From the moment a patient is rushed into the hospital, each step of their dramatic journey is captured. As events unfold, personal interviews with doctors and nurses tell the gripping story of each compelling case.

These are the frontline heroes trying to save patients at their most vulnerable, suffering from critical injuries and life-threatening illness. They reveal the challenging procedures, vital decision making and emotional toll it all takes. 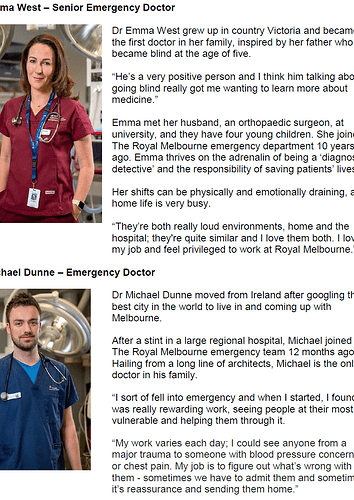 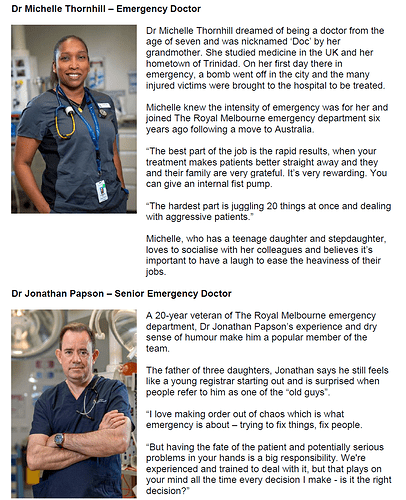 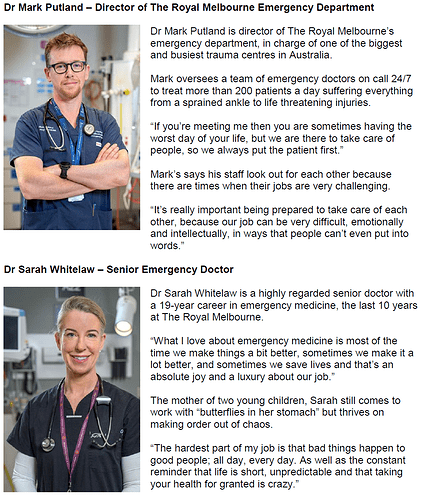 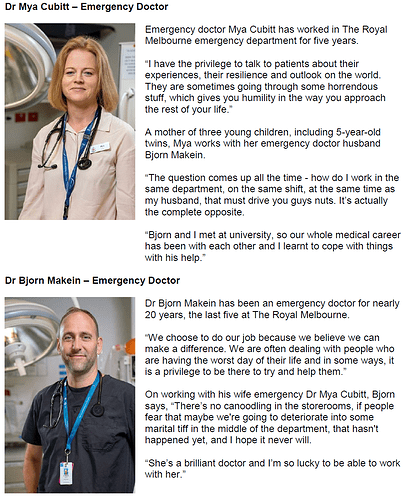 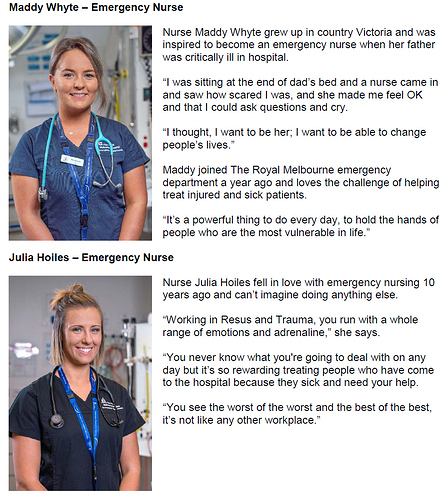 At Australia’s Royal Melbourne Hospital, Dr Emma West faces a dangerous situation with an aggressive stabbing victim. The patient will die without help, but he’s putting up a fight. Drs Jonathan Papson and Mya Cubitt race to save the life of a young man whose car slammed into a pole. Dr Mark Putland treats a factory worker who’s in shock after being confronted with his horrific life-changing injuries. A heavily pregnant young woman presents a challenge for Dr Michelle Thornhill.

A gunshot victim arrives at The Royal Melbourne Hospital under police guard. Dr Sarah Whitelaw fears the patient could die from his injuries, but the shooter is still at large, posing a risk. Dr Jonathan Papson treats a football player who could bleed to death from kidney damage, after an on-field collision. Dr Michael Dunne and nurse Lucy Stranger assess a pregnant car crash patient who can’t feel her baby move. Dr Michelle races to the waiting room after a woman mysteriously collapses.

Dr Fiona Nicholson uses her reassuring bedside manner on a young man with a racing heart and spiking blood pressure - but she’ll have to stop his heart beating in order to save him. A patient with a gruesome head wound has Dr Sarah Whitelaw on full alert, and unseen internal injuries could make things even worse. Nurse Julia Hoiles helps a smitten young couple who spend their first date in emergency. Dr Michael Dunne treats a nurse-to-be who has smashed her leg in a car accident.

A spate of road accidents puts pressure on the emergency team. Dr Mark Putland tries to help a car crash patient, but the man appears to be hiding something suspicious in his underpants. Dr Miriam Yassa examines a cheerful 82-year-old biker with fractures, who suddenly takes a turn for the worse. Dr Emma West’s road trauma victim could have internal bleeding, but the cure could do more harm than good. Nurse Yasna

Cardoza helps a patient who collapses after cutting his thumb on a coffee plunger.

Dr Mark Putland assembles a crack team to save a man with a gunshot wound to the neck with a rare procedure to keep him breathing. Dr Jonathan Papson suspects a surf-coach has a shattered leg from a horror car crash, which could spell the end of the young man’s career. A worker is in agony after a fall on the job, and Dr Sarah Whitelaw and nurse Maddy Whyte fear he has serious spinal injuries. Dr Mya Cubitt heals a former boxer with neat stitches and helps him confront an unpleasant truth.

Nurse Yasna Cardoza’s patient slipped in the shower and his wounds are very deep – but the thought of an operation terrifies him. A gunshot victim has Dr Michael Dunne on high alert, as he examines the man’s bullet-riddled body for injuries. Dr Emma West treats a mum who could lose her fingers after a high-speed car crash. Dr Mya’s patient is in agony after falling from a shipping container. Dr Michelle Thornhill stitches up a young man who walked into a wall while checking his phone.

Split-second events throw lives into chaos. Dr Jonathan Papson’s trauma patient wasn’t wearing a seatbelt when her car rolled, but she’s more worried about what her dad will say. Dr Sarah Whitelaw’s motorcyclist collided with a car and went head-first through a window, and there are grave fears for his brother who was also on the bike. Dr Mya Cubitt’s scared patient has an unstoppable nosebleed, and security crash-tackles a violent man trying to smear blood onto staff.

A severe asthmatic struggles to breathe, but Dr Bjorn Makein suspects another trigger. Air ambulance delivers a quad-bike rider who crashed at high speed, landing on his head, and Dr Michael Dunne fears there could be spinal injuries. Nurse Lucy Stranger’s detective skills and charm are needed for a patient with chest pains. A wayward spider sends a high-speed road crash victim to Dr Jana Alexander.

A life hangs in the balance, as Dr Emma West rushes to meet a critically injured road trauma victim at the helipad. Every moment counts, as the unconscious patient has severe blood loss. Dr Lauren Cohen treats an American schoolboy who plunged 10 metres down a cliff.

20-year-veteran Dr Tom Razga treats the ‘walking wounded’ in triage, reassuring a highly anxious woman who has a small wound. Is Dr Michelle Thornhill’s patient constipated from pasta or is it more serious?

A heavily pregnant young woman has collapsed at a train station platform, falling face-first and landing on her stomach. Dr Miriam Yassa is on high alert for the baby’s welfare, and the cause of the mum-to-be’s collapse. Dr Sarah Whitelaw treats a cyclist after a car hit him from behind. He’s can’t remember the accident or feel his feet. Support volunteer Jean is on hand for comfort and cups of tea and is a welcome distraction for stressed patients.

Is Emergency a replacement show for Paramedics? I hope not, I like Paramedics

No, the two shows complement each other. 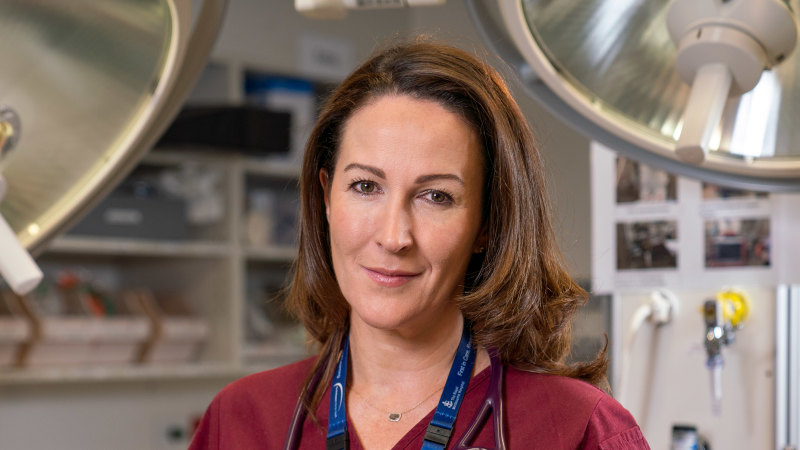 Am interested in this show. I have watched some episodes of both Paramedics and Ambulance Australia, which does touch up on various everyday emergencies and also covers the smaller check-ups to patients including the elderly and smaller accidents.

With Emergency, and being a ten-part series, i wonder if it can last a while? Just like what RPA did in the 1990s and 2000s? 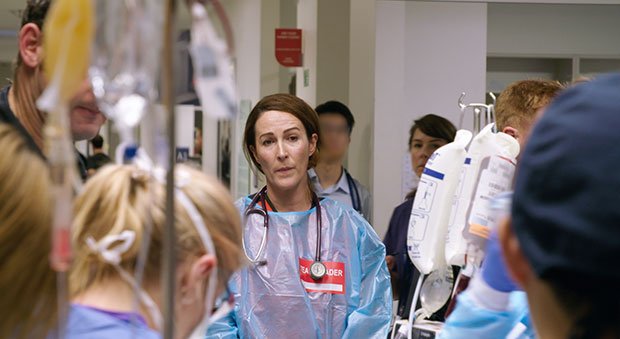 TV4 in Sweden and RTL in the Netherlands are among the international channels to have picked up Australian observational documentary Emergency.

Two observational series for Nine are back in production.