Hope it actually does something up here this time . It started off wet in October last year then November before no rain from early December to May . March was saved by 2 days , 1 with 80mm from a storm and the next day with about 20mm of showers.

Up here I mean Rockhampton/Yeppoon.

We’re still need 350mm to fall to get just average for the year.

Feels like the last ex cyclone up here was back in 2017 .

I really hope we don’t have those horrible heatwaves with high humidity, light winds like last year which affected Central and North Qld . Every day was sunny clear no clouds and humid and no rain for days on end. Some morning the humidity was so bad the feels like temp was 37 deg in the morning as the dew point was 27 deg too … crazy … We had dew points like that for 2 weeks … i guess it was more like Singapore .

All that humidity didn’t have any systems to tap into it.

Doesn’t sound very nice at all.
I don’t cope well with long periods of humidity either.

I have heard that this latest La Niña phase we are about to enter isn’t as strong as previous ones, so hopefully we won’t see as much rain here in NSW or extremities this time around,

Doesn’t sound very nice at all.
I don’t cope well with long periods of humidity either.

Unfortunately those long humid ruts are becoming all too common, even as far south as the NSW South Coast. Last summer there were a handful of days that were consistently muggy even in Bungendore and Canberra. Sustained dewpoints of 20C were basically unknown here up until about 10 years ago (they might have occurred briefly following a thunderstorm, say).

For me a dew point of over 22 degis where it starts to be unpleasant.

I mean now the dew point is 19 deg and it’s 23 deg but feels like temp is 23 deg. Supposed to be 27 deg today though we already have a light NE seabreeze.

It’s a nice time of year not too hot , too cold , too humid yet.

Yeah regarding that humidity it was so bad i got a heatrash on the crease of my arms and it was there on and off until May the next year … almost can use that as a way of telling how humid it is .

I used calomine lotion it would go away and keep coming back ! At one point in summer it was impossible to apply it as i was all sweaty.

Our ducted air con unit of 15 years broke too . Now we have new splits instead .

Air con techs were flat out up here and probably in North Qld too , was very unusual …

Normally you would get seabreezes in the afternoon or wind and clouds but we just had endless sunny clear days with humidity and barely any wind movement.

Usually Rockhampton being inland is known for barely any wind but the coast being so close to the sea and not much wind ??? I spoke to someone last year said it was the worst theyd experienced and had lived here 40 years.

Usually Rockhampton being inland is known for barely any wind but the coast being so close to the sea and not much wind ???

The strength of the seabreeze is a function of the differential between land temp and ocean temp; ocean temps in the Tasman and Coral Seas are usually well above average these days, meaning generally weaker seabreezes (and Southerly Busters). The hot SSTs also explain the record high dewpoints.

We even feel the effects of the Tasman Sea warmth here in summer: easterly changes are more humid and less brisk than they used to be (though still cool enough, at this altitude). Ocean temps are a lot cooler off Victoria and South Australia- and warming slower than the Tasman to boot- so places that get cooled directly by Bass Strait are still relatively pleasant in summer. Bungendore is just far enough south to get these pulses of Bass Strait air, though the effect is usually in the minimum temperatures only.

So in that case it won’t be extreme in humidity just yet? 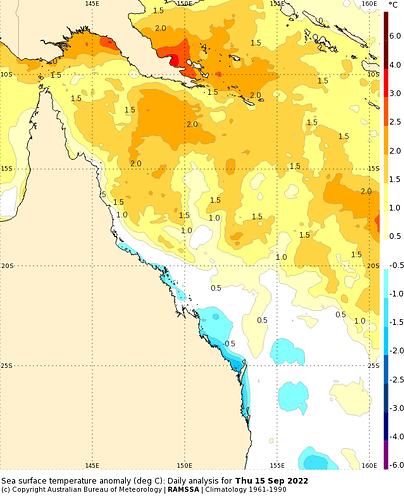 So looks like the extreme dew points then won’t be here just yet.

It was 30 deg today but the dew point was around 16-18 degrees for most of the day except the morning and that is pretty much average for this time of year. The BOM Meteye site does show it going up a bit Sat- Wednesday but down again after that .

You can still have a high dewpoint irrespective of the local SST, if the airmass is sourced from deep in the tropics. But consistently high SSTs make periods of wretched humidity more likely, as the standard summer day with a light seabreeze will contain more humidity than normal.

To override the effect of hot SSTs, there needs to be a strong push of temperate air from the south. But Yeppoon is much too far north for these (in summer). Port Stephens to Seal Rocks is about the limit of cooler temperate air in summer.

Yes in summer it doesn’t matter which way the wind is coming from SE NE etc it is warm… the only reason it feels “cool” is the actual movement of the air in the humidity more so than the coolness of it i think … if that makes sense. Sometimes just having clouds in summer makes all the difference too.

Sometimes a strong NE breeze (air would not be cooler ) but because it can be strong sometimes in Spring makes a massive difference . Bit like having a ceiling fan on 1 vs on 3 (maximum).

Thanks for explaining this , you make it easier to understand. Learnt something new .

I wonder if that is why people say Perth feels more humid in summer than it used to . Heard people say when I lived there that you use to be able to count the number of days of muggy weather in Perth on one hand , now people are installing splits because the evap cooling system which used to work don’t work as well.

Is it climate change that is making Australia have long periods of SST’s being high? Seems like the oceans have been warm for ever .

Is it climate change that is making Australia have long periods of SST’s being high?

But unfortunately the Tasman Sea is warming faster than just about every other water body on the planet. Off SE NSW and Tasmania it is fairly alarming. You don’t read much about it, but the temperate kelp forests that used to line the eastern Tasmanian coast are basically on life support due to this rapid ocean warming.*** The NSW South Coast (south of Ulladulla) has definitely got more humid in recent years.

***‘Really worth a crack’: bringing Tasmania’s giant kelp forests back from the brink | Australia news | The Guardian

Perth is a bit unique: the Leeuwin current brings warm water from the tropics in summer, unusual for an eastern boundary current. I think the strengthening of the Leeuwin current may be to blame for the rise in humidity in Perth. And the hotter airmasses that sustained easterlies bring also tend to raise dewpoints, when a light seabreeze develops against these easterlies. 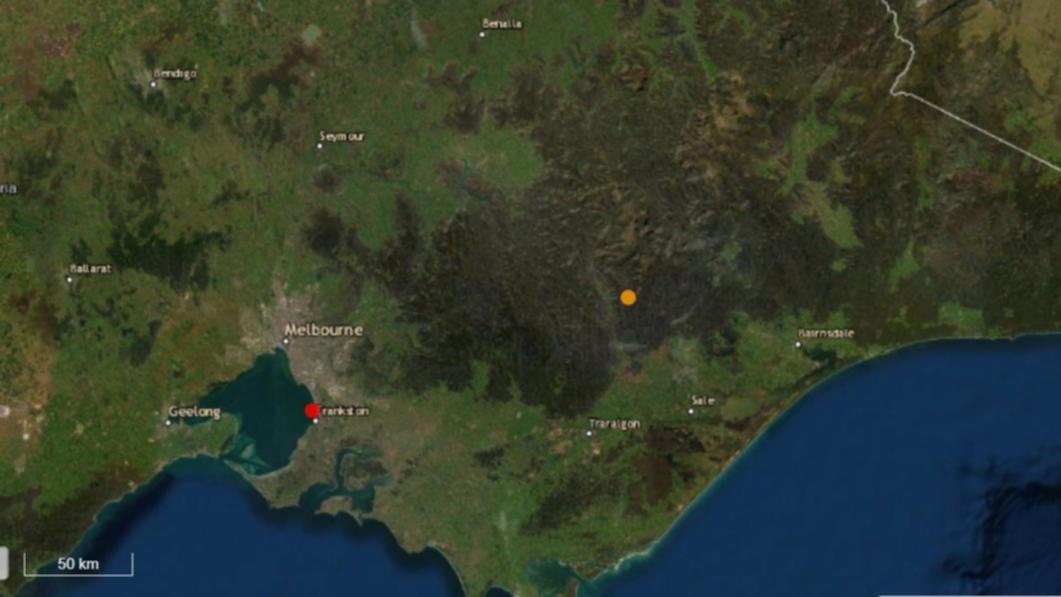 More than 100 people have reported feeling the tremors.

Geoscience Australia said it struck at a depth of 6km.

Almost 150 people reported to the government agency that they felt the tremor.

The Victorian SES said no damage was reported and there was no tsunami threat. 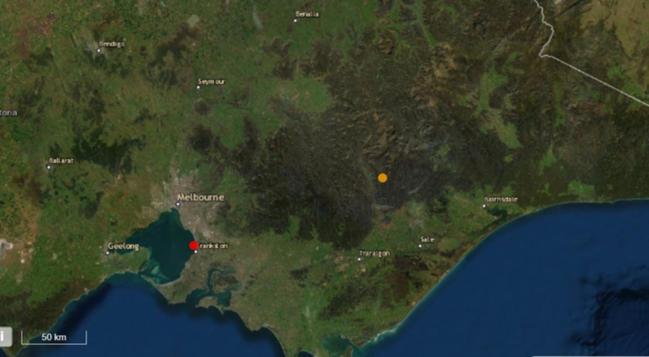 The alert level has been raised at a supervolcano in New Zealand, raising fears of an eruption.

When Taupo last blew in around the year 232 AD, it was the biggest eruption on earth in the last 5,000 years.

An even bigger supereruption 26,000 years ago completely transformed swathes of the North Island and is the most powerful eruption to rock our planet in the last 70,000 years.

And experts have now suggested that the volcano could be in for another - potentially historic - eruption.

It’s looking like a much cooler October so far this year than last . It was 28 deg or higher for 2 weeks of the month last year here and rainfall was below average . Weather was dominated by more northerly winds . The charts were very troughy with storms kicking off in SE Qld. We kept missing out so was about 8mm below average .

Rockhampton averaged 3 deg above average for max temps last October and Yeppoon 1.8 . It was a big change coming out of winter.

Last October the temperature did not drop below 25 deg at all .

By mid October the humidity , clear skies and intense sun was so bad we had the air con on which is unusual for here (2021 it was December ) . It was the start of hell with lots of clear skies (very few clouds for months on end) , high humidity , light winds for weeks on end … we had a wet November and half of December then it was dry until May this year with just random storms breaking the pattern.