@metoffice
🌡️ A temperature of 39.1°C has provisionally been recorded at Charlwood, Surrey If confirmed this will be the highest temperature ever recorded in the UK⚠️ Temperatures are likely to rise further through today 📈 #heatwave #heatwave2022 https://t.co/aC2YPg3Q2G
NewsWeary July 19, 2022, 11:54am #2004

The poor Brits just aren’t equiped to deal with that heat. I was watching some British breakfast news this afternoon and had a chuckle about commuters on the trains complaining about the heat in carriages. Having endured long hot summers commuting on non air-conditioned Sydney trains and arriving at work drenched in my own sweat, i didn’t have a lot of sympathy.

It’s funny, my parents are over there at the moment with the hottest temps ever there but we’re here and getting minus 2 and 3 degrees in the morning which is actually quite cool for us.

I know Australians are laughing and telling them to suck it up but it’s like here in North West Tassie facing temps of 40 degrees. It doesn’t happen and it would be a huge shock if it did. Hobart and other places in Tas have done it and they only do it for a day but this is several days of a severe heatwave. Our houses aren’t designed for that and neither are theirs - we still get laughed at by the mainlanders for calling the air con a heat pump, but I can tell you they are used a heck of a lot more for heating than cooling in a year!

Bungendore gets below -5 and also occasionally above 40; it’s a pretty extreme climate by Australian standards in terms of temperature variance (not, however, in terms of actual weather: the majority of days are fine and mostly sunny).

Heating and cooling are both required, but the former much more than the latter as average temperatures in January are still reasonable at around 20C, similar to Melbourne in summer.

It’s no Winnipeg though: apparently they had a dewpoint of 27C yesterday, and can also get temps in the 40s. This is a place that regularly sees -30 and below in winter! A dewpoint of 27 is above average during the height of the wet season in Darwin.

@metoffice
🌡️ For the first time ever, 40 Celsius has provisionally been exceeded in the UK London Heathrow reported a temperature of 40.2°C at 12:50 today 📈 Temperatures are still climbing in many places, so remember to stay #WeatherAware ⚠️ #heatwave #heatwave2022 https://t.co/GLxcR6gjZX

@metoffice
Here are the highest temperatures across the country today 👇 At least 34 sites have exceeded the UK's previous national record of 38.7°C 🌡️ #heatwave2022 #heatwave https://t.co/QwwfzLWZpc 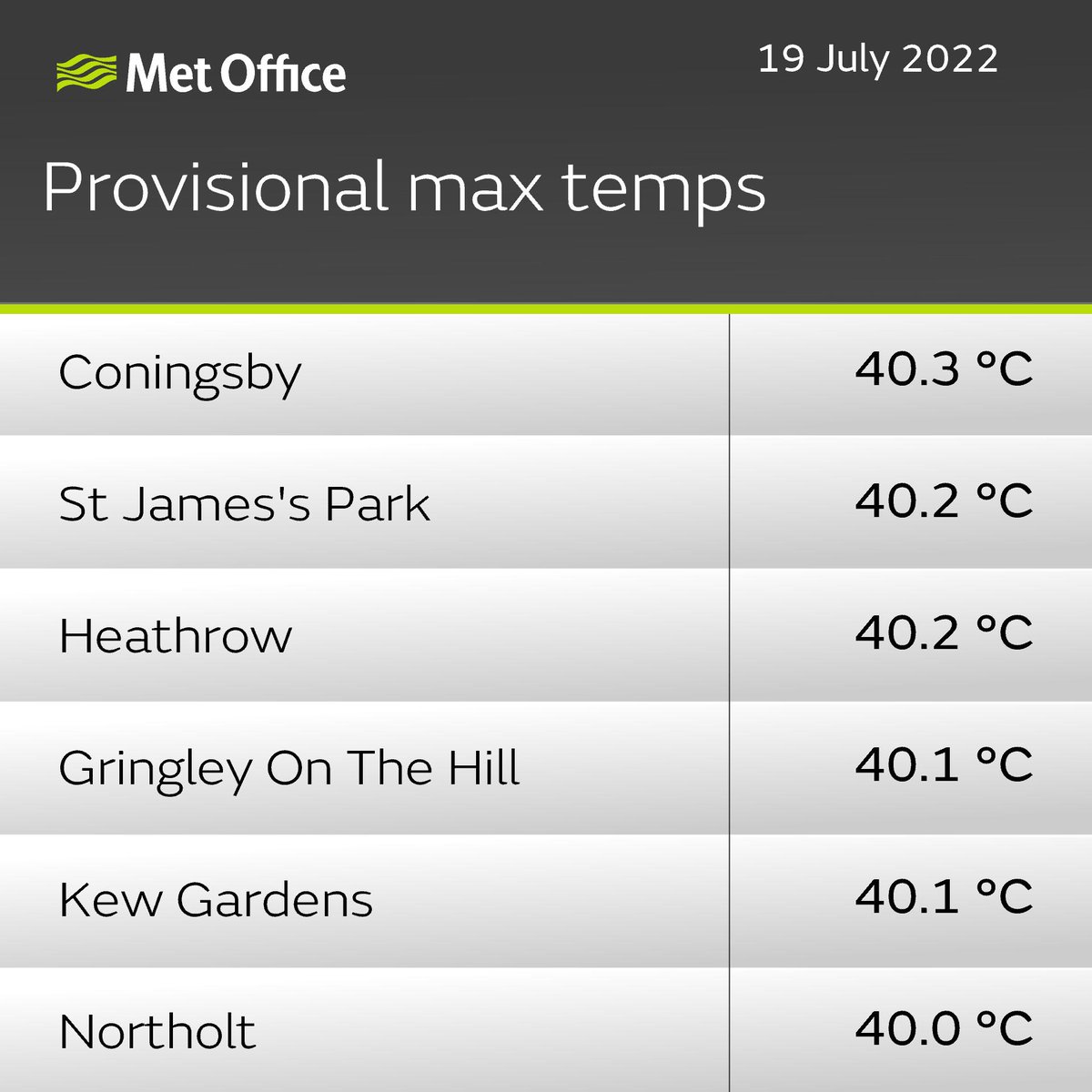 It was the coldest morning in Melbourne in three years today. In Glen Waverley it was around 0C. In the CBD the temperature dropped to 0.9C at 7am.

you thought that cold, try living in Ballarat, where it was -1 or more at 7am

The highs this winter have been way further south than usual causing very cold mornings in VIC and TAS, places that are usually affected by too much cloud and wind. By contrast, after a few frosts up here, we’re expecting very mild nights for the balance of the week courtesy of wind, cloud and humid air from the Tasman Sea in E-SE winds.

I am gobsmacked at just how many stations reached 40 in the UK. I was expecting maybe one or two. The latest State of the Environment report paints a "grim" picture for Western Australia, according to scientists, with mammal extinctions, bushfires and water availability highlighted as key areas of concern.

Highs have been further south but at times I have seen them over land. I wonder if that is why it has been so wet in our dry season here in Central Qld and so dry in Perth’s wet season.

There was a good burst of proper westerlies in June, which resulted in an excellent start to the snow season, but that’s dried up almost entirely now. We have a persistent positive phase of the Southern Annular Mode, causing cold fronts to contract towards Antarctica and high pressure further south, and mild easterlies right down the east coast. Basically, in a positive SAM the weather systems move further south; the reverse is true in a negative SAM.

A strong negative SAM in spring 2019 was one of the culprits behind the severe bushfires that year. Strong and dry westerly winds blew as far north as SE Queensland. Between extreme heat days there were actually some very cool days in Bungendore that spring, notably 13-14 one day in early December- though it was dry everywhere.

Positive SAM phases are becoming the norm, hence the long term drying trend in what I call the ‘SAM regions’, SW WA being the most obvious. As the decades roll on I expect other SAM regions further south (such as around Mount Gambier) to undergo more drying. And places that benefit from easterly rain such as the Southern Highlands of NSW will become wetter in winter.

Having endured long hot summers commuting on non air-conditioned Sydney trains and arriving at work drenched in my own sweat, i didn’t have a lot of sympathy.

Are Sydney trains all air-conditioned now? That would have been a while ago I’m guessing.

The past tense was used (‘endured’). But going home on a 40C day in an S-set (‘tin can’) sans A/C is an experience that is not quickly forgotten. Particularly if one has to wear a school uniform. And yes, even in the morning they could be uncomfortable during the interminable humid rut Sydney finds itself in during late Jan to early March.

I recall that being one of the hypotheses I learnt about back in my (brief) studies of atmospheric science at uni - that climate change would shift the prevailing weather patterns further towards the poles as the planet warmed, meaning areas such as mid-latitudes that relied on frontal systems delivering their rain would start to suffer from drought as a result. This was in the mid-2000s though, right after the nasty 2006 drought year (part of the multi-year millennium drought), and I presume there has been a bit more evidence to base things on since?

170mm this month in Yeppoon and the average is 43mm

Our wet season was dry and our dry season is wet.

Still 105mm below average year to date but as long as we keep getting above average rain this should reduce.

Most of Australia has actually had a pretty cold July…except for eastern NSW, which is feeling the effects of all that mild easterly air. Locally we are in for a pretty warm finish to the month, so July could be about 1.5C warmer than June in Bungendore on a 24 hour mean temp basis which is quite significant. 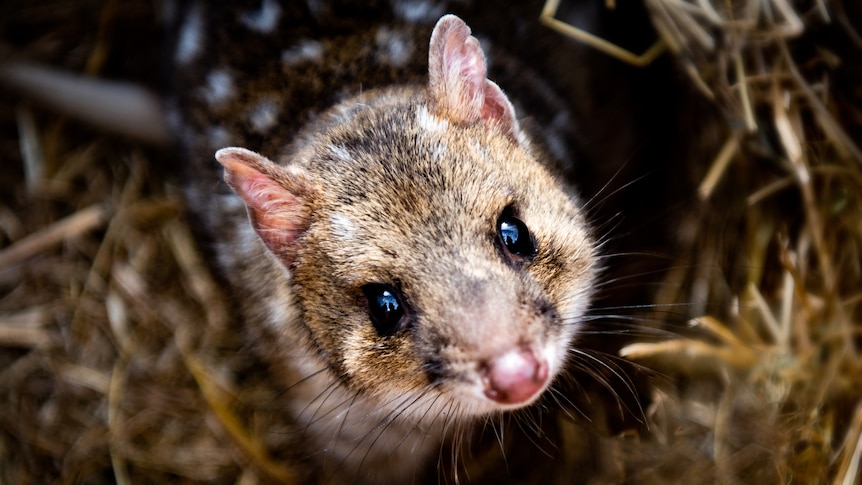 Scientists hope cat-like predators once thought to be extinct in mainland Australia will make a big difference to the health of their new habitat in western Victoria.

Brutally cold this morning across the Southern Tablelands.

Yep! Had -6°C on the thermometer at my part of Canberra at 7:30am this morning, freezing!
I had a look online this morning and found an unofficial weather station online near Cooma which got down to -11.1°C as well. A petrochemicals expert has warned of potential health risks in developing an industrial precinct in Darwin Harbour, but the government believes risks can be mitigated.