With ratings falling below 200,000 twice in the last quarter, Channel 9’s breakfast show, Today, is in a desperate need for changes. This thread can be a sound board with what you think needs to be done to help restore the show.

@JBar, you asked for it…

COMPLETE OVERHAUL. (Remove most if not all producers, on air talent with exception of some crew/wardrobe who can hardly be blamed for anything). Also the director of News&CA should be given his final warning about improvements. Legitimate thoughts.

I know it won’t happen, but I’d love to see Agro’s Cartoon Connection back on. telly

Karl said he wore the same suit for a year. Did wardrobe notice?

Well, yes. It would be an improvement on constantly saying they need to do something about one news program or another.

I know you just crave my opinion so here it is:

With Sunrise experiencing a 16,000 viewer increase last week on the week prior, the suggestion (usually found in the Ten News thread) of a straight-forward, fast-paced news bulletin at breakfast will not work, particularly when the 6pm News is starting to litter its bulletins with lighter stories. The people who oppose breakfast television don’t understand its unique genre; a mix of the latest and overnight news combined with feel-good stories to kick-start your day. A breakfast show should be like" a well-informed neighbour coming over to chat to you in the morning" [Morning Glory, 2010]. You will be aware that if you wake up on ‘the wrong side of the bed’, this negativity shadows your day.

One thing Sunrise does it entertainment every hour. Personally, I don’t think that is appropriate but if the ratings suggest otherwise, maybe implement them.

I would also suggest moving the segments around ie. Today goes live when Sunrise is on a commercial break, move sport to 6.20 (not directly against Sunrise’s).

If anything Extra has struggled more since the extra half hour was added in 2015. Bring back Morning News Hour… more entertaining then the crap that is the last half hour which is not even 15 minutes of content half of it is in-program commercials.

Maybe Ten should take the opportunity of Today’s shortcomings to launch a breakfast bulletin, then Nine might put on their thinking caps and figure out how they can salvage the show before it sinks any lower.

Guests:
Today need to refresh their resident experts and commentators. Robyn Bailey (and maybe Sarrah Le Marquand) is the only left-wing regular to appear on What’s Making News for example. This should not be the way in a world that is lacking these voices, drowned out by conservatives.

As for celebrities, Today severely lacks in this department. There are either no A-lists celebrities (like Tom Cruise, Katy Perry) in live or per-recorded interviews, unlike Sunrise. If you’re lucky you get recycled guests (Curtis Stone for example); dated stars who appeared on the show just weeks prior. Is it Today’s tighter cheque-book, negative/limited contacts or their excluded location?

Location:
Moving to Melbourne has been suggested, yet is not that feasible. At the moment they are in a cave, certainly not ideal for breakfast, so get out of there. At the very least, they could knock down the walls and have an open, glass studio- like they did between 2003-2008. Or even, rent a harbour-side apartment, as an interim measure before their 2020 move; if it makes it better sponsor it like the Summer in the City.

Axing Today will seriously weaken the news division if you don’t do breakfast television. Axe Today and create a new show? Why would you do that, not just refresh, for an established brand with more than 35 years of viewer rapport (more than a decade as number 1). It is far more risky to do what your suggesting.

This is what I mentioned a while ago too. It could be a massive advantage to a Ten to give it another try now.

Personally, I think the longterm goal for Today and Sunrise for that matter needs to be local versions of the show for each of the five capital cities to compliment the popular local breakfast shows people are listening to on the radio once they turn off the TV and head into the car/public transport for another weekday’s journey to work, school, uni or whatever the case may be. National evening (except SBS, but that’s a different market to the other four networks) and even afternoon news bulletins do not work on Australian TV and personally, I’d argue that national breakfast TV shows have never really been the best fit for a country which has intensely parochial local markets where people really like see their state, city and to some extent even their local area represented on TV!

But in the more immediate future I reckon Today needs to change the format of how the news updates are presented each half hour, perhaps incorporating a 2-3 minute local window at the end of the half hourly national news updates? For the capital cities, these could probably be produced relatively inexpensively by having a reporter in the newsroom doing a brief 2 minute or summary (I guess formatted similarly to the news updates you’d hear on radio, but obviously with the inclusion of some footage) of the local news, 30 seconds to tell us the weather right now/expected today and a 30 second traffic update.

Along with live/local updates for Sydney, Melbourne, Brisbane South East Queensland, Adelaide and Perth I’d also like to see local news updates produced for at least the major aggregated markets of Regional QLD, Northern NSW, Southern NSW/ACT and Victoria but TBH I’m not sure how updates for those areas would work without the content being pre-recorded and possibly including 12 hours+ old news which obviously wouldn’t be ideal.

Replace with pornography. Or the test pattern.

Wouldn’t think so as they didn’t have an issue moving the set around in 2016… only started when Today Extra moved in and started doing the show in studio 23 in 2017. Then they couldn’t be bothered moving the set constantly 3/4 times a day.

Move it to Melbourne with new hosts. Cut a deal with their new in house paper, Fairfax, to run exclusive content from their papers using their reporters and commentators. 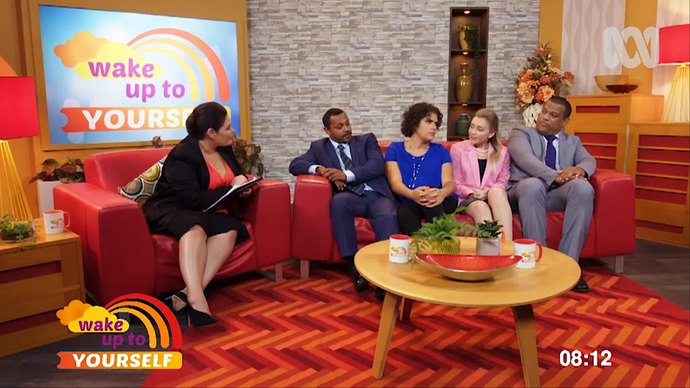 Rebecca Maddern? With her long Sunrise history could be smart if it happened, certainly familiar across Sydney and Brisbane somewhat now too following Ninja.

Get Joh Griggs, incorporate her into the tennis coverage and build a new lifestyle show around here. She has the warmth that Lisa has whereas I think Georgie comes off cold for that time of morning.

But she’d surely be on a lucrative long term contract though, with BH&G and her long history with the network, including sport (has indicated she’s already lined up for Tokyo 2020). Also in numerous articles over the years has said how happy she is at Seven and more interestingly how “it was a no brainer, I chose Seven and never looked back” (or along those lines) quote for when she was approached by all networks back in the early 90s after retiring.