Here’s a video of a studio feed from one of those late-night call and win programmes with the presenter talking about how she has snot in her nose and how she’s only doing the programme because she’s poor:

It looks like they do these type of shows for all over the globe from the same facility because the same feed carries call and win type programmes (as well as home shopping) from all around the world (various European languages, Latin American, etc.)

Here’s another clip from the same studio feed, but for a program for Slovakia:

Yes, that facility is in Budapest and is constantly beaming localised versions of Call & Win all over the globe.

LOL, this show is still going?!

Anyway, they’re a couple of years old now but here’s a few top quotes from Media Spy about Call & Win!

It was a truly interactive experience, in that they interactively managed to rob me of about $200 when a mate thought it would be fun to redial the 1900 number a few hundred times to guess a fucking matchstick puzzle.

The match sticks were my favourite puzzle, I hate the envelope ones as they’re always really obscure answers.

There were a few occasions where I’d think I know the answer, but couldn’t bring myself to actually call and admit on TV that I was watching the show!

I actually had some of the answers some of the time and wanted to ring up. But after some googling, I discovered it is so hard to actually be accepted. You need to answer some quiz questions on the phone, or something like that.

I’d be interested to hear if anyone on MS actually watches or enjoys this? Came across it last year overnight, how naive to think my phone call would ever get through.

A few snapshots from this morning’s edition on 9Gem: 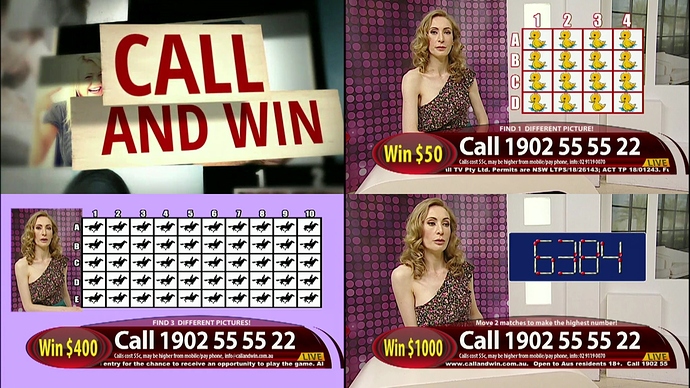 As an additional bonus, the thoughts I had after seeing a little bit of it:

“Can’t believe it’s still going”
“What a waste of 9Gem HD - very poor picture quality even by SD standards!”
“I’d actually prefer infomercials”
“Even Midnight Zoo, Quizmania, The Mint & The Uplate Game Show with Hotdogs were all better than this…and that’s really saying something!”
“Who is this presenter? Almost looks like a younger Natasha Beyersdorf who’s hit hard times!”
“It’s a shame Gogglebox currently isn’t on the air, because I’m sure they’d do a brilliant job tearing Call & Win apart!”
“Surely Call & Win is exactly the type of program that A Current Affair would do a ‘TV Competition Scandal’ report on if it wasn’t airing on their own network?!”

No doubt there are others who could think of more to say, but that’s all I’ve got for now.

You watched it long enough to see three different games. I’m impressed with your staying power.

I didn’t actually watch that long, just went through a recording to get caps of three different games!

I wonder if the reason they don’t air in some states is because they can’t get a permit? Says a lot about its legality if so.

I didn’t actually watch that long, just went through a recording to get caps of three different games!

The things people will endure for capping purposes is something we should all appreciate and admire!

Love the disclaimer scrolling past on that third cap.

“For a chance to receive an opportunity to play the game.”

This show is so bad. Nothing redeeming at all.

The only interesting thing to happen was somebody flicked a switch for a few seconds and we got what looked like a shopping channel in some weird language with much better PQ.

Can’t expect much from the Eastern European presenters, they’re probably only paid a few dollars an hour.