Back in Time for Dinner

Back in Time for Dinner 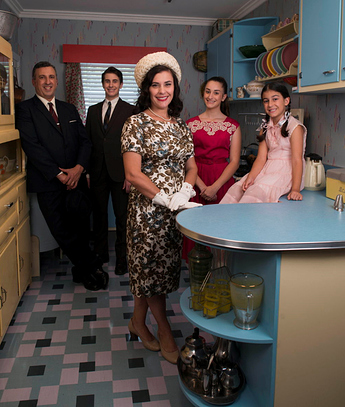 From Tuesday 29 May at 8.30pm on ABC & ABC iview, guided by Annabel Crabb, one Australian family goes on an extraordinary time-travelling adventure to discover how the post-World War II revolution in the food we eat has transformed the way we live, the fabric of the nation and defined the roles of men and women over the past 60 years.

We’ve all heard it at some stage, or even said it … “back in my day things were better…” or “you don’t know how lucky you’ve got it these days…” So, what if you could find out if those statements from your parents or grandparents were true? What if you and your family could go back into the past and ‘live’ those bygone days? Well, that’s exactly what the Ferrone family has agreed to do.

In each of the series’ seven episodes, this food-loving Australian family of five is throwing away their culinary comforts and kitchen appliances, smartphones and snapchat, and turning their back on its 21st Century lifestyle. The Ferrones are embarking on an extraordinary time-travelling adventure from 1950 to the future, to discover how the way we shopped, cooked, and ate has shaped our modern-day lives.

In 60 years, Australians have gone from food being influenced by our British heritage to having the world on our dinner plate. Along the way we’ve been introduced to dehydrated, frozen, microwaved, pre-packaged, and takeaway meals. And, our recipes have gone from being handed down through our mothers to, simply, being downloaded.

But how has this change in what we have eaten, along with innovations in the kitchen, transformed us as a nation? To find out, the Ferrone family home has been turned into a time machine and each week, the family and their home is transported to a different decade, as they take on the dietary habits, lifestyle, cooking fads and fashion of that era.

As Annabel Crabb guides the Ferrones, an everyday Australian family, through the different decades, Back in Time for Dinner offers a unique opportunity to tap into the social, economic, and political imperatives of our times. The family’s own home is meticulously transformed back in time from the 50s all the way to present day and finally into the future. Following carefully researched recipes they’ll source, cook, and eat the same meals as everyday Australian families in each era. The family will live through the highs, lows and challenges that shaped family life in the 20th Century.

With the visually compelling transformation of the house, the soundtrack of the decades, and extraordinary ABC archival material, Back in Time for Dinner is rich with the pleasure of recollection and nostalgia as well as the jaw dropping disbelief at how quite alien the world was not so long ago! 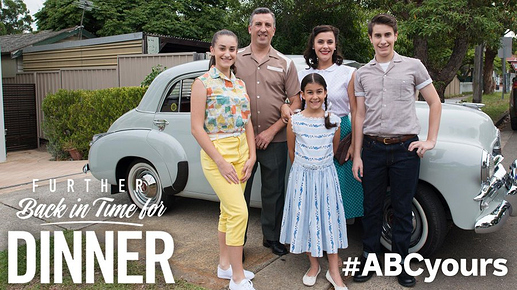 The Ferrone family are back in 2020 to go on another time travelling adventure in Further Back In Time For Dinner. Further Back In Time for Dinner looking for Aussie memories

Annabel Crabb series needs stories, mementos, photographs, films or recipes from the 1900’s to the 1940’s.

Further Back In Time for Dinner

From Tuesday 1 September at 8.30pm

What happens when you take an ordinary 2020 family back in time 120 years to immerse themselves in five decades of Australian history? Over five episodes, join Annabel Crabb as she guides the Ferrone family back through history as they cook, eat, and live, from Australia’s Federation to the 1940s. ABC’s Tuesday nights continue to be the home of must-see factual entertainment, when Further Back In Time for Dinner , airs from Tuesday 1 September at 8.30pm.

In 2018, Australia fell in love with the brave Ferrone family, who’ve returned to take on the time-travelling challenge once again. Peter, Carol, Julian, Sienna and Olivia, have already discovered the trials and joys of living through 60 years of Australian history from the 1950s right through to the present day and beyond in the hit series Back in Time For Dinner .

Now, this average family of five, who are all comfortably accustomed to the perks of a very modern world, are back and have to source, cook and eat their way ‘further back in time’ – through a plague, a pandemic, two World Wars and the Great Depression. The Ferrones will encounter many parallels in history that we are currently experiencing in 2020.

Along the way, the family will also meet remarkable people who have fascinating tales of the times or have played a part in our food revolution. Among the surprise guests at the dinner table are beloved cook Maggie Beer, former Foreign Minister Julie Bishop, our favourite green thumb Costa Georgiadis, historian and author Dr Clare Wright and comedian Steph Tisdell.

With the visually compelling transformation of a house built in the 1900s, and extraordinary archival material, Further Back in Time for Dinner is rich with the pleasure of discovery as well as the gob-smacking disbelief at how we lived our lives as a fledgling nation. Further Back In Time For Dinner helps us understand our world today by looking into the past. 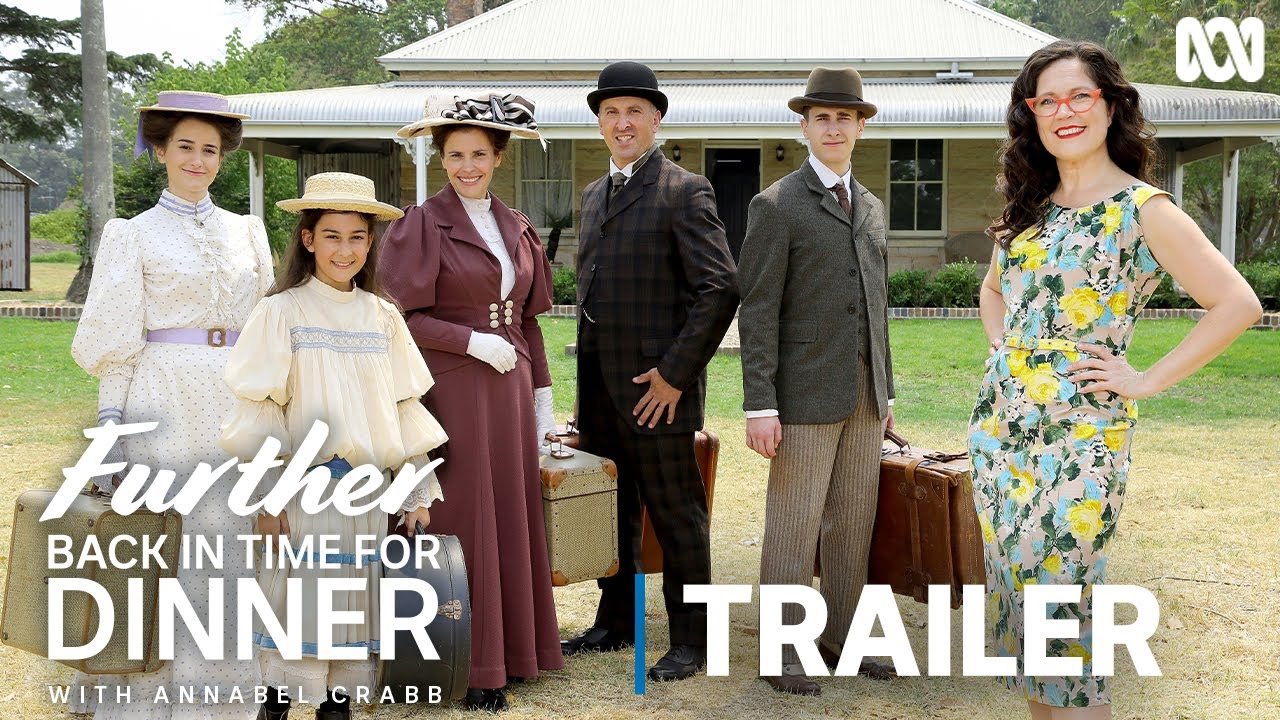 I can’t wait to watch this

Wow can’t believe it was 2018 it was last on , also looking forward to it. 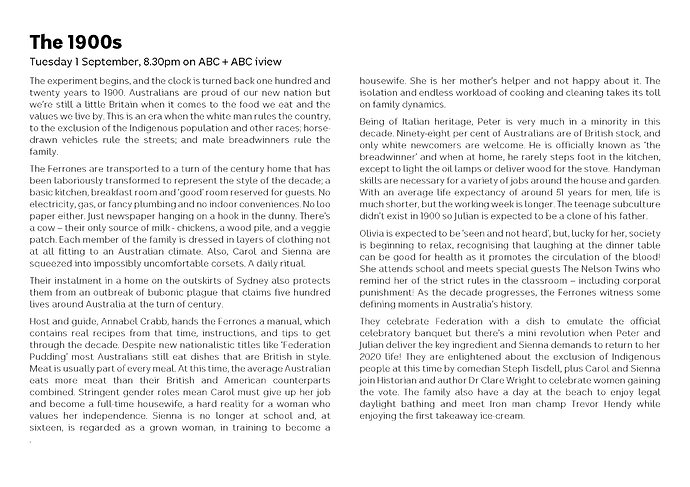 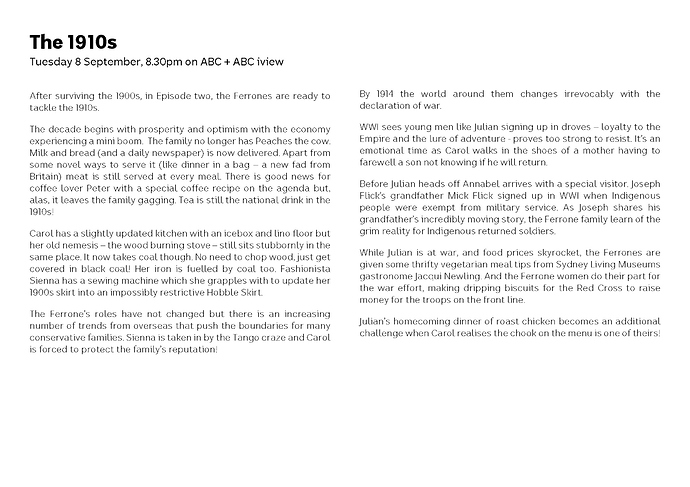 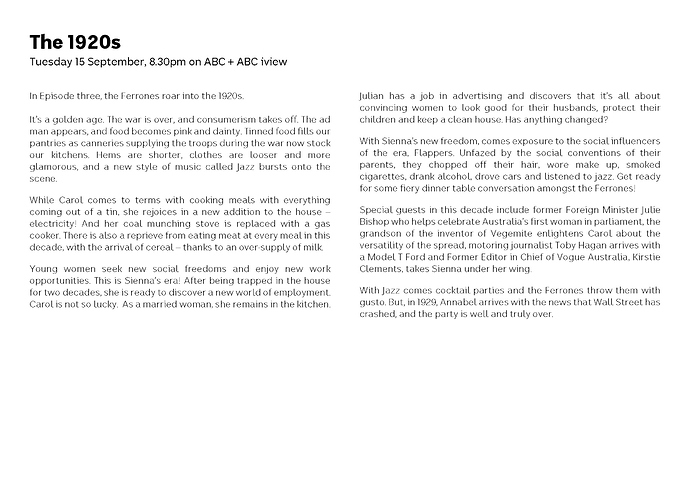 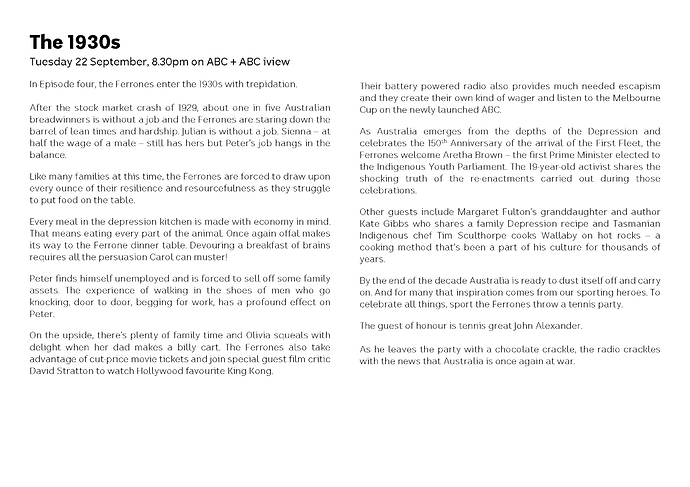 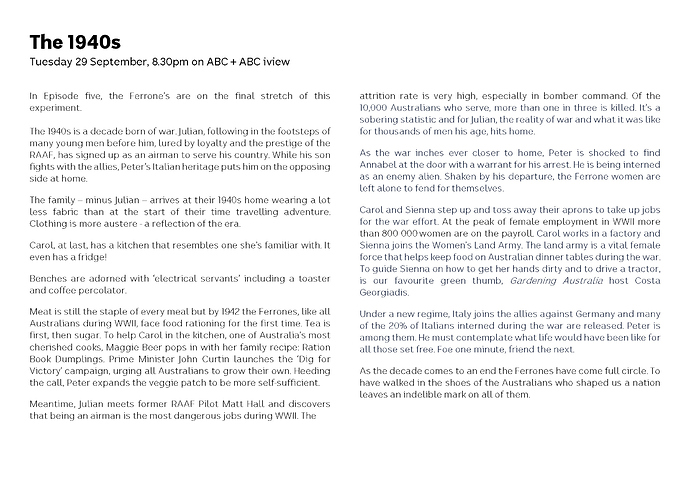 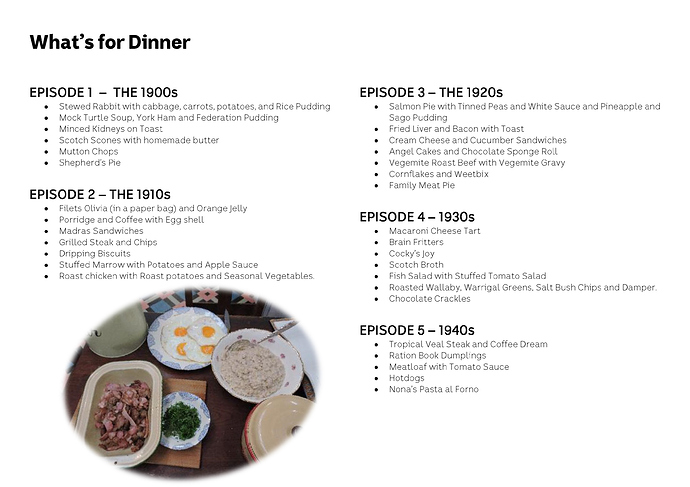 Just announced: TV host @annabelcrabb & Further Back in Time for Dinner's Carol Ferrone joins gastronomer Jacqui Newling at Vaucluse House on 14 Oct for a special event talking all things 1910s plus cooking up a recipe from the SLM collection. More: slm.is/backintimeford… https://t.co/DBy3AjlVVq 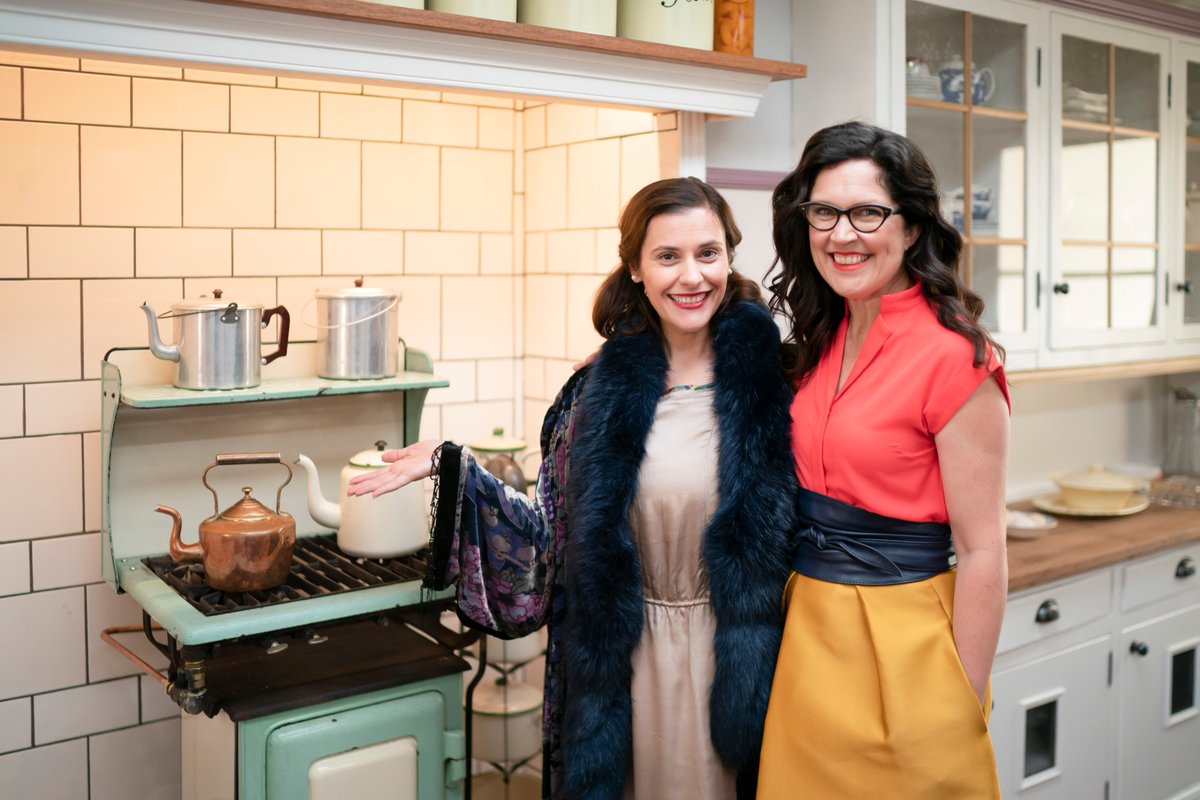 Carol Ferrone has been posting behind the scenes photos on her Instagram during the show’s run. I loved the show Further back in time for dinner. Is there anywhere that I can find the recipe from the show? Would love to make the coffee dream and a few others.
Well done to cast and crew.

I’ve been looking for that, too. Watched the final episode last night and was salivating over Nonna’s Pasta al Forno dish. Have already googled recipes for it. Can’t find anything resembling that Coffee Dream dessert.

Such a great series and a lovely family. My grandparents used to talk about life in the first half of the 20th century but the Ferrones really brought it to life. I wasn’t fully aware of how migrants and the indigenous were discriminated against. The indigenous men who came back after fighting for the country being refused admission to the RSL was confronting.

EDIT: I had a look at the episode again and the Coffee Dream seemed to have the consistency of a dessert my grandmother used to make called junket. Googled Coffee junket and came up with a few recipes. This was one:

2022 iteration from the Upfronts

BACK IN TIME FOR THE CORNER SHOP 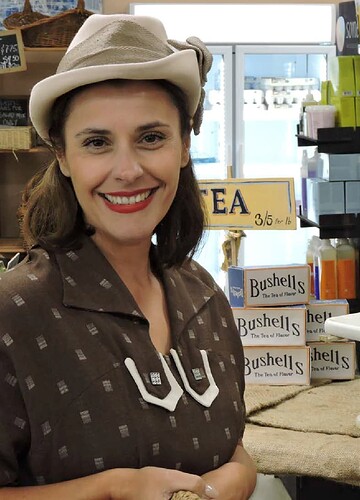 Hosted by Annabel Crabb this much-loved living-history series returns. This time with a twist, rewinding the beloved Ferrone family back in time to live through over 100 years of running a family-owned corner shop.

An institution for millions of Australians the humble corner shop was more than just a place to buy essential daily needs and tasty treats it was once at the heart of our community.

From meat pies to milkshakes, from salami to dim sims, from fads to frozen foods, this series will go beyond the family home into our neighbourhoods to tell the story of a changing Australia. 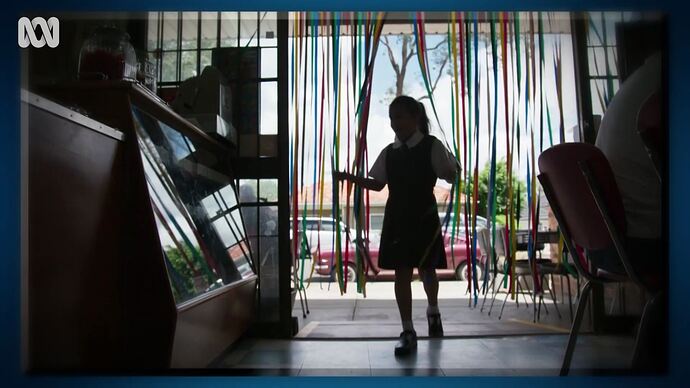 Annabel Crabb and the Ferrone family return to the ABC, to take us on a journey back in time to experience one of Australia’s most treasured institutions – the humble corner shop.

After an exhaustive search to find the perfect corner shop for the Ferrones to inhabit, filming began in Sydney today on Back In Time For The Corner Shop.

In the latest installment of this much-loved living-history series, the Ferrones will experience close to 150 years of running a family-owned corner shop. From meat pies to milkshakes, from salami to dim sims, from fads to frozen foods, this series will go beyond the family home into our neighbourhoods to tell the story of a changing Australia.

Jennifer Collins, ABC Head of Factual and Culture, said; “We are thrilled to be able to see the Ferrones heading back in time again, this time running an Aussie institution – the corner shop. This format is such a wonderful way to explore Australian history in a way that is engaging, immersive and family friendly. The series starts in the 1850s and ends in the 1990s, which is a lot of time travel for one family!”

Warner Bros. International, Head of Entertainment, Caroline Swift said; “Who doesn’t have great memories of their local corner shop. With friendly store owners, groceries ‘on tick,’ kids carefully picking their lollies and gossip a plenty, the Corner Shop was once an integral daily part of Australian communities. Back in time for The Corner Shop leaves no stone unturned with the Ferrone’s tackling the evolution from the mid 1800’s through to the last-minute convenience of the 21st Century.”

Produced by Warner Bros International for the ABC, Back in Time for the Corner Shop will be the third time Annabel Crabb and the fearless Ferrones have taken Australian audiences on a historical journey. If you’d like to ‘go back in time’ again, log in to stream on ABC iview to watch Back In Time For Dinner and Further Back In Time For Dinner.