SBS has got a Special at 10AM despite ABC News saying that the results come out at 11:30AM 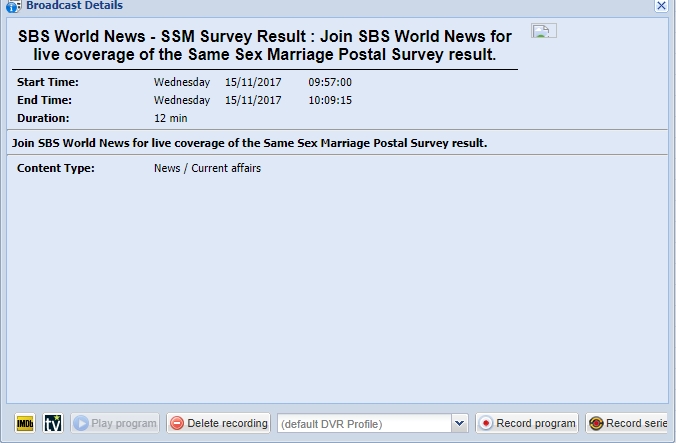 The ABC press release I’ve received says 10am (AEDST) and their coverage starts 9.45am

At 9.45am (AEDT) join ABC NEWS National Affairs Correspondent Greg Jennett and Political Editor Andrew Probyn from Parliament House in Canberra for full analysis and all the political reaction from the key figures from both sides of the debate.

9AM here on news.com.au

I guess, records will start at 8 then.

Seven News to have coverage from 10am

Nine News has coverage from 9:57am. 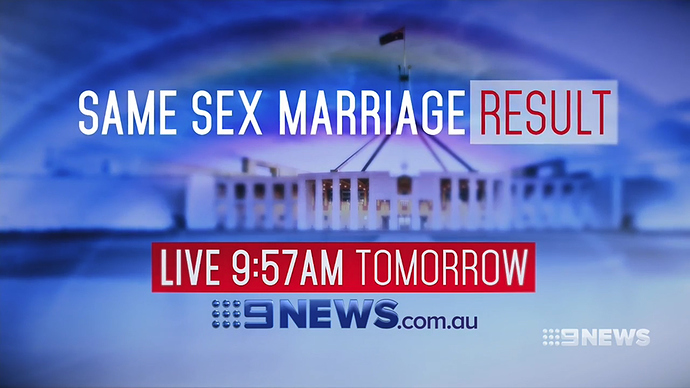 Nathan Nat & Shaun at Perth’s Nova 93.7 will be live from The Court from 6am AWST according to Facebook. Should be interesting breakfast radio fodder given that results will be released at 7am local time.

After a story on the vote on Seven Afternoon News in Perth, they mentioned that Matt Tinney will host coverage during Sunrise, so it seems Seven may be doing local coverage in Perth for a short bit and then returning to the national program? At least that’s how I read that.

Will be interesting to see how Nine manage this around Today/Today Extra in non-AEDT states.

9 News Regional QLD had a mention of the coverage in the bulletin which said “Live 8:57am QLD / 8:27am NT” on the screen.

Also on the radio front, from JOY in Melbourne. 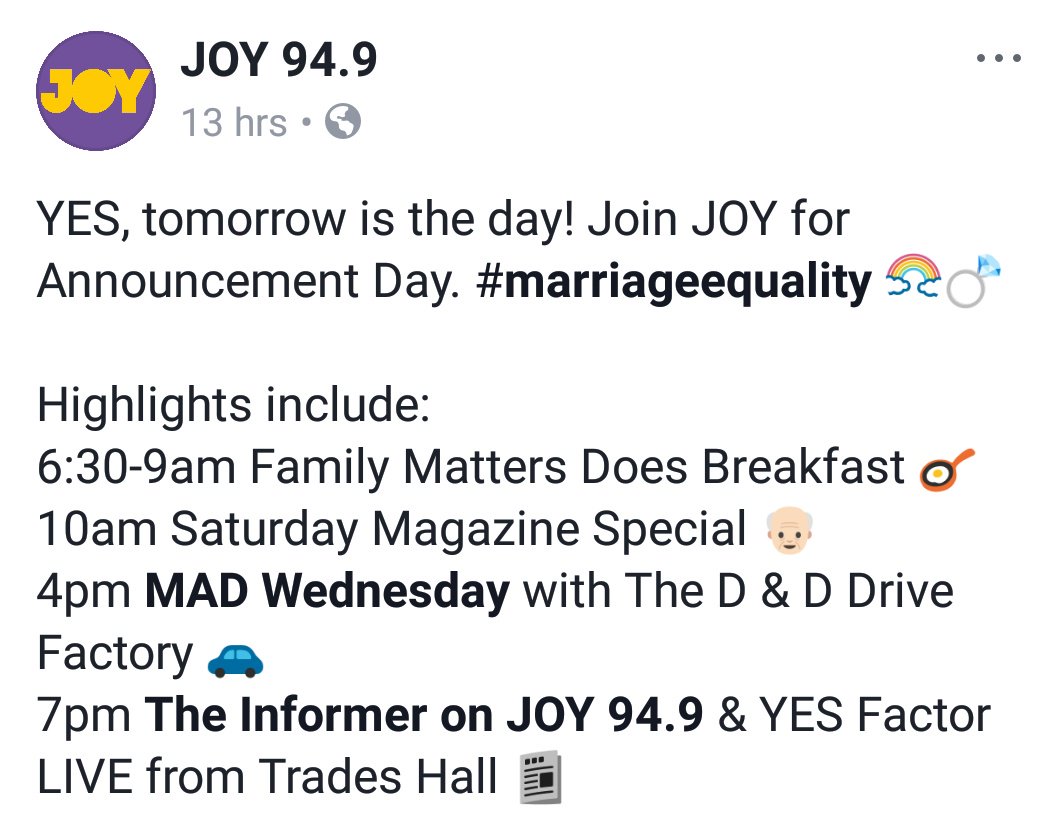 Thank goodness the Nine coverage starts at 9:57am. I needed those three minutes.

Will Queensland be missing 3 precious minutes of Today then? Is nothing safe from the gay communist agenda?

I don’t think think many people who have been campaigning for equality for a long time, let alone since the start of the postal vote would share the same view.

Sorry, I meant since the postal votes were delivered and filled out.

Not equality in itself, that’s been drawn out and contentious for a very long time, yes. 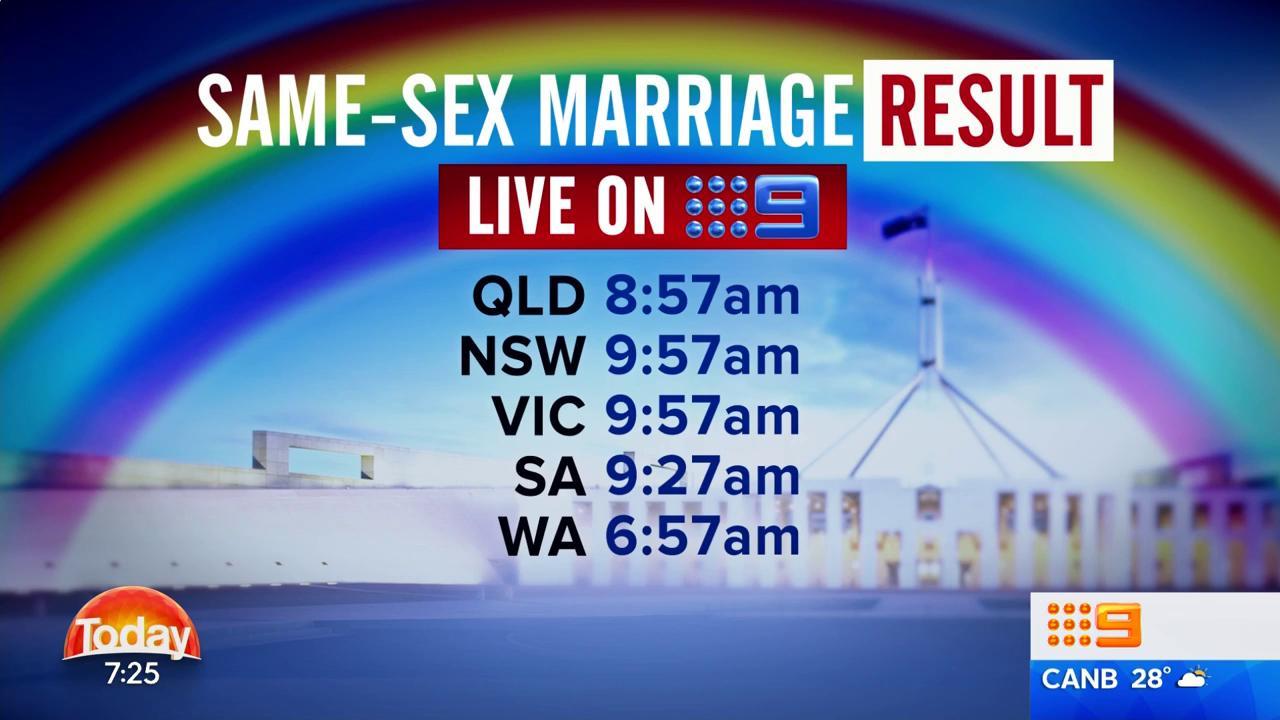 because fuck NT, TAS and the ACT

Sorry, I meant since the postal votes were delivered and filled out.

Not equality in itself, that’s been drawn out and contentious for a very long time, yes.

I still feel that it’s been a really long time. I mean, I feel the entire thing should have ended a month ago.

I see Nine will be having Peter Overton hosting national coverage this morning.

Countdown clock - seen from Queensland - no sign that the result will be live on Ten outside NSW and Vic. 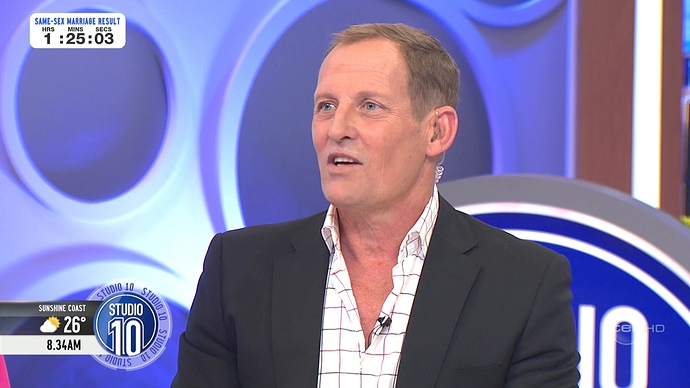