The 2021 Tasmanian state election is scheduled to be held on 1 May 2021 to elect 25 members to the House of Assembly and 3 of the 15 seats in the Legislative Council. 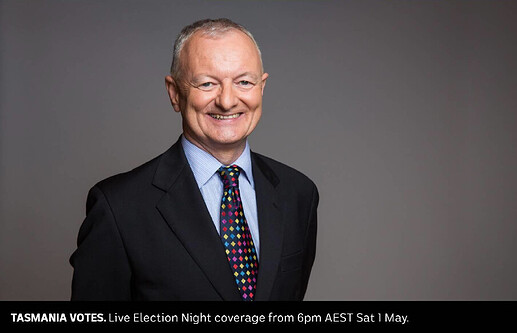 In the final 30 minutes before polls close in the Tasmanian State Election, ABC News brings you the day’s top stories and the latest reports as Tasmania Votes.

Fast, reliable and accurate coverage of results as Tasmania Votes. Premier Peter Gutwein faces his first election as Leader, while the Liberal Party attempt to win three Tasmanian elections in a row for the first time.

An Anzac Day edition of Insiders. David Speers and the panel discuss the week in federal politics and national affairs plus a look at the final days of the election campaign as Tasmanians prepare for the May 1 state election.

Sky News and The Mercury to host People’s Forum ahead of Tasmanian state...

Sky News and The Mercury will host a People’s Forum on Monday April 26 in Hobart featuring Tasmanian Premier Peter Gutwein battling it out with Opposition Leader Rebecca White just five days out from the state election. 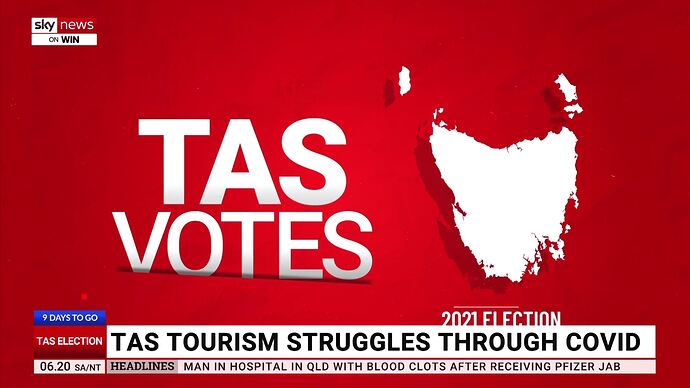 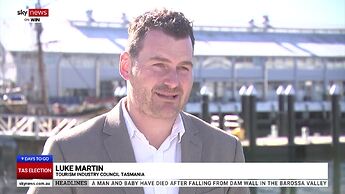 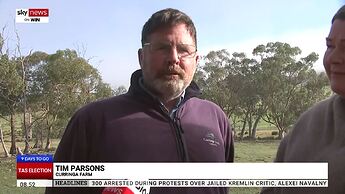 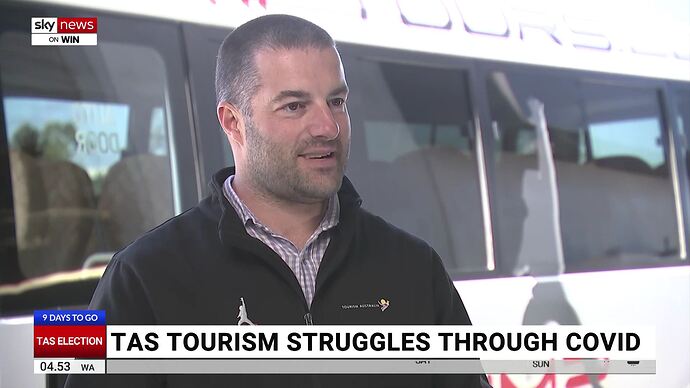 I thought I heard Michael Rowland on ABC Breakfast saying that he’d be down later in the week as well. Would he be involved in the coverage? Is he really necessary with the others there? Guy, Leon and Sabra would all be capable main hosts for the coverage.

I doubt there will be much other coverage, maybe an update or two from WIN but not sure however 7 will likely have some more comprehensive updates. Unlike the other states the elections can take longer to call with proportional system and the quotas here. I’d imagine Richard Herr will feature on Seven’s coverage as they like to often use him as the political expert.

Not sure whether the ABC will have a panel and who they would have on board with that.

7 will likely have some more comprehensive updates

My first Tasmanian election coverage in 1992 with Dr Dean Jaensch and the legendary Judy Tierney. And I'm back for more #TasVotes this Saturday night on ABC TV and ABC News Channel. #politas #auspol https://t.co/Ana1B9EHSM 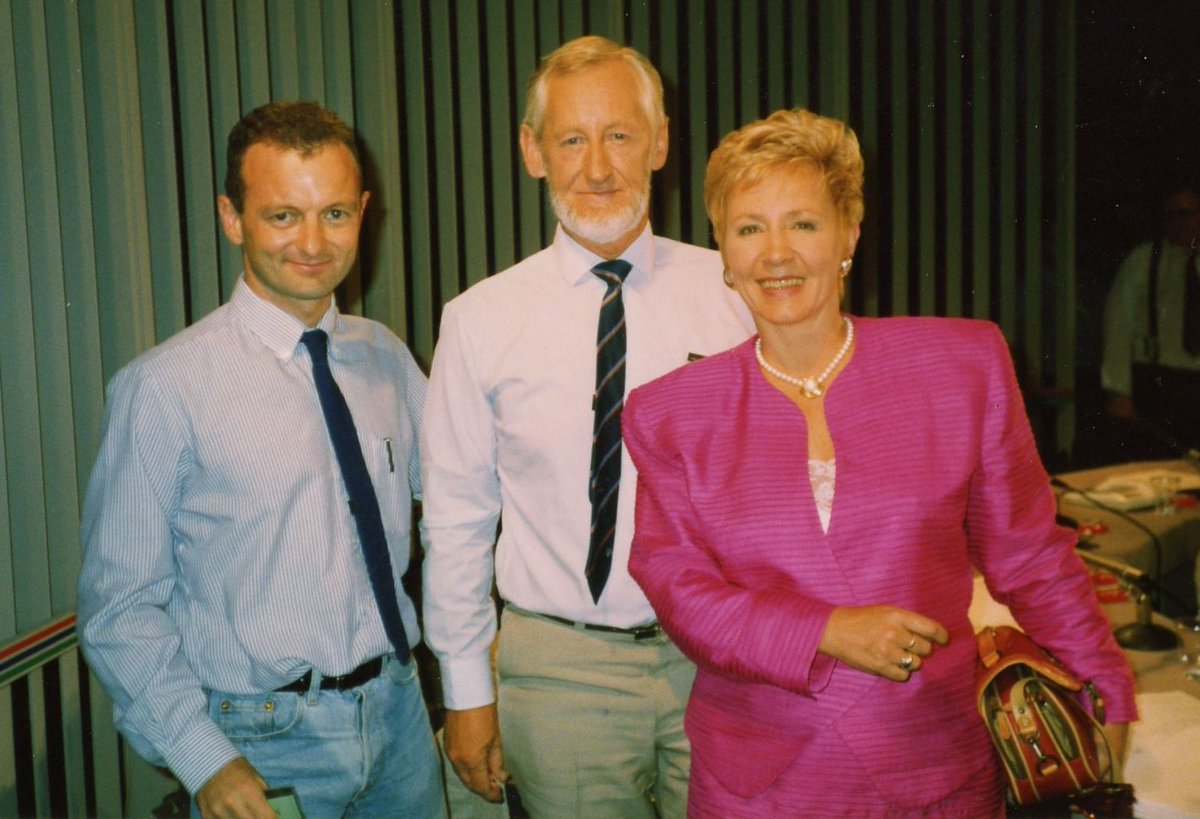 Sabra Lane will be involved in both the ABC TV and radio coverage of the election. She will host a special edition of AM on ABC Local Radio at 8am local time this Sunday, May 2, on the election aftermath.

Not sure whether the ABC will have a panel and who they would have on board with that.

Just checked something else and saw who ABC have for their panel, Liberal Senator Jonathon Duniam, Federal MP for Franklin Julie Collins and former Tasmanian Greens leader and now Senator Nick McKim.

That last one will be interesting depending on how the results go as he was heavily involved in the last Labor/Greens government which is why there’s still so much anger and distrust towards the Greens and why both parties don’t want anything to do with them (so they say).

Thinking about it more and thanks to @littlegezzybear for pointing out the 7 Tas special after the football, I would expect a reasonable update in the half time of the football which is where they usually have an update. Probably up to a 5 minute update with the results and a couple of interviews before their wrap up later which looks like it would be pretty comprehensive at half an hour. WIN will probably give us the results on Monday night but hopefully might be able to arrange some sort of thing on the night.

Had they had the Nine affiliation already and likely had more viewers they would possibly do more but with the Ten affiliation it’s probably not worth it. Not expecting anything from TDT though.

Does 7 Tasmania not do live election coverage on the night?

Nope - there’d be riots in the streets if the AFL was cancelled or shifted for election coverage!

Don’t they have multi channels in Tasmania? 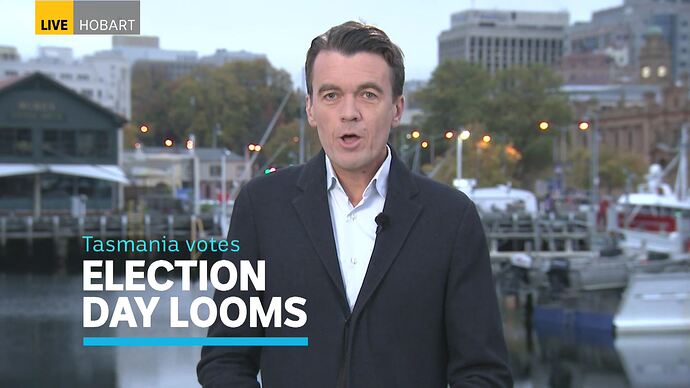 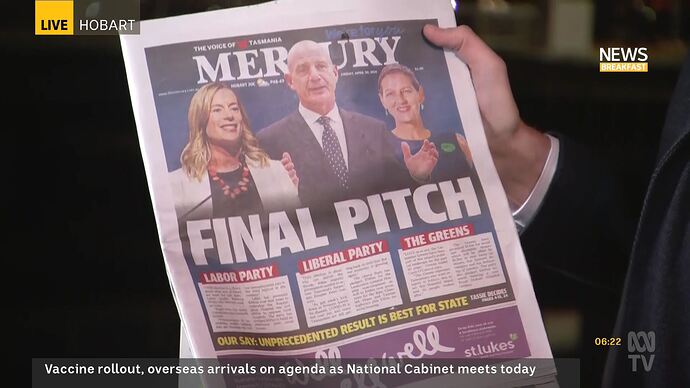 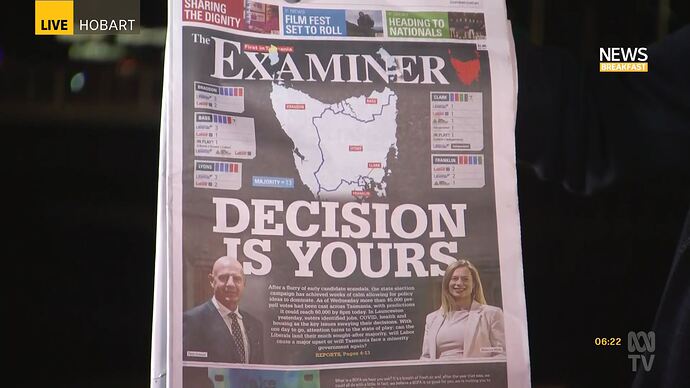 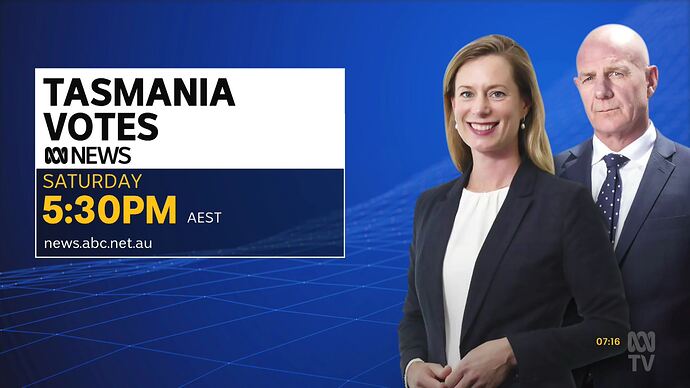 Just set all my recordings across the various channels for tonight. One that I had forgotten about was SNOW. Sky News will be doing live coverage of the election tonight, which could mean there are WIN reporters out there tonight and could also mean that there might be some updates on the main WIN channel throughout the evening. I have however set all the recordings for ABC (even though everyone can easily get that coverage but it is my preferred one) and for Seven for half time in the Cats smashing the Swans and their program afterwards and for SNOW. I will channel surf at times to Nine but I doubt they’ll have anything.

Just heard them mention on ABC Local Radio about the coverage tonight too. The AFL will still be on however they will be having half hour updates from Pia Wiirsu who is the Northern Tas drive presenter and they will also break into the AFL with other major developments and speeches.

Usually when the AFL is on a state election day, the ABC’s AFL broadcast will end at 6pm local time followed by live election coverage. With ABC News Radio taking the simulcast of the TV broadcast led by Sabra Lane and Guy Stayner, it can afford to continue the footy tonight.