From what I’ve heard about “Yummy Mummies”, Australian TV is about to hit a new low with this show.

I personally hope it’ll be a 2017 ratings megaflop for Seven!

For those whose who missed the promo from December last year:

I remember when I was holidaying in Tasmania back in March, the promos for this program was on at almost every ad break on Southern Cross!

That’s just say that this is just a stereotypical show.

Hopefully this show will last one week fingers x

The new promo is attached to this article, Oh honestly. 7 gets tackier as each year passes. Though hopefully it will crash and burn quickly, very quickly.

I guess I should be thankful I haven’t seen one promo yet. Poor Southern Cross viewers!

I’ll have you know, RPDR is quality television.

These stunning young mums-to-be have model good looks, glamorous lives and are never seen without their high heels, designer wear and latest accessory: their baby bump!

The Yummy Mummies make elaborate plans for motherhood and have outrageous opinions of what to expect while they’re expecting.

In Melbourne, LORINSKA MERRINGTON, RACHEL WATTS and JANE SCANDIZZO await the arrival of their soon to be pampered princes and princesses. The Melbourne Yummy Mummies are committed to their stylish social calendar and are firm believers that no baby is going to come between them and their luxurious lifestyles. These women are straight talking and hilarious; when they’re together no subject is off limits.

In Adelaide, MARIA DIGERONIMO and her excitable Italian family get ready to celebrate the arrival of their first grandchild. Their obsession for shopping reaches new heights as they discover designer babywear, gadgets, prams, ridiculous accessories and lavish nurseries. No expense is spared for the arrival of their precious baby. Maria and her family plan an elaborate baby shower and the Melbourne Yummy Mummies are invited.

When all the Yummy Mummies meet things get competitive as they try to outdo each other with the most lavish baby showers, extravagant push presents and luxurious baby moons. These indulged mums-to-be can’t help their hormones as opinions and sparks fly between them.

As the bumps get bigger so do the demands and naïve expectations of these mumsto-be, but before they know it their perfect lives are due to be turned upside down because… the babies are coming! 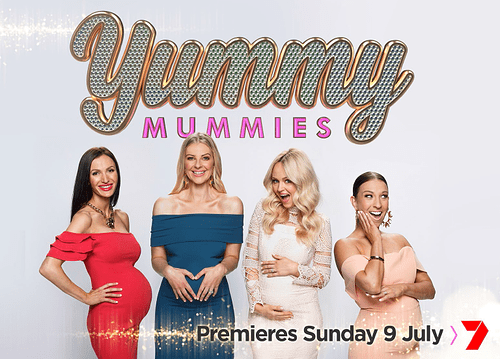 There is a feature interview in today’s Herald Sun with the cast. The article mentions the show continues in its regular timeslot of Tuesday 8.30pm from July 11.

This show got a terrible review on TV Tonight. Here’s another that is possibly even worse.

I watched the worst new show on TV

JUST when you thought homegrown reality TV couldn’t go any lower, in comes Yummy Mummies to complete the descent.

It’s reality roadkill in the chase for ratings.

Tripe that I watched, so you don’t have to.

My favourite line in the TV Tonight review was this:

I wonder if there is a back up for episode 2 that is scheduled for Tuesday.