From Tuesday 10 May at 8.30pm AEST on SoHo Channel 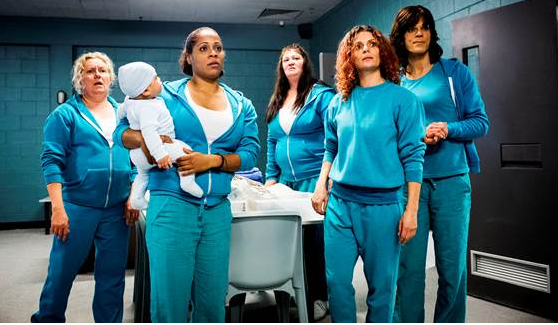 Foxtel today announced Tuesday May 10 as the premiere date for the fourth season of its internationally acclaimed Australian drama series Wentworth.

The story resumes four months after the events seen in the fiery season three finale. The women of H block are returning to Wentworth Correctional Centre to find a new dynamic is in play which will have immediate ramifications for Bea as Kaz Proctor has established a power base. On the outside, Franky is trying hard to be a productive member of society.

As always, no-one should underestimate “the Freak”. Notions of love and obsession will underpin the 12 episode season.

An Audience With The Cast Of Wentworth special tonight on SoHo was a lot of fun.

It was. So goddamn pumped for season 4.
God I love Pamela Rabe!

The season 4 premiere of Foxtel’s acclaimed Australian drama Wentworth was the most watched program on subscription television last night.

The episode secured 160,000 viewers last night on SoHo. The overnight result is a 33 per cent increase on last year’s premiere

“Congratulations to the incredible Wentworth cast and the production team led by FremantleMedia Australia’s Jo Porter and Foxtel’s Head of Drama Penny Win.”

Awesome start to the new season. I don’t like the new nurse.

She is terrible! Her acting is shocking and I let seems a lot if people agree with me!

Does anyone else think that Linda Miles is a underutilized character? She is great. Last nights episode was pretty good. Hopefully they’ll renew it for Season 5

Does anyone else think that Linda Miles is a underutilized character? She is great.

Looks like she’s stepped up this season since Vinegar Tits Vera was made Governor.

Wentworth is now shown in 92 countries
the daily telegraph

Was starting to think this season was a bit ordinary but last night’s episode was great. A well constructed story and a brilliant cliffhanger.

I think the whole season has been great, and this week’s episode was the best one yet. The final Bea/Joan scene was brilliantly made and edited.

And this week has suddenly moved from Five to 5 Star, I assume due to poor ratings. A travesty for such a high-quality show and season.

Oh, okay. Still, it means they’ve relegated it after only three episodes of S4. Apart from the move, viewers are complaining that 5 Star is not HD.

I hope Ch. 5’s involvement or not isn’t a significant factor in whether it gets renewed.

This season has been very average in my opinion. There’s only been a few episodes that I haven’t got bored watching. There was so much hype around this season, but I feel like it’s been a let down. I do hope that they renew it for another season though.

Foxtel has renewed the series for a fifth season

Foxtel has today renewed its longest running original Australian drama series Wentworth for a 12 episode fifth season to premiere in 2017, only on Foxtel.

With season four set for an intense finale on Foxtel’s SoHo next Tuesday, Foxtel confirmed FremantleMedia Australia will commence production on the internationally acclaimed drama in Melbourne next month.

Foxtel Head of Drama Penny Win said “Wentworth has gone from strength to strength over the past four seasons. Not only is it an international television success story, now showing in 141 territories, it is a ratings blockbuster and fan favourite for Foxtel audiences. We are extremely proud of this long-running drama juggernaut.

“It was a very easy decision to commission a further season of this brilliantly constructed and crafted program from our production partner FremantleMedia. There is a lot in store both for the women behind bars and those on the outside.”

FremantleMedia Australia Director of Drama and Wentworth executive producer Jo Porter said “As season four comes to a close, the audience has witnessed a dangerous shift in the power base at Wentworth which is building to an unmissable conclusion next week.

“Wentworth has built a reputation for delivering a world with unexpected twists and turns where no character is safe. The season’s end provides a chilling platform for our script producer Marcia Gardner and the writing team to shape the next chapter for our regular characters, along with some new faces in the yard and on the outside. With series producer Pino Amenta at the helm, our ambition to keep lifting the bar and reward our audience both locally and internationally couldn’t be stronger.”