Coming soon promos for the new season are airing.

The Logie and AACTA award winning comedy about good government gone bad returns for another season.

Big dreams. Bigger budgets. And still, so little to show for it.

Set inside the offices of the “Nation Building Authority”, a (fictional) organization responsible for overseeing major government initiatives, Utopia explores that moment when bureaucracy and big dreams collide.

The award-winning series follows the working lives of a beleaguered team in charge of guiding big
construction schemes from announcement to unveiling. Constant shifts in priorities are the order of
the day as the staff are forced to oversee projects that the feasibility study said were not
actually feasible. Everything from light-rail to high density urban developments. Toll-roads to
high-tech traffic management systems. In short, Utopia examines the making of a very well-designed
white elephant.

Featuring a brilliant comic cast led by Rob Sitch, along with Celia Pacquola, Dave Lawson, Dilruk
Jayasinha, Kitty Flanagan, Anthony Lehmann, Emma-Louise Wilson, Nina Oyama, Jamie Robertson, Mike
McLeish, Rebecca Massey and Toby Truslove, Utopia is a comedy for anyone who has ever endured the
bureaucratic process – and lived to laugh at the ordeal.

Utopia is written and produced by the award-winning team of Santo Cilauro, Tom Gleisner and Rob
Sitch. Michael Hirsh is Executive Producer. Original Casting by Jane Kennedy. Series Casting by
Kate Leonard. The series is directed by Rob Sitch. 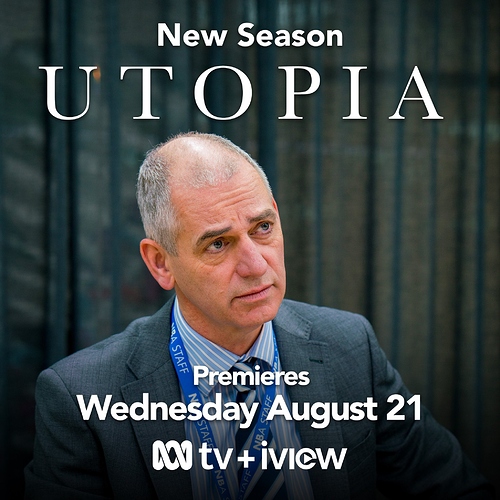 Has Utopia been removed from Iview? Just went searching for it to catch up and couldn’t find it.

Set inside the offices of the “Nation Building Authority”, a federal government organisation responsible for overseeing major infrastructure projects, Utopia explores that moment when bureaucracy and grand dreams collide. It’s a tribute to those political leaders who have somehow managed to take a long-term vision and use it for short-term gain.

So glad that a new season of Utopia is happening. Rob Sitch is great in this lead role, and so are the ensemble cast. The was they tease government offices and their policies is hysterical.

Great to see Utopia is back.

It will be interesting if Working Dog can use the same office space in Melbourne where they filmed the previous four seasons.