^ The Stig says (in English) “Chewie, we’re home.” Not sure what Chewie refers to.

I’m a bit late to the thread but LOL

Though the show was up against BBC1’s coverage of Euro 2016 last night (6.3 million) but still not looking good.

No surprise that Chris Evans has quit the show after one season.

“I have never worked with a more committed and driven team than the team I have worked with over the last twelve months,” he said. “I feel like my standing aside is the single best thing I can now do to help the cause. I remain a huge fan of the show, always have been, always will be. I will continue to focus on my radio show and the allied events that it encompasses.”

The season finale only attracted 1.9 million viewers on Sunday.

The new season premieres on Nine at 7.30pm next Wednesday (July 20) in Sydney and Brisbane, and next Thursday (July 21) in Melbourne, Adelaide and Perth, so it’s a quick turnaround.

9 weeks: yeah kinda, but the series has already finished screening in the UK.

The BBC has reportedly decided not to produce the Christmas specials (which has been an annual tradition for the show) so the producers can concentrate on the next season, which will air early next year.

What do people think of the new series with Chris Evans and Matt LeBlanc? (on Nine right now).

To me, they don’t gel together as well as Clarkson/Hammond/May, and they could probably use a 3rd co-presenter.

Nine are sure going out of their way to not mention Evans on their promos.

Why did Nine run this in prime time on the main channel anyway?

I don’t think it will be there for long.

Why did Nine run this in prime time on the main channel anyway?

I don’t think it will be there for long.

The show has been moved from the main channel to 9Go! from next week, at 8pm Mondays.

I thought the most likely move would be to a later timeslot, or a different night, but to have been shunted to 9Go! already is a bit of a surprise.

Here in Melbourne, the promo for next week’s episode still has it at 7.30pm next Thursday. Obviously with the late programming change it was too late to change the promo.
Nine has also secured the rights to Extra Gear, the companion series to Top Gear. Extra Gear can only be seen on 9Now.

The BBC has confirmed Matt LeBlanc will return to host Top Gear for a second season, alongside Chris Harris and Rory Reid with regular appearances from Eddie Jordan, Sabine Schmitz and The Stig.

The new season is already in ratings trouble in Britain. Last week’s season premiere only pulled 2.8 million, down from 4.4 million for season 23 premiere last year.

According to a promo shown on Nine tonight, the 25th season of Top Gear will premiere on 9GO! on February 28, with each episode shown two days after the UK broadcast. It is different from the past few seasons which aired on BBC Knowledge first, before it went to Nine months later.
Here is the promo: 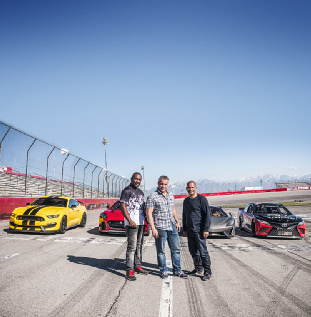 Express from the UK, the world’s biggest motoring show, Top Gear, is back with all-new, high-octane action and adventure, premiering Wednesday, February 28, exclusively in Australia on 9GO!

In the Australian premiere, join hosts Matt LeBlanc, Chris Harris and Rory Reid as they trek across the world, from Japan, the USA, Portugal and Italy, with appearances from German race ace Sabine Schmitz, F1 mogul Eddie Jordan, and the international man of mystery himself, The Stig.

Not just a car show, Top Gear, now bigger and better than ever, is about friendship and adventure, so come along for the ride as the boys let you travel the world from the comfort of your own home, showcasing incredible cars and some not-so-desirable vehicles.

Watch the team as they try building the world’s fastest tractor, race up a mountain in Japan carrying giant Sumo wrestlers as cargo, put their foot down through America’s Wild West in shiny new V8 sports cars, attempt to land a NASA research plane, and much more.

This season, expect state-of-the-art supercars, celebrity guests, and a healthy disrespect for presenter safety with plenty of destruction and fiery explosions, as the team tackle the big issues in motoring.

ENCORE FRIDAY, MARCH 9, AFTER THE NRL ON NINE