Who will be the new Host of The X Factor in 2016?
Archived Topic

Wouldn’t mind if they managed to nab someone like Scott Tweddie who does The Loop on Eleven among other things.

In terms of judges… I think Chris Isaak needs to go. They should try and lure someone like Mel B back. I know so many didn’t like here (especially on this forum) but she was opinionated and passionate but always fun and having a laugh which was missing this year. No doubt they will keep Dannii if they can and even try and get James back but Guy didn’t really do it for me this year. Who knows.

It would be hilarious if they got Darren McMullen after The Voice nabbed Ronan Keating.

Scott would be a really good option actually. Or Fuzzie (go out of the box). Or both!?

Guy didn’t really do it for me this year.

They should try and lure someone like Mel B back.

It would be hilarious if they got Darren McMullen after The Voice nabbed Ronan Keating.

Yeah I saw that…I assumed Ronan wasn’t keen on the whole deal but obviously there were other factors at play if he left X-Factor just to return for something similar?

Jess and Matt’s album was the highest selling album by an Australian artist last week ahead of Cyrus and was #10 on the overall albums chart. Goes to show that they have a fanbase despite coming third and I think should definitely be given a go at releasing original material.

Goes to show that they have a fanbase despite coming third

I can imagine their fan base - the same little twerps that probably ‘like’ their cutesy pics on Instagram, and probably post sassy tweets about The Bachelor on twitter. It was increasingly obvious during the run of the X-Factor that where they were initially viewed as crap, they were then ‘positioned’ for this demo.

Don’t know what you are talking about. They were very talented and something different that we don’t really have in the aussie market. Also wasn’t the Bachelor finale the most tweeted show ever in Australia or something like that? If that’s the case then if you are linking them to that, that’s a lot of support.

Also I thought Cyrus being a young good looking guy would appeal more to the audience you describe, Jess and Matt have wider appeal IMO.

[quote=“Firetorch, post:8, topic:355”]
I can imagine their fan base - the same little twerps that probably ‘like’ their cutesy pics on Instagram, and probably post sassy tweets about The Bachelor on twitter. It was increasingly obvious during the run of the X-Factor that where they were initially viewed as crap, they were then ‘positioned’ for this demo.[/quote]
You seem well acquainted with them. Good for you. lol

I actually like their song. I first heard it on the radio and was surprised to hear it was someone from X factor, since I had not watched the show. If they continue to produce music like that, they could carve out a decent career for themselves.

Yeah I don’t disagree - I think it was the best out of an average three.

I wonder if Andrew Morley is being considered for the hosting role. Saw him on Sunrise this week and thought he handled live tv well plus he’s already known from being on Home and Away. (Cue the never heard of him replies)

Oh, that guy from Lightning Point? 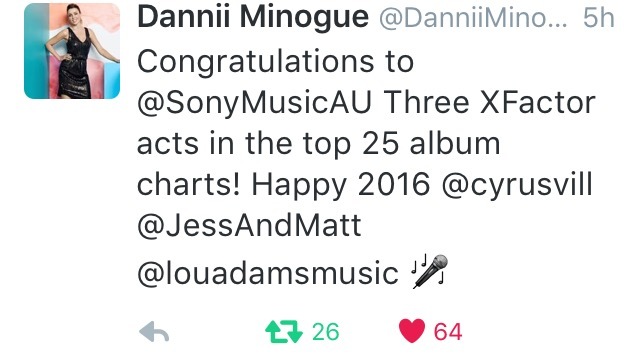 Jess and Matt’s album will probably outsell Cyrus’ album. Cyrus peak was #9 and that’s the same as Jess and Matt, but their album has been ahead of his for the last two weeks. Louise Adam’s album peak is #22.

Jess and Matt are already in the studio recording for an original album.

This was a bit of a surprise. Brothers 3 who are now with Warner Music Australia have a new album out and it debuted at No.11 on the ARIA Chart this week. Meanwhile Jess & Matt slipped just out of the Top 20. Hopefully their album will be certified Gold in the next couple of weeks.

@Rutzie I think that’s a brilliant suggestion. Andrew seems to be everything Luke wasn’t. He’s confident, down to earth and relatable. Take note Seven.

If Andrew Morley gets the weather gig on Sunrise, there would be a good chance he could then go on and do the hosting role on X Factor too.

It’s a pretty big gig for such a newbie but X Factor really needs things to work this year. Last years experiment just didn’t pay off.

They need to re-engage the younger demo. A fresh, young host with a younger judging panel should help.

News Corp reports Seven is undecided whether to bring back The X Factor for this year or postpone the next season to 2017.
I think Seven is in a difficult situation. If The X Factor is rested this year, it means The Voice will be the only singing show to air this year and will get all the attention. It also means Nine will once again dominate the younger demographics, something I always suggest Seven should (and must) fight for. Seven will also need to find other programs to fill the 7.30pm timeslots on Sundays and Tuesdays in the fourth quarter of this year.
But if The X Factor returns this year there is a risk of continuing decline in TV ratings like what happened to Australian Idol a few years ago.