The Family Law starts on 14 January at 8.30pm on SBS. Archived Topic

Popular author Benjamin Law is making a permanent move into TV, with several projects on the go
Sunday Telegraph article

The first episode of The Family Law will be made available to view on Facebook from 5pm Friday 8 January for approx 55 hours before it is show on SBS on Thursday 14 January.

Why Facebook and not on demand? Shouldn’t SBS try to promote their own platform?

You’d think so. Maybe they want people to share it around easier but you’d think they probably could have still done that with a link from a Facebook post.

The first episode debuted on Facebook and according to Mumbrella

144,485 people viewed more than 30 seconds of the 24 minute show The Family Law, while 22,978 people watched more than 95 per cent of the show, allowing for a drop off when the program reached credits.

It’ll be interesting to see how this might affect ratings. Will people be interested enough to tune into the show now? Or will they not bother after sampling a few minutes online?

We’ll see when it debuts this Thursday night at 8.30pm on SBS.

I enjoyed the first episode and there were some very funny lines especially from Ben’s inappropriate mum. I also liked the ‘perfect’ half-Japanese half-Australian neighbours. I was expecting a bit more in the way of laughs but maybe they had too many spoilers in the previews.

I forgot to mention the letterbox presentation of this show. I’m assuming it is being filmed in 21:9 in anticipation of even wider screens in the future?

I have noticed music film clips have recently started using this wider screen presentation but never a TV show before now. Is this the first Australian TV series to be shot in 21:9?

Is it happening anywhere else in the world? I recently learnt that they had filmed the old The X Files in 16:9 but screened it in 4:3 back then. Are they possibly filming other series in 21:9 for the future but screening them in 16:9 to avoid the letterbox effect?

Just watched the replay on SBS2. I enjoyed it! Being of Asian descent, this is almost the story of my life.

Didn’t like the first episode but this show has got a lot better over the next two episodes.

6 episodes is way too short

Yes - I was underwhelmed by episode one; but the subsequent ones have been much better.

Ahem, ahem. In breaking news, your bribes/threats worked and this is now officially in development. #TheFamilyLawSBS https://t.co/HvLW04qkX3 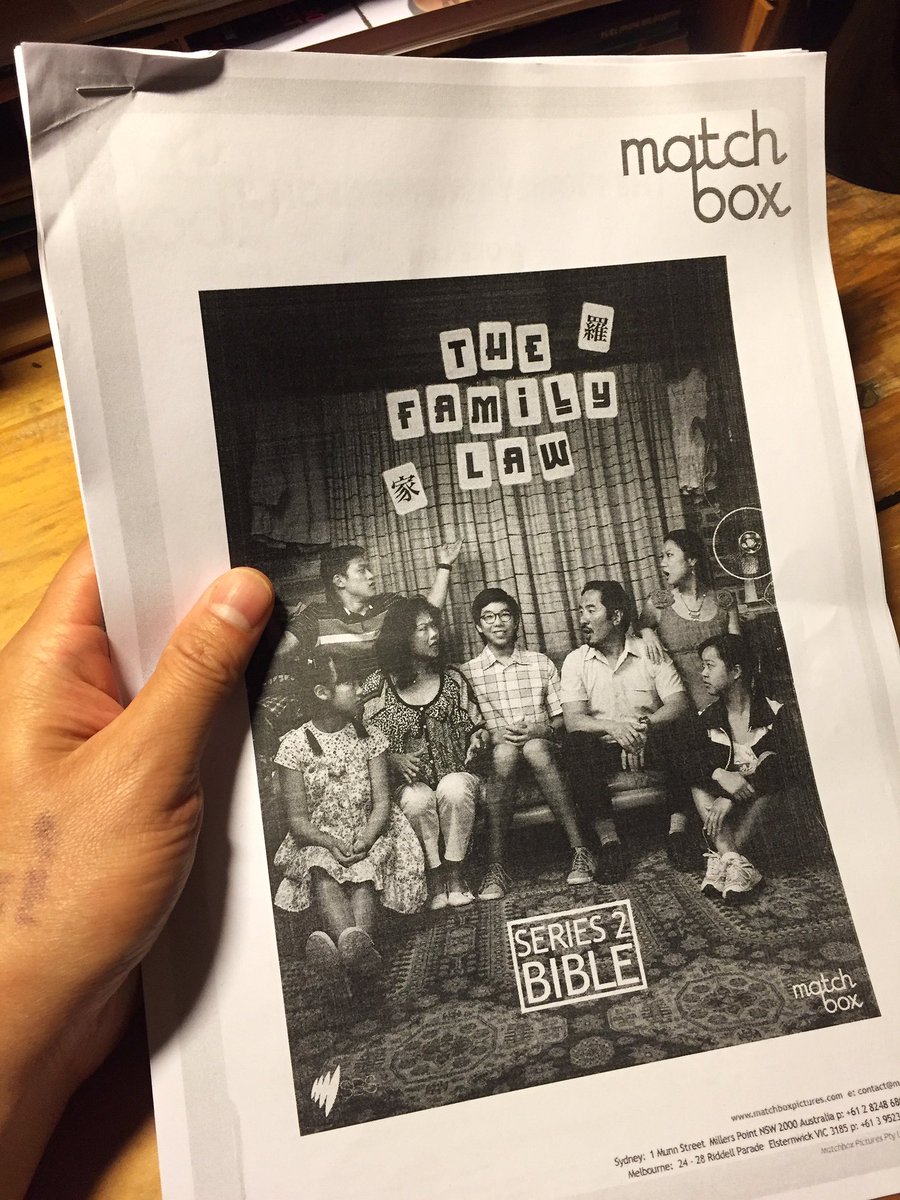 Great. I really enjoyed this series.

The Sunday Telegraph says today season 2 will start filming later this year and will be shown next year.

SBS today is pleased to announce a second season of The Family Law is in production.

The Family Law first hit screens in January this year to critical acclaim, securing an average national audience of 417,000 across the series, was the highest viewed program on SBS On Demand throughout its season, and attracted a huge 1.1 million views for its exclusive Facebook-first premiere.

Written and created by Benjamin Law, and based on his memoir of the same name, The Family Law is a coming-of-age story told through the eyes of teenager Benjamin, as he navigates growing up amidst the chaos of his hilarious, heart-warming and dysfunctional family.

The Family Law is developed and produced by Matchbox Pictures (The Slap, Nowhere Boys, Glitch) in association with Screen Queensland, Screen Australia and SBS.

Marshall Heald, SBS Director of Television and Online Content, said: “As well as being laugh-out-loud hilarious, season one of The Family Law was also poignant and heartfelt. On one level it appeared the story of a family who was different – an Asian-Australian family – but at its heart it’s a universal story of any normal Australian family grappling with the everyday challenges of life, love, friendships and teenage angst – universally relatable themes. I can’t wait to see what Benjamin Law and the talented team at Matchbox Pictures have in store for the Laws in season two.”

After the Law family’s summer to remember, a wiser, more-mature Benjamin now understands that sometimes, parents just work better apart. Simple, right? Yeah, no. In season two, Benjamin and the Laws are excited to explore fresh careers, fresh ambitions, even fresh romances. But as we all know, in the baking Queensland sun, nothing ever stays fresh for long …

Benjamin Law, series creator, said: “One of the most satisfying things about season one of The Family Law was seeing how many audience members – Asian and non-Asian Australian alike – felt their own families were finally reflected back at them. We’re excited to be putting a 90% Asian-Australian cast on TV again, and picking right up from where we left the Laws. Once again, we’re looking forward to making people laugh as much as they cry from their hearts breaking – partly, because we’re mean, but ultimately because that’s what family’s about, really.”

Tony Ayres, Executive Producer, Matchbox Pictures said: "Matchbox was thrilled to bring season one of this exuberant and heartfelt comedy to audiences both here and internationally. So we’re (more than) doubly thrilled to be back for season two, which will be funnier, ruder and even more poignant.”

Sally Caplan, Head of Production at Screen Australia said: “Screen Australia is delighted to work with this team again on the second season of The Family Law. Season one was the perfect balance of laughs and heart. It really resonated with audiences and we hope that its popularity will encourage more diverse stories on our screens.”

Filming will begin on The Family Law season two in Queensland later this year, and the series will air on SBS in 2017.

Everyone’s favourite almost-functional Asian Australian family, The Laws, are back – returning with a double episode of The Family Law on Thursday, 15 June at 8.30pm on SBS. After a summer to remember, Jenny Law and Danny Law have amicably parted ways, and a wiser, more-mature Benjamin now understands that sometimes, parents just work better apart.

With the holidays over the Laws are turning a new leaf – or, as Jenny calls it, a “new flap”. Danny – having sold Happy Dragon – opens ‘Asian Alley’, an Asian grocery store and his first entrée into retail, while Jenny embarks on a quest of self-discovery. Resuming his role as family fixer, Benjamin helps his mother “find herself”, his father prove himself, and tries to stop his family from going off the rails – all while juggling his star-making turn in Sacred Heart High’s ground-breaking school production of a feel-good hit about infanticide, Medea.

The new season of The Family Law will be even more painful, hilarious and poignant than the first. With more gasp-inducing honesty and hair-raising Jenny-isms, welcome back to the post-nuclear family you know and love, where membership sometimes feels like a sentence. Just like your own, really.

SBS Director of Television and Online Content Marshall Heald said:
“After a hugely successful award-winning first season, we’re thrilled to be back with a second season of this original and uniquely SBS series. Season one of this bold and clever show really resonated with Australian families and audiences.

“Bringing this fantastically diverse cast back to our TV screens for a second season enables us to explore and navigate through the next chapter of their lives – doing it all in the hilariously lovable family Law style.

Based on Benjamin Law’s hit memoir of the same name, the critically acclaimed first series was awarded ‘Best Casting in a TV Comedy (Casting Guild of Australia)’ and ‘Comedy Series Production of the Year (SPA Award)’ – it also earned two AACTA nominations.
With the aim of engaging even more Australians, the new season of the much loved comedy drama will once again be available with simplified Chinese subtitles, in addition to Korean and Vietnamese subtitled versions, via SBS On Demand for viewers to watch anytime on their favourite device.

Season 1 of The Family Law will be available on SBS On Demand from June 8.

The second season is great. Might even be better than the first. Many laugh out loud moments.

Loved the first 2 episodes! Hope the rest of the season stays this way.