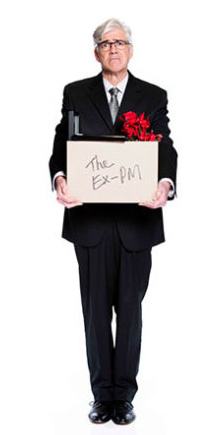 After the surprising success of his autobiography, Ex-PM Andrew Dugdale (Shaun Micallef) answers his party’s call to stand for election in a marginal Murray Darling electorate. They tell him they want a ‘sure thing’ in the contest.
With his entire household in tow, all of them working on his campaign, Dugdale sets up house at the local sewage farm and begins engaging with the local community, particularly over a contentious plan to expand a national park that will wipe out the local Nandos.

Although his team are desperate for him to avoid saying anything substantive in the campaign, will Dugdale be able to stay silent when he discovers the park expansion is being funded by an eccentric local billionaire and the race is a hotbed of corruption?

Runs for: Six x 30min episodes, on ABC and iview

Season 2 is coming to Thursdays according to a promo aired tonight.

The original season of The Ex-PM will be available on ABC iview from Friday 13 October. 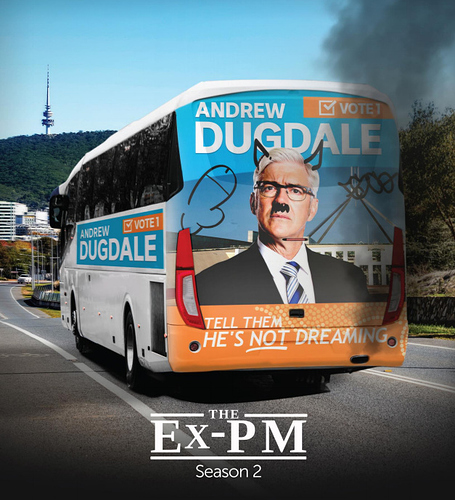 The Ex-PM season 2 is a 6-part comedy series starring the incomparable Shaun Micallef as Andrew Dugdale.

He won a Federal election on preferences; a knife-edge victory unparalleled in this country’s political history. He served the nation with distinction for a period that even his harshest critics describe as ‘his only time in office’. He was just the 23rd world leader to co-chair a NATO summit since 1987. He was Australia’s 5th most popular Prime Minister… Then he wasn’t. But now Ex-PM Andrew Dugdale is a political darling again thanks to his well-received autobiography (documented in series one).

Thanks to his renewed fame, Dugdale is called back into the fold to stand for election in the marginal Murray-Darling-Downs electorate. If revenge is a dish best served cold, then grab your tongs, open the chest freezer and start loading up your plate… Ex-PM Andrew Dugdale is back.

The government’s one seat majority is under threat and thanks to Dugdale’s local investment property in the electorate – a sewage farm Henry (John Clarke) encouraged him to buy – Australia’s suddenly relatable, longest serving caretaker Prime Minister, is the perfect man for the job.

Dugdale ships his dysfunctional extended family (and now campaign team) into regional Australia to commence their push for Canberra.

With the zeal of the enlightened (or deranged) the team engages with the local community through a series of oddball public appearances and media engagements. Campaign donations, global warming and religious intolerance combine with scandal, corruption and greed in the race to make an Ex-PM our nExt PM.

With the help of a bevy of high profile guests including Vince Colosimo, Lisa McCune, Frank Woodley and Ian Smith – the series tackles the hypocrisy and absurdity of politics at every level.

The Ex-PM Series 2 is a tale of political selfishness and self-discovery.

Some great guest appearances like Nick Xenophon as the Prime Minister.