It’s also the “Weather Wall” when Bailey is around.

Officially known as ‘The Daily Bailey Weather Wall, the forecast where you get it all’.

To avoid getting off topic in last night’s ratings thread, I’m responding here:

Is Meakin still on Ten’s payroll? If so what on Earth has he done since joining Ten?

I think Peter Meakin might’ve since left Ten or at least has a very reduced role with them these days? I’m not sure who’s currently in charge of Ten Eyewitness News on a Sydney or national level, to be perfectly honest.

In any case, Ten really need to do something about their news service and sooner rather than later. If it keeps going way it’s going at the moment, I’m very sad to say that I wouldn’t be surprised if Ten Eyewitness News eventually dies a very slow and painful death.

Although I certainly don’t think that Ten’s news service has to go that way. By having the right people in charge who are willing to provide viewers with a strong point of difference to the news services of other networks, I believe that Ten Eyewitness News can not only survive, but thrive.

It was announced on April 28th earlier this year that Peter Meakin was taking on a reduced role of Executive Consultant for News & Current Affairs effective 1st May. John Choueifate was announced as being appointed as Executive Director, News from that date also.

The press release can be found here: http://images.tenplay.com.au/~/media/Corporate%20Site%20Media/Files/Media%20Releases/2016/John%20Choueifate%20Appointed%20Network%20Ten%20Executive%20Director%20News.pdf

John Choueifate is the Ten News boss, while Peter Meakin is in a consultancy role

News veteran Peter Meakin moves to a consultancy role after 2 years with TEN, as News Director is promoted.

11 posts were merged into an existing topic: Computer Help

A post was merged into an existing topic: Computer Help

Posts related to Luke’s question regarding uploading videos to You Tube have been moved to the “Computer Help” section.

The ADF would’ve paid for her to go over. They are generally puff pieces. If ten had invested in this they may have promoted it.

If Seven or Nine had one of their news reporters in Afghanistan, you can bet that they’d hype up the promotion of their reporter being “Inside the Front Line” and that it’s a “Major Exclusive” or something like that.

If I was Ten, I would definitely be heavily promoting Amanda Hart’s reports from Afghanistan because it’s a rare “Exclusive” for Ten’s news service these days which the casual viewer who doesn’t usually watch Ten Eyewitness News: First At Five just might be quite interested in!

They are doing nothing for the dwindling ratings. Use to be a time slot winner and now they are hovering around 400k

Yep, it’s very sad. A few years ago I remember many on Media Spy regarding Ten’s news service as a better product than the Seven/Nine equivalents. For all the criticism that both Seven and Nine’s news services get (quite a lot of which is quite justified, I might add), I don’t think you can say that Ten’s news service is superior to “the big two” these these days for reasons that have been very well documented.

In all honesty, I actually do want Ten Eyewitness News: First At Five to rate well because viewers are undoubtedly better served with more choices for news on TV rather than less. But it’s very hard to support Ten’s news service in it’s current state especially when the network has only one news bulletin a day which will often take weekends off due to sports coverage!

I don’t think you can say that Ten’s news service is superior to “the big two” these these days for reasons that have been very well documented.

I can and will

Now, fast forward 6 or 7 years… Their flagship nightly bulletin struggles to get 500k!

I’ve noticed the Brisbane bulletin ends now with something like “Stay on TEN throughout the evening for news updates & for more news at 6:30 with The Project”.

No mention of WIN Local News or Family Fued, sounds much better.

Interesting use of the Adelaide set tonight, with a cross to Kate Freebairn on set 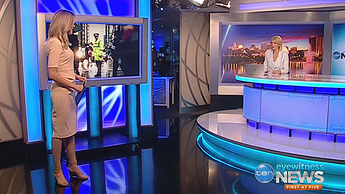 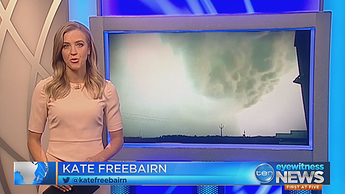 Adelaide really does have a nice set! My favourite Eyewitness set despite being one of the smallest.

It really is so much more polished and modern looking compared to the rest & they seem to be intent on making the most of it which is great to see… considering as mentioned it’s fairly small, has static panels instead of screens like most other states and they’ve made the most of its newsroom location and no proper studio to speak of.

I wish Brisbane would do something with their set, there is so much room and potential there! It’s merely a shadow now on its former incarnations over the years and the latest refresh left a lot left to be desired. They need a proper bulk head, weather screen & presentation area, fix the whole lighting and panneling on the walls beside the screens either side.

Interesting use of the Adelaide set tonight, with a cross to Kate Freebairn on set

That is such a great set, very simple yet so elegant. Certainly is my favourite set for the news in Adelaide!

[quote=“killy06, post:893, topic:61”]
I wish Brisbane would do something with their set
[/quote] I really don’t get Queensland. They probably have the second largest studio for Ten Eyewitness News, yet they use so little. The old 2012 set needs to be modified so it is not just sitting there useless.

Some caps from tonight’s edition of Ten Eyewitness News Melbourne;

They really need to go HD

Adelaide set looks so much better too

Do they even get used?

they never had them before, so maybe maybe not