For history of Ten affiliates - Capital, NRTV, WIN and Ten North Queensland among others. First, the always metro-quality output produced by the incredible Ten affiliate in Canberra, Ten Capital. As you can see, they were the equal of or better than capital city stations:

There is a documentary that @DJPizarro put together about Ten Capital News in Canberra.

I only lived in Canberra a short time during the late 90s and I recall all the local news services were on at 6pm during this time.

Ten Capital News ran the full hour I think while WIN and Prime then showed the Sydney news from Nine and Seven respectively on delay at 6:30pm.

As a result of this Ten Capital moved Neighbours to 5pm instead of the normal national time of 6:30pm. I can’t recall what they did with the 6pm national program (The Simpsons?). It may have been moved to 5:30pm after Neighbours.

I can’t really find any images of the 1991-1995 “Captial Eyewitness News” opener. The closest I could find was the logo itself from a closer sot in a Canberra Raiders report compilation, which proves that the Ten Evening News branding was used.

I saw it - and taped it - on a trip to Canberra once. Somehow (I cant remember how) someone got a copy of it (I used to send some of my stuff around) and uploaded, like, one second of it. Yes, I don’t understand why. 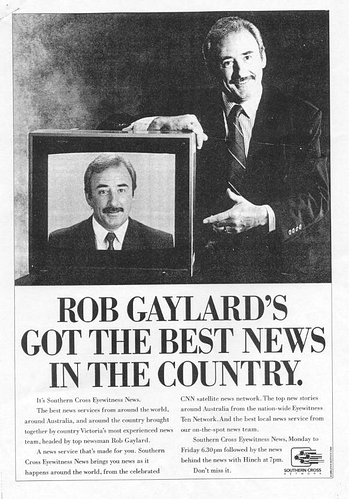 It didn’t have a very long life, seemingly not able to compete with VIC TV’s relay of National Nine News at 6.30 (after the local news) and Prime’s relay of Seven Nightly News at 6.00, so Southern Cross Eyewitness News was soon replaced by a relay of the ATV10 5.00pm news from Melbourne, but when Southern Cross Network became SCN in 1993 they had another go at it, with SCN Eyewitness News at 6.30pm. Not sure who the newsreader was this time around. Again, the attempt was short-lived as was the “SCN” name which was soon (May 1994) to be dumped in favour of a re-branding to Ten and the axing of all local-produced content.

Some things for those who remember the short-lived North Queensland local news bulletins from 2000-2001. Both found in a commercial compilation

Think Gippsland-based Karyn O’Brien did the national news in its second incarnation (there’s an SCN News promo on YouTube somewhere).

When NRTV In coffee/lismore/NNSW switched to ten branding one day.

1 hour live and local from 6 from ten’s coffee Harbour studios. It lasted about 6 months then was axed with competition from nbn and prime

It has its only NRTV look but used the ten logo.

Coffs Harbour to be exact.

Think Gippsland-based Karyn O’Brien did the national news in its second incarnation (there’s an SCN News promo on YouTube somewhere).

A mini-doco I made on Ten Capital News. (I only realised @DJPizarro made one when I was halfway through editing; mine is nowhere near as good as his but it’s still worth a look).

awww, thanks for the nice words. I’ve watched your work mate, keep it up and you’ll have a bright future in the media.

Appreciate it mate, thanks for your support!

An alternative version of Ten Capital News’ “First To Know” jingle, found on a site my brother discovered (I linked it in the description).

Does anyone remember The Workers, that slightly-infamous independently-produced preschool show that aired on Southern Cross Ten around 2011? Would’ve fit much better on an community station. It appears that the show’s YT channel has been slightly more active in the past year, although this doesn’t hint any new content…