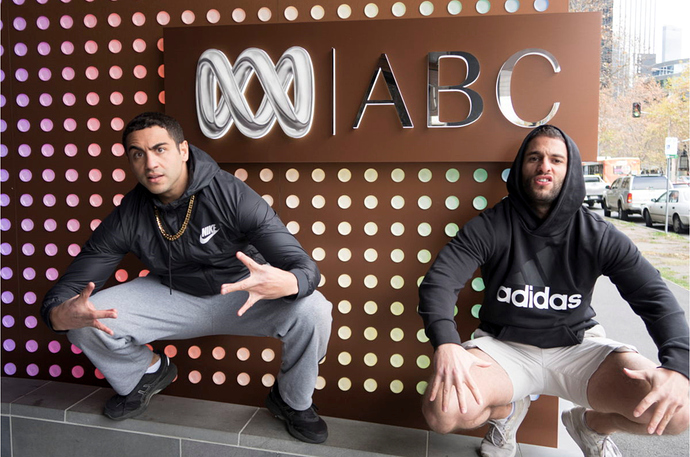 The ABC and Screen Australia are excited to announce that production has commenced this week in Melbourne on Superwog, a new six-part comedy series for ABC COMEDY and YouTube.

Produced by Princess Pictures in association with the ABC, with principal production investment from Screen Australia, and financed with support from Film Victoria and YouTube, the project will forge new ground with episodes released on YouTube, ABC COMEDY and ABC iview – marking a first ever full series collaboration between the ABC and YouTube.

The dual broadcast plan will give Superwog’s huge loyal fanbase more of the show they love both online and on TV, while also exposing a true Aussie comedy success story to a whole new ABC audience. This partnership is yet another example of how the ABC is continually looking for innovative ways to engage with audiences as they shift towards on-demand content, including forming strategic partnerships to bring digital content to wider audiences.

Created by and starring YouTube sensations Theodore and Nathan Saidden, Superwog – the inspired-by-real-life tale of a flawed teenager and his crazed family in heartland suburbia – is also the first original scripted series to air on ABC COMEDY. This commission reaffirms ABC’s commitment to investing both in Australia’s emerging and culturally diverse comedic talents and in original scripted programming. The series also sees the ABC and YouTube embark on a new collaborative partnership.

Developed over eight years by the comedy duo, the Superwog YouTube channel has garnered an extraordinary 180+ million YouTube views and almost 900k subscribers, cementing their spot as Australia’s most watched YouTube comedy stars.

ABC Head of Comedy Rick Kalowski said: “We’re so happy to bring Superwog to ABC, to be in first time business with YouTube, and for this to be our first scripted original for ABC COMEDY. Superwog’s Screen Australia/YouTube Skip Ahead Pilot was one of the funniest half hours I’d ever seen, and the full series is a cracking addition to our unrivalled comedy offering. ABC is serious about comedy, and about working with incredible Australian online comedy talents like Theo and Nathan Saidden to bring them to new audiences here and around the world.”

Sally Caplan, Head of Production at Screen Australia said: “The viral success of Superwog across their YouTube channel, boosted recently by their Skip Ahead pilot is simply staggering. To see them forge forward into this half hour series with YouTube and ABC COMEDY is an incredible opportunity for the Saidden brothers, as well as for both platforms exploring this innovative collaboration and release strategy.”

Head of YouTube Partnerships, Australia and New Zealand, Ed Miles, said: “We are delighted to be supporting Superwog in partnership with Screen Australia and the ABC, as they take this exciting step into creating narrative content. The Australian YouTube creator ecosystem is incredibly strong and it’s fantastic to see the ABC collaborate with creators to tell unique, local stories and embrace a multi-platform strategy to reach and engage audiences on YouTube as well as broadcast TV.”

The Superwog pilot, funded by Screen Australia and Google as part of the Skip Ahead initiative, was the highest trending YouTube video in Australia last year, with over 3.4 million views (90% Australian based) and the most watched piece of content in the country in 2017.

The six by half-hour Superwog series will screen later this year.

Production Credits: The Superwog series is a Superwog and Princess Pictures co-production for the ABC and YouTube. Principal production investment from Screen Australia in association with the ABC. Financed with support from Film Victoria and YouTube. Created and written by Theodore Saidden and Nathan Saidden. Produced by Paul Walton. Directed by Theodore Saidden. ABC Executive Producer Rick Kalowski (with Lauren Merolli).

Hopefully this offends some at News Corp and Sky and gets a bit of free publicity.

Omg I saw these guys on a random ad for a mobile app on Snapchat. wtf.

They’ve been doing theatre shows for years so they already had quite a following.

They’ve been BIG on Youtube for ages! Good on em. Ive followed them for a long time now so this is great.

I’m thrilled for this. Been a long time follower of their YouTube channel.

Good to see albeit buried on a multichannel. It’s not like the main channel is bursting with high rating content.

Even if they ran it late, it should get a run on the ABC first.

oh yeah for those who haven’t seen the pilot

EXCUSE ME, DO YOU HAVE A DOUGHNUT FOR MY BUM?

I did chuckle all the way through that video. They are very talented.

ABC COMEDY’s partnership with YouTube highlights both the channel’s and ABC’s commitment to strategic partnerships that bring digital content to wider audiences. The dual broadcast plan will give Superwog’s huge loyal fanbase more of the show they love both online and on TV, while also exposing a true Aussie comedy success story to a whole new ABC audience.

Created, written by and starring brothers Theodore and Nathan Saidden, the six-part series continues on from the hugely successful The Superwog pilot, which was the highest trending YouTube video in Australia last year, with in excess of 3.7 million views (90% Australian based).

Edgy, irreverent and hilarious, Superwog promises its millions of online fans more of what they love… and TV audiences an experience they’ve never had before on ABC.

For a first look at this cracking addition to ABC COMEDY’s unrivalled offerings, click here

Superwog is a Princess Pictures and Superwog production for YouTube and the ABC with principal production investment from Screen Australia in association with the ABC, and financed with support from Film Victoria and YouTube Series. Producer Amanda Reedy. Executive Producers Emma Fitzsimons and Elia Eliades. Created, written, co-produced by and starring Theodore Saidden and Nathan Saidden. Produced by Paul Walton. Directed by Theodore Saidden. ABC Executive Producers Rick Kalowski and Lauren Merolli.

Superwog screens Sundays at 6pm on the Superwog YouTube channel from Sunday October 7, then Tuesdays at 9.30pm on ABC COMEDY and iview from Tuesday October 9.

Why don’t they screen it on the ABC first and ABC Comedy soon after?

From Tuesday 9 October at 9.30pm on ABC Comedy

Exactly, I don’t think the ABC realised how big SuperWog is and how worldwide their cult following is.

Why don’t they screen it on the ABC first and ABC Comedy soon after?

Maybe they thought it would be a better fit on the Comedy channel. The ABC evening lineup has seemed to have become more serious after Comedy launched.

With all the cutbacks at the ABC, I feel like they shouldn’t waste any content and give everything a run on ABC first.

Did any watch episode 1 via You Tube? - it was posted yesterday; with the episode available on ABC Comedy Tuesday.