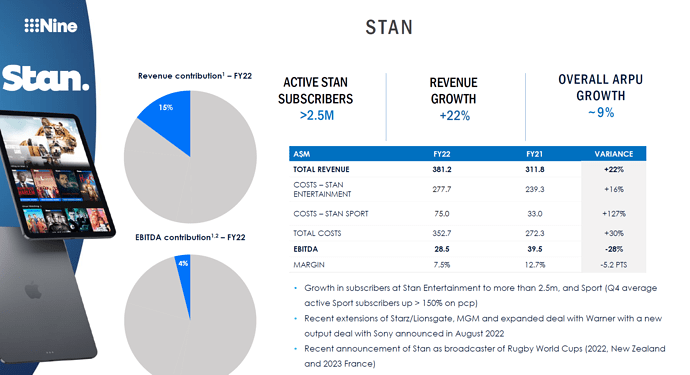 @StanAustralia
All will be revealed. The brand new season of Yellowstone is coming November 14 in an unmissable two-hour premiere event, only on Stan. #Yellowstone https://t.co/ywTL9Wmfks
JohnsonTV August 29, 2022, 10:58pm #967 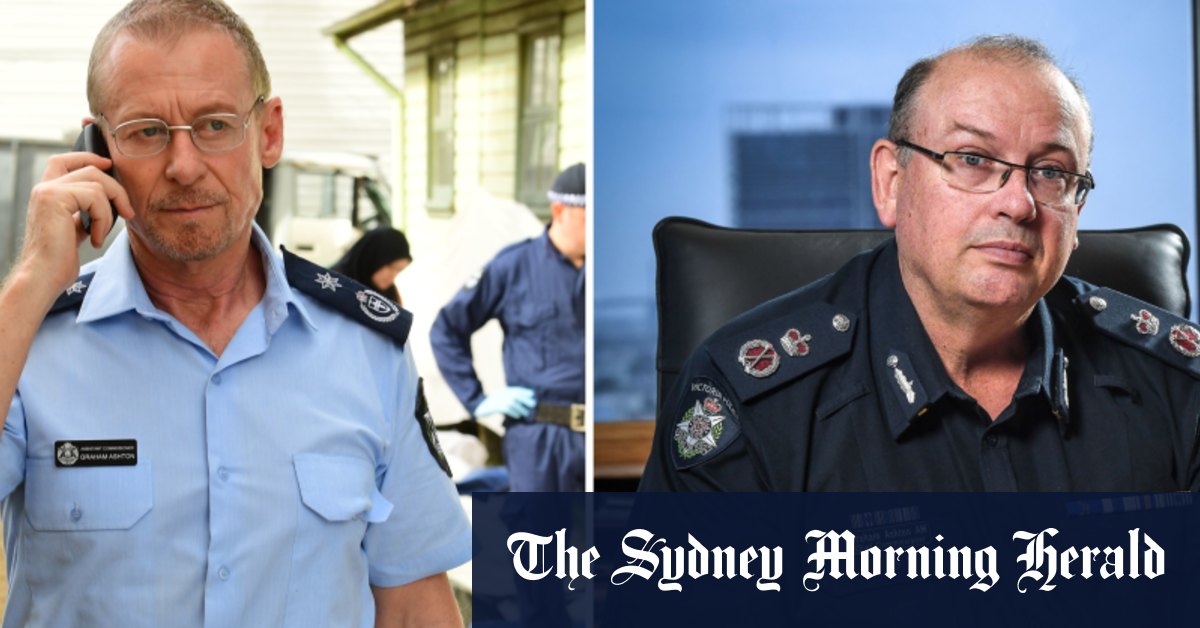 The price quietly went up recently:

I’ve gone back to the SD plan.

Has there been any increase to Stan Sport?

me too, $16 is too exxy especially with multiple subscriptions. I’ve put Netflix, Stan and Binge to SD plans for the time being.

The price quietly went up recently

Has there been any increase to Stan Sport?

No, the $10 monthly cost to Stan Sport stays the same.

So Stan SD is cheaper than Netflix SD by a dollar.

Shooter Seasons 1-3 coming to Stan on September the 14th … was previously on Netfix.

Danielle Laidley documents Laidley’s life so far, from her career as a high-profile football player and coach to her battles with drug addiction and gender dysphoria. She speaks to the courage enabled by Donna, a lifelong friend turned supportive partner, and the ongoing impact of Victoria Police’s actions that outed her transgender status to the world. Viewers will see Dani and Donna navigate their paths forward in a critical twelve months under public scrutiny. Dani will launch her autobiography, approach the AFL to put her voice toward inclusivity, strive to rebuild family relationships and work to find her place in the community as an LGBTIQ+ representative.

Emmy® award-nominated Michael Ware (Only the Dead) directs The Cape, a haunting documentary about the mysterious tragedies befalling an isolated community in Australia’s Cape York. When a ten-year-old boy and his father vanish while checking their shark nets, it unravels a dynastic alliance between mighty fishing clans. A mother and son are accused of murder and a love triangle gone horribly wrong raises questions of guilt and complicity that ripple out far beyond the alleged killers.

In collaboration with Walkey Award-winning journalist Carrie Fellner and The Sydney Morning Herald, Safe to Drink investigates toxic chemicals that have sparked an international health and environmental catastrophe and tells the story of the devastating impacts on contaminated communities who are fighting for justice, both in Australia and across the world. Produced and directed by Janine Hosking (The Eulogy), Katrina McGowan (The Eulogy) and Mat Cornwell.

Finally, Gracie Otto directs a feature-length documentary about her father, Australian icon Barry Otto, in Otto on Otto. With a career in Australian theatre, film and television that has spanned more than 50 years, Barry Otto is a national treasure – a creative, endearing and eccentric personality who embraces the serious and the silly. In Revealed: Otto on Otto, Gracie reflects on her relationship with her father in the twilight of his career and his life, as she tries to capture his memories before they disappear. Poignant and passionate, Revealed: Otto on Otto will leave the audience with a rare insight into a true artist.

Stan Chief Content Officer Cailah Scobie said: “Guaranteed to enlighten and spark debate, these four brand-new Stan Original Documentaries will make powerful additions to our growing Revealed lineup. From intimate portraits of trailblazers Danielle Laidley and Barry Otto, to a detailed examination of a global health disaster and the unravelling of two shocking disappearances in Cape York, these uniquely Australian stories come from an outstanding collection of journalists, directors and producers. We can’t wait to share these stories on Stan next year.”

Screen Australia’s Head of Documentary Alex West said: “We are proud to support these filmmakers who have demonstrated immense expertise in crafting bold investigations and intimate human portraits, exploring equality and identity in our society. I’m confident these insightful documentaries will inspire reflection and help spark change, and I can’t wait to see them premiere on Stan next year.”

Head of Screen NSW Kyas Hepworth said: “Screen NSW is thrilled to partner with Stan on its Revealed documentary slate that will support our talented NSW documentary filmmakers. Screen NSW supported Revealed: Otto on Otto, an intimate family portrait of icon Barry Otto, Revealed: Safe to Drink from leading Australian filmmaker Janine Hosking, and Revealed: The Cape, which will examine an isolated community reeling from tragedy. I look forward to seeing all the original documentaries on Stan in 2023.”

Mandy Chang, Global Head of Documentaries at Fremantle, who is partnering on Danielle Laidley and The Cape said: “Fremantle is so excited to be partnering with Stan on these thought provoking and remarkable Australian stories. It is our pleasure to be working alongside the exceptionally talented filmmaking teams behind both projects, whom I know and admire very much.”

Revealed continues later this year with Revealed: Reefshot, an urgent call to action on the state of the Great Barrier Reef. 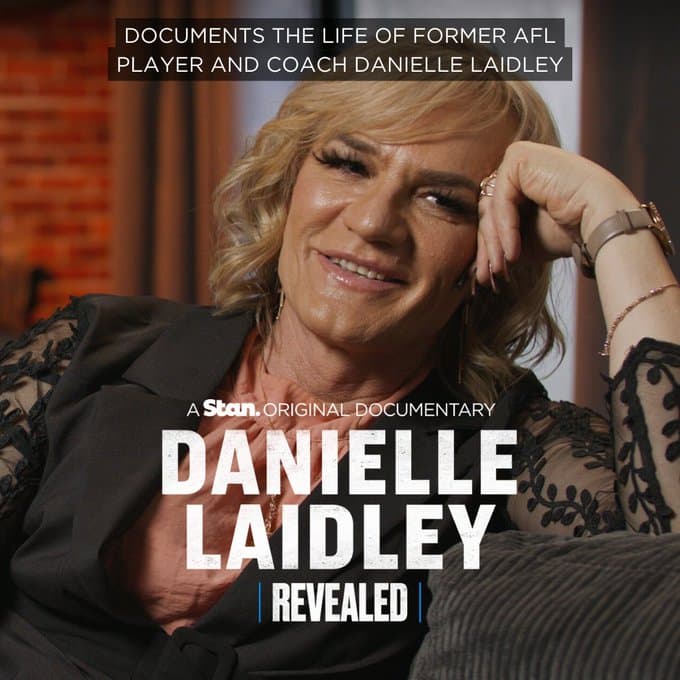 Using never-before-seen archival materials, it charts Dani’s early childhood in a working-class Perth suburb through her career in Australian football. For the first time, Dani dives deep into her battles with identity, drugs, the media, Victoria Police, and subsequent court investigations. Danielle Laidley exposes Laidley’s new life with partner Donna and their journey to forge Dani’s new public image, as they work to break down barriers in our culture as well as their personal lives.

Principal production funding from Screen Australia in association with VicScreen. 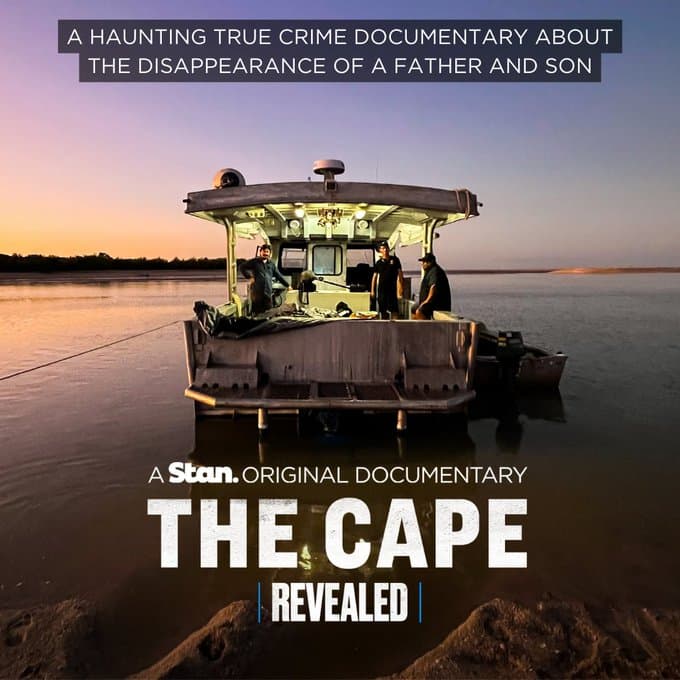 The Cape is an intimate portrayal of an isolated community forever changed by tragedy.

In the vast, little-understood wilderness of Australia’s Cape York, fortune-hunters hide amongst the mangroves and the crocs, seeking to bend the ancient laws of nature to their will. When a ten-year-old boy and his father vanish while checking their shark nets, it unravels a dynastic alliance between mighty fishing clans. A mother and son are accused of murder and a love triangle gone horribly wrong raises questions of guilt and complicity that ripple out far beyond the alleged killers.

Directed by fearless storyteller Michael Ware and written by Justine Rosenthal, The Cape is a living, haunting mystery. Produced by Richard Finlayson (Waltzing the Dragon with Benjamin Law) and Jude Troy (All this Mayhem) of Wooden Horse (The Clearing, The Stuff the British Stole), the documentary is captured by Torres Strait-born cinematographer Murray Lui (Stan Original Series Black Snow, Top End Wedding). Edited by Karryn de Cinque (High Ground, Slim and I). 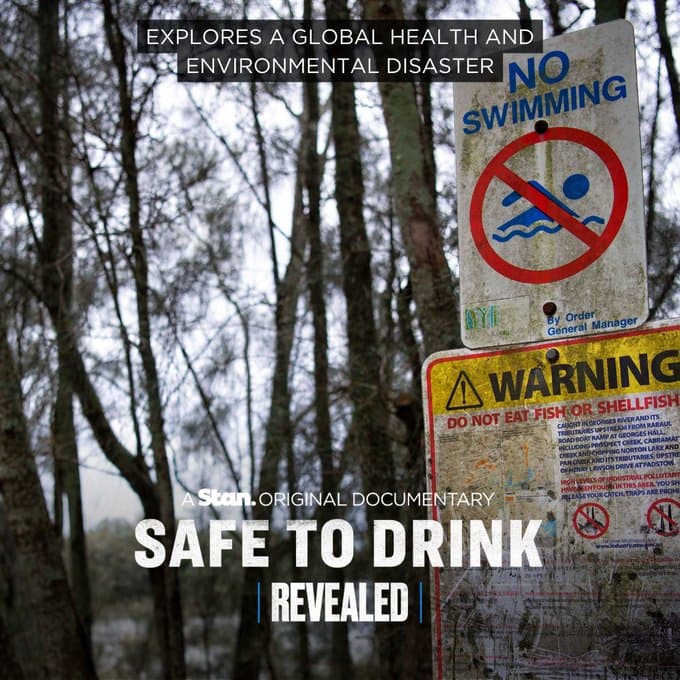 Revealed: Safe to Drink investigates toxic chemicals that have sparked an international health and environmental catastrophe and tells the story of the devastating impacts on contaminated communities who are fighting for justice, both in Australia and across the world.

Revealed: Safe to Drink is in collaboration with Walkey Award-winning journalist Carrie Fellner and The Sydney Morning Herald, and is produced and directed by Janine Hosking (The Eulogy), Katrina McGowan (The Eulogy) and Mat Cornwell with iKandy Films and Gari Yala Films and produced in association with Shark Island Foundation. 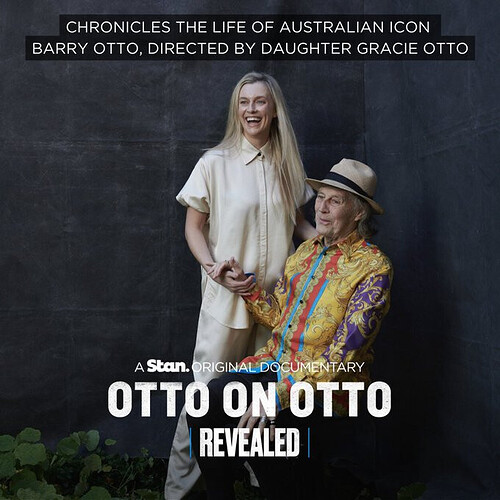 Inspired to make an intimate family portrait, Gracie Otto directs this feature-length documentary about her father, Barry Otto, whose career in Australian theatre, film and television has spanned more than 50 years.

Revealed: Otto on Otto is about Gracie’s relationship with her father in the twilight of his career and his life, as she tries to capture his memories before they disappear. The film takes audiences on a journey through Barry’s life, from his formative years growing up in Brisbane and his various roles throughout his career, to his quieter years surrounded by art, poetry and his cat Bogart.

Utilising archival footage and voiceovers, the film delves deep into Barry’s broad repertoire of work. Featuring interviews with Barry’s collaborators, Revealed: Otto on Otto takes audiences on a journey through Australia’s theatre industry in the 70s and 80s.

Produced by Nicole O’Donohue and Cody Greenwood, the documentary is not just a cinematic reflection of Barry’s life – it is a fun, hilarious and heartbreaking film with just a touch of fashion and madness. 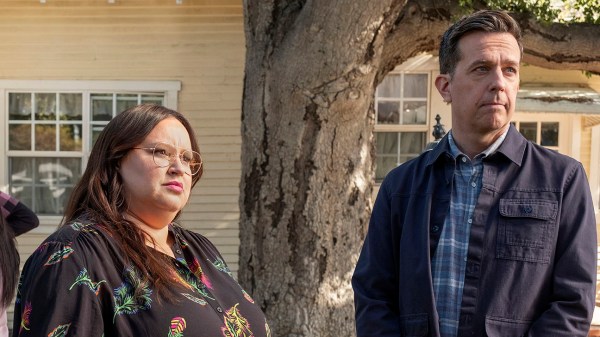 The comedy, which ran for two seasons, marked a breakthrough for Native representation onscreen and in the writers' room.

@StanAustralia
Deck the halls because Matt Okine and Miranda Tapsell are set to star in The Stan Original Film Christmas Ransom, coming soon, only on Stan. 🎄🌟#ChristmasRansom #StanOriginals https://t.co/PaU6Ps3xQB 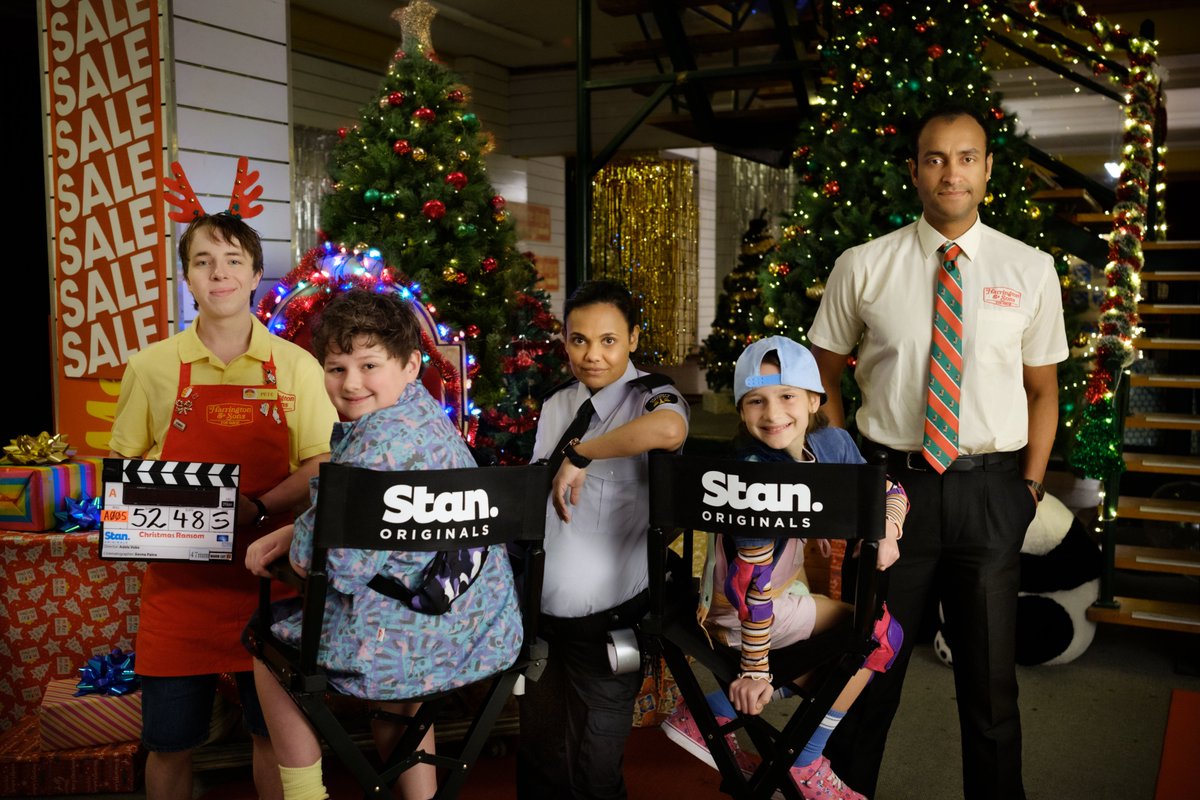 The new reality series﻿ is a modern take on the struggle for love in the difficult and fast-paced modern dating world, and comes from the producers behind Married At First Sight.

The first two episodes will premiere on 6 October with new episodes to follow weekly, only on Stan.

Love Triangle challenges a group of singles to relinquish their grasp on what they think their perfect partner should look like, and instead choose someone, sight unseen, based on a deeper connection.

They will be able to text and call their potential matches as they get to know each other, but they, along with the audience, won’t discover what the other looks like until they make their choice, and go on their first blind date.

Everything hangs on this decision – will they like what they see when they first meet? And if they don’t, can they overcome a lack of attraction, to form a genuine connection.

It’s after these first dates that things will really fire up when the newly formed couples move in together for a highly unpredictable and explosive relationship journey filled with love, heartbreak and a mind-blowing twist that will rock the couples to their core.

“Love Triangle represents a thrilling new step for Stan as we continue to ramp up our Stan Originals output, leveraging the proven pedigree of the 9Network and the extraordinary makers of Married at First Sight to deliver a sensational new dating format. This is going to be an unmissable reality television event,” Stan chief content officer Cailah Scobie said.

“We are incredibly proud to produce the addictive new relationship series, Love Triangle, for Stan. Tackling the difficulties of modern dating, the series features incredible characters on the journey to find long lasting love but with a mind-blowing mid-season twist. All we can say is, remember that a triangle has three sides!” Endemol Shine Australia Chief executive officer Peter Newman said.

The Stan Original dating series Love Triangle is produced by Endemol Shine Australia (a Banijay company) in conjunction with 9Network.

The first two episodes of the Stan Original dating series Love Triangle will premiere 6 October, only on Stan. 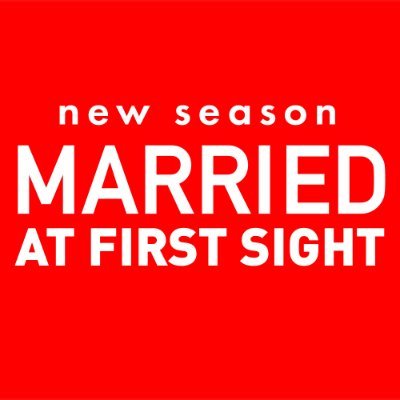 @MarriedAU
From the producers of #MAFS comes your next reality addiction! The Stan Original Dating Series Love Triangle is coming October 6, only on @StanAustralia. #LoveTriangleOnStan #StanOriginals https://t.co/Q6EYLtTFWu
TV_Addict September 13, 2022, 12:22am #978

comes from the producers behind Married At First Sight.

In that case I’ll pass. 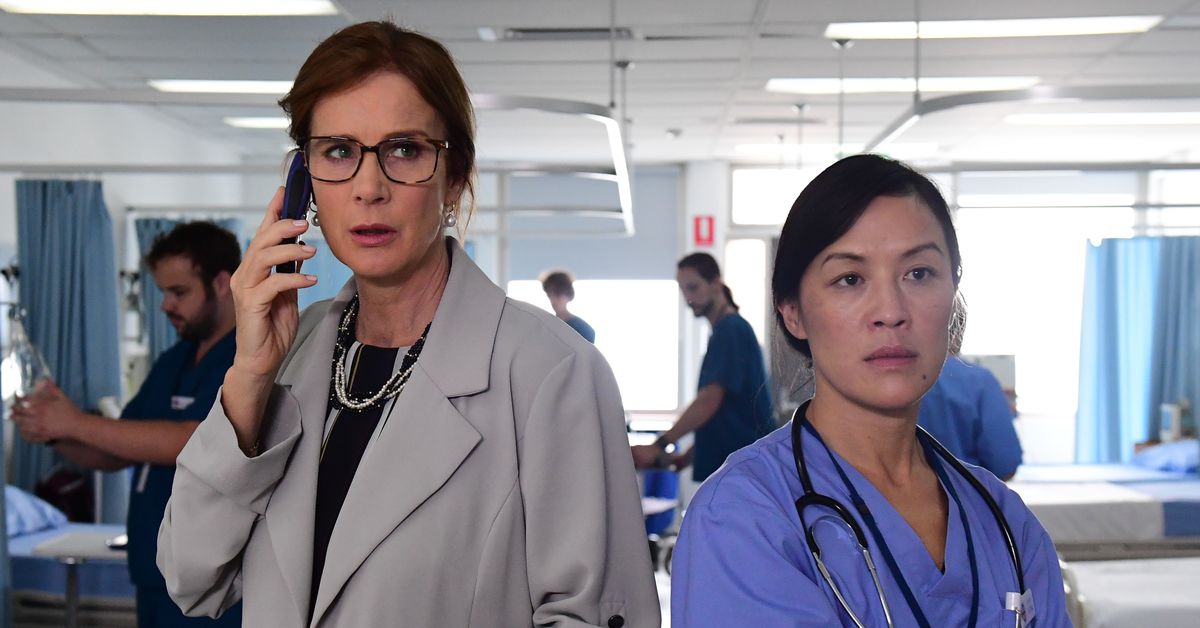 Next month is the 20th anniversary of the horrific bombings in the tourist district of Kuta on the Indonesian island of Bali. The attack killed 202 people (including 88 Australians, 38 Indonesians, 23 Britons, and people of more than 20 other nationalities). A further 209 people were injured.

The four-part drama series will premiere Sunday 25 September, with all episodes available at once, only on Stan. 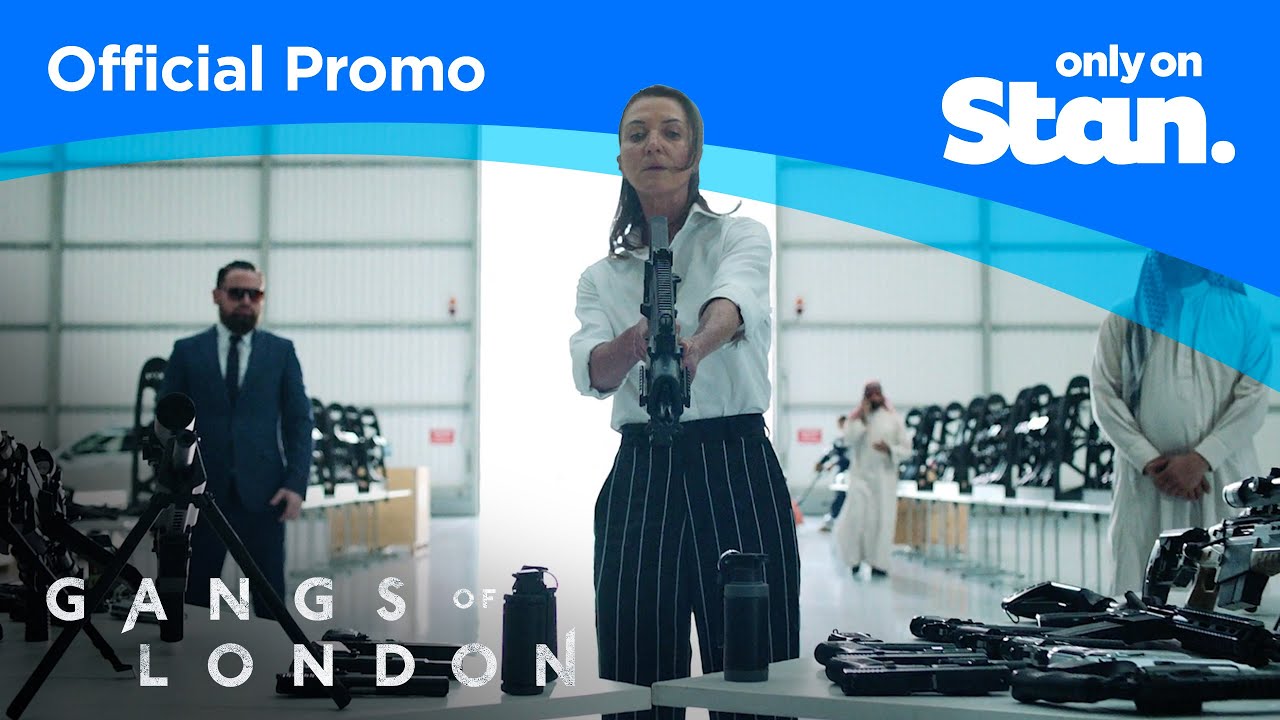 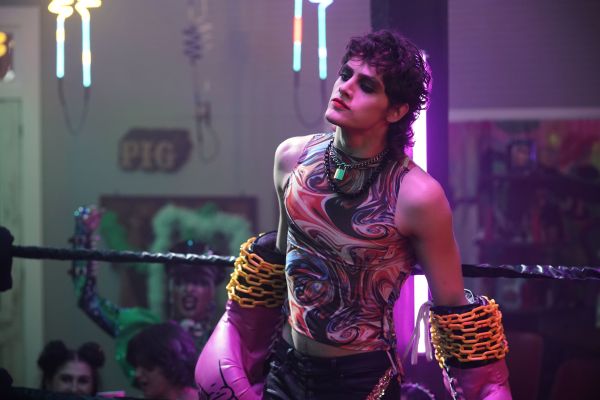 ‘Queer As Folk’ Canceled By Peacock After One Season

The Queer As Folk reboot will be short-lived. Peacock has opted not to pick up a second season of the series created by Russell T. Davies and Stephen Dunn. A reimagining of the British series creat…

I quite enjoyed it, shame there won’t be more.

Not surprised, compared to the English original and the American remake, this was woeful!

That’s a real shame. I thought it was really good.