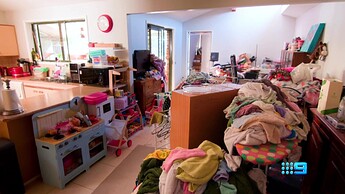 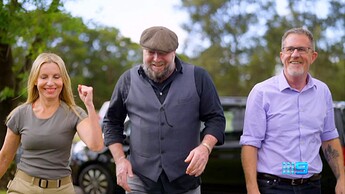 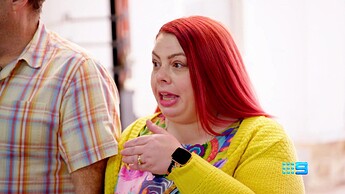 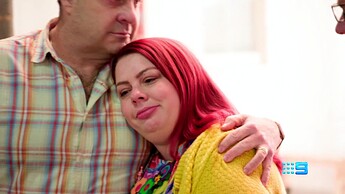 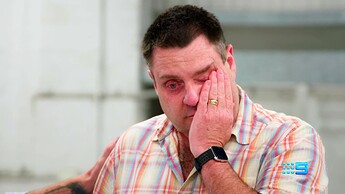 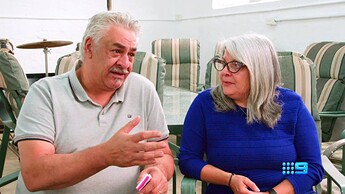 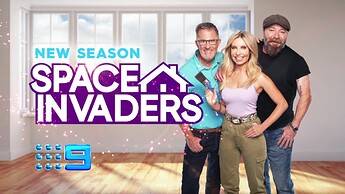 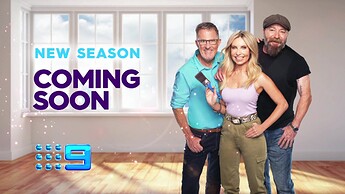 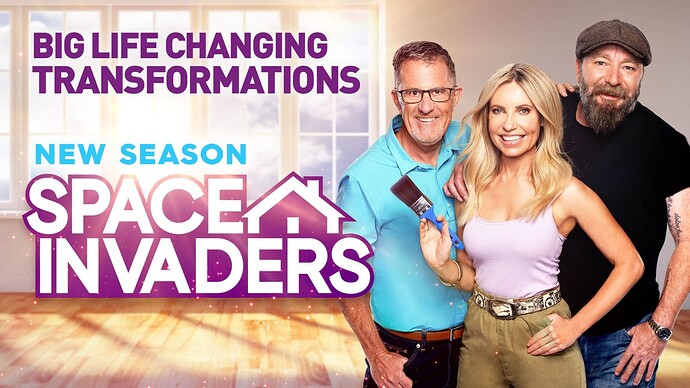 Battling a clutter crisis? Overwhelmed and unable to part with the tiniest possessions even though your rooms are full to the brim? Anxious about your kitchen cupboard and want a change but don’t know where to start? Enter the Space Invaders who are here to help.

Join Space Invaders , as declutter guru Peter Walsh , renovation queen Cherie Barber and treasure hunter Lucas Callaghan unite to help desperate families declutter not only their homes, but their emotions too. Our Space Invaders are on a mission to tackle the overwhelming number of items that have been accumulated by these folks and are now holding them back from living a happier life.

Each week the Space Invaders will transform the homes and lives of those who for whatever reason have found themselves drowning in mess and clutter.

For more than 20 years, Peter Walsh has been helping families across Australia and America get themselves decluttered and organized. In fact, Peter started his television career on the very first organizing show in the US. From there, he spent the next 5 years as Oprah Winfrey’s organizing pro with bimonthly appearances on her television series followed by two different series of his own on her US television network. Peter then joined The Rachael Ray Show as her “organizing buddy”. He’s been with that series for the past 9 years.

Realizing that Peter’s approach to organization concentrates on understanding what holds us back from being organized, Oprah dubbed Peter “The Get Your Whole Life Organized Guy”. At its core, Peter believes that clutter is ‘anything that gets in the way of the life you want to be living’. He’s far more interested in helping people get their lives back on track than he is in helping them colour coordinate their clothes.

As a result, Peter has written seven books on getting organized. He’s appeared on numerous television programs throughout the world, been interviewed widely by print publications, and has also hosted his own weekly radio program on Oprah’s satellite radio service.

Peter grew up as part of a large family in country Victoria and has a degree in Educational Psychology. It’s this combination of life experiences which has formed his approach to organization. He’s thrilled to be home in Australia making SPACE INVADERS – where he is hopefully helping people realize the amazing benefits of clearing out the clutter and taking control back of their homes. 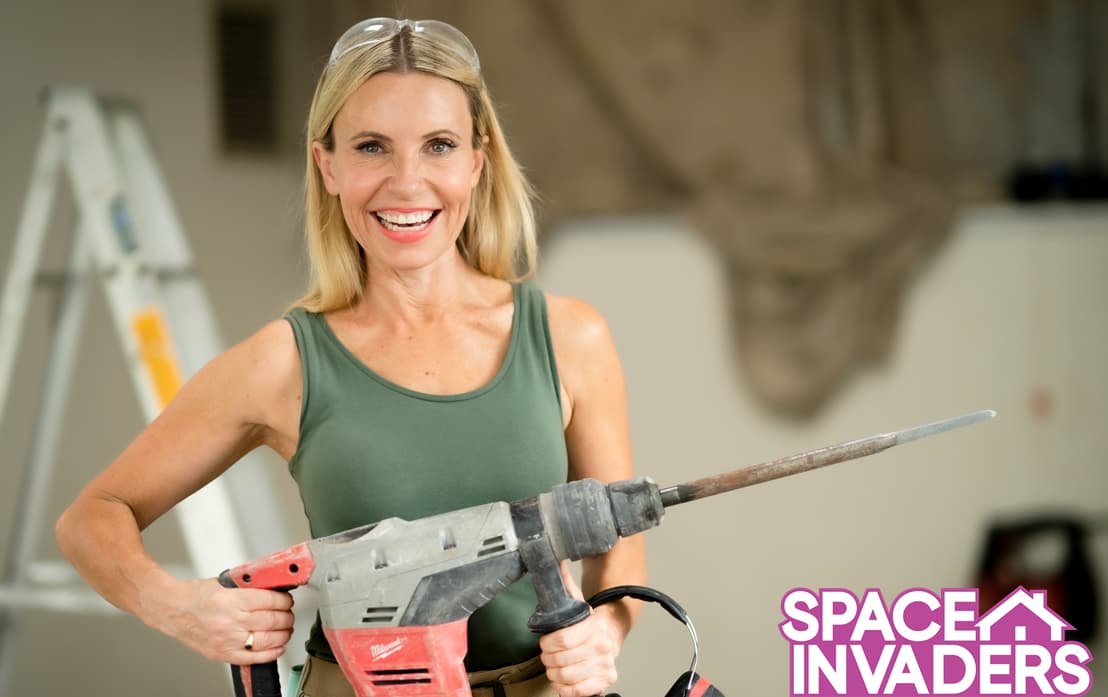 Cherie Barber is Australia’s Renovation Queen, a regular TV renovator, having appeared on every Australian network in shows such as Space Invaders , Today Extra , The Living Room & Your Money Live . She is a highly sought after public speaker, author, award winning business woman & the star of her own TV show in the United States of America called 5 Day Flip .

At the age of 21, Cherie embarked on a minor renovation and cosmetically flipped her first property, making a profit in the process that sparked her interest in property. She bought another unrenovated house straight after, and as they say, the rest is history. Almost 30 years later, she’s now personally renovated well in excess of 130 properties.

In addition to her significant renovation achievements, Cherie is the CEO of Renovating For Profit & has been a finalist twice in the Telstra Business Woman of the Year Awards. In 2016, Cherie was named as one of the Top 100 Women of Influence in Australia.

Lucas Callaghan is a colourful TV personality and one of Australia’s foremost collectors of 20th century design.

Lucas has starred in two TV series, Aussie Pickers and more recently created and hosted Road to Riches both for Foxtel’s A & E. Later this year he will appear in a new Prime Time program for free to air Network TV. All these programs follow Lucas as he searches attics, backyards and sheds in the search for forgotten relics, turning them in to cash whilst meeting colourful characters and learning a bit of history along the way.

Lucas’s passion for vintage items started when he was 7 years old when he watched someone pay $5000 for a chair. This got him hungry to find another one and so began his four -decade love affair with collecting, restoring and selling antiques.

Lucas has owned several vintage retails stores around Sydney, he then opened The Loading Dock Bar & Cafe and warehouse vintage retail store in Chippendale. In 2011 he moved the store to an 1880’s corner store in Paddington NSW, which is now the home to Modern2Vintage his 20th-century antiques shop.

Apart from the thrill of hunting down rare collectables Lucas loves repurposing old items and giving items a second life, which is a large part of his ethos of restoring, repurposing, recycling and reusing items for profit.

Lucas started his career in the art departments of TV, advertising and film. He has styled and decorated many restaurants, nightclubs and bars including The Forest Lodge Hotel, The Kings Cross Hotel and Riley St Garage and recently he designed a museum for Coke at Westfield Mt Druitt, created with unique items from Australia’s past.

When he’s not at his shop, Lucas can be found on touring around the Australian countryside on his custom-built Triumph bike. 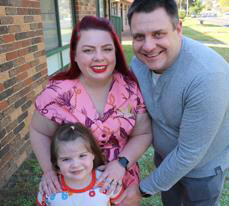 Lisa and Jason live in a severely cluttered house with their young daughter, Willow. Lisa puts everyone else first which has resulted in her family coming last. She cared for her mother and grandmother as they battled cancer and has found no time to manage the growing clutter in her own home. Over the years the clutter has built up to such a degree that it impacts her physical and mental health. It was only recently though when Willow asked Lisa for a clean house as a birthday gift that the reality of the situation broke Lisa and she knew she needed a major life change.

Four truckloads of boxes are transported to the warehouse where Lisa and Jason will be faced with one of the biggest challenges of their lives to reduce the amount of clutter by at least 80% and confront their bad habits. Lucas is stumbles across valuable trinkets to share with the family while Cherie transforms their home into a retro space they’ve always dreamed of.

WTFN decluttering series gets Euro broadcasters on board, including some with format rights. @Channel9
Drowning in clutter?#SpaceInvadersTV is back for a brand new season and are looking for struggling Aussies to embark on a life-changing journey! Apply now: 9Soci.al/iizp50JEhUK
← previous page
Get Connected: Like us on Facebook | Follow us on Twitter