It’s interesting that the Super Bowl will be on main channel rather than 7mate.

Not really when you consider each day’s Olympics action doesn’t begin until 12pm AEDT. As such, it makes more sense for Seven to go from Sunrise to the Super Bowl and then into live Olympics coverage straight after (like NBC are doing) rather than air highlights of the previous day’s action for the first two hours.

They schedule this to 4pm every year but if there’s no overtime it’s usually out at 2pm or 2:30. Given NBC will want to hold the Super Bowl audience in to the Olympics, I expect NBC will keep post-game to minimum contractual obligations.

Does anyone know who will perform for the halftime show?

Does anyone know who will perform for the halftime show?

The Cincinnati Bengals and Los Angeles Rams will headline an action-packed day of sport on the Seven Network when the biggest sporting event in America, the Super Bowl LVI, is broadcast live and free on Channel 7 and 7plus next Monday 14 February from 10.00am AEDT.

From the NFL in Los Angeles to the slopes in Beijing, Seven’s sport schedule will be jam-packed when the Aussies go for gold on Day 10 of the Olympic Winter Games, following an epic Super Bowl LVI, including the highly anticipated Pepsi Super Bowl LVI Halftime Show headlined by Kendrick Lamar, Dr. Dre, Snoop Dogg, Mary J. Blige and Eminem.

The NFL action will kick off from 9.30am AEDT with a special Super Bowl Edition of Seven’s NFL Armchair Experts , featuring former Arizona Cardinals punter and Geelong AFL star Ben Graham and host Cam Luke on the ground in Los Angeles before the main event at 10.00am AEDT.

Managing Director Seven Melbourne and Head of Network Sport, Lewis Martin said: “As the free-to-air home of the NFL and Australia’s Home of the Olympics, we’re thrilled to deliver such an exciting day of back-to-back live sport coverage on Seven.

“Seven’s comprehensive live and free coverage will take viewers inside the action of the current and past NFL seasons, along with exclusive digital content that brings the very best of this incredible sport to fans across Australia.

“Australians have wholeheartedly embraced the Olympic Winter Games coverage on Seven and we cannot wait to see what our talent-stacked team of athletes has in store when they hit the slopes for the Aerials, Monobob and Big Air Finals on a mega Monday of live sport.” 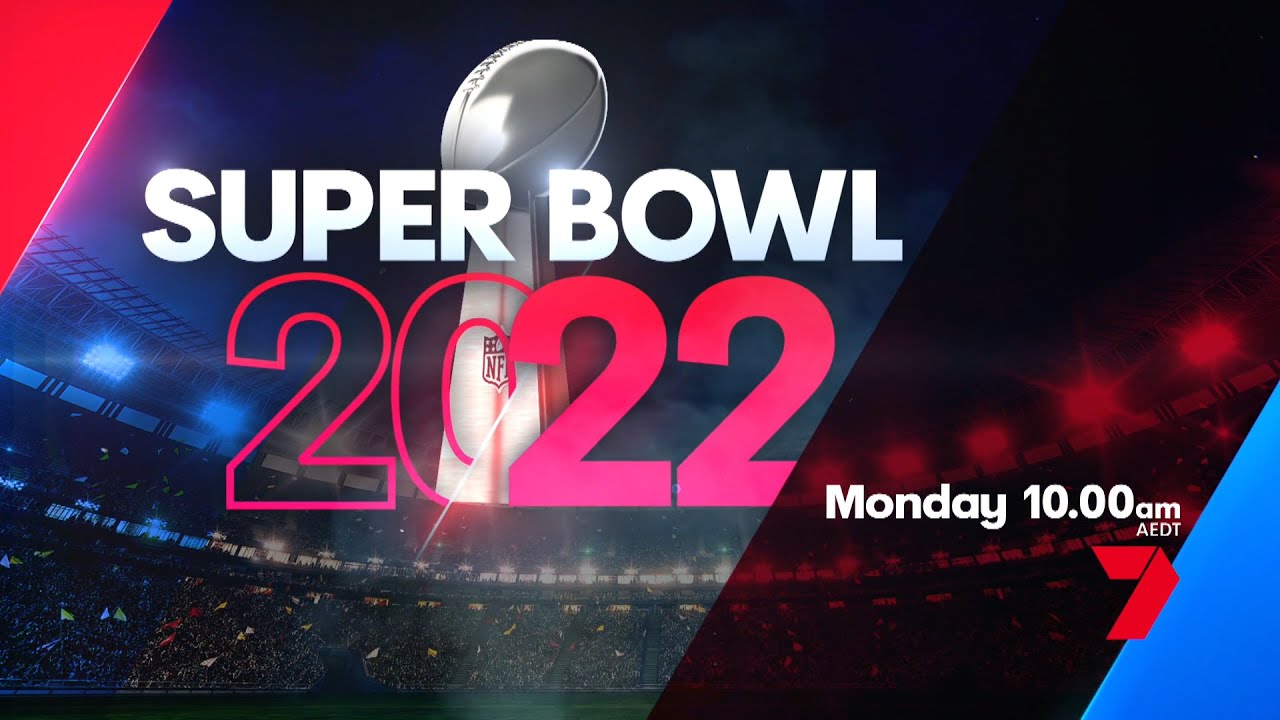 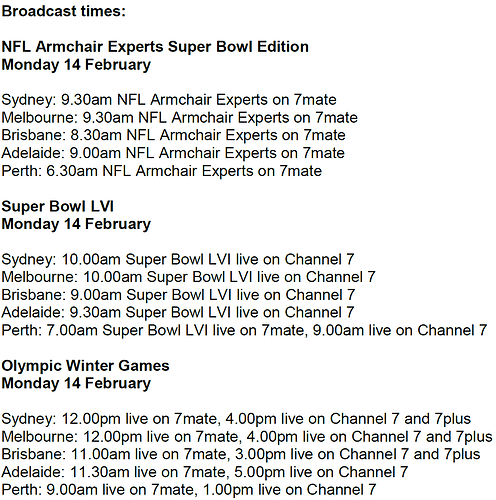 If that is the case, then Seven has allocated too much time for its Super Bowl coverage (currently scheduled until 4pm AEDT). I think it will finish at around 2.30pm AEDT before Seven’s Winter Olympics broadcast is transferred from 7mate to main channel.

It’s nothing new - Seven always overschedules the Super Bowl as if it’ll go to a ridiculously stupid number of overtime periods.

If Seven’s schedule plays out, they’ll be telling Sydney and Melbourne on 7mate to change to Channel 7 at 4pm, only to be doing the reverse one hour later at 5pm for The Chase. Seems an unnecessarily convoluted way of going about it. Same for NFL pre show on 7mate while Sunrise goes extended again to 10am, before Super Bowl takes over.

NFL? Also, Armchair experts isn’t really a pre-show, it’s a show that not many people watch anyway. Going from Sunrise into the NBC Super Bowl production is better.

It was a typo, sorry!

Seems like the Super Bowl has finished well ahead of Seven’s preliminary schedule. Live Olympic coverage from 7Mate is beckoning.

NBC was about to leave the coverage soon as well. 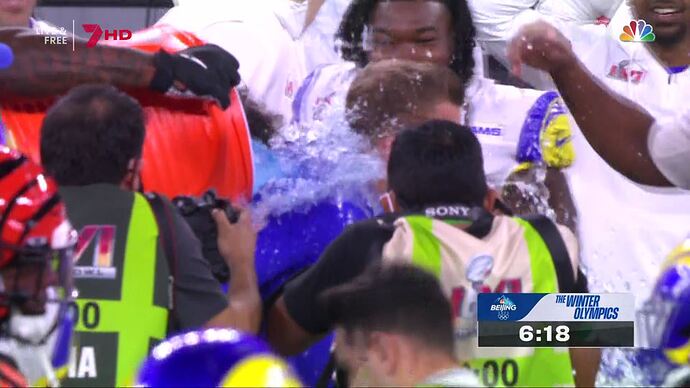 After the Olympics appeared on the main channel they stayed on 7Mate so simulcast atm.

Figure Skating on NBC and Bobsleigh on 7

Super Bowl soars on Seven and 7plus

The Seven Network’s live and free coverage of Super Bowl LVI was a hit with fans, reaching 1.87 million people nationally on Monday and recording its biggest television audience since 2016.

Seven’s full coverage of the Los Angeles Rams’ 23-20 victory over the Cincinnati Bengals recorded an average total audience of 583,000 nationally, including 49,000 viewers on 7plus.

The Super Bowl streamed more live minutes than any other program yesterday with 7plus recording a 58% commercial share in live streaming on Monday. 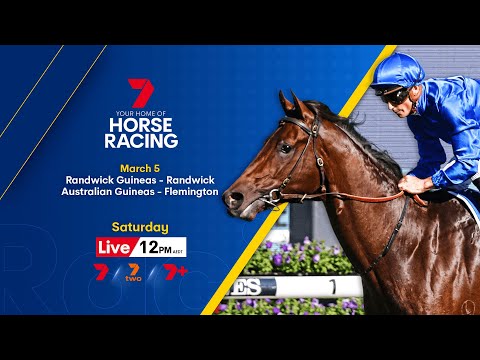 Group 1 stars set to shine on Seven and 7plus

Some of Australian racing’s most coveted prizes go on the line over the coming weeks as the Autumn Racing Carnival heats up on the Seven Network, including the $5 million All-Star Mile at Flemington and the 66th running of the $5 million Golden Slipper Stakes at Rosehill Gardens.

The Autumn Racing Carnival kicks up a gear tomorrow with a huge day of thoroughbred racing from Randwick Guineas Day and Australian Guineas Day at Flemington, including three Group 1 races live and free from 12pm AEDT on Seven and 7plus.

Over the next 11 Saturdays, fans will enjoy the very best racing from the Sydney and Melbourne Autumn Carnivals live and free on Seven and 7plus, with the highlights including:

“Autumn racing has provided so many incredible highlights in recent years – who can forget Winx’s spectacular 2019 retirement? This year all eyes will be on Verry Elleegant. If everything goes right for her, expectations are she’ll run in Europe at the prestigious Prix de l’Arc de Triomphe.

“The Championships have provided the spice to the autumn that we’ve historically experienced in spring racing here in Australia. The $4 million Queen Elizabeth Stakes will decide our horse of the year, and there are a number of key contenders seeking the crown.

“For the first time on the same day, we have the world’s richest two-year-old race, and the Golden Slipper and All-Star Mile are both now worth $5 million. It’s going to be spine tingling.”

Managing Director Seven Melbourne and Head of Network Sport, Lewis Martin, said: “This Autumn, Seven will bring fans a spectacular feast of thoroughbred racing, elegance and fashion from Sydney and Melbourne, with the live and free coverage once again fronted by racing’s best commentary team led by the peerless Bruce McAvaney.

“Across the next 11 Saturdays, there’s no other place racing fans will want to be than right here on Seven, Your Home of Racing.” 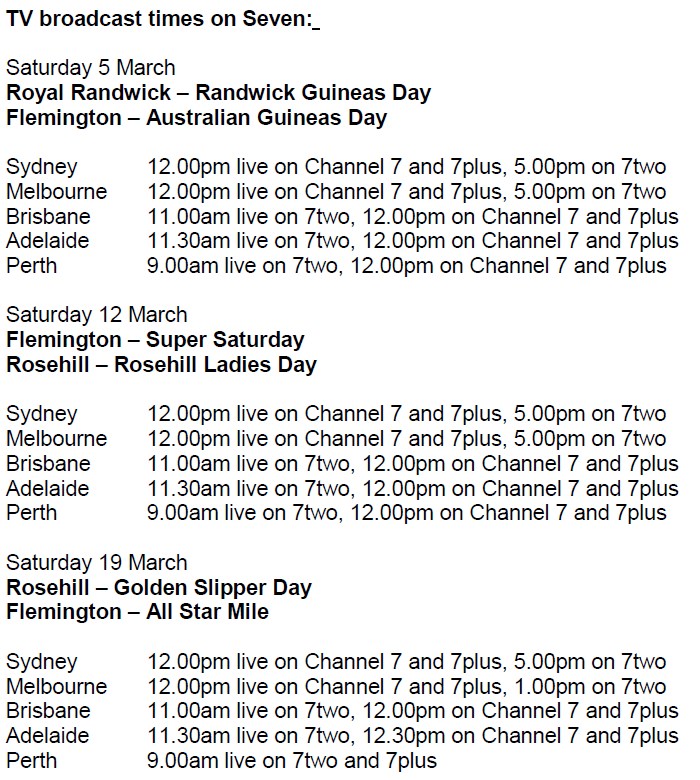 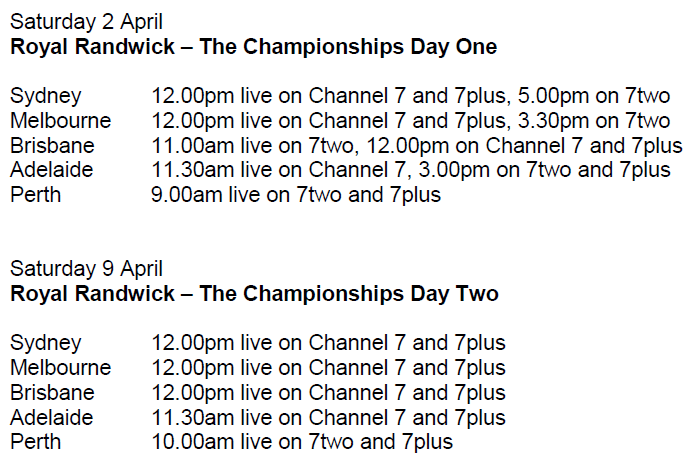 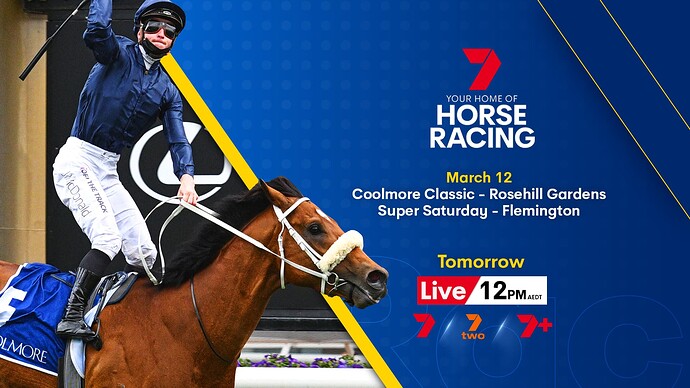 One of the most influential voices in racing, Jelfs brings with her an exceptional knowledge and passion for thoroughbred racing. She joins Australia’s #1 racing team led by pre-eminent sports broadcaster Bruce McAvaney alongside, Jason Richardson, Emma Freedman, Katelyn Mallyon, and Kate Waterhouse.

Popular segment, Lizzie Likes, will be a mainstay during Seven’s racing coverage throughout the year, as Jelfs dissects form, track conditions and selections from the mounting yard.

Jelfs said: “I’m delighted to be joining Australia’s best racing team at Seven and can’t wait to get back to the track tomorrow to broadcast one of the premier days on the Autumn racing calendar.

“It’s an absolute thrill to work alongside an incomparable sports broadcaster in Bruce McAvaney, as well as the broader Seven team.”

Managing Director Seven Melbourne and Head of Network Sport, Lewis Martin, said: “Lizzie is already a familiar face and respected voice to Seven’s racing viewers, and we are thrilled to have her join the team full time in 2022.

“When Lizzie talks, pundits and punters listen. She has a rare and thorough understanding of racing and her impressive knowledge and insights will only strengthen Seven’s already outstanding racing team.”

Some of Australian racing’s most coveted prizes go on the line over the next 10 Saturdays as the Autumn Racing Carnival heats up on Seven, including the $5 million All-Star Mile at Flemington and the 66th running of the $5 million Golden Slipper Stakes at Rosehill Gardens.

Fans will enjoy the very best racing from the Sydney and Melbourne Autumn Carnivals live and free
on Seven and 7plus, with the highlights including:

• The Championships, which features eight Group 1 races across two action -packed Saturdays at Randwick on 2 April and 9 April 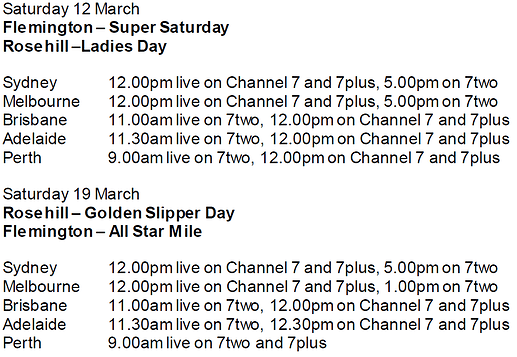 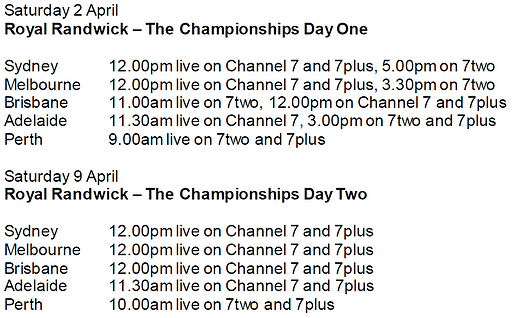 Considering Jelfs has been a contributor to Seven’s coverage over the last few years (and indeed the number of ‘guest’ presenting stints she’s had so far this year), it makes sense that the network has reached an agreement for her to ‘properly’ join them.

Sky Racing’s inability to reach an agreement with Jelfs last year (and her subsequent resignation) is Seven’s gain - especially because of the respect she has in the industry.

Star athletes set to shine on 7plus

The Seven Network’s coverage of Australian athletics is ready to step up another gear, as Athletics Australia and Seven announce a three-year streaming deal, commencing with the Australian Track and Field Championships this month, live, free and in HD* on 7plus.

Athletics is one of Australia’s most loved sports, with Australian track and field athletes featuring in six of the top 10 events on Seven during the Tokyo 2020 Olympic Games last year.

Australians will not miss any of the action at a national level, with Seven broadcasting the next three editions of the Australian Track and Field Championships.

Seven Melbourne Managing Director and Head of Network Sport, Lewis Martin, said: “We are very happy to extend our sports offering to include Australian athletics throughout the next three seasons on Seven, Your Home of Sport.

“During the Tokyo Olympics, we saw just how much Australians love getting behind our track and field athletes, and we cannot wait to deliver the excitement, the passion and the pure elation of our Aussie athletes, straight into living rooms across the country. All the action is just one click away on your smart TV, mobile, tablet or computer.”

“We were thrilled to see that there was such an appetite from Australian audiences for athletics during both the Australian Track and Field Championships and the Tokyo Olympics last year. We’re grateful that Seven sees the value of Australian athletics on screens in the lead up to both the 2022 Commonwealth Games and, of course, Paris 2024.

“We have no doubt Seven will help us reach new audiences and inspire more people to get involved in our sport, and we’re excited that through this long-term partnership, the country can get a taste of what’s to come from our sport.”

Seven’s broadcast of the Australian Track and Field Championships will begin with the first session of the Championships at 2.00pm AEDT on 26 March, live, free and in HD* on 7plus.