This is the place for clips related to Seven news and current affairs output over the years. Whether it’s Nightly News or 11AM, The Times or Real Life among others, look here.

I’ll start with my favourite Seven station from childhood trips, SAS Adelaide. This was always a station I admired for their reputation, their ratings and sheer brand dominance on the streets that I witnessed every time I visited.

For some reason, this is my favourite Seven News era. I just like the look and the feel of the sets and the presentation. I never saw this live, though.
3 Likes
TheMoreYouKnow August 27, 2019, 10:09am #3

Which makes sense given he never hosted it.

Seven News promos from my recordings in Sydney. Some favourites - not a Seven guy personally, but I only post stuff I like:

The Seven News Sydney promo for Ian Ross’ debut in the news chair in December 2003:

Within six months (or so) of Ross Symonds and Ann Sanders vacating their posts, the entire Seven News Sydney presenting line-up had been overhauled.

Mark Beretta remained in the sports chair until June 2004 when he moved to Sunrise, with Ten recruit Matthew White taking his place. Meantime, Nuala Hafner replaced Adam Digby, who finished up on the same day as Symonds and Sanders, at the start of 2004.

Personally I liked the Symonds/Sanders partnership and still recall watching their final bulletin together, but after years of running second-or-third fiddle to Nine and Ten, action had to be taken.

They were pretty painful. They weren’t really comfortable in the role of “co-anchor”. They were - especially Ross - trained as “readers” or solo presenters. It didn’t help that Seven Sydney had no idea either how to produce two readers together - either in the set arrangement or in studio shots. The entire station seemed uncomfortable with two newsreaders and it showed. This was in stark contrast - for example - with the examples I showed above - Seven Adelaide and Seven Perth especially, where co-anchoring and banter between hosts was not only second nature, but part of the station’s appeal and connection with viewers. I was always amazed by how long the anchors in Adelaide - not only Seven but also George Donikian and the Ten team and the NWS teams - would spend just chatting away compared to the Sydney bulletins. They were MUCH more homely in other cities.

Since then, Ann Sanders has flourished presenting solo. When Ian Ross took the weeknight chair, she moved to presenting Seven News Sydney on weekends before taking on her biggest role yet - presenting the national morning news, which she still does today, before later taking on the afternoon news.

As for Ross Symonds, he was never to be seen on television again, save for a guest appearance on The Daily Edition in 2016.

Ross Symonds these days is MC for the AWM

Don’t you think the main problem with Seven News Sydney during the Late 1990s/Early 2000s was the competition? The market had been so used to watching Nine over an extended period of time, that it took a former Nine newsreader to defect for Sydneysiders to “Make The Switch” during the mid 2000s!

that it took a former Nine newsreader to defect for Sydneysiders to “Make The Switch” during the mid 2000s!

To this extent, a former Today show newsreader too. When Ian Ross presented the news on Today, there was literally no competition with only children’s programming on the other channels the only respite.

The Ian Ross effect was also there to be seen in Brisbane, when his successor Sharyn Ghidella left Nine at the end of 2006 to take up the weekend newsreading position on Seven News Brisbane. That, and their poaching of John Schluter from Nine News Queensland, helped them become #1 in 2007 (that year Seven News won 33 out of 40 ratings weeks in SEQ).

Includes some supers too.

Interesting ad from the Sydney Sun-Herald from 23 March 1980: 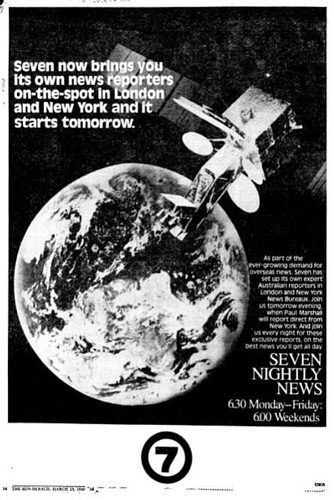 “Seven Nightly News”?? Even using a font that would not have looked out of place a decade later.

Haven’t seen that ad before but I do recall seeing it referred to as “Seven Nightly News” in guides I’ve browsed recently. I certainly don’t recall that branding as a child and we were a Roger Climpson household before they went to an hour bulletin in the mid ‘80s. Must’ve been very short lived.

Was this the beginning for our commercial station adding correspondents overseas? I’m assuming the ABC would have been the first to experiment with this setup.

Interesting that seven had their base in New York rather than Los Angeles.

Interesting that seven had their base in New York rather than Los Angeles.

It wasn’t until the population became celebrity obsessed that a Los Angeles bureau was opened. I have a vague memory of Seven having two North America correspondents during the late 1980s- one on the east coast reporting from New York/Washington DC and another in Los Angeles. Tony Coghlan, John Wiseman, Paul Marshall and Dixie Marshall are some of the names I remember reporting from North America during those years with Mike Barrett in the London bureau.

I think perhaps Seven reverted to the Seven National News name when the decision was made to add the local Seven Sydney News bulletin at 6pm. I can only find evidence that Seven Nightly News was used for five or six months during 1980.