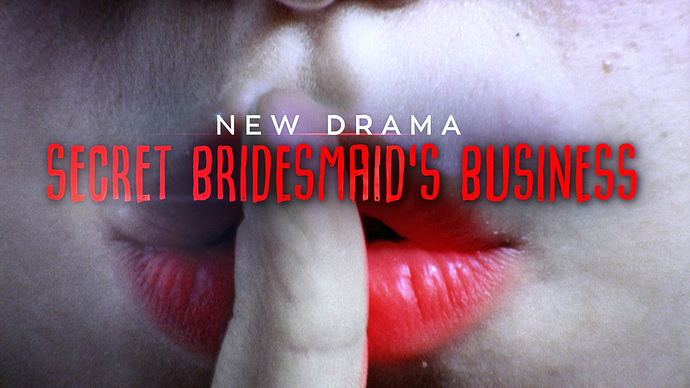 The lives of three friends are inextricably changed when one of them unwittingly invites a malevolent stranger into their world. A tangle of lies and laughter collides with a stalker’s chilling obsession in this contemporary adaptation of Elizabeth Coleman’s smash hit play. A celebration of female friendship reimagined as a high stakes thriller, SECRET BRIDESMAIDS’ BUSINESS will keep viewers on the edge of their seats. SECRET BRIDESMAIDS’ BUSINESS is a Seven Studios production.

Sounds like a similar premise to Bad Mothers on Nine.

Yet another drama focusing on a group of women. Yawn.

There must be value in chasing them. The series sounds interesting.

It was a play about 20 years ago made into a 90 minute telemovie by ABC in 2002. Must be adding content to stretch it into a series.

It was a play about 20 years ago made into a 90 minute telemovie by ABC in 2002. Must be adding content to stretch it into a series.

I thought it sounded familiar.

According to Seven’s Director of Network Programming, Angus Ross, it’s a 6 part miniseries. A thriller, a female-skewing, very adult series and very ambitious.

“Ambitious” seems to be the go to word for drama for Seven this year - much like “social experiment” for their reality TV.

They have an ambitious 30 hours of drama next year. Just think, less than a decade ago they had 40 episodes of All Saints alone in one year. Plus Rafters, plus City Homicide.

Just think, less than a decade ago they had 40 episodes of All Saints alone in one year. Plus Rafters, plus City Homicide

I really miss those days of Australian television.

Just think, less than a decade ago they had 40 episodes of All Saints alone in one year. Plus Rafters, plus City Homicide

I really miss those days of Australian television.

If you were old enough, like J Bar & myself, you’d remember that dramas like Prisoner & A Country Practice had 2 episodes per week over 40 weeks.

If you were old enough, like J Bar & myself, you’d remember that dramas like Prisoner & A Country Practice had 2 episodes per week over 40 weeks

I do remember them all well also including Cop Shop, Sons & Daughters, The Young Doctors all my favourites back then.

Just think, less than a decade ago they had 40 episodes of All Saints alone in one year. Plus Rafters, plus City Homicide.

That was what made them competitive against Nine. Without those dramas Seven wouldn’t even beat Ten.

Actually it was News Corp who revealed the cast in today’s metropolitan papers.
It will be the first Australian drama for Katie McGrath (also known for her role of Morgana in Merlin).

The Secret is out… Abbie Cornish, Katie McGrath and Georgina Haig headline

Seven Studios developed Secret Bridesmaids’ Business as a pivotal drama in its development strategy to produce high quality series for the Australian and international markets.

A bride’s perfect wedding turns deadly after one of her bridesmaids unknowingly invites a malevolent stranger into their lives, triggering a deadly chain reaction that blows open a hidden world of secrets. As the thriller series unfolds, the power of female friendship could be the difference between life and death.

Abbie Cornish plays Melanie. Mother, wife, with a successful career and a beautiful home…. To family and friends, it appears she has an idyllic life. However, when her life choices are put to the test by some harsh home truths, her ideal world starts to spiral out of control. “There is a sharp dichotomy between Melanie’s seemingly perfect suburban life with a happy marriage and wonderful children versus her increasing ventures into the unknown and often dangerous. From the first moment, I was drawn to Melanie’s complexities as a mid-30’s woman whose concerns, stresses, and priorities are eerily relevant to suburban life. Hers is a story begging to be told,” Abbie said.

Katie McGrath is Saskia. A fast-rising lawyer and an arresting, high-octane British truth-bomb. She is relentlessly intelligent and fiercely loyal. An assured, wildly-independent bisexual, Saskia defies pigeonholing and holds a secret that could mean the end of friendship with her best mate, Olivia. “I love the core friendship of the three very different women. Each woman is strong in her own way, but knows how to be vulnerable with their friends,” said Katie.

Georgina Haig plays Olivia. Her near-death experience with leukaemia has made her determined to follow her dreams. Olivia is vibrant, witty and an optimist. When she discovers something very dark about a loved one, it drives her to bury her own secret to protect those around her. “Olivia is a grounded optimist who tries to be less vulnerable than she is, because she wears her heart on her sleeve but wishes she didn’t so much. She’s tough one minute then crumbling the next,” said Georgina.

Seven Studios CEO., Therese Hegarty said: “Securing such an outstanding cast is testament to the story-telling and craftsmanship of superb scripts that blend secrets, lies, wit and compelling friendships. We are truly delighted that our talented creative team will bring this drama to Australian and international audiences.”

Principal production investment is from Film Victoria. Film Victoria CEO, Caroline Pitcher said: “ Secret Bridesmaids’ Business is a Victorian Original production. We’re excited that Seven Studios Scripted are launching their exciting slate of projects with a Victorian-based story that will showcase our stunning Mornington Peninsula region and the incredible talents of our state’s creatives and crew.”

Filming locations span from the scenic Mornington Peninsula wine region to distinctive locations in the heart of the City of Melbourne. Remarkably similar to one seen 3 posts above

Just saw a promo for this… looks great!!!