Each week presenters Stephanie Bendixsen (@Hexsteph) and Nich Richardson (@Nichboy) cover the latest and greatest in esports and gaming – the latest news, reviews, livestreams, gameplays, interviews, cosplay, and so much more.

In addition to all things gaming, screenPLAY will deliver everything you need to know about esports with our leading esports partners from around the world. Further announcements on screenPLAY’s focus on esports will be released in the coming weeks, including the launch of our very own screenPLAY league.

When it comes to gaming and esports, screenPLAY will be at the heart of the hub, bringing unique daily content to its Australian audience.

Stephanie Bendixsen and Nich Richardson join the Seven family in their roles as hosts of screenPLAY and are looking forward to sharing their knowledge and love of video gaming. Steph and Nich will also be joined weekly by screenPLAY esports experts.

“Building a community that shares our passion for video games where we can openly chat, stream, play and have fun is ultimately what we’re about,” says Steph.

“I’m thrilled to be part of Channel Seven as we take this next step forward together to create something special for the Australian video gamer,” says Nich.

Stephanie joined ABCTV’s Good Game in 2009 as its first full-time female presenter, along with its companion show for younger gamers, Spawn Point. She has since become a well-known presence in the industry, championing the positive representation of women in video games.

In 2011 Nich started The Roast, an online satirical news show for Fairfax and joined Good Game as host of their digital show Pocket, as well as regularly filling in alongside Steph on Good Game.

screenPLAY debuts on 7mate in the coming weeks and launches online at screenPLAY.seven on Monday, June 19.

At 10PM according to TV Tonight…

Looks if it’s in the graveyard slot already…

They bloody stole my idea

The Australian Financial Review reports St George Bank will be the show’s new foundation partner. St George has been an active supporter of esports in Australia since 2016. Seven and St George will launch a new screenPLAY league with two games in coming weeks.

Looks if it’s in the graveyard slot already…

In amongst seven episodes of the Big Bang Theory too

Seven today details plans for the rapid expansion and development of screenPLAY, the company’s omni-channel move into esports and gaming. Seven also confirms its key relationship with St.George Bank as foundation screenPLAY partner.

screenPLAY marks the first major support of esports by an Australian commercial media network. Seven is partnering with the leading esports publishers and organisations to deliver the latest and greatest esports content for the Australian gaming community. Further announcements on screenPLAY’s focus on esports will be released in the coming weeks, including the launch of Seven’s very own screenPLAY league.

Commenting, Kurt Burnette, Seven’s Chief Revenue Officer, said: “This is the next stage of a long-term strategic rollout, utilising Seven West Media’s market-leading expertise in creating and distributing content. screenPLAY is already creating an authentic connection direct to the esport and gaming community in a way never seen before in this country. screenPLAY creates relevant, premium content and influencers, and aggregates this into actionable data and analytics for both our advertising partners and Seven West Media to further leverage.”

Joining Seven in supporting esports and gaming is foundational screenPLAY partner St.George. St.George was the first financial institution in Australia to support esports in 2016 and will continue to extend its support of the community through this partnership with screenPLAY.

Ross Miller, St.George General Manager for Retail Banking, said: “We’re really excited to partner with Seven and support a growing industry that Aussie families enjoy. St.George has a long history of supporting community sports and esports is no different. We’re proud to be the first bank in Australia to back esports and help take it to the next level.”

Brad Timmins, Seven’s Integrated Strategy Director, adds: “We couldn’t be more excited to partner with St.George in growing esports and gaming here in Australia. We have been extremely impressed with St.George’s dedication and authenticity, and absolute focus on this vibrant community. We believe they will be a strong partner for screenPLAY in pushing esports and gaming more into the popular mainstream to significantly increase the opportunities for Australian gamers.”

“Video games, and esports more specifically, is the exciting coming together of technology, media, sport, entertainment and ‘total video’ – all part of Seven’s core and ongoing strategic focus,” says Seven’s Chief Digital Officer, Clive Dickens. “In many ways this also represents a new, predominantly millennial audience for Seven – digital and social media natives as opposed to linear TV consumers – but one which we greatly look forward to serving directly through our exciting screenPLAY platform.”

Something live and with a bit of energy would be nice.

Folks, watch it in HD on Prime…

So far, the online content has been great. Graphics, logos are all nice and fresh, not that it matters content wise, but I see this being a success. Same as Good Game, I think this show will be a hidden gem. Not sure about the 10pm start though, I much prefer and think 9pm is more acceptable.

It’s good to see Seven kinda branching out and focusing more on online here, no doubt the hosts would’ve had a say in it (I read somewhere they have complete editorial control on what they do in the programme?).

I still can’t help but think this will be judged traditionally, in ratings though. I can’t say I’m surprised they would put it on in a late time slot (sandwiched amongst SEVEN BLOODY TBBT repeats no less), technology shows on FTA have never been treated like they should. I’ll be watching though, and hope it succeeds!

Thoughts for those who watched?
I personally wasn’t impressed.
Felt rushed and the format didn’t gel well
Hope it evolves. but I don’t think I’ll watch it again

I think they could tinker with it, but all up I think it could work really well

screenPLAY delivers across all platforms

screenPLAY, Seven’s omni-channel move into esports and gaming, is scoring across all screens including mobile, social, web and broadcast with fans consuming screenPLAY across multiple screens and actively engaging with our eSports content.

It then goes onto ratings.

The show ranked 65th for the night on multi channel programs in total people. Its best demographic result was in 18-49 where it ranked 11th.

At the end of last episode, they referenced that next week they’ll have a new set. I don’t know why though, as the set is 2 episodes old and is pretty decent. Will be interesting

I think they are just replacing the table. Social media have been making fun of it saying it’s a outdoor setting. 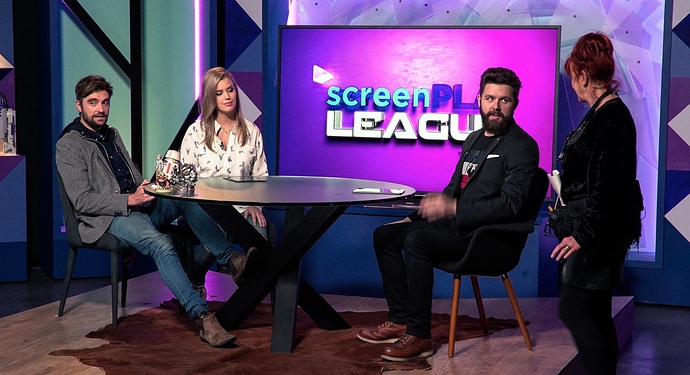 Along with the table, they seem to have lost the fourth presenter from the first week.

What was it like before? Anyone know where this is filmed?

Old one. It looks like only the top changed. 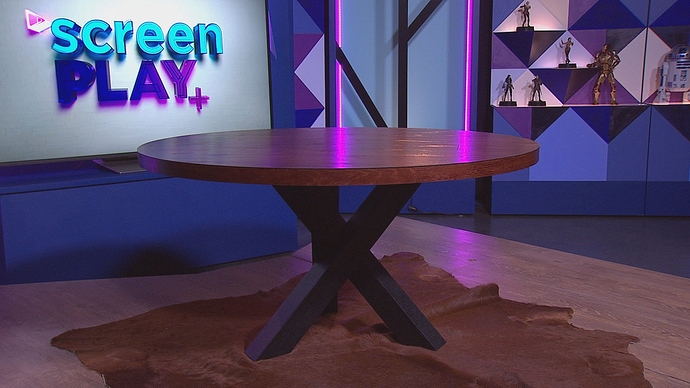 I read an article that the set contains a disused cinema, this was featured last night. The cinema is small, but what show did this come from?

Surprised with the table / chairs / rug they’ve gone for here. Not sure what it looks like on-air but would’ve thought they would have gone for a more The Daily Edition looking desk to suit the audience, graphics package and the back of their set.

screenPLAY will show the esports Overwatch World Cup Group Stage: Sydney event live this Sunday, as part of a new partnership between Blizzard Entertainment and Seven West Media. The group match between Australia and Sweden will air on 7mate at 11.30am-12.30pm AEST. The esports tournament began today at The Star Event Centre and limited tickets are still available at the gate for Saturday and Sunday.